A Legal And Ethical Audit of Continental Bank and Trust

The primary subject matter of this case concerns the legal and ethical issues involved when a company defrauds its own customers. It provides students with the opportunity to act as a corporate attorney also serving in the role of an ombudsman (Volvok 2013). Students must consult state and federal consumer protection and banking laws. Students should also consider the ethical issues involved as well as the effect on the bank’s brand and consumer confidence in the bank. This case has a difficulty level of four or five and is appropriate for undergraduate or graduate business law classes where business law and ethics are covered. This case is suitable for both classroom and online discussion and as an individual or team assignment. The case is brief enough to be covered in a single class period. Ideally, it would be discussed and assigned during one class period and then completed during the next class period. That would allow the students out of class time to consider and study the issues involved.

This case is loosely based on recent banking scandals, one of which involved millions of customer accounts which were fraudulently opened without the consent or knowledge of those customers (Tayan, 2019). Students will be placed in the role of corporate attorneys acting in the role of an ombudsman. They will be tasked with investigating the nature and extent of the fraud and determining the appropriate action to take in response. They will also be asked to evaluate how such issues can be prevented in the future.

Imagine yourself in the role of corporate attorney and ombudsman for Continental Bank and Trust. Bank executives were aggressively pushing employees to open more accounts for its existing customers. This practice, called cross-selling, led to increased profits for Continental (Hayes, 2019). Continental has been implicated in a scandal where bank employees were opening millions of consumer accounts without authorization from or knowledge of those consumers.

Federal and state regulators are conducting active investigations of Continental’s business practices. Continental has assigned you to conduct an internal investigation into how this was allowed to happen, who is responsible, and what remedial actions should be taken. In doing so, you are asked to evaluate the bank’s activities in light of state and federal laws and regulation, from such areas as banking, consumer protection, common law fraud, and unfair and deceptive trade practices. You should also consider how Continental can prevent such practices from being a problem in the future.

You have worked for the bank for five years and specialize in conducting investigations of fraud and misconduct. Your assignment comes directly from Continental’s Chief Executive, at the request of the Board of Directors. Your experience has been focused on investigating customers, vendors, and other institutions suspected of fraud. Now your task is to turn those same skills on the bank you work for.

You interviewed 25 employees of the bank and 17 bank customers who had accounts fraudulently opened at the bank. You also reviewed hundreds of thousands of pages of evidence, documenting when the practice of opening fraudulent accounts began, how the practice developed and grew, who knew about it and when they found out, and what, if anything, they did about it. The chart below represents the summary of your findings, with percentages of members from each group that directly engaged in fraud, were aware of the fraud, had no idea of the fraud, and who were disciplined or terminated due to the bank’s fraudulent business practices.

The retail employees you spoke to were emotional and defensive about what they did. They simply did not feel they had a choice (Figure 1). For some of them this was a first job and they were told this was how things worked. For others, their economic circumstances made them feel trapped. In some cases, they were required to open more accounts each day than the number of customers that visited the branch. Two of the employees you spoke with were single mothers and feared that without a paycheck they would quickly become homeless and unable to care for their children (Claassen, 2015). 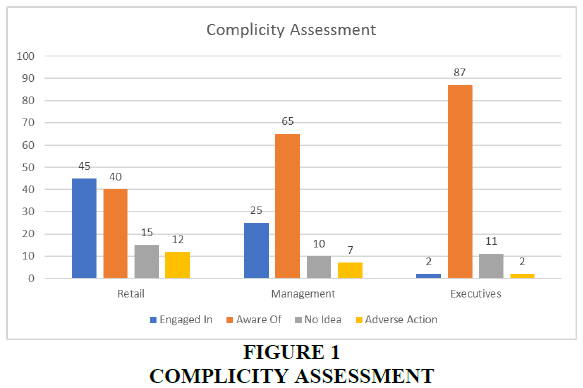 The branch managers you spoke with also felt stuck. They were subjected to daily sales calls, where enormous pressure was brought to bear on them to deliver numbers. These calls involved a lot of shouting and threats. One manager described sales calls where the Head of the Retail Division told the dozens of managers on the call that if they couldn’t deliver, she would find someone who could. She added that if she had to replace them, she would ensure they never worked in the banking industry again.

The executives you spoke with seemed detached, defensive, and strangely ambivalent about what happened. They didn’t seem to think they had done anything wrong and insisted that these practices are common in the industry. They felt Continental had been wrongly targeted and singled out. They had received millions of dollars in bonuses as a result of the widespread fraud and seemed mostly concerned they may have to return some of those bonuses.

You have concluded that Continental placed an excessive amount of pressure on the retail division to open accounts. Excessive pressure to perform can make individuals feel as if they have no choice but to cut corners and engage in fraud (Mintz, 2018). There was a lack of checks and balances which created an excessive moral hazard (Classen, 2015). The goals that were set were unrealistic and often unattainable. Those who met or exceeded the goals were handsomely rewarded. Those who did not were threatened, disciplined, and terminated. Continental placed far too little emphasis on ethics training and on finding and detecting fraud. Companies must have robust internal programs to detect fraud and other unethical or illegal conduct (Peng, 2013). Those who should have been tasked with noticing there was a problem and doing something about it were instead incentivized to look the other way and allow these fraudulent business practices to continue. Continental incentivized fraud and disincentivized reporting or exposing that fraud, choosing to align rewards with profitable but unethical behavior (Kerr, 2014). There was no one these problems could reasonably have been reported to who was not profiting as a result. In addition, as these practices continued and became more widespread, reporting the ongoing fraud would involve reporting on one’s friends and colleagues. The pressure on those who resisted the temptation to cheat to participate in or at least ignore the fraud occurring all around them was extreme. Peer pressure is a known motivator for fraud (Kassem, 2012). Ethical lapses and a lack of ethical leadership can lead to a collapse of an organization’s ethical culture (Blackman, 2018).

A part of your assignment is to provide recommendations to the CEO and Board of Directors about how to design and implement a robust ethics training program. In doing so, you are considering whether such a program should be focused on instrumental ethics, virtue ethics, or a hybrid or middle-ground model (Vasudev, 2015). Instrumental ethics is focused on a free-market model and the assumption that financial gain can provide the needed incentive for ethical behavior. Virtue ethics is based on ethical behavior being an end in itself and individuals doing the right thing simply because it is the right thing. A middle-ground approach would seek to use elements of both schools of thought in designing an ethical system. For example, such training could teach employees about ethical behavior and then provide financial incentives to behave ethically and disincentives to engage in dishonest or unethical conduct.

1. In light of state and federal laws and regulation, from such areas as banking, consumer protection, common law fraud, and unfair and deceptive trade practices, what types of legal issues can the bank expect to face as a result of this?

2. How should Continental deal with the wrongdoing of members from the following groups:

3. Should Continental attempt to claw back bonuses given to employees as a result of their fraudulent behavior? How should it determine which employees should have to return those bonuses?

4. How should Continental attempt to make things right with employees who were fired for refusing to engage in fraud or being unable to meet such aggressive sales goals?

5. How could Continental adjust compensation and bonuses to discourage fraud and encourage ethical behavior? How can the company avoid moral hazard and align employee compensation with the values it seeks to promote?

6. How should Continental attempt to rebuild trust with its customers and federal and state banking regulators?

7. What steps can Continental take to build a more ethical business culture and to prevent this from happening again? Should these efforts involve more training, enhanced oversight, or both? Should the focus of such ethics training be on instrumental ethics, virtue ethics, or a middle ground?

This case study is means to incorporate elements from recent corporate and banking scandals. There was once a company called Continental Bank & Trust, but it ceased to exist following a merger in 1948. The Continental Bank and Trust referenced herein is a fictional entity. Any resemblance between it and any other company is purely coincidental.

Blackman, A. (2018) “What is Ethical Leadership? How to Be a More Ethical Leader,” Envato Tuts+, https://business.tutsplus.com/tutorials/what-is-ethical-leadership--cms-31780,

Peng, L. (2013). The importance of fraud detection techniques from the Enron case and the TJ Maxx data breach.

Mintz, S. (2018) “Fraud in Organizations”. Global Study on Occupational Fraud and Abuse: Report to the Nations.