The author presents a study case of Tobacco Industry branding strategy after Government Regulation of Republic Indonesia number 109 of 2012 Article 36, which prohibit tobacco company to show their brand name and logo in their sponsored activities advertisements. The purpose of this study is to find out the possibilities of some brand identities absence while still maintain its brand equity to audiences. This study use Go Ahead Challenge poster from 2014 until 2017 that sponsored by Sampoerna A Mild cigarettes brand but doesn’t show those tobacco company brand name and logo. The visual identification system of Go Ahead Challenge poster itself shows similarities with Sampoerna A Mild brand identities, like symbols, color, typography and logo-mark and it reflected their audiences

Based on the survey from Tirto.id, state revenues from tobacco excise continue to increase each year. From 2015 until 2016, it was noted that the increase in state income had increased above 10 trillion. Even though the tobacco cigarette industry has provided quite a lot of excise tax on state revenues, the government seems to continue to limit cigarette industry promotion activities along with the increasing awareness of a healthy lifestyle (Figure 1). 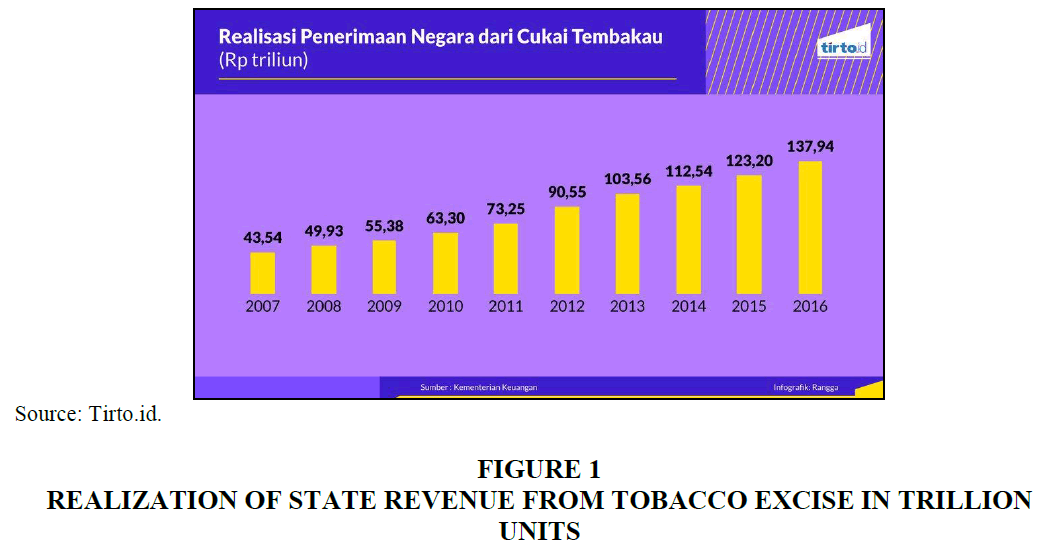 The realization of the government's commitment to control the cigarette industry in its promotional activities reflected on Government Regulation of the Republic of Indonesia Number 109 of 2012 article 36, which reads:

2. Sponsors, as referred to in paragraph (1), are prohibited for the activities of institutions and/or individuals covered by the media.

Based on the regulations above, cigarette companies cannot display logos and brand names on the sponsored activities, including publications such as posters, video, billboards and so on. Meanwhile, brand names and logos are very important to brand visualizations, considering these two things are a bridge between consumer perceptions and company values. Therefore, to reach successful brand equity, Tobacco Company must look for a brand strategy that still presents its brand value without showing their brand name and logo.

This study aims to analyze the visual strategy of “Go Ahead Challenge” posters which doesn’t contain any logo and brand name of “Sampoerna A Mild” Tobacco Company, yet still reflect its company branding. The posters that are used for this research derived from their website (goaheadpeople.id) that contains information about their activity from 2014 until 2017 (Figure 2). 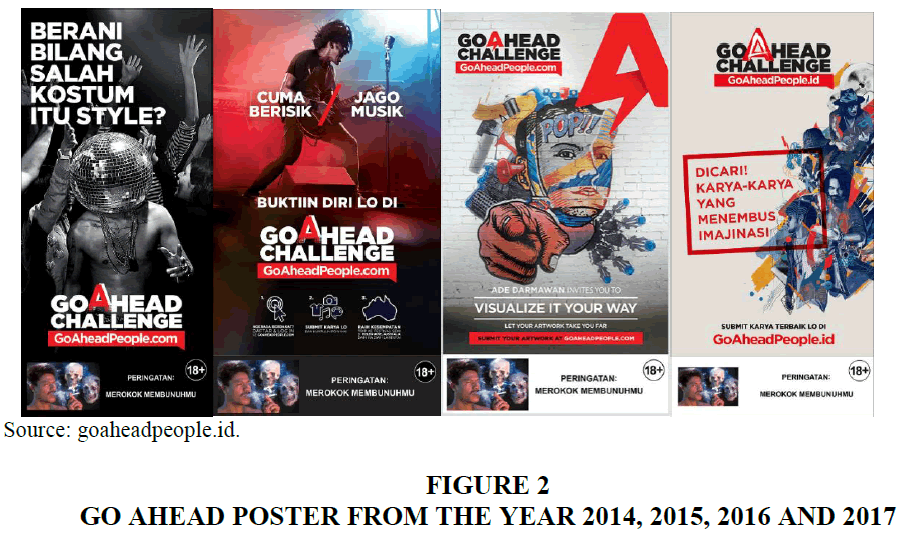 Go Ahead Challenge poster visual identification system contains elements like typography, logotype, symbol and color. Topalian (1984) remarks that those visual identification systems should reflect closely to their corporate identity to maintain their brand equity. This research will look those visual elements as a Go Ahead campaign method to reach “Sampoerna A Mild” brand equity and makes their audiences aware of company’s involvement on Go Ahead campaign without displaying their logo and brand name.

Brand is a method to connect companies and consumers emotionally which affect their success (Hembree, 2011), while visual communication like logo is a combining word, writing and aesthetic images, so that it connects with the audience and presents related information (Wheeler, 2009). Budellman (2010) argues that a logo is an image that represents a collective thought of an experience that shapes a person's perception of the organization he meets. While the brand identity is deeper than the logo, which involves the colors used on the company envelope, ring tones used by each customer they call and so on and makes consumers perceive the brand image.

Audiences must be convinced with branding elements that can be recognized and familiar. This can be achieved through the commitment of central ideas and have the capacity to go beyond times (Wheeler, 2009). For some companies, logo is arguably something that is mandatory. Even some companies consider that the logo is the most important thing on brand. In fact, the logo itself does not mean anything if the brand image is not strong. Good brands are formed from internal and external factors of the company's image. A good logo will be the embodiment of the brand image (Hollamby, 2018).

“GO AHEAD” AND “SAMPOERNA A MILD” BRAND SIMILARITIES 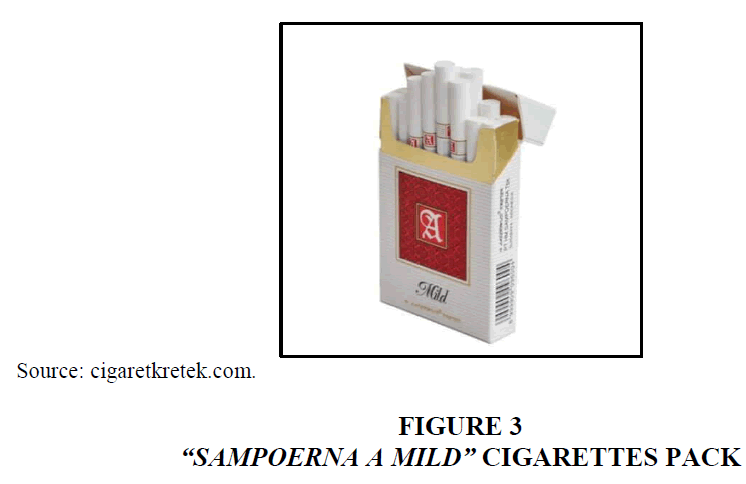 In 2009, “Sampoerna A Mild” launched a campaign called Go Ahead, which is a forum for the adult smoker community. 5 years later, “Go Ahead” launches an annual sub-campaign based on the goaheadpeople.id website. The sub-campaign is an art competition that offers opportunities to the winners to exhibit their work on public, which named “Go Ahead” Challenge (Figure 4).

Based on their website, Go Ahead competition has four main posters that contain information about their competition. Each poster has different form of illustration yet same messages. The illustration itself reflect “Sampoerna A Mild” audiences that’s young adult, which commonly can be seen on other “Sampoerna A Mild” advertisements that talk about youth culture and social issues.

On 2014 poster, the illustration shows topless guy surrounded by other people that look like partying, who wearing disco ball on his head with a tagline “Dare to say that wrong dress code is a style?” Meanwhile, on the 2015 poster, the image show male guitarist that looks passionate with a tagline “Just noisy/Music expert, prove yourself in”. On 2016, it shows graffiti-like illustration with wall background that said: “Ade Darmawan invites you to visualize it your way, let your artwork take you far”. On 2017 poster, it shows an illustration of 4 guys that represent each creative sector (music, photography, visual art and fashion/style) with the tagline “Wanted!! Artworks that can beyond imagination”. Those illustrations matched with “Sampoerna A Mild” customer that’s a male young adult proved with only using a male person as a model on those posters.

Color is often the fastest way for consumers to analyze brand identity (Gains, 2014) and one way to express visual identity (Jenkins, 1991). Even though the form and shape of “A” letter are changes between “Sampoerna A Mild logo” and almost every poster, but the similarities between letter “A” in “Go Ahead Challenge” and A in Sampoerna cigarette pack still founded. Those lettermarks still using a combination of red and white. Compared with other text in “Go Ahead Challenge” (Figure 5), letter A is the only font that has a different style which always using red color. In addition, the importance of letter A definitely can be seen on the 2016 poster. Those A lettermark displayed again in the right corner and enlarged.

Figure 5: Sampoerna A Mild Logo In And Letter A In The Go Ahead Challenge Text

The use of red color as a marker of the brand “Sampoerna A Mild” is also used in various advertising media. Consistency to use red letters A is done to achieve brand continuity. Strong brand identity is formed from the consistency of the brand on the formation of consumer perceptions. Involvement of all relevant promotional mixes with the aim of uniting, simplifying and strengthening brands (Gains, 2014) (Figure 6). 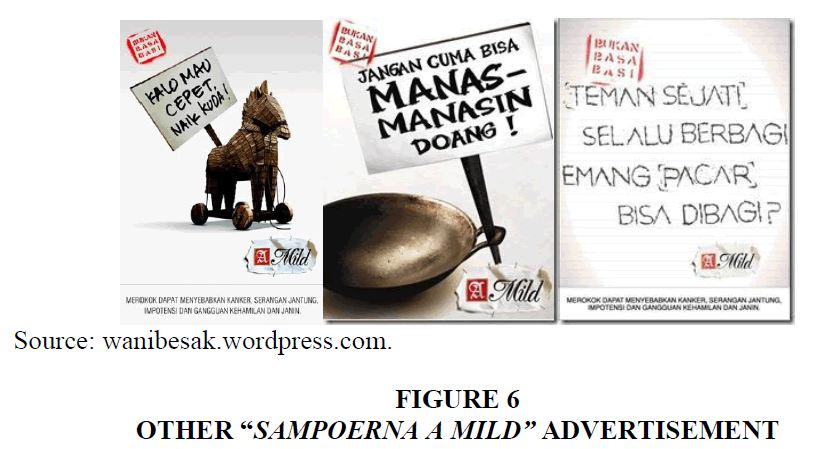 Figure 6: Other “Sampoerna A Mild” Advertisement

The idea of logo and brand name absence in branding itself need further research. This case study shows that “Sampoerna A Mild” effort to represent their company through Go Ahead Challenge poster can be accomplished with using “Sampoerna A Mild” brand identities like color, illustration style and symbol. The consistency of visual identities can affect how successful those brand to reach their audiences, even without using their brand name and logo on advertisements media

Hollamby, J. (2018). Forget about your f**king logo. Nobody cares. Retrieved from https://medium.com/design-domain/forget-about-your-fucking-logo-nobody-cares-c5e92c12730

Topalian, A. (1984). Corporate identity: Beyond the visual overstatements. International Journal of Advertising, 3(1), 55-62.