Broiler Livestock Business Based on Partnership Cooperation in Indonesia: The Assessment of Opportunities and Business Developments

The need of chickenfor the fulfillment of animal protein has an impact on increasing public consumption of chicken, with an average growth of 17.64%, in 2017 the consumption of chicken reaches 0.744 kg/capita/year (Ministry of Agriculture of the Republic of Indonesia, 2017). Thus, the average price of broilers at the consumer level reaches Rp 33,334/kg (Directorate General of Animal Husbandry and Animal Health, 2017). Efficient price integration policies should be established so that the price gaps between consumer and producer levels are acceptable (Setianti et al., 2016). Therefore, the poultry industry experiences a population increase of 6.82% or as much as 1.69 billion tails in line with the partnership between livestock companies and farmers. Animal husbandry business partnership in Indonesia has been regulated in the Minister of Agriculture Regulation of the Republic of Indonesia Number 13/PERMENTAN / PK.240 / 5/2017 concerning Livestock Business Partnership and Republic of Indonesia Government Regulation Number 44 of 1997 concerning Partnerships.

The principle of partnership cooperation in Indonesia is mutual need, mutual reinforcement, and mutual benefit between the parties that carry out business cooperation, including broiler livestock business with partnerships between livestock companies and farmers.

The partnership partnership in reality does not always strengthen and mutually benefit each other. Many breeders have suffered losses because of the bargaining position of low farmers, which has an effect on the sustainability of broiler livestock business and the development of broiler livestock businesses. The low bargaining power of farmers is because most production factor inputs are obtained from livestock companies, whereas production factor inputs simultaneously have a significant effect on farmers' profits (Haloho et al., 2013), while character, capacity, and conditions do not significantly affect farmer credit returns (Prasetyo et al., 2012), although the return of 5% livestock business credit will still be declared profitable when the profitability of livestock business reaches 10.34% (Dolewikou et al., 2016).

Partnership collaboration has an impact on farmers' access to resources (Mukson et al., 2017) to support agribusiness subsystems which include preproduction, marketing, and supporting services (Prasetyo et al., 2012) because the broiler livestock business partnerships are said to be feasible technical, organizational, and financial factors (Arrienda et al., 2010). Mukson et al. (2012) stated that the role of technical, social, economic, institutional, and business environment factors needs to be considered in an effort to increase business productivity and farmer income. These technical factors according to Perilla et al. (2009), among others, make their own nurseries as an initial investment step and to reduce adipocyte proliferation (Sugiharto et al., 2010), whereas according to Sumekar et al. (2013) stated that technical factors for livestock population, feed management, and mastery of breeders' technology were not optimal.

Broiler livestock business with partnership cooperation enables farmers to be able to expand the chicken marketing management by optimizing the length of fattening time. Optimization of fattening time needs to be done to increase farmer's income (Setiawan et al., 2013). Therefore, government involvement is needed to encourage the growth of the poultry industry, exploit potential new areas, and update legislation to preserve the environment. Potential investors must be encouraged to overcome price volatility (Indarsih et al., 2010).

The study was conducted in Malang Regency, East Java Province, Indonesia from January to August 2018. Farmer data was obtained from 33 sub-districts in Malang Regency. Respondents were broiler breeders in partnership systems (total sampling). The number of respondents is 126 breeders. Data are obtained using questionnaires, interviews, and observations. The Likert scale 1 to 5 is utilized to fill the questionnaires.

Data are analyzed using the Structural Equation Model (SEM) with SmartPLS. SmartPLS is used because it is useful to strengthen weak theories and / or find a new theory (Wiyono, 2011). The specification of the relationship between latent variables and indicators in Partial Least Square (PLS) theory is called the measurement model or outer relation. Mathematically, determining the value of outer loading on the reflective indicator is as follows:

x and y are indicators for exogenous latent variables (ξ) and endogenous (η), while Λx and Λy are loading matrices that illustrate simple regression coefficients that connect latent variables to their indicators. Residuals are measured by ϵx and ϵy which can be interpreted as measurement errors.

PLS is designed for recursive models. Moreover, the relationship between latent variables applies that each dependent latent variable η can be specified as follows:

Weigth Relations (WR) is the estimation of the case values of the latent variables, inner models, and outer models that provide specifications, so as to provide estimates of weight relation in the following logarithmic equation:

Resources are a potential value that is owned by institutions or individuals that can be accessed and a continuing processes in their lives. The potential of these resources is obtained from the access of broiler breeders to the partnership system of various resources. These resources include financial, technological, physical, economic, environmental and social resources (Syukur et al., 2014).

The access to these resources is obtained from the results of tests using SmartPLS (Figure 1). Resources that can be accessed are resources that have the value of outer loading> 0.500 and declared valid, while the value of outer loading <0.500 is regarded as invalid and must be removed from the model because it does not support latent variables. Access to broiler breeders in partnership with resources is explained in Table 2 below: 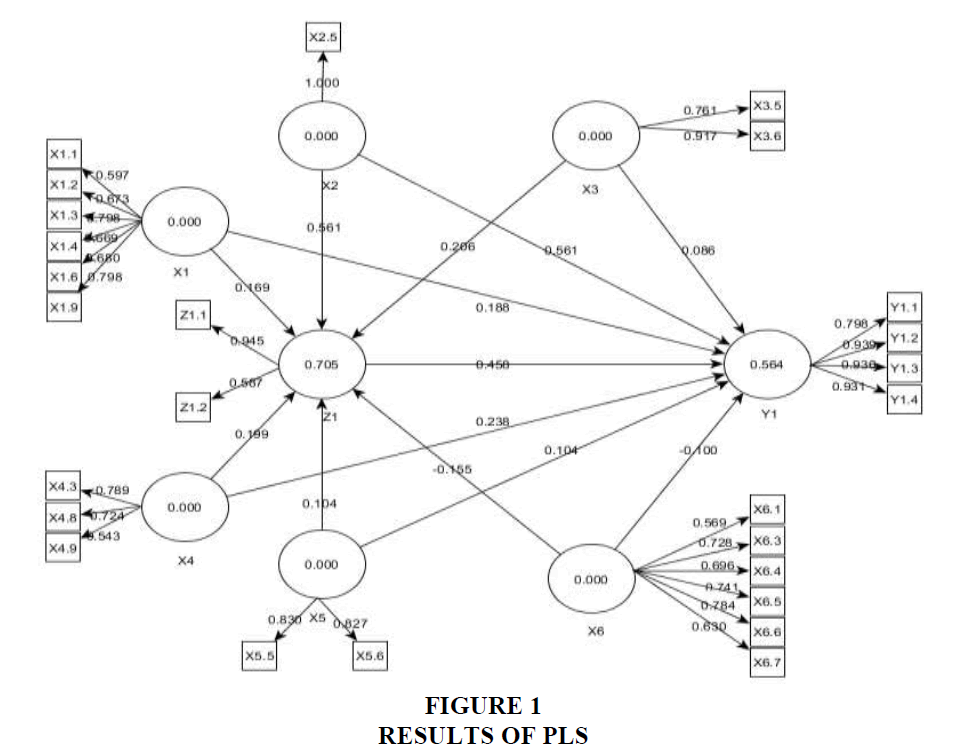 Financial, technological, physical and economic resources have a significant positive effect on human resources. Therefore, access of broiler breeders to the partnership system of financial, technological, physical and economic resources directly affects the human resources of breeders. Broiler breedings under partnership system in Indonesia has a significant positive effect on livestock business development. This shows that the higher human resources of breeders, the chances of farmers in developing livestock businesses are also getting increased. Roessali et al. (2011) states that family carrying capacity can influence farmers' decisions to increase the scale of their business (Table 3).

Access to resources for farmers and the quality of Human Resources (HR) affect the development of broiler livestock business partnership systems in Malang Regency by 56.4%, while the remaining 43.6% is influenced by other factors not found in the model depicted in Figure 2. Ellitan (2003) states that the performance of HR and technology is influenced positively and/or negatively by accessibility to resources. 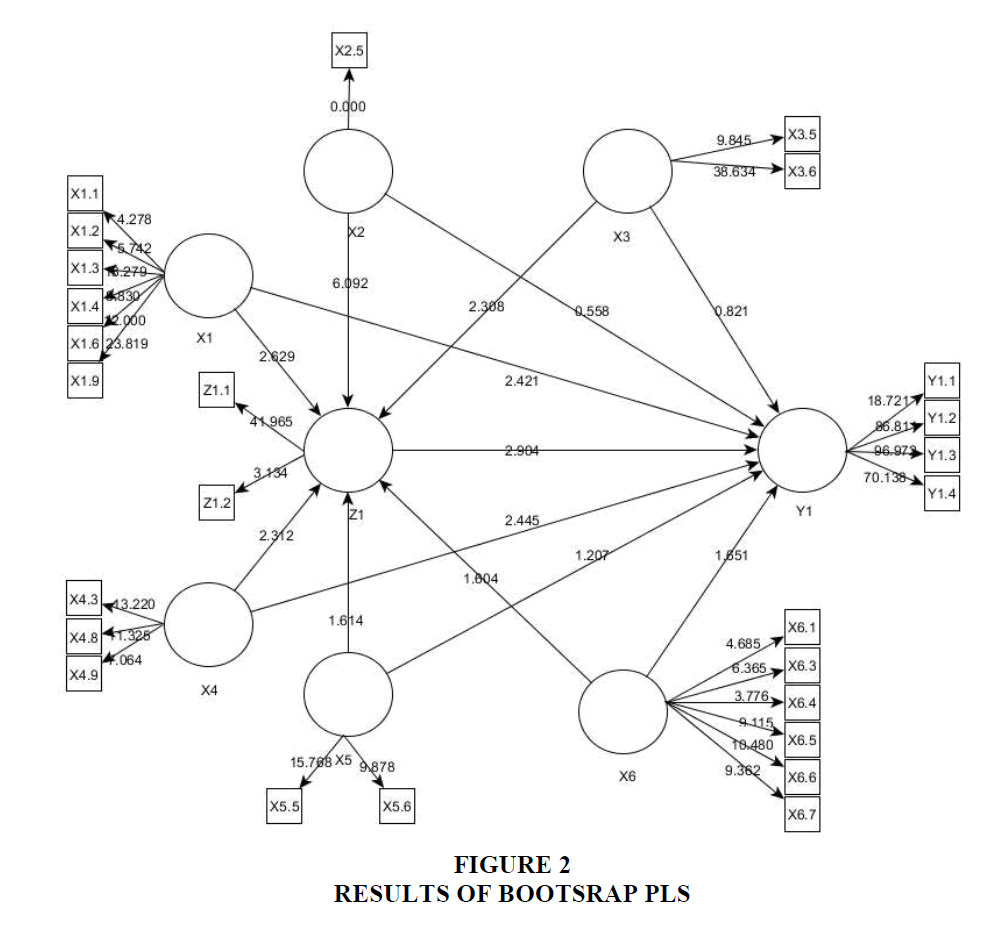 The total effect of technology resources to breeders and business development has a significant positive effect of 19.2%. This is supported by technological resources that have a significant positive influence on breeders' HR, but not significantly assessed on business development. This means that without quality human resources, technological resources cannot guarantee the development of broiler livestock business partnership systems in Indonesia. Technology and HR performance are influenced positively and / or negatively by the availability of resources (Ellitan, 2003). This shows that farmers' access to resources can strengthen or weaken the influence of technology on HR performance. Yudiarini (2014) explains that facilities and infrastructure can guarantee the efficiency of livestock business, while at the location of research facilities and infrastructure production is the responsibility of the company.

The total effect of economic resources to breeders and business development has a significant positive effect of 32.9%. This is supported by economic resources that have a significant positive influence on livestock breeders and the development of broiler livestock business partnership systems in Indonesia. It shows that if farmers are getting richer, higher education, and have more motivations then it impacts on the farmers' decision to increase the business scale because of the support from labor with family ties (Roessali et al., 2011).

The total effect of environmental resources to breeders and business development has a significant positive effect of 15.4%. This is supported by environmental resources that have a significant positive effect on breeders' HR, but not significant on business development. This means that without quality human resources, environmental resources cannot guarantee the development of broiler livestock business partnership systems in Indonesia. Amam and Soetriono (2019) stated that livestock business development must be supported by various production facilities (resources), one of which is access to animal feed. Utilization of agricultural waste for feed and utilization of livestock manure for organic fertilizer fortified with chemical fertilizers has been shown to increase crop productivity by 39-48% (Bamualim et al., 2015), besides that farmers can also make cost efficiency on production for animal feed (Pakage et al., 2015).

The results of the correlation analysis or latent variable correlation of the partnership model development of broiler livestock systems are described in Table 4 below:

Ellitan, L. (2003). The Role of Resources in Increasing the Effect of Technology on Productivity. Journal of Management & Entrepreneurship, 5(2), 155-170.

Fauzi, A., Suharjo, B., & dan Syamsun, M. (2016). The Effect of Financial Resources, Intangible Assets, and Competitive Advantage that Implies the Performance of Micro, Small and Medium Enterprises in Lombok, NTB. Manajemen IKM, 11(2), 151-158.