CJ Group, a parent company of CJ Freshway, is an influential conglomerate in Korea. The vision of CJ Group is as following: “Create a new culture, for healthy, happy and convenient lifestyles”. It has 14 affiliates with wide coverage from food, media, entertainment sectors, and culture.

CJ, which stands for Cheil-Jedang, was originally a sugar manufacturing company founded by Byungchul Lee as a division of Samsung Trading in 1953. Cheil-Jedang was quite successful by exporting sugar to Okinawa, Japan and successfully launched sugar brand, ‘Baeksul’, which became one of the biggest food brands in Korea. In addition, Cheil-Jedang released beef flavored spices (used in making broth) called Dashida. With its’ success, Cheil- Jedang became a prominent food company in Korea.

There was a turning-point for CJ, when its founder Byungchul Lee passed away in 1993. Cheil-Jedang became independent from Samsung Group. Cheil Jedang entered a restaurant industry, and opened a family restaurant named ‘Skylark’. It also started an entertainment business by establishing Dreamworks SKG. Changing the company’s name to CJ, they focused mainly on four businesses: Food & Food service, Bio & Pharma, Entertainment & Media, and Retail & Logistics. CJ group is the 14th largest company in Korea in terms of total asse

CJ Freshway started its food distribution business in 1999 in Korea and has been leading the domestic market ever since. The Korean food distribution industry, currently worth about 27.3 billion USD (33 trillion won) a year, is expected to further grow in the future. (Oh, 2015)

CJ Freshway made a change to deliver the products from producers to customers. In Korea, producers had to go through multiple intermediary distribution channels to sell their products to customers. In this process, shipping cost of the product and profit margin of intermediary distributor were added on the products. Producers can reduce the burden of contacting many distributors and product price decreases as CJ Freshway directly deliver the products of producers to customers (see Figure 1) (Nam, 2013). To achieve this goal, CJ Freshway forms a joint venture with the wholesalers and consumers, called Freshone. In the traditional food distribution process, there were many stages and it caused high price and low quality. However, CJ Freshway integrated the stages and thus shortened the pathway from producer to consumer. Freshone is a center where they cooperate with local small-medium sized distributors in order to shorten the distribution steps and minimize the costs of food distribution (Nam, 2013).

Figure 1: The Change in Distribution Process

The food distribution industry consists of B2B and B2C markets. The B2B market, worth 39 billion USD (47 trillion won), occupies 45% of the total industry, with the remainder occupied by the B2C market (Nam, 2013) as illustrated in Figure 2. 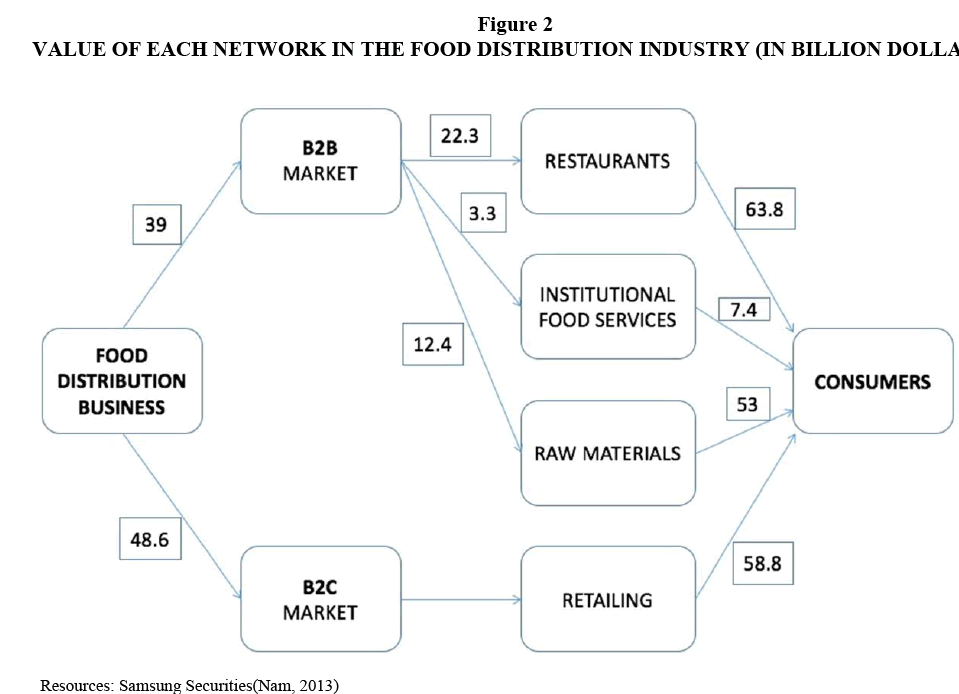 Figure 2: Value of Each Network in The Food Distribution Industry (In Billion Dollars)

In these two markets, there are four main networks. For B2C market, the retailer network focuses on distributing products to large retailing stores like Homeplus, E-mart, and Lotte Mart. For B2B market, there are three types of networks. First, the institutional food service sector provides food ingredients to school and company cafeterias. Second, there is the restaurant network that provides food ingredients to franchises or small-medium sized restaurants. Lastly, the raw material network provides food resources to food manufacturing factories, wholesalers, and retailers (Nam, 2013).

CJ Freshway does not plan to enter the B2C market in the near future as the market is already very saturated with other firms. In the B2B market, CJ Freshway is the largest domestic player. Its main competitors are as following: Hyundai Ourhome, Daesang Bestco, and Shinsegye Food (Oh, 2015).

As Figure 3 shows, large companies such as CJ Freshway and Shinsegae Food only occupy about 6% of B2B market share because local restaurants prefer to procure ingredients from small companies (Oh, 2015), and cash transactions in order to avoid paying tax (Koo, 2015). 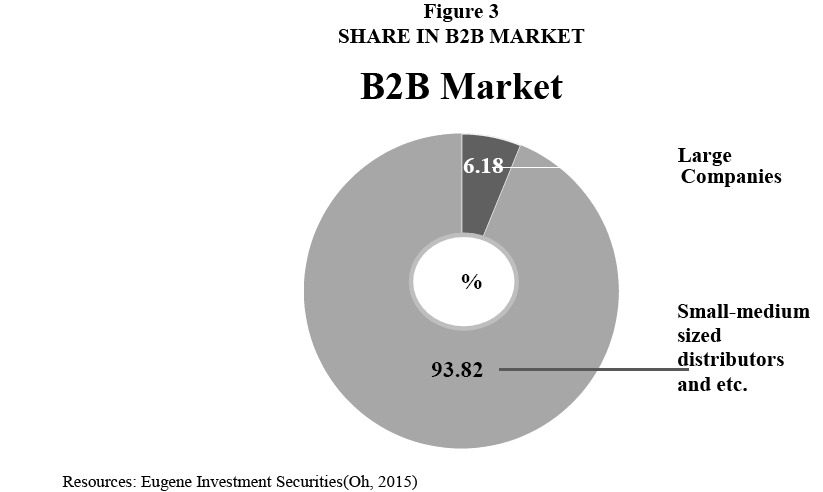 Although CJ Freshway is the market leader, it only has around 2.5% market shares. Figure 4 depicts the market share in the B2B food distribution market among large companies. 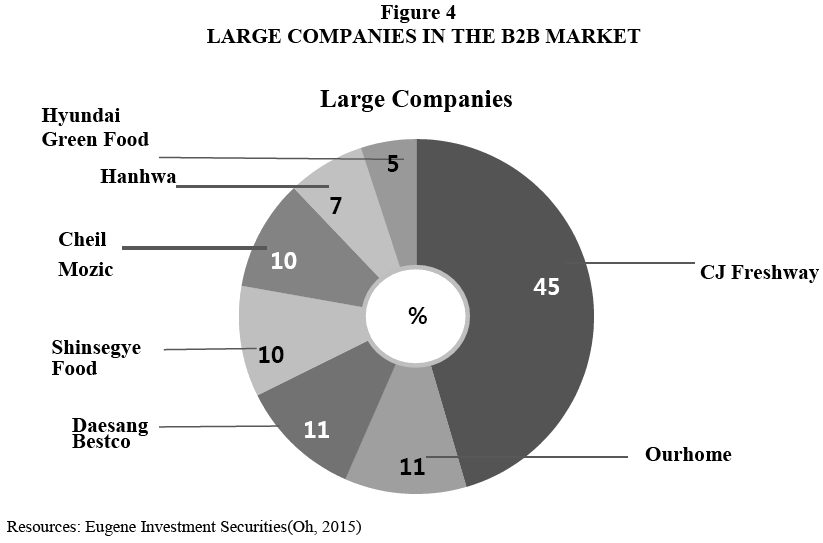 Achieving economies of scale is crucial in the food distribution industry. According to the interview with internal executive, the average profit rate in food distribution market is 2 to 3%. Since the price of food ingredients is open to the public and it is hard to differentiate the products and services, it is difficult to raise profit rate.

In the food distribution industry, there are four main players, which are CJ Freshway, Ourhome and Daesang Bestco. As a way to create competitive advantage and to keep up with the competition within the industry as it gets fiercer, these four players have entered the industry by adopting different business models and approaches. Among three other players within the industry, Daesang Bestco and Ourhome are considered to be the two direct competitors of CJ Freshway.

Daesang Bestco is regarded as one of the strongest players in the food distribution industry. Its business model is solely focused on providing food distribution service. While other competitors, including Ourhome and Hyundai Green Food both provide services such as restaurants business, school food service, and banquets business, Daesang Bestco positioned mainly provides food materials distribution service. As Daesang Bestco is well-specialized in food material distribution service, it has competitive advantage in outbound logistics, where the food materials are shopped and delivered from its large offline warehouse. As such, its strength and uniqueness come from its operating model that provides two main forms of direct service with its warehouse utilization. The first one is Cash & Carry, which is a form of trade that goods are sold from a wholesale warehouse operated on a self-service basis. The second form is Cash & Delivery, which the company actually delivers the ordered products to the customers outbounded from the warehouse store. To increase its size, Daesang Bestco has acquired 20 small-medium sized distributors through M&A. However, it does not seem to have any positive consequence just yet as it has been suffering loss for five consecutive years since 2011.

Ourhome is the strong player especially in the school food service. However, since it is acting as a fast follower in other business service, it is considered as another direct competitor of CJ Freshway. It was formerly part of LG Food Distribution, but it became independent in the year 2000. Ourhome pursues diversification strategy to enter other services such as food materials processing and food materials manufacturing by introducing several private brands and new types of processed food.

First-mover advantage as a market leader 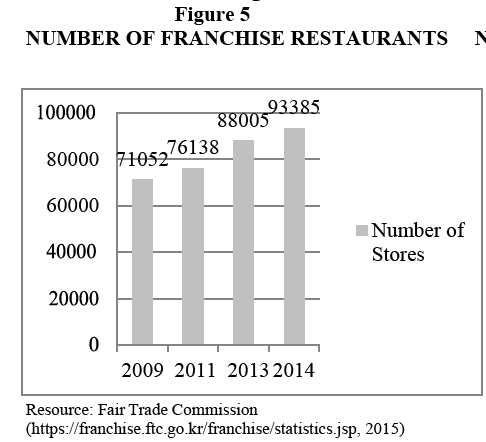 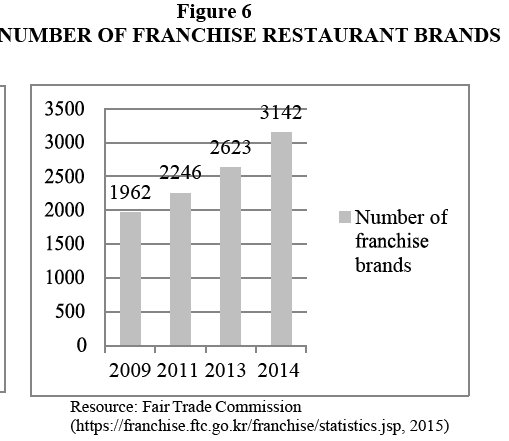 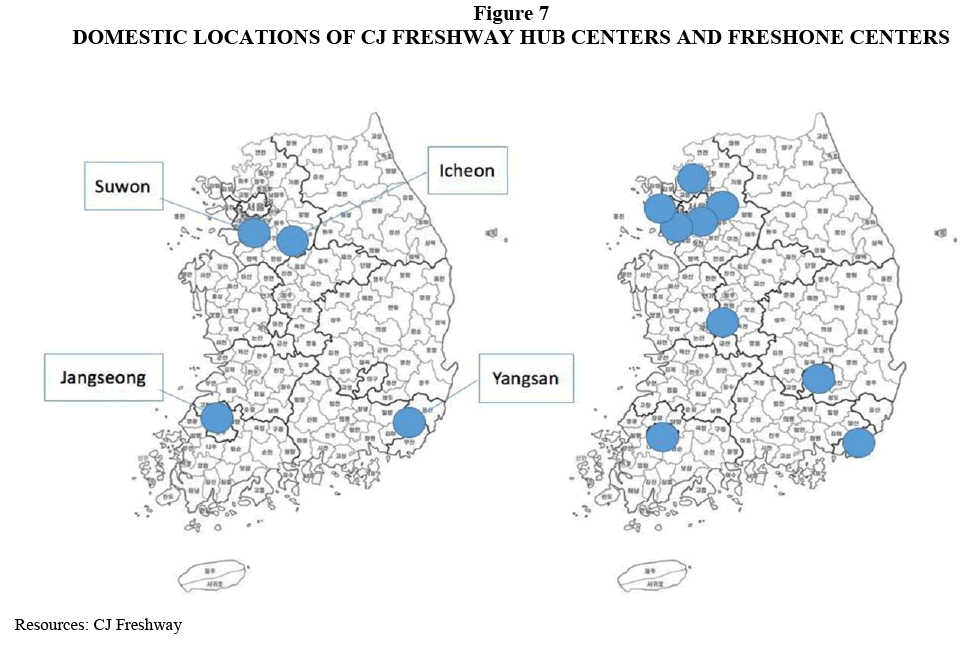 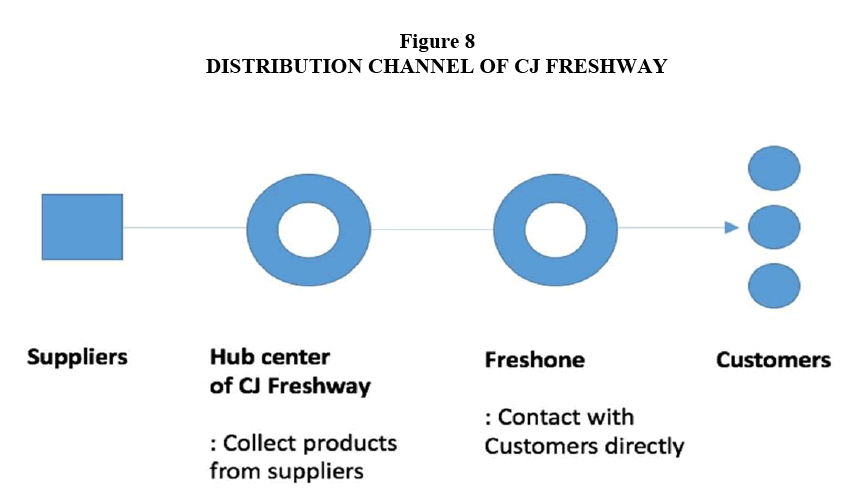 CJ Freshway covers a wide range of the food distribution business and it helps the company to diversify risks and get more chance to grow. The biggest part of revenue comes from distributing food materials for restaurants. CJ Freshway also distributes raw materials to food processing companies, and provides contract meal service. In contrast, its competitors focus only on specific customers or market.

Vertical integration with other CJ firms

In addition, CJ Group helps CJ Freshway to develop PB (Private Brand) products. PB product is manufactured by retailers, and it is distributed exclusively via retailer who manufactured it. PB product is the key source of competitiveness of food distribution company. When developing new PB products, it is very important to understand food culture and needs of customers. In this perspective, CJ Cheil-Jedang is perfect partner for CJ Freshway. CJ Cheil Jedang has a capability in developing food products.

PB is one of the critical sources providing the company with competitive advantage. As food distribution businesses is undergoing a long-term recession in the moment, they have turned to develop PB products as a solution. These products are cheaper as it can reduce the cost in distribution process CJ Freshway can attract more customers and increase profit by utilizing its PB products, such as, It’s Well, and Freshway. PB products are expected to have prospective growth in the near future.(Lee, 2012)

The reputation of CJ in Korea attracts restaurant owners and franchise restaurant brands as customers due to its history and high quality products. Restaurant owners mainly consider two factors when choosing food material suppliers; price and reliability. In addition, franchise brands aim to expand by drawing more franchisees, and thus these brands collaborate with prominent partners like CJ Freshway. In Korea, people tend to open franchise restaurants after retirement, without any experience and knowledge in food and beverage business. Therefore, in the process of deciding on which franchise restaurant to make contract with, the reputation of CJ may give these potential franchisees a sense of reliability.

In the food distribution industry, most competitors, such as Daesang Bestco expanded their businesses through M&A (Mergers and Acquisition) to gain direct control over operations and sales. In contrast, CJ Freshway formed a joint venture with small-medium sized local distributors by obtaining 51% or more of the total shares (See Table 1). This joint venture is called Freshone. The distributors of Freshone receive monthly payments, dividends, and incentives from CJ Freshway. In Freshone, actual sales and delivery of ingredients happen, whereas CJ Freshway provides distribution centers, hygiene system in delivery, and taxation services.

Local distributors can attract more local restaurant owners as customers and hygiene system of CJ Freshway. By working with CJ Freshway, their status and reputation is increased and they gain fixed amount of income securely. In addition, by joining Freshone, they can now get extra incentive from the company based on their ability.

The process of food distribution will be more standardized and shortened when collaborating with CJ Freshway. This makes the local distributors use more advanced equipment and devices provided by CJ Freshway.

Due to the features of food distribution industry, where margin hardly gets high, the only way to thrive in the fierce environment is to realize economies of scale. As a means to gain economies of scale, it can be said that a firm is given three options: joint venture, M&A, and contacting the local distributors on their own. For CJ Freshway, it is distinguished with other firms as they formed a joint venture with small-medium sized distributors. Small-medium sized distributors can gain the standardized process and revenue increase by participating in Freshone. CJ Freshway can utilize the networks of local distributors. However, Freshone centers are currently still struggling to gain the wholesalers and small-medium sized distributors, although the features of Freshone were expected to be very attractive. Although CJ still stands as the leader in the B2B section of the industry, their market share sums up to only about 2-3 percent. As this percentage refers profits, the actual distributors who have not joined Freshone sum up to more than 97% of the whole market.(Oh, 2015) 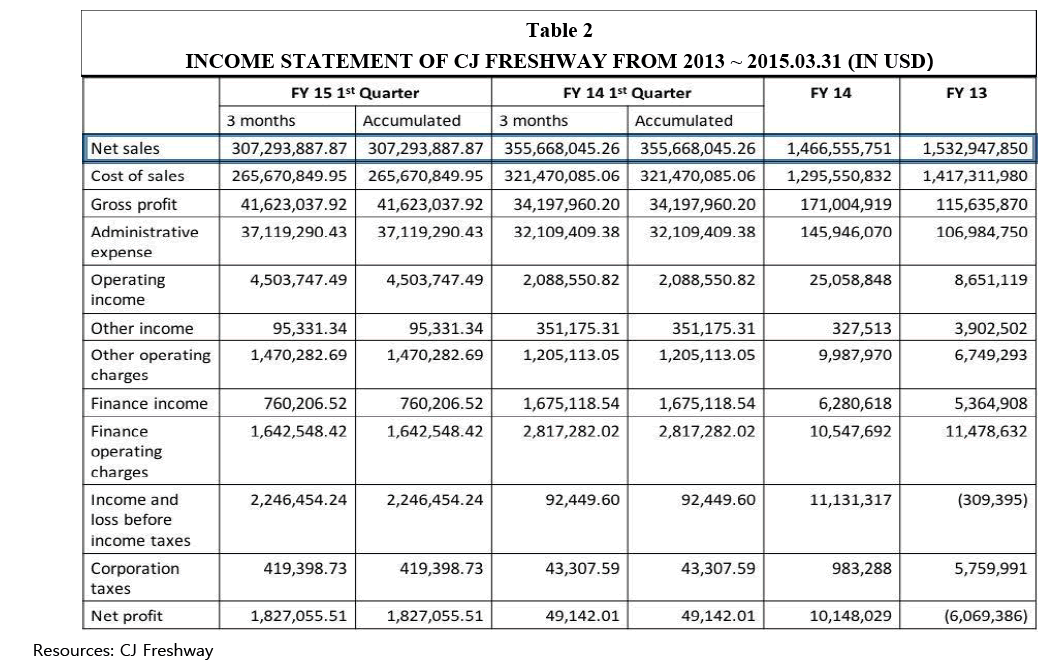 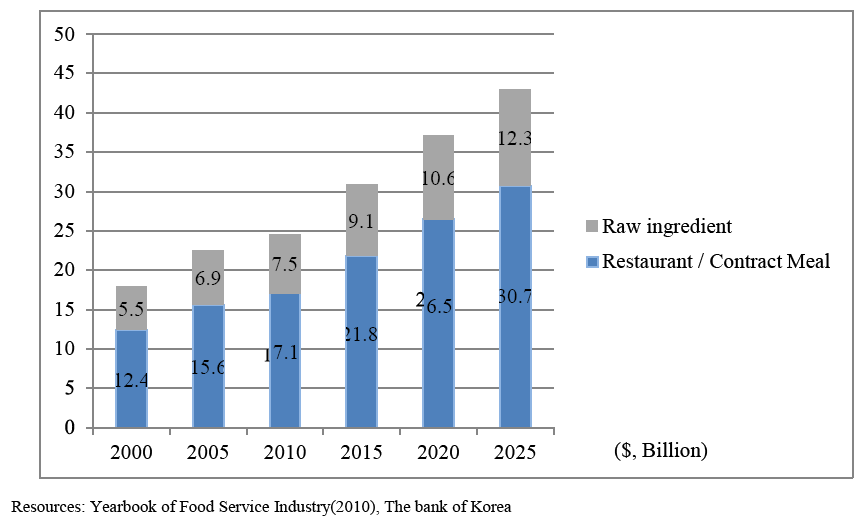 Appendix 2. Sales portion of each business units in cj freshway in 2014 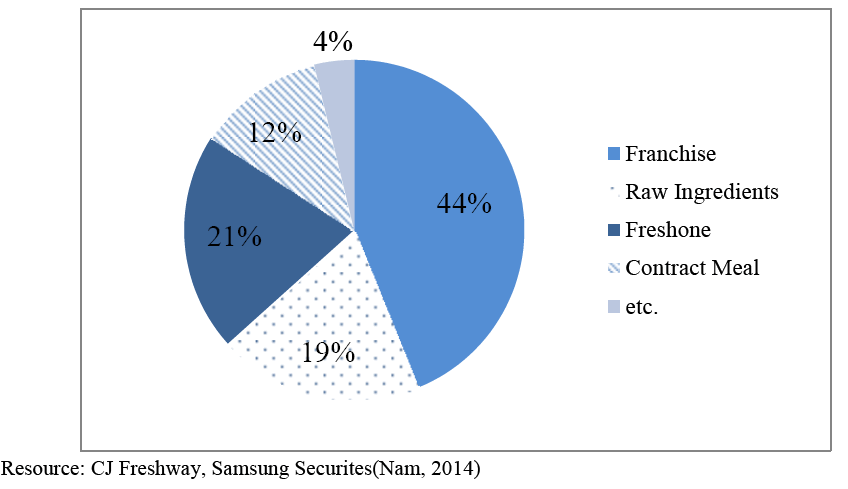 Sysco is a food distribution company that takes up the largest market share with 18% in the US. Many companies in Korea are benchmarking Sysco, since Sysco made success through integrating many small-medium sized distributors with M&A. As there are many small-medium sized distributors in Korean food distribution industry, many companies try to refer to Sysco’s case. Other than their successful M&A, there are also other factors that made them superior than their competitors.

First, by expanding their distribution centers aggressively, Sysco could cut cost by shortening delivery route and attracting new customers. This led to curtailing the total cost of logistics and improvement of quality and stock management. Therefore, this system became one of the main drives of rapid growth. 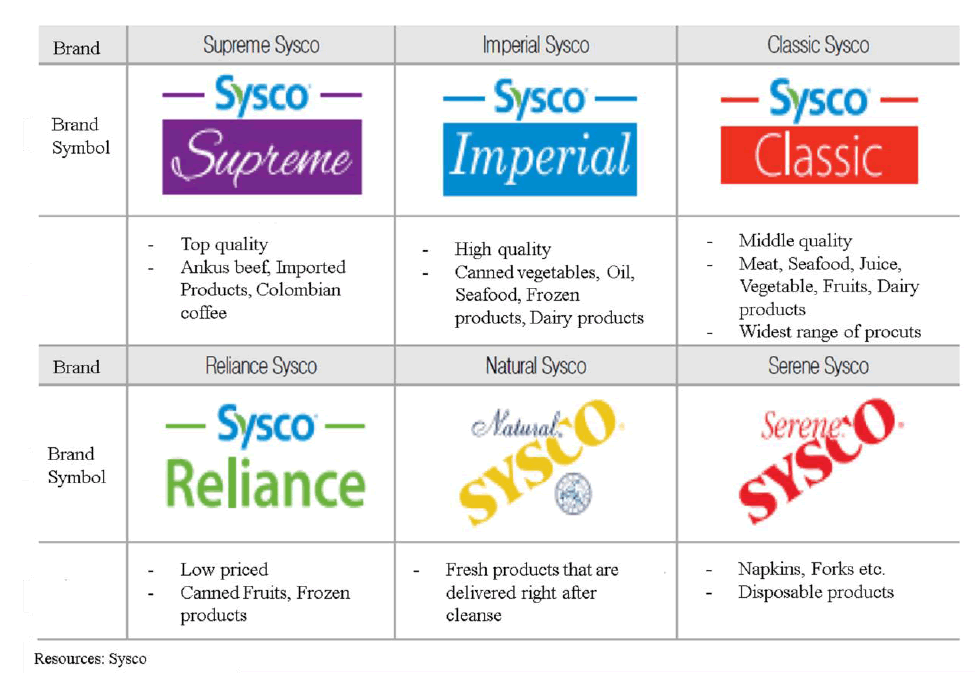 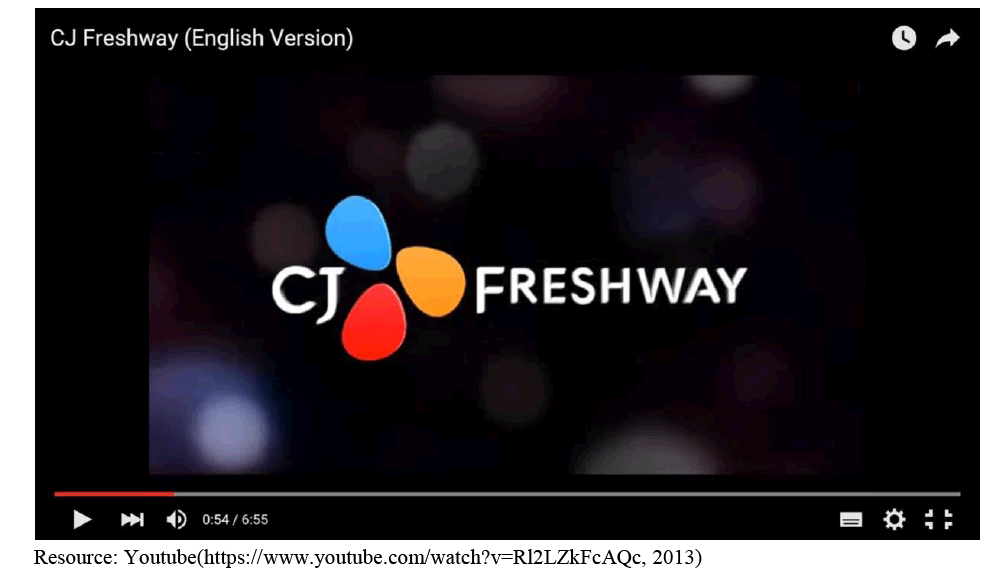