Community well-being has recently become a hot topic in the area of the social sciences, since issues regarding factors such as happiness, quality of life, life satisfaction and well-being are becoming more important at the community level (as opposed to the individual level). Accordingly, a great deal of research on the subject has been conducted by social scientists worldwide. One of the characteristics underlying this research is that objective, concrete policy suggestions have not been put forward; rather, these works have focused primarily on measurement issues and on theoretical discussion about the definition of related terms such as ‘happiness’, ‘well-being’, ‘life satisfaction’ and ‘quality of life’ (Mogilner, 2010; Mogilner et al., 2011; OECD, 2013, 2014; Seligman, 2004; Tanzi and Schuknecht, 1998; UN, 2013). As a result, few works of policy analysis have been produced to date and few policy suggestions on community well-being issue have as yet been put forward. In order for policymakers and policy implementers in the field of community well-being to be able to contribute to policy improvement, decision-making on community well-being needs to be effective and based on evidence.

Effective decision-making and learning in a world of growing dynamic complexity require us to become system thinkers-to expand the boundaries of our mental models and develop tools that will enable us to understand how the structure of complex systems creates their behaviour. Against this background, this paper tries to construct policy scenarios for community well-being in Seoul Metropolitan City in Korea using system dynamics and the sensitivity analysis method, scenarios which it is hoped will be of great benefit to policymakers and practitioners involved in community well-being and which, if applied, might help them to predict what will happen in Seoul City in the area of community well-being and related phenomena in the future.

Since at least the time of Aristotle, philosophers have been interested in well-being, understood in terms of the qualities of a good life or a good society. For Aristotle, living a good life meant achieving one’s potential in the areas of knowledge, health, friendship, wealth and other life domains. Fifteen years ago, some scholars (Diener, 1984; Diner and Seligman, 2003) proposed a new science of well-being focused on explaining positive states of mind and taking seriously people’s expressed subjective assessments of their own emotions and quality of life (Lim, 1996; Lyubomirsky et al., 2005; Western and Tomaszewski, 2016).

Following Kahneman, Diener and Schwartz’s work, social scientists’ and policymakers’ interest in the nature and determinants of well-being has grown. Two conceptual approaches to well-being research now dominate the field. The objective approach defines well-being in terms of quality of life indicators such as material resources and social attributes (education, health, social network). The subjective approach emphasizes subjective well-being, that is, people’s own evaluation of their lives, especially life satisfaction (a cognitive evaluation), happiness (a positive emotional state) and unhappiness (a negative emotional state) (Western and Tomaszewski, 2016).

Apart from these works, there have been numerous works (Andrews and Withey, 1976; Argyle et al., 1989; Ben-Arieh, 2006; Campbell et al., 1976; Choi, 2008; Choi and Moon, 2011; Diener, 1984) addressing well-being, happiness, quality of life and life satisfaction. There are two things to be noted about these previous works on happiness-related issues (Diener and Chan, 2012; Diener and Seligman, 2002; Dunn et al., 2008; Kee et al., 2014; Lee and Kim, 2014; Lim, 1996; Soh, 1998; Yang, 2008). First, despite the plethora of research works exploring these issues, it is still not clear how similar terms such as ‘happiness’ and ‘well-being’ should be differentiated. Secondly, the majority of these works have focused primarily on either theoretical or philosophical discussion of the issues or on measurement. As a result, there have been few works investigating how levels of happiness or well-being might be increased, how to predict results relating to well-being and what policy scenarios might be applied to raise levels of well-being. For these reasons, we attempt here to construct policy scenarios for community well-being, to simulate them and to conduct sensitivity analysis so as to predict future community well-being under conditions of uncertainty.

This research employs system dynamics and sensitivity analysis. System dynamics is a methodology and mathematical modelling technique designed specifically to frame, understand and discuss complex issues and problems. Originally developed in the 1950s to help corporate managers improve their understanding of industrial processes, the technique is currently being used throughout the public and private sector for policy analysis and design. System dynamics is an aspect of systems theory, which is a method for understanding the dynamic behaviour of complex systems. The basis of the method is the recognition that the structure of any system-the many circular, interlocking, sometimes time-delayed relationships between its components-is often just as important in determining its behaviour as the individual components themselves. Examples are chaos theory and social dynamics. Proponents of the method also claim that because there are often properties of the whole which cannot be found among the properties of the individual elements, in some cases the behaviour of the whole cannot be explained in terms of the behaviour of the parts (Sterman, 2000; Wikipedia, 2017).

The variables employed in this analysis are explained in Table 1 and are depicted in the causal diagram shown as Figure 1.

Note: The actual values of the variables are omitted here 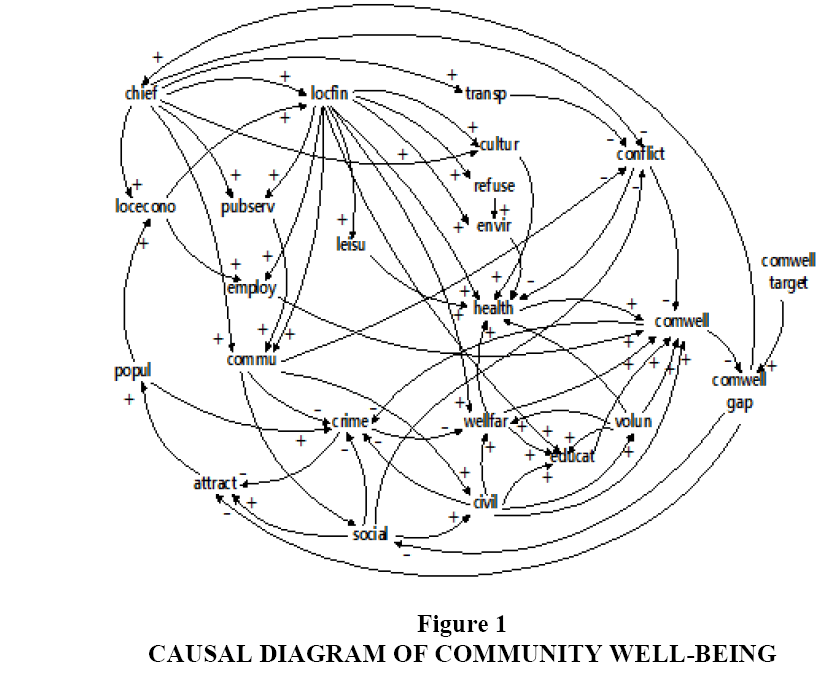 Table 2 shows the descriptive statistics of the main variables used in this analysis of Seoul Metropolitan City. GRDP (GRDP), social welfare expenditure (wellfar), crime rate (crime) and local finance (locfin) are actual existing data, whereas in this analysis level of community well-being (comwell) data for Seoul are measured by questionnaire survey and data for attractiveness (attract) are produced by focus group interview (FGI).

Figure 2 represents a model for simulating the community well-being behaviour of seoul metropolitan city over time. 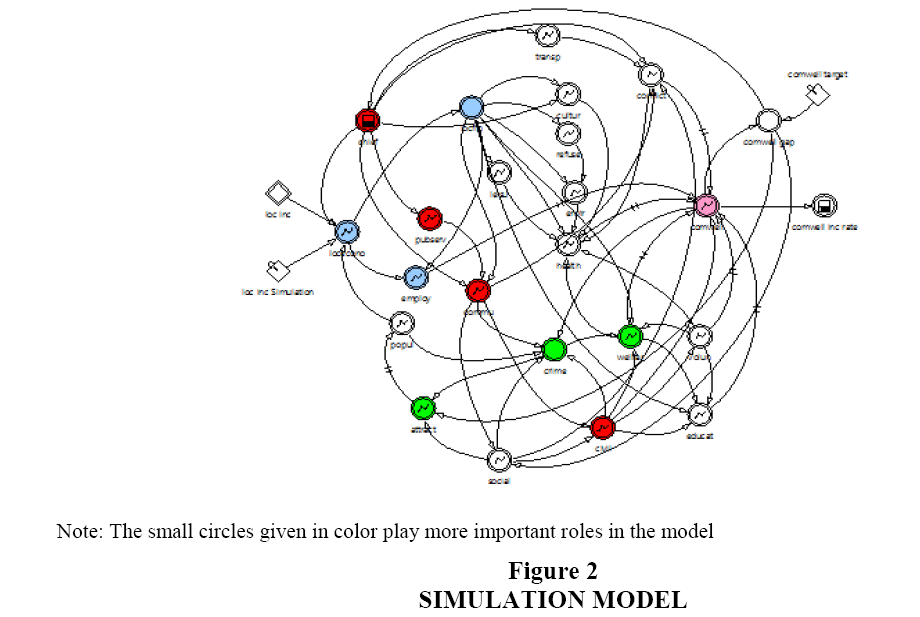 Figure 3 shows the forecast value for the GRDP of Seoul according to the three GRDP scenarios. 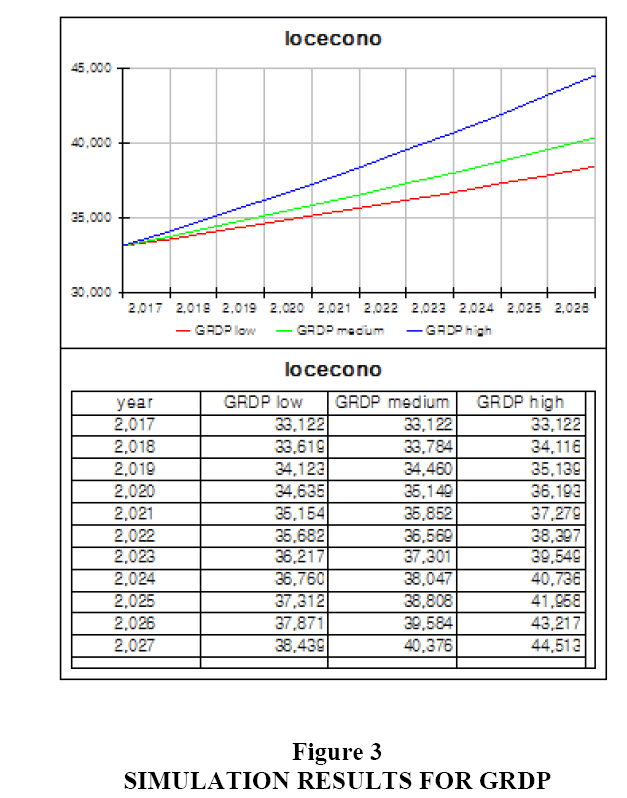 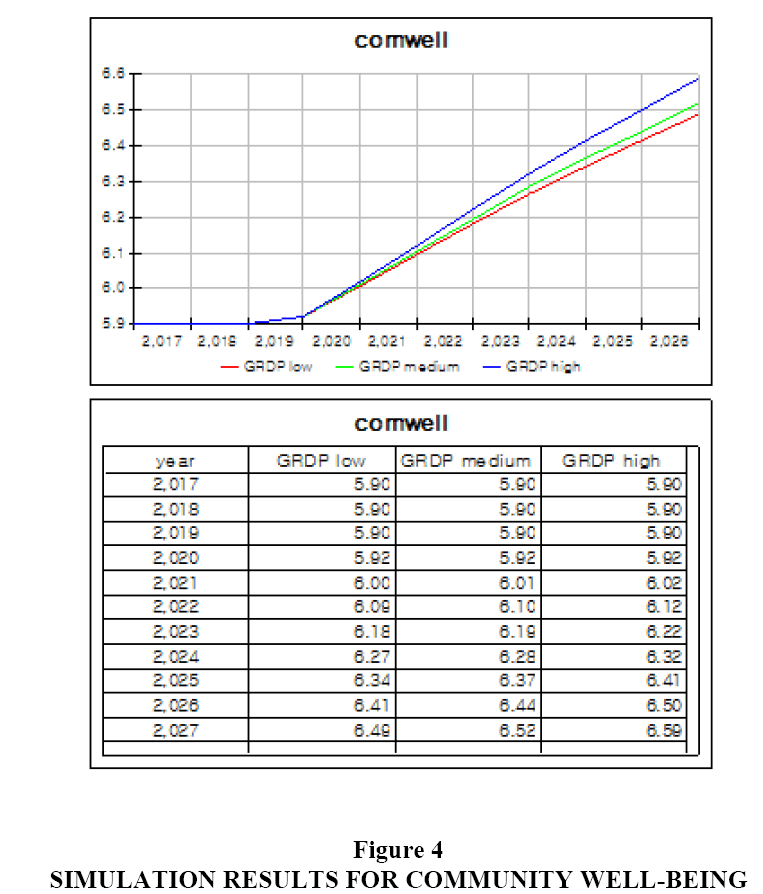 Figures 5-7 present the simulation results for some of the important variables in the model. They also show the predicted values for Seoul’s attractiveness, crime rate and social welfare expenditure; its local government head’s positivity towards community well-being; the integrity of public servants working for its metropolitan government; its employment rate; the level of positive communication between its citizens and public organizations; its civil society; and education, health and voluntary activities in the city. 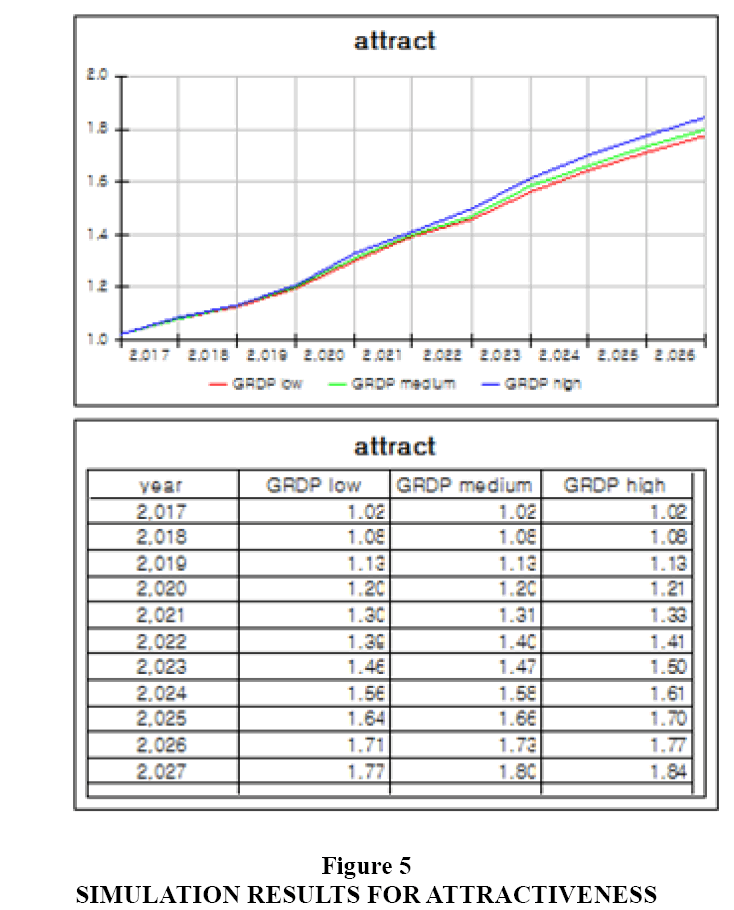 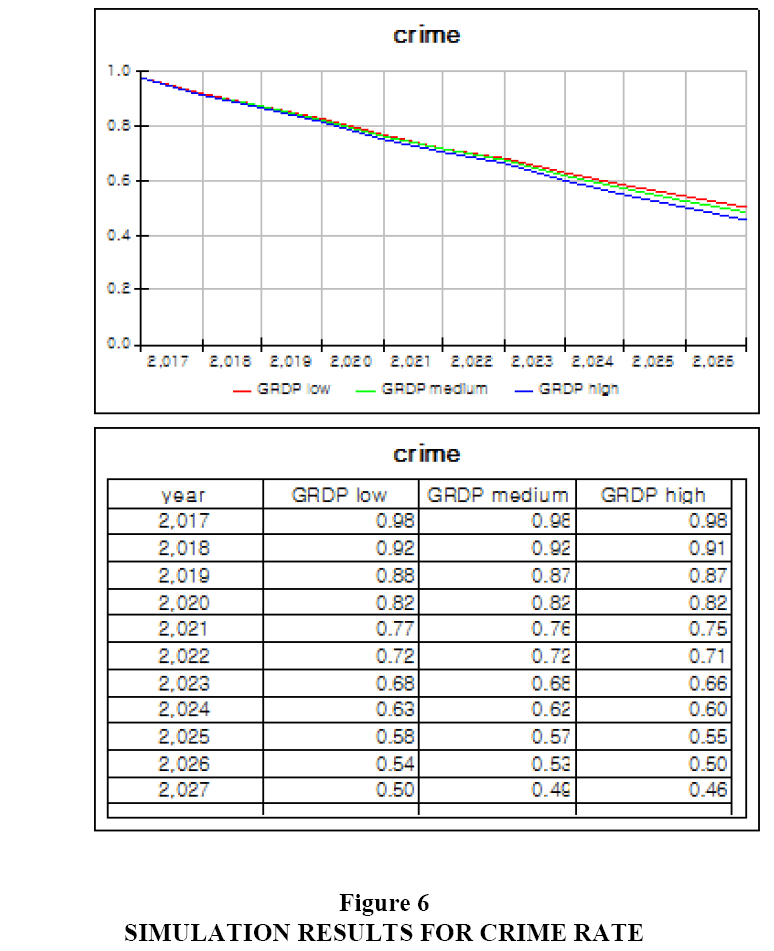 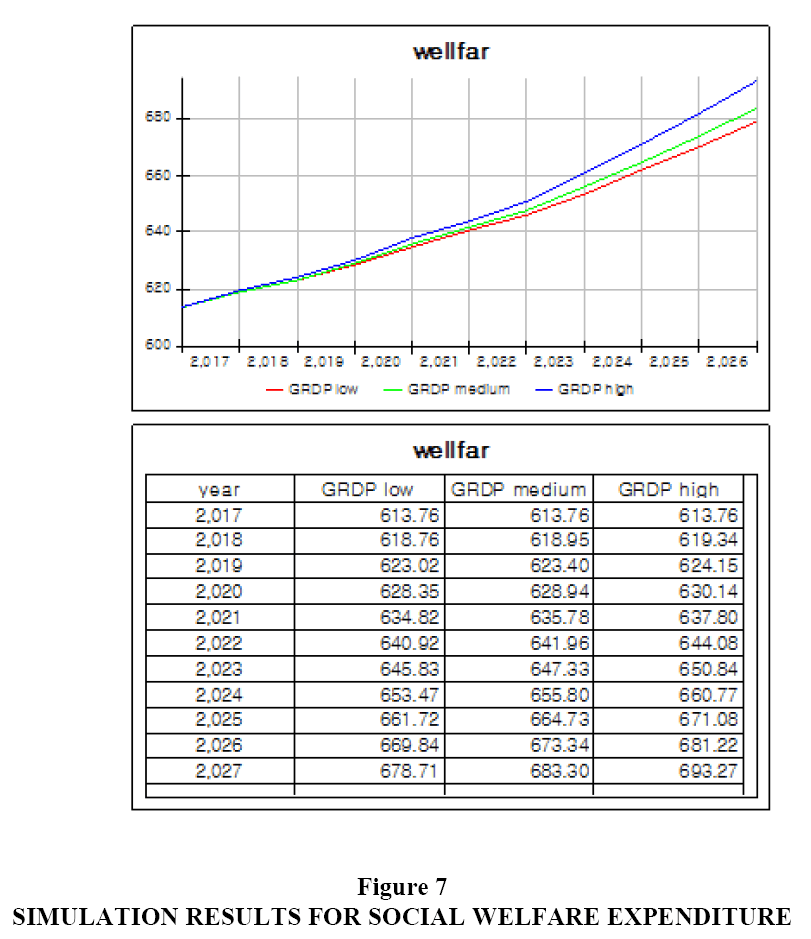 Figure 6 shows the simulation results for the crime rate in Seoul when the three GRDP scenarios are applied.

Figure 7 shows the simulation results for social welfare expenditure over time when the three GRDP scenarios are applied.

Figures 8-10 show the predicted values, when the three scenarios are applied, for: the head of local government’s attitude; the integrity of public servants working in Seoul; employment rate; level of positive communication between citizens and public organizations in Seoul; civic organizations; level of educational environment; voluntary activities; level of healthcare; transparency; refuse collection and disposal; degree of conflict in Seoul; and level of environmental excellence. 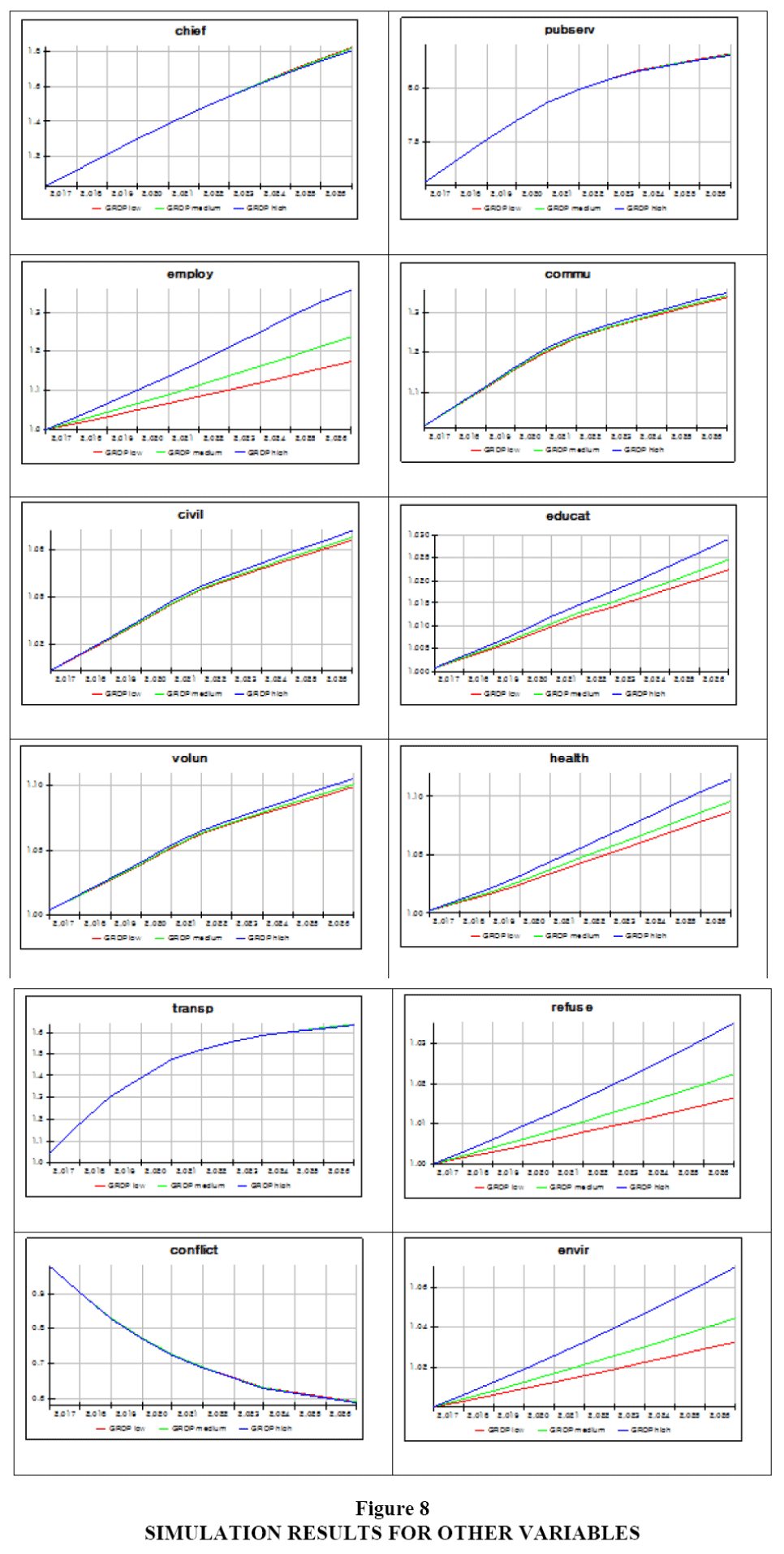 Figure 8: Simulation Results for Other Variables 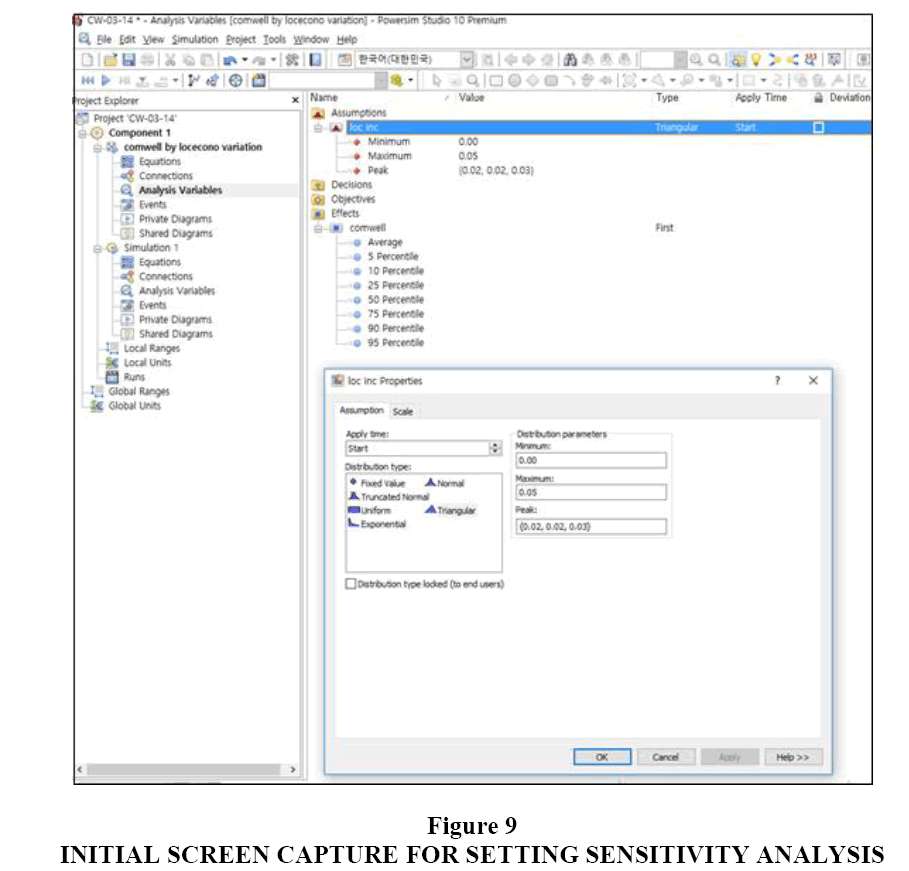 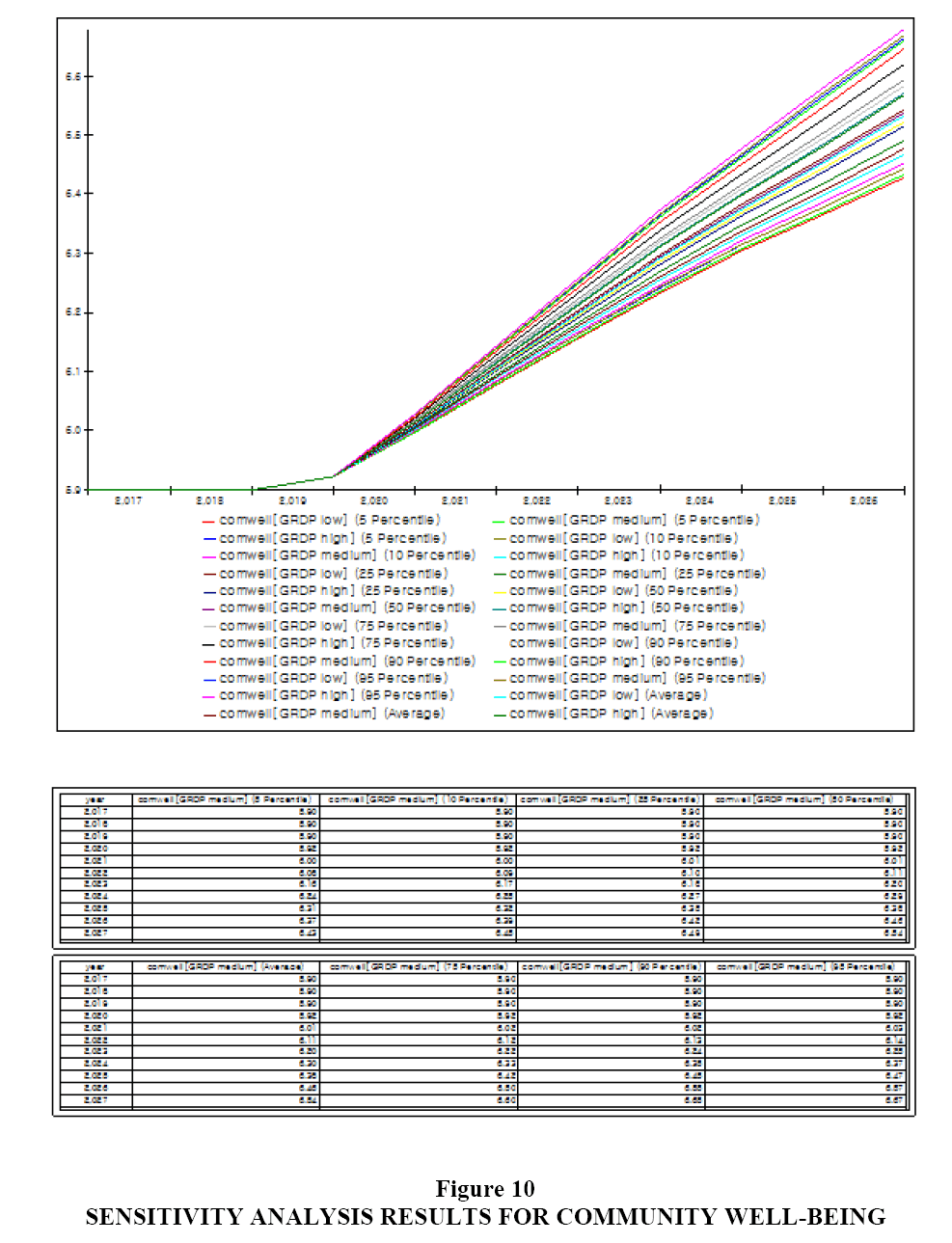 Future trends are uncertain and so it is necessary to conduct sensitivity analysis to predict values, considering uncertainty in the future. Here, we assume that GRDP could affect community well-being the most and we situate the ranges of GRDP growth from 0% to 5% for sensitivity analysis, as shown in Figure 8. The peak value for GRDP growth was 1%, 2% and 3%, as discussed above.

Finally, it should be pointed out that this study represents a preliminary rather than an in-depth investigation. Further research and reflection need to be undertaken and shared regarding the effectiveness of the system dynamics approach, as a means of inspiring further robust, scientific, evidence-based knowledge in the field. Promoting and sharing positive experiences in the field of community well-being study can bring about a shift within a culture based on the potentials and strengths of individuals, rather than focusing solely on their weaknesses and problems. It is hoped that more precise methodologies, along with further policy-related research, will enable us to reshape how we think about community well-being and how we can live our lives in a well-being society.

Ben-Arieh, A. (2006). Measuring and monitoring the well-being of young children around the world. The Quality of American Life.

Tanzi, V. & Schuknecht, L. (1998). Can small governments secure economic and social well-being? In H. Grubel (ed.). How to spend the fiscal dividend: What is the optimal size of government?