Determinants of Entrepreneurial Intention Among Millennial Generation in Emerging Countries

Entrepreneurship still had its attraction for researchers due to the recognition of entrepreneurship’s contribution towards the nation's economic growth and competitiveness (McClelland, 1961; Porter, 1990; Ari Saptono, 2018). Thus, this attention leads to the awareness of the importance to increase the number of entrepreneurs.

Among those countries, Indonesia showed the biggest one (4.7% to be exact); compare to Malaysia (-0.2%) and Philippine (-1.4%). As the 5th largest countries in the world, this negative growth became a concern of all parties within the country, particularly government, considering the effect to the unemployment rate. Many efforts had been made; include designing entrepreneurship programs for university students, courses for the owners of small and medium enterprises, and deregulation to facilitate funding for small and medium enterprises.

Being an entrepreneur was a career preference. Hence it was essential to build preference for young generation toward entrepreneur profession. The millennial generation, overtaken of Y generation, was the term to describe people born in the early of 1980s to 2000s. They had unique characteristics compare to the previous generation, make them valuable to be explored. Since career preference was formed on the university, it was reasonable to put undergraduate students to be the research subjects.

Later, they modified their previous model by combining perceived barriers and perceived support into the perception of environmental factors. This modification seemed rational since both the dimensions of perceived barriers had potential to be supportive and unsupportive as well. In this new model, Franke & Lüthje (2004) emphasized on the role of university support to accompany other dimensions: market, financing, government policy, and society.

All of the studies of contextual factors relied on perception level instead of the actual environment. The argument about the perceptions of the individual was important for determining the opportunities and resources in the environment.

The study conducted by Gorman, Hanlon, & King (1997) proved that entrepreneurial intention could be positively influenced by educational programs. Another study, Kolvereid & Moen (1997) also pointed out a connection between education in entrepreneurship and entrepreneurial behaviours.

Henderson & Robertson (2000) pointed out universities can offer an awareness into entrepreneurship that could inspire the choice of entrepreneur career. Moreover, adequate training and education on running a business can also direct people towards such a career. Thus, it was obvious that effective entrepreneurship education can motivate people to choose an entrepreneurial career.

Universities played a critical role to inspire the young generation to choose an entrepreneurial career. However, they were sometimes suspected of being too academic and nurturing entrepreneurship insufficiently (Gibb, 1993, 1996). Wang & Wong (2004) pointed out the fact that the failure of universities to provide sufficient business knowledge and adequate preparation to start a new venture will likely discourage students from choosing an entrepreneurial career.

Franke & Lüthje (2004) suggested that creative atmosphere, development programs, and active support provided by the university had a significant impact on students entrepreneurial intention. Regarded to cultural influence, the study of Lee et al. (2005) revealed that the design of entrepreneurship education should take into consideration their unique cultural contexts to foster entrepreneurship.

We sum the perceived level of education was the perception of students about the quality of entrepreneurship programs provided by the university to prepare the students to be an entrepreneur. When students think universities provide adequate preparation for them to start a new venture, then it will increase the likelihood of entrepreneurial intention. Thus, our first hypothesis is:

Perceived structural support defined as perceived entrepreneurial assistance from the country’s economy, public and private and non-governmental agencies (Ambad & Damit, 2016). Perceived structural support was a modification of perceived opportunities by Turker et al. (2005). This construct captured the favourability of the economic environment and government support to a new venture. Saeed et al. (2015) used different terminology, perceived institutional support which had a similar meaning. When the environment was favourable, it will increase the propensity to be an entrepreneur, vice versa. Turker et al. (2009) pointed out that the behaviour of the actors in the public, private, and non-government sectors will affect the perception of whether the business environment generates opportunities or threats.

Government regulation about the difficulty in acquiring the loan to start a business were the barriers perceived by students then discourage them from being an entrepreneur (Lüthje & Franke, 2003). Franke & Lüthje (2004) suggested that government policy and financing affect students’ likelihood to become an entrepreneur. Studies had proved the relationship between structural support and entrepreneurial intention (Ambad & Damit, 2016; Saeed et al., 2015). Thus, it was hypothesized that:

Birley & Stockley (1999) stated, at the beginning phase of running a business; entrepreneurs depend profoundly on the informal network of friends and family members to obtain relevant data. As the business had settled, entrepreneurs extend their networks to include formal networks such as bankers, accountants, lawyers, suppliers, government agencies, customers, and consultants. Besides of informational aspect, free network support related to their approval regards to entrepreneurial career choice. The study of Henderson & Robertson (2000) showed that family was the second leading factor affecting career choice of respondents after their personal experience. The study of Begley et al. (1997) indicated that the social status of entrepreneurs might be predicted as a factor to start a business.

Based on our research hypotheses, we develop a research model as follows (Figure 1): 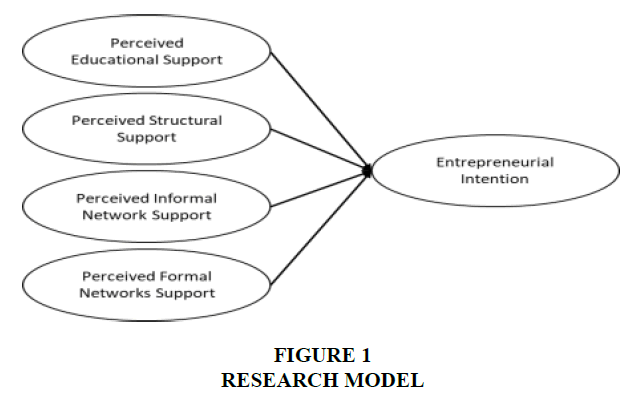 In this study, 300 final year students were selected as the sample from five universities in Jakarta, the capital city of Indonesia. Regarded to their reputation, these universities had the fascination to attract students from all over the region within the country, thus represent the diversity of their ethnics and culture. The self-administered questionnaire was distributed to the respondents. The collected data were analysed through AMOS 19. 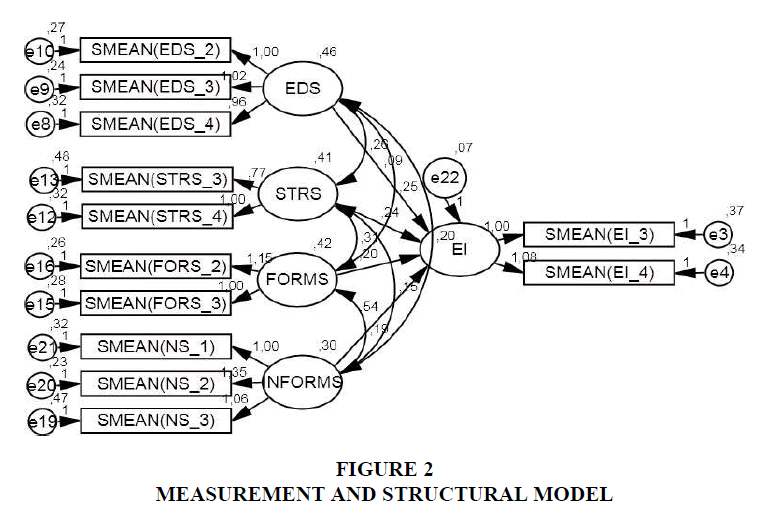 The response rate was high, 273 respondents returned the questionnaire with complete answers. In this study, confirmatory factor analysis was performed to determine the underlying factorial structure of the scale. The result of Bartlett’s analysis revealed on Table 1, indicated that process of factor analysis could be continued since KMO value of each variable was more significant than 0,50 and p-value of Bartlett’s test for each variable was less than 0,05.

The result of the goodness of fit model testing on this research model was shown in Table 1. Since all of the results achieve the criterion, so we can conclude that the model was fit.

Among four hypotheses which had been tested, H1, H2, and H3 were rejected (Table 2). However, we found that free network support had a significant impact on entrepreneurial intentions.

There was no significant effect of perceived formal network support on entrepreneurial intention in this study. It had not similar results as Parvaneh Gelard (2011), Turker & Sonmez Selcuk (2009), (Denanyoh et al., 2015). The significant association between the perceived informal network and entrepreneurial intention confirmed many previous studies, except for Parvaneh Gelard (2011).

The result of this study did not confirm the significant role of universities in fostering intention of becoming an entrepreneur among university students. This result was surprising since all universities effort is to courage students’ intention. Argument of this finding of entrepreneurial education had a long-term, instead of the short-term effect. Students wanted to try to experience working in a big company first before deciding to create a venture. Another argument about perceived educational support and perceived structural support affect entrepreneurial intentions indirectly, for example through self-efficacy (Saeed et al., 2015).

Based on this argument, we were still thinking about entrepreneurial education even important. The compelling program design in line with contextual learning process was essential to develop students’ knowledge and skill. It was also important to inspire students to choose their entrepreneurial career. Regarded to the diversity, entrepreneurship educational program surely should consider context and culture.

Structural support also found to be an insignificant predictor of entrepreneurial intention. We argued that this result came from a consideration that in Indonesia several start-up ventures successfully enter the market recently. The owner of these enterprises represents optimism of achieving success even when the structural factors are unsupported. Furthermore, we suspected that although the recent condition perceived as uncorroborated, students think that near future situation will get better since entrepreneurship had become one on primary goal in the government program. The role of optimism had been brought by (Ozaralli & Rivenburgh, 2016).

Despite the result, for the practical purpose, we were still recommending an active role of government, private sectors, and universities to jointly build a robust supportive infrastructure and socialize it effectively with students. While government induces entrepreneurship through policy, regulation, and practical programs, and private sectors develop some pro-entrepreneurship agenda, neither of this action nor the information targeting university students as the target audience. Therefore, a collaboration between government, private sectors, and universities were needed, so students were well informed and experiencing the direct benefit of this policy, regulation, and action.

The third result did not confirm the effect of perceived formal network support to entrepreneurial intention. We suspected the cause of this finding also related to the optimism of students for the better near future. For accommodating this expectation, the government's role as the extension of the university was necessary. It means that students need to feel secure after they graduate and start a new business without the university's help. The networks will function as strategic alliances for purposes, including managing the business, accessing resources, ideas generating, and promote social support

In the final result, we find that entrepreneurial intention related to perceived formal network support. This result was not surprising since one of Indonesian’s strong characteristics was a collectivist culture. Thus, it was crucial to awake parents’ consciousness to support their children to choose an entrepreneurial career. Parents should be informed, and educated that entrepreneur profession as prestigious as any other profession, instead of being a government employee. The effort will be challenging since the old generation has a way of thinking to put entrepreneur as a second-class profession, the last alternatives when there were no job opportunities available, mainly as a government employee. Hence, it is a must thing to do.

The study contributed an insight of how the millennial generation reacts to their environment and the relation of it to their intention to become an entrepreneur. First, the optimism tend to neglect the current situation and their behaviour somewhat affected by their near future expectation. Second, in emerging countries where the bureaucracy was complicated and the regulation sometimes unsupported for entrepreneurship development, government reliability played an important role to fulfil the expectation.