Although South Africa is considered one of Africa’s largest economies, it continues to experience high levels of unemployment, at 26.7% as of the fourth quarter of 2017, and levels as much as twice as high among the youth at 52.20% (Stats SA, 2017; Trading Economics, 2018). Despite fluctuations, the situation has worsened following the 2008 global financial crisis ((Figure 1) (Source: World Bank, 2017)). At the same time, poverty and inequality continue to plague the country, with the most recent Gini coefficient at 0.69, the highest inequality in the world (World Bank, 2017). The challenges of unemployment, poverty, and inequality in South Africa are coupled with low economic growth. South Africa faced a recession with its economic growth shrinking by 0.7% in the second quarter of 2018 (Stats SA, 2018). These challenges require urgent attention if the South African economy is to get back on track towards recovery. 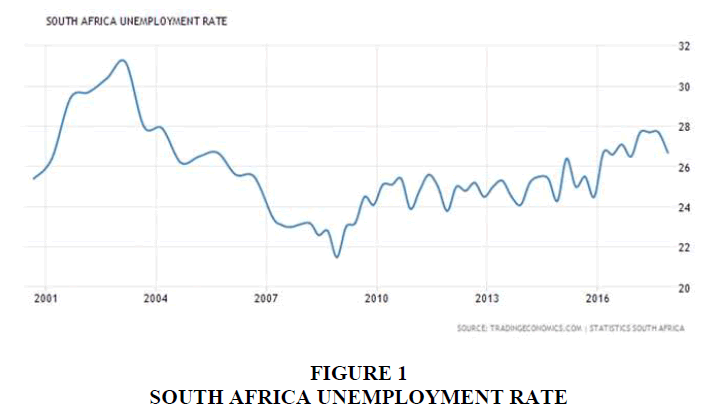 Despite attempts to address these challenges, the three issues of unemployment, poverty, and inequality witnessed in the past years remain a concern (do Vale & Cameron, 2017). Several authors (Alvarez & Barney, 2014; DeJaeghere & Baxter, 2014, Herrington et al., 2009; Herman & Stefanescu, 2017; Simrie et al., 2011) argue that poor economic growth, inadequate job creation, and poverty can be addressed through increasing entrepreneurial activity. Similarly, Rogerson (2008), as well as Herman and Stefanescu (2017), believe that such activity can help to overcome economic hardship, unemployment, and poverty. In South Africa, Venter, Urban, and Rwigema (2011) have suggested that the high levels of unemployment and poverty call for the need to increase entrepreneurial activity in the country.

In response, our study investigated the relationship between entrepreneurial activity, economic growth and unemployment in South Africa. We sought to address the following questions:

1. Is there a link between entrepreneurial activity, employment and economic growth in South Africa?

2. How do South Africa’s entrepreneurial activity and economic growth compare to those of the BRICS countries, Southern Africa Development Community (SADC), the Efficiency-Driven Economies and other Low-Income Economies?

Additional data for comparative purposes came from GEM Surveys and the SADC statistics yearbook 2014. Owing to variations in available comparative TEA statistics, different groupings were used as the basis for the comparisons executed in the study. From the GEM surveys came groupings from BRICS countries (2001-2002); SADC (2003, 2004, 2012-2016); Low-Income Economies (2005-2007); and Efficiency-Driven Economies (2008-2011) (Table 1); from the SADC statistics yearbook 2014, we sourced data on average GDP per capita and average unemployment rates.

A quantitative analysis using descriptive statistics and trend analysis, of the data, were undertaken to obtain the results from which interpretation and discussions are drawn. All in all, fifteen (n=15) observations were made and are presented in the section that follows.

This section begins (Table 2) with the entrepreneurial activity rates, unemployment rates and GDP growth per capita for the period 2000/01 to 2016/17. This is followed by descriptive statistics and a trend analysis. Table 2 indicates that the level of entrepreneurial activity in South Africa, measured by the total TEA for the period 2001-2002, was lower than the averages for the BRICS economies. Similarly, for the years 2003, 2004 and 2012-2016/17 it remained significantly low compared to the averages of SADC countries that participated in the GEM surveys during these years. The average levels reported for a similar group of countries (known as Efficiency-Driven Economies) that participated in the GEM surveys remain consistently higher than that of South Africa’s TEA rates for the periods 2008-2011. With slight variations on a year on year basis, South Africa’s TEA rate remained significantly below average compared to similar countries that participated in the global GEM surveys since 2001. For the period 2014– 2015, a slight increase from 7.0% to 9.2% was experienced, but the improvement remains 1.6 times below the average of the Efficiency-Driven Economies (15%) during the same period. A TEA rate of 7.3% was recorded for the year 2012-2013, almost 50% below the average (14.3%) of the Efficiency-Driven Economies. During the period 2013-2014, South Africa’s TEA rate was 7%, only half the average of the Efficiency-Driven Economies (14%). Given the realisation that there is a growing pool of graduates who continue to suffer the anguish and frustration of unemployment, as well as continuing low economic growth in South Africa, the consistently below-average levels of entrepreneurial activity are a concern, and worth serious attention.

Since South Africa did not participate in the GEM Survey in 2007, there was no measure of its TEA rates for that year. Therefore, the TEA rate for 2007 was extrapolated as the average for the year 2006 and 2008 ((Table 2) (Sources: GEM Surveys, Stats SA)).

Meanwhile, the descriptive statistics in Table 3 show that the country’s average TEA during the period 2001-2016 was 7.24 with a standard deviation of 1.87. The low standard deviation shows that South Africa’s TEA rate remains consistently low over the period under investigation and this is a cause for concern. At the same time, the level of unemployment remained consistently higher than in other emerging economies within the cluster of Efficiency- Driven Economies and particularly those of the BRICS countries. Specifically, South Africa’s unemployment rate averaged 24.6, while the standard deviation was 1.38 indicating a consistently high level of unemployment during the period under investigation. The country’s GDP also remained low with the lowest recorded negative growth of 1.5% in 2009. The average economic growth rate as measured by GDP growth for the period was 2.9% with a standard deviation of 1.91. These results show that the low levels of entrepreneurial activity as measured by the TEA rate were accompanied by consistently low economic growth and high unemployment. These findings show unfavourable economic conditions for South Africa and if the country continues to have consistently low entrepreneurial activity, the country risks economic stagnation.

For the period under review (2001-2016) it was observed that the TEA rate and GDP growth rate followed the same trends; for instance, every increase in the TEA rate was accompanied by a corresponding increase in GDP. Specific points of interest emerge. For example, from 2001 to 2003 South Africa experienced a decrease in the TEA rate and a commensurate increase in unemployment (Table 3), which could suggest the converse, namely, that entrepreneurial activity is connected with reducing unemployment. Of further interest is the observed significant decline in GDP per capita growth during the period from 2007 to 2009 and an equivalent decline in TEA rates during the period from 2008 to 2009. This reinforces the notion of feedback effects (Galindo & Méndez, 2014). This means that the observed negative economic growth may have contributed to the decline in entrepreneurial activity. The period from 2007 to 2009 was characterised by the global financial crisis, which led to liquidity constraints and a credit crunch, which in turn affected credit markets, thus making it difficult for businesses to access capital. This observation may also explain the low level of business start-ups due to lack of capital, as well as lack of tenacity among prospective entrepreneurs who lack the advantage that entrepreneurial skills training can provide at the higher education level (Figure 2) (Radipere, 2012).

Our findings support the view of positive relationships between entrepreneurial activity, economic growth, and employment. They strongly suggest that the challenges of unemployment, poverty, and inequality can be alleviated through inculcating entrepreneurship throughout society and providing an entrepreneurship-enabling environment. Entrepreneurship is a key contributor to economic growth through innovation, research and development effectiveness, job creation, increased competitiveness, productivity and the formation of new businesses and industries (Kuratko, 2017). As a result, there is no doubt that South Africa needs, not only more entrepreneurs but also a high quality of entrepreneurial activity if the objectives of eradicating poverty and unemployment are to be achieved.

The relationships between entrepreneurship, innovation and ultimately economic growth are untainted (Acs et al., 2017; Audretsch & Belitski, 2017). Hence, Galindo & Méndez (2014) characterise them in terms of ‘feedback effects’ where economic activity promotes entrepreneurship and innovation activities, whilst the latter enhances economic activity. They also emphasise the innovation process as “growth and profit enhancing (2014). While extensive research (Acs et al., 2017; Audretsch & Belitski 2017; Piperopoulos & Dimov, 2015) has confirmed the relationship between entrepreneurship and economic growth, our study is the first to provide empirical evidence to confirm this relationship in South Africa. Ferreira et al. (2017) investigated the relationship between entrepreneurial activity, economic growth and global competitiveness using panel data of forty-three (43) countries from three different types of economies, namely factor-driven economy, efficiency-driven economy, innovation-driven economy. Their findings confirmed that entrepreneurial activity has a positive and significant effect on global competitiveness. Our study further confirms this positive relationship for South Africa which is classified as an efficiency-driven economy.

Over and above encouraging entrepreneurial education and support for emerging entrepreneurs, we call on the government and policy makers to include entrepreneurship enabling policies and entrepreneurship support mechanisms if the much needed job creation and economic growth is to be achieved. Such actions should include reforms on the labour legislation, new policies to transform the education system to encourage entrepreneurship both at basic education levels and in higher education institutions as well as curbing on bureaucracy and corruption which according to Serfontein & De Waal (2015) is crippling many potential entrepreneurs in South Africa.

When compared to other African countries, particularly in the SADC region, South Africa has substantial potential for entrepreneurship development, however, the scourge of corruption, burdensome legislation coupled with an education system that least prepares the graduate for the challenges of entrepreneurship has eroded the country’s potential.

DeJaeghere, J., & Baxter, A. (2014). Entrepreneurship education for youth in sub-Saharan Africa: A capabilities approach as an alternative framework to neoliberalism’s individualizing risks. Progress in development studies, 14(1), 61-76.

do Vale, H.F., & Cameron, R. (2017). The mosaic of local governments in post-apartheid South Africa: municipal asymmetries and spatial inequality. In Inequality and Governance in the Metropolis (165-182). Palgrave Macmillan UK.

Malecki, E.J. (2018). Technological innovation and paths to regional economic growth. In Growth Policy in the Age of High Technology (97-126). Routledge.