The study of female entrepreneurs remains important as in literature we still read about the obstacles and barriers experienced by women in the process of establishing their own businesses (Verheul et al., 2012). This study is based in the United Arab Emirates where research also points out the challenges experienced by female entrepreneurs such as lack of role models, poor access to capital (Kargwell, 2012) and, social and cultural factors (Haan, 2004; Baud & Mahgoub, 2001).

Subjective norms are the views that are considered important by individuals who advise the entrepreneur to perform or not perform certain behaviours influencing the motivation and willingness to perform of the entrepreneur. Bagheri & Pihie (2014) write how females receive less support from their support network to establish their own businesses and there is an urgent need to develop the culture in the family and among the people in the country which values and supports women entrepreneurship.

Attitudes towards entrepreneurial behaviour are a function of one’s beliefs that performing the behaviours will lead to various outcomes and the evaluations of the outcomes. Therefore, if behavioural beliefs suggest that positive outcomes might be obtained by engaging in a specific behaviour, individuals would likely have a positive attitude towards that specific behaviour (Cavazos-Arroyo et al., 2017).

The social identity theory states that individuals have a propensity to identify with groups in their social environment (Hogg & Abrams, 1988) When this happens, a particular social identity is formed which influences personal decision-making processes (Hogg & Hains, 1998), such as vocational choices (Abrams et al., 1998). Subjective norms are "the perceived social pressure to perform or not to perform the behaviour" of entrepreneurship (Ajzen, 1991). Entrepreneurs are motivated to engage in identity related behaviours (Terry et al., 1999). Research has shown how culture may influence entrepreneurship both through social legitimation and through promoting certain positive attitudes related to entrepreneurship (Davidsson, 1995).

In literature there exists a long-neglected importance of identification with, and social cohesion within, peer groups for the transition to entrepreneurship (Obschonka et al., 2012). Vondracek et al. (1986) claimed that one cannot fully understand vocational development and choices without considering the social contexts that effect these processes and judgements. Research on entrepreneurship in general (Lee et al., 2005; Özcan & Reichstein, 2009), strongly suggests that entrepreneurial career choices should be studied by taking into account the social context.

The self-efficacy theory explains how Self-efficacy beliefs are an important aspect of human motivation and behaviour as well as influence the actions that can affect one's life. Regarding self-efficacy, explains that it "refers to beliefs in one's capabilities to organize and execute the courses of action required to manage prospective situations". Numerous investigations have found Entrepreneurial Self-Efficacy (ESE) to be a key determinant of entrepreneurial activity (Boyd & Vozikis, 1994; Fitzsimmons & Douglas, 2011; Krueger, 1993; Krueger et al., 2000; Zhao et al., 2005).

The Theory of Reasoned Action (TRA) (Fishbein & Ajzen, 1975), which is a precursor to the theory of planned behaviour, posited how intentions increase the likelihood of behaviour which in this study is entrepreneurial activity. Intention is itself a function of the favourable or unfavourable evaluation of the action and subjective norms. The theory of reasoned action was considered to be too restrictive and for this reason Ajzen (1985) tried to solve this problem by including another variable in the model which is perceived behavioural control defined as the perception of how difficult or easy an action is to perform for a given subject. As Ajzen (1988) has pointed out, perceived behavioural control is strongly linked to the concept of perceived selfefficacy (Bandura, 1994) which in this study is investigated together with subjective norms and attitudes.

5. Procurement and allocation of critical resources.

6. Development and maintenance of an innovative environment.

Kickul & D’Intino (2005) claimed that many entrepreneurial models may be improved by including the concept of self-efficacy. They add that entrepreneurial self-efficacy helps better understand entrepreneurial intentions and the conditions under which these are translated into action. Individuals with efficacy perceptions about starting a business set higher goals and are more persistent and resilient.

Jung et al. (2001) studied entrepreneurial activity from a social psychological perspective focusing on the social environment as provider of a favourable or unfavourable context within which entrepreneurship may take place. Similarly, subjective norms relate to the perceived social influences/pressures to enter or not to enter in a given behaviour (Ajzen, 1991).

Obschonka et al. (2012) in a study on entrepreneurial intentions write that these intentions are predicted by subjective norms particularly amongst participants with high group identification that are typical of a collective culture (similar to the culture within which this study is being based). Authors conclude that results illustrate the long-neglected importance of identification with, and social cohesion within, peer groups for the transition to entrepreneurship.

This study involved 23 female Emirati business undergraduate students from a Higher Education Institute in the UAE who are currently engaging in entrepreneurial activity. Therefore entrepreneurial activity was part of the selection criteria for participation in the study. The students volunteered to participate in the research and were given a paper-based questionnaire to fill in.

To measure the level of entrepreneurial self-efficacy, this study used the questionnaire by De Noble et al. (1999) together with a questionnaire on subjective norms that included items from questionnaires that have already been tested for validity and reliability.

There are six dimensions in the concept of Entrepreneurial Self-Efficacy developed by De Noble et al. (1999), including developing new product and market opportunities; building an innovative environment; initiating investor relationships; defining core purpose; coping with unexpected challenges; developing critical human resources. Reliability tests show that this scale is reliable to measure the Entrepreneurial Self-Efficacy with a Cronbach alpha of 0.953 (Setiawan, 2014).

The data analysis for the study is comprised three sections. We first present basic validation measures. We then describe the PLS SEM covariance model and initial results and then finish off with a PLS analysis which uses boot-strapping. The data for our study includes only 23 entrepreneurs so we chose to test our hypotheses using PLS covariance analysis. This is the preferred methodology for exploratory studies which have small data sample (Chin, 1998) where normality assumptions for the data are violated. An additional advantage of the covariance based PLS analysis is the ability to use a bootstrapping methodology to generate additional subsamples. This helps in carrying out exploratory analysis to test if a larger sample, where normality assumptions have been fulfilled, would likely show significant results. The analysis was done with standardized data in order to try and minimize multi-collinearity (common method bias) in the data.

The initial validation of the data was done with basic descriptive statistics in SPSS and a test of the validity of the constructs by generating the Cronbach-alpha. We removed several items which reduced the degree of convergent validity in our scales. With the exception of Subjective Norms which has 4 indicators all other constructs had 5 or 6 indicators.

The Table 4 below shows the scale reliability results for each construct.

Even with the small sample (n=23) all of the constructs have a reliability measure greater than the acceptable threshold of 0.7.

We operationalized the PLS-Structural model with Smart PLS using the scale items which were validated in the first part of the analysis.

The test of the full model shows several important findings about the model. First is that Entrepreneurial Attitudes and Behavioural intention are so closely related that the variance between them dwarfs the variance from the SN and SE constructs. Even though we did basic scale reliability analysis, some of the item loadings show very weak loading and are not contributing meaningful variance. The model tested is shown in the Figure (Figure 1) below. 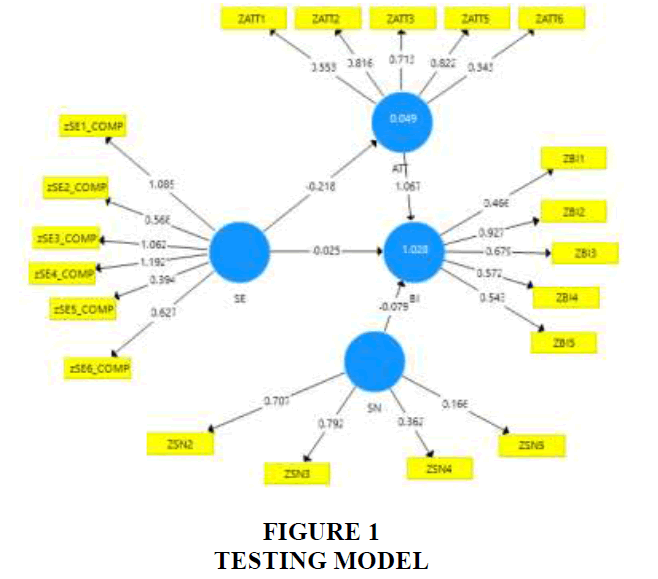 Removing those items and running the analysis again did not change the estimated coefficients in any substantial way.

We then carried out our analysis using a bootstrap method which generated 9999 samples (a number which is large enough to assume normality conditions) which allows generation of pvalues. The Figure 2 below provides a look at the estimated coefficients and associated p-values. 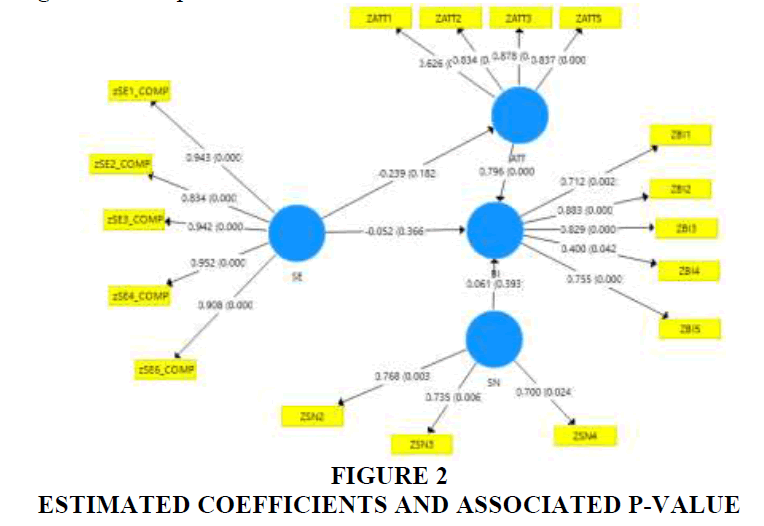 A possible interpretation of the results of this study, that would demand further exploration in a comparative study utilizing a larger sample size, is that the intentions of entrepreneurs and individuals who are not yet engaging in entrepreneurial activity are positively affected by different variables. Whilst self-efficacy and subjective norms may have a stronger and more positive impact in the stages leading up to entrepreneurship (Cavazos-Arroyo et al., 2017; Vinothkumar & Subramanian, 2016; Utami, 2017) attitudes may be more significant during the stages of actual entrepreneurship.

Similarly to the current study a study by Yap et al. (2013) highlights the importance of attitudes as exerting the strongest effect on intention within the Theory of Panned Behaviour, which is an extension of the Fishbein-Ajzen model used in this study. Authors state that attitude formation and change is an important concept in the fields of economics, psychology, social psychology, and marketing. Yap et al. (2013) claim that the attitude constructs is regarded as the core predictor of numerous behaviours and behavioural intention.

A main limitation in this study is the sample size. This study is an exploratory study and further investigation demands a larger number of participants. In addition, the findings in this study may be influenced by the operationalization of the independent variable of self-efficacy. The self-efficacy measure is a cohesive measure within its 6 dimensions notwithstanding the small sample size. However it does not relate to the attitudinal variable forming a cohesive model. What results is a fragmented model with attitudes showing the strongest link to entrepreneurial intentions.

In light of the results achieved in this study and the discussion above, a further recommendation is a comparative study between entrepreneurs and individuals who wish to be entrepreneurs, however, are not yet active entrepreneurs. This study would compare the effects of entrepreneurial self-efficacy, subjective norms, and attitudes on entrepreneurial intentions in both groups.

This study also serves to generate recommendations for service providers in the educational field. Education plays a very important role in shaping the attitudes of female entrepreneurs as well as their interest in starting new ventures (Wilson et al., 2007; Setiawan, 2014). The female participants in this study are all business study undergraduates and therefore are exposed to the type of education that is conducive to a favourable attitude and interest in starting new ventures. This type of education needs to extend to females who may not have chosen the path of tertiary education. For this reason education in innovation and entrepreneurship may also be integrated into the secondary level of education curricula.