Entrepreneurial Innovativeness and Its Impact on SMEs Performances

A vast literature is evident on the significant positive relationship between innovation and a firm’s success (Naranjo et al., 2016). Studies also find that innovation strategies increase the scope of firm success in today’s competitive world (Taghizadeh et al., 2016). Moreover, recently it was concluded that a firm innovativeness leads to the superior firm performance in turbulent business environments (Zawawi et al., 2016). Similarly, other studies have also demonstrated the positive impact of innovation on firm performance (Bartoloni & Baussola, 2018; Ribau et al., 2017; Gërguri et al., 2017; Tajuddin et al., 2015). Evidently innovation is believed to be one of the key drivers for the long-term success of a firm in the competitive markets (Naranjo et al., 2016). Relatedly, by realizing the importance of innovation for the success of businesses, this study attempts to investigate the influence of innovation on the four types of firm’s performances among Malaysian SME’s. Therefore, this study seeks to answer the question “what is the impact of entrepreneurial innovativeness on a firm’s performances namely, perceived financial performance, perceived non-financial performance, perceived business growth, and perceived performance relative to its competitors”? The next section of this paper deals with the review of the relevant literature.

This study uses the CBV to describe the concept of innovation for wholesalers and retailers. The CBV explains that firm can be developed, compete and achieve growth without the assistance of core technology, resource advantages, or market power (Luo & Child, 2015). The CBV focuses on how ordinary firms with common resources may attain superior business growth by effectively and creatively using the available open resources and distinct integrating capabilities that lead to enhancing the speed and a price-value ratio for large numbers of mass-market consumers. Therefore, the main idea of CBV is that firms can successfully compete and develop without the “benefit of resource advantages, proprietary technology, or market power” (Luo & Child, 2015) in today’s marketplace. Consequently, CBV can be considered as a theory of survivability.

Wholesale and retail SMEs operate in turbulent business environments where they face the critical issue of survivability because of intense competition within the industry. Therefore, it is very essential for managers and entrepreneurs to know how to survive in such a dynamic business environment. We feel that CBV can be very helpful to assist SMEs in their survival through existing resources. For instance, innovativeness has been considered as the key resource of SMEs, however, innovative practices in wholesale and retailing context, such as changes in packaging or appearance of existing products, improvement in quality for the existing products, introduction of the new products and services, and engaging new suppliers etc., are neither rare nor unique practices or resources and are easy to copy or are even substitutable by the rivals. Therefore, these types of common innovative practices that exist in almost all SMEs are easily accessible within the business environment. Thus, based on CBV, innovation is considered as an ordinary resource and as an independent variable of our research framework. Additionally, four types of firm performances, including perceived financial performance, perceived non-financial performance, perceived business growth, and perceived performance relative to competitors have been used as the dependent variables in this study’s conceptual model. The conceptual model is illustrated in Figure 1. 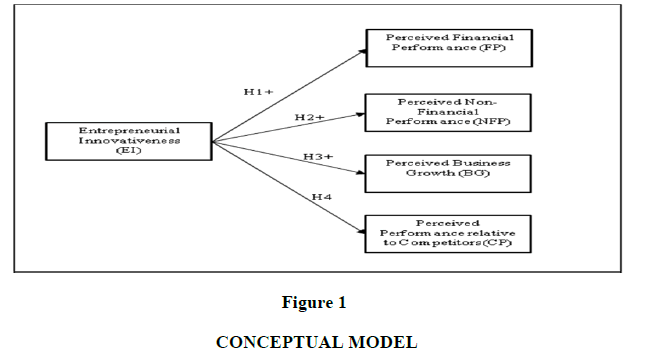 It has been widely acknowledged that innovation is a key source for achieving a competitive edge for all firms (Bilton & Cummings, 2009; Weerawardena, 2003; Bharadwaj et al., 1993). A number of studies have empirically found the positive impact of innovation on financial performance of firms under various contexts (Wang, 2014; Bigliardi, 2013; Laforet, 2011). For instance, it was found that financial performance of firms increased with the increase in innovation level in the context of the food machinery industry (Bigliardi, 2013). Innovations result in positive outcomes such as the good image and reputation of SME’s, as well as an increase in cost benefits and operational efficiency leading towards superior financial performance (Laforet, 2011). Likewise, a longitudinal survey of 607 high-technology firms also indicated innovation as the key driver of firm performance (Wang, 2014). Moreover, innovativeness aids firms in developing new capabilities that allow them to attain superior profitability (Hogan & Coote, 2014; Calantone et al., 2002; Sadikoglu & Zehir, 2010). Although the impact of innovation on firm performances has been studied in various contexts, studies on innovation in the retail context are lacking (Djellal & Miles, 2013; Drejer, 2004). Nonetheless, firms that are involved in various innovative behaviours can realize positive performance outcomes (Hogan & Coote, 2014). Consistent with the above arguments, the following hypothesis on the direct and positive influence of innovativeness on perceived financial performance is articulated:

H1: Innovativeness has a positive impact on perceived financial performance.

Firms practicing innovativeness are able to respond to the needs of their customers (Sadikoglu & Zehir, 2010; Calantone et al., 2002). Thus, only satisfied customers will again purchase the products and services from the firm whose innovative practices have satisfied their expectations and needs. Therefore, it can be said that innovation leads to customer satisfaction and retention. Moreover, when the organisation is successful in satisfying and retaining their customers for the long term due to their innovative practices, this results in superior financial performance. This superior performance could then lead to managers and owners achieving increased work-life balance. However, the link has still not been fully studied in the retail sector. However, there is evidence in existing studies that innovation has a positive influence on customer satisfaction and retention. Thus, based on the above discussion, the associated hypothesis is as follows:

H2: Innovativeness has a positive impact on perceived non-financial performance.

H3: Innovativeness has a positive impact on perceived growth performance.

Currently, firms are operating in environments that are characterized by changing customer demands, ever increasing global competition, uncertainty and rapid technical changes (Droge et al., 2008). Therefore, it is critical for firms to achieve success and competitive advantage in through innovation (Prajogo & Ahmed 2006). This is because innovative firms are more flexible and can quickly respond to change (Drucker, 1998). Dynamism or dynamic environments demonstrate the uncertainty in customer demands and the unpredictable actions of competitors. Therefore, firms in turbulent business environments usually strive to innovate their products by various means in order to meet the unexpected demands of customers and to compete successfully within their respective industry (Prajogo, 2016; Lumpkin & Dess, 2001). Many studies have highlighted that dynamic and competitive business environments create a driving force on the innovative practices of firms (Baron & Tang, 2011; Wang & Chen, 2010; Freel, 2005). This is due to the ever-changing tastes and preferences of customers and the actions of competitors which require firms to use innovative practices to respond to such threats (Prajogo, 2016; Tripsas, 2008; Tidd, 2001). Thus, the innovative practices used by the firms may actually impact firm performance relative to their competitors in uncertain business environments. In light of the above arguments, the following hypothesis was developed:

H4: Innovativeness has a positive impact on perceived performance relative to competitors.

For reliability, we examined each item’s loadings and composite reliability. For validity, we examined average variance extracted (AVE) for convergent validity (AVE>0.5) and the heterotrait-monotrait ratio of correlations (HTMT) for discriminant validity (HTMT<0.90) based on the recommended value by Henseler et al. (2015) accordingly. The satisfactory result for the measurement model was found due to its adequate reliability, convergent validity and discriminant validity. The following section presents the structural model analysis and hypotheses testing.

Assessment of the Structural Model

Idris, A. (2010). An Inter-Ethnic study of gender differentiation and innovativeness among women entrepreneurs in Malaysia. South African Journal of Business Management, 41(4), 35-46.

Juri, K.A.M. (2009). The relationship between cultural values and innovativeness: A study of malay and chinese entrepreneurs in Malaysia (master’s thesis). University of Malaya, Malaysia.

Martínez, R.J.A., Tamayo, J.A., & Gamero, J. (2017). Innovativeness and its influence on growth and market extension in construction firms in the Andalusian region. Journal of Engineering and Technology Management, 43(3), 19-33.

Prajogo, D.I. (2006). The relationship between innovation and business performance a comparative study between manufacturing and service firms. Knowledge and Process Management, 13(3), 218-225.