Features of Entrepreneurial Activities Indice in the world: Trends and Prospects

Nowadays, the urgency to research the entrepreneurial activities of all business entities has been a big trend. First of all, to identify the special role of entrepreneurship in accelerating the transition to of an innovative economy, to analyse the need for a wider use of entrepreneurship as one of the strategic resources of the Russian economic development. Secondly, to contribute to the completion of the conceptual framework formation for the theory of entrepreneurship.

Entrepreneurial activities in general, and each of its characteristics, is characterized by basic features: innovation and setting one’s own current goals based on the purpose of changing the market situation (pro-activity); initiative and sustainability in achieving the goal (effectiveness, as opposed to passive action); focusing on overcoming the internal and external barriers of environmental uncertainty in their market to achieve their goals. (transversality as opposed to adaptability); riskiness and ability to act in accordance with the existing and nonstandard economic situation (in contrast to reactivity as an answer to a previous market or intracompany situation) (Stasyuk, 2008).

Although there are lots of criteria in order to evaluate the entrepreneurial activities in a country level, but this diversity makes it more fuzzy as there are some different outputs for each of these factors in real world. Below some examples of these factors are presented.

Many researchers try to use the data prepared by Global Entrepreneurship Monitor to do analysis on country or a group of countries. Some researchers have done analysis on multi country level. For example, Wach and Krzysztof (2015) conducted a research on the countries of European Union according to GEM 2013 report or Alexandrova and Verkhovskaya (2015) studied this issue on Russia, again using GEM data. They evaluated various groups of factors affecting new businesses in Russia and finally mentioned that individuals' perception factors are the strongest tool in prediction of the individual's ability to show entrepreneurial initiatives in this case.

Hessels et al. (2008) also used the GEM 2005 report for evaluating some criteria including, motives for starting one's own business and the level of social security of a country on predominance of entrepreneurial aspirations in 29 countries around the world and finally they suggested these factors as most influencing factors on entrepreneurial intentions of citizens of these countries: country's focus on innovation, expectations of job growth and export orientation as indicators of entrepreneurial aspirations (Hessels et al., 2008)

Similar studies on different countries were done to evaluate some key global trends in the business environment of countries such as Wennekers et al. (2002) and Amorуs et al. (2013) or Bosma & Schutjens (2009).

Despite all these studies and development of too many different indices for evaluating entrepreneurial activities in different contexts, there is still a need for a more global and unique criteria to be used in global decision making. This gap was also mentioned by some other researchers indicating the need for sounder basis for internationally comparable indicators of entrepreneurship (Hoffmann, 2007)

In this regard this research goes a step further and after some analysis on GEM Reports, delivers a more simple choice on these criteria and proposes that use of two final indices can give a complete view on entrepreneurial activities around the world and decision makers can decide according to these ones.

The practical experience of international entrepreneurship accumulated during the transformation years has not yet received an appropriate theoretical generalization, which include its state regulation and stimulation of desired directions for the improved progress of the national economy. This is the main reason why the proposed research topic was chosen to be investigated. To be specific, this research aims to reveal trends in the development of entrepreneurial activities worldwide (N=140).

The following methods were used as a methodological basis for the study. Since it was not clear at the initial stage which system of factors allows us to describe the correlation matrix to reduce the dimensions of the parameters, we decided to use the exploratory factor analysis of the principal component methods, and varimax rotation of the factors to construct the scattering histogram. During the factor analysis, 25 factors are studied in a dynamics over three years. In addition, to investigate the relationship between the data of different years, we used a correlation analysis. In order to identify similar objects in the sample under study, cluster analysis was carried out using the closest similarity method to construct a dendrogram. Global Entrepreneurship and Development Institute is chosen as the research database.

There are lots of indices for evaluation of entrepreneurial activities. Here some of them are shortly presented.

Global Entrepreneurship Index (GEINDEX) that "captures the essence of the contextual features of entrepreneurship and fills a gap in the measure of development" (Zoltan and Szerb, 2009). The GEI measures both the quality of entrepreneurship in a country and the extent and depth of the supporting entrepreneurial ecosystem and has two different aspects namely a Rank and a Score.

Opportunity perception index as an answer to this question: Are entrepreneurs motivated by opportunity rather than necessity and does governance make the choice to be an entrepreneur easy? (Uhlaner and Thurik, 2007)

These factors as well as some other factors are introduced by GEM as Global Entrepreneurship Development Index (GEDI, 2018). Here are some more main factors in this model according to three different dimension of the evaluation model:

4. Below you can see our initial 22 factors for entrepreneurial activities evaluation according to GEM.

The factor analysis is carried out for the duration of three years (2016-2018). Based on the results of the analysis of factors for 2016, the following results are observed.

The factor structure of the 22 parameters is reduced to 5 factors identified according to the Kaiser criterion and the result is shown in Table 2.

According to the analysis of above table, five factors were identified, and the factor loads for them is presented in Table 3.

Considering the dynamics of the factor load from the above 5 parameters, we present the result in the Table 4, for years 2016 to 2018.

As a result of the analysis, it is necessary to conclude that the influence of the first three factors is not stable. Note that the factor load for the first and second factors does not show system reduction, while the one for the third factor stably increases.

In order to conduct cluster analysis and construct a scattering histogram, the factor structure of the 22 parameters was reduced to 2 factors (Tables 5 A & B), isolated according to the Kaiser criterion. This factor structure explains 74.6% of the total variance of the data. In other words, 74.6% of the final results can be explained by identifying 2 factors, and the remaining 25.4% of the final results are explained by other factors that are difficult to isolate into groups.

According to the analysis of Table 5, two factors are identified; factor loads are presented in Table 6.

The visual distribution of the scales is shown below in Figure 1. As can be seen, they are distributed at two opposite poles of the two-factor model, i.e. they are fundamentally different. 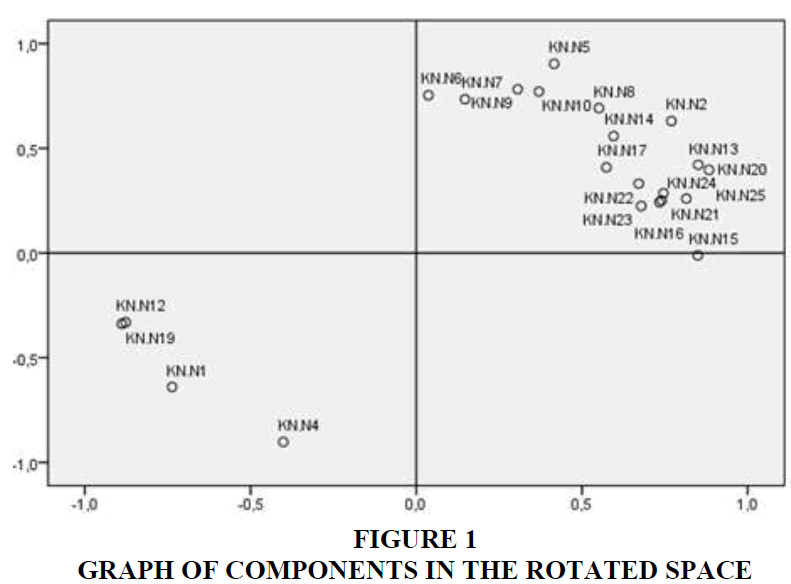 Figure 1: Graph Of Components In The Rotated Space

Then, based on these indicators, a scattering diagram is constructed and presented in Figure 2. 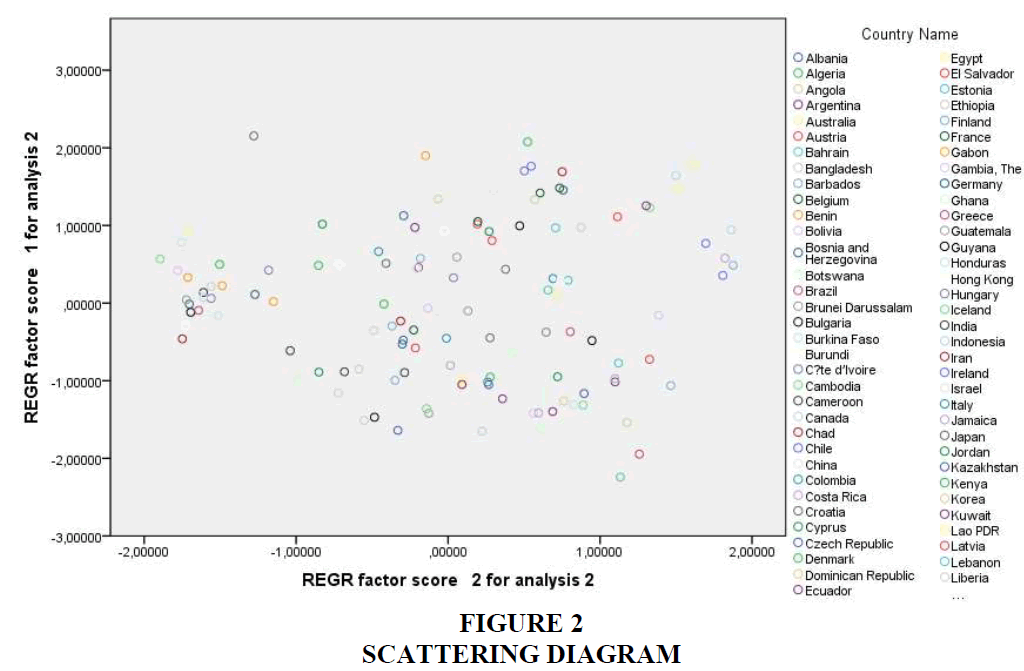 On the basis of this diagram, it is not advisable to single out any clusters. Assuming that all countries can be divided into 4 clusters, the dendrogram can be represented as follows (Figure 3). So the first cluster includes almost all countries except Japan, Panama and Poland. 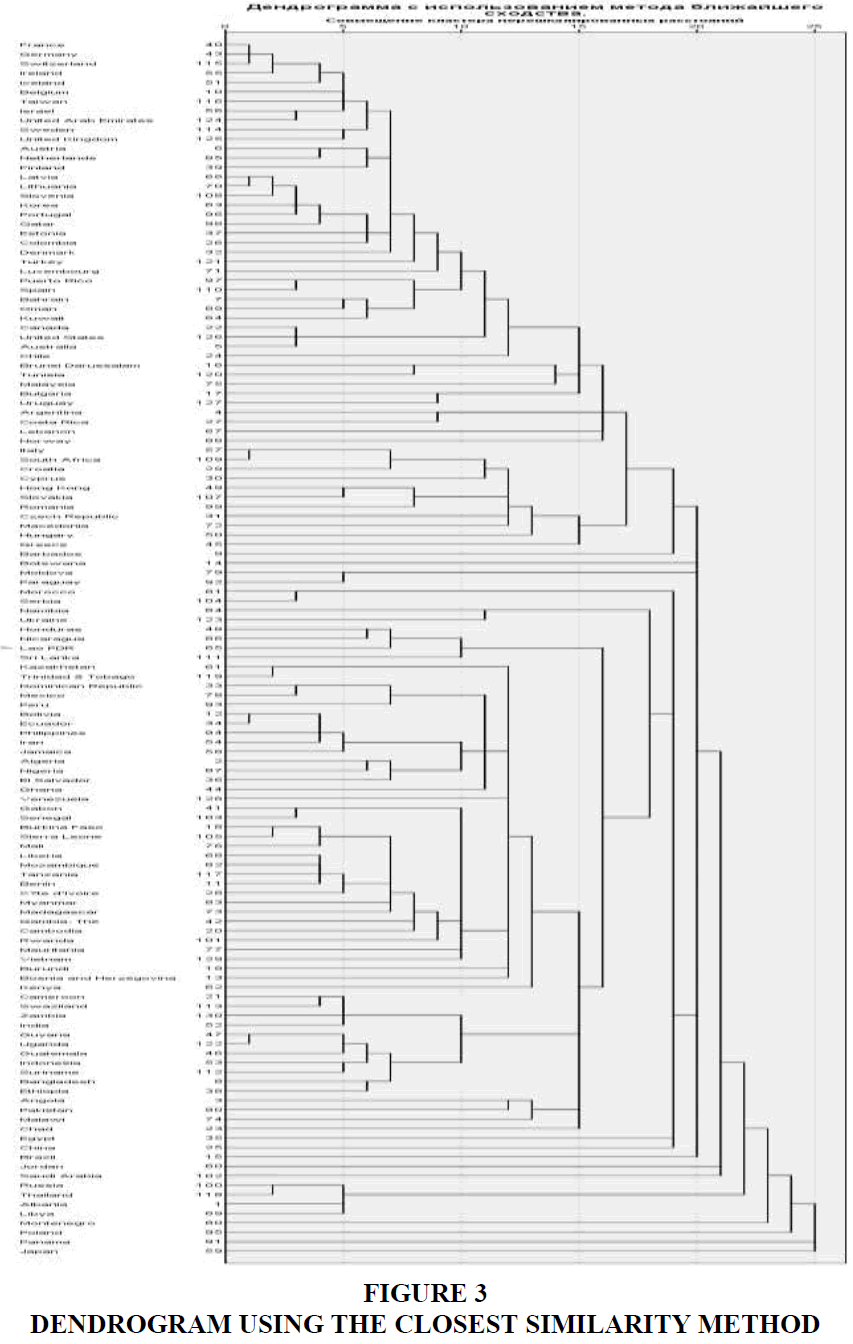 Thus, all countries will fall into the first cluster except for (2-Japan, 3-Panama, 4-Poland). Therefore, based on the analysis of the dendrogram, it clearly shows that it is not possible to single out clear clusters of countries.

To study the relationship between the data of different years, a correlation analysis was carried out. The data is presented in the Table 7.

To predict the values of the Indicator from the available data by year, we use regression analysis.

Using SPSS 19 regression analysis is performed. As a result of the analysis, we have obtained tables with the total values of the model, the variance analysis, and the coefficients. Let us consider each table separately. In Table 8, the summary of the model is presented.

Regression analysis revealed that the coefficient of multiple correlation (R) between “Indicator” parameter and “Year” parameter is 0.451. This is an evidence of the existence of an average strength relationship between these parameters.

A high multiple determination coefficients were obtained, its value being 0.202. This indicator implies that the regression model can account for 20.2% of the variance of the dependent variable (Indicator), the remaining 79.8% of the variance being due to other factors. In next step, the results of the variance analysis are considered in Table 9.

The significance level of the value of the F-Fisher criterion is statistically significant (F=140.884, p<0.01), which is an evidence of the fact that the model can be meaningfully interpreted. Consider the final table with the values of non-standardized coefficients as Table 10.

Substituting the values from the table, we get:

As mentioned before, many different researchers have tried to investigate the entrepreneurial activities in different countries (Wach and Krzysztof, 2015; Alexandrova and Verkhovskaya, 2015; Hessels et al., 2008; Amorуs et al., 2013; and Bosma & Schutjens, 2009) and they mainly have used data provided by Global Entrepreneurship Monitor, which includes lots of different and diverse criteria. But this research tries to reduce this huge number of, sometimes conflicting, criteria to some lesser numbers to give researchers a better, more accurate and more user-friendly criteria.

The study shows that the following factors determine the significance for entrepreneurial activities worldwide.

In addition, a notable factor is the one including the following parameters: access to capital for individual and institutional investors, entrepreneurial aspiration to introduce innovations, the level of entrepreneurs' education, and geographic concentration of entrepreneurs. This group of parameters explains about 20% of the final results. Also, it is worth noting that parameters such as the desire of entrepreneurs to enter global markets; the country's ability to develop new products, also explain about 11% of the final results, and in this way the value of this group of parameters is increasing. The fourth group includes the following parameters: creation of unique products; aspiration to growth (accounting for 9% of results). The fifth group (application of information technology, biotechnology) accounts for about 5% of the results.

Cluster analysis is based on a two-factor model including two factors. The evaluation of this model has shown that the parameters that make up each factor are fundamentally different. The first factor includes the following parameters: the desire to introduce new products, entrepreneurial abilities related to start-ups, the size of the technology sector, access to the capital of individual and institutional investors, the quality of the entrepreneurial environment, the desire of entrepreneurs to enter global markets, the level of entrepreneurs' education, motivation of entrepreneurs, and creation of unique products. The second factor includes: geographical concentration, the entrepreneurial skills of the population, risk-readiness. The scatter diagram and the dendrogram constructed on this basis show that, based on the existence of four clusters, it turns out that almost all countries (except Japan, Panama and Poland) are included in the first cluster.

Correlation analysis has been used to demonstrate the relationship between the indicators under consideration and the possible predictability of the results of the study. The constructed correlation model shows a strong direct relationship between the indicators considered. The constructed regression model shows that the indicators considered account for about 20% of changes in the business activity dynamics in the countries of the world. Thus, the predictability of the results is 20%.

Overall, this research presents a helicopter approach view on entrepreneurial activities' indices all around the world and providing a trend analysis for future of this criteria is also another contribution of our research.