Despite of family business ubiquity (Astrachan & Shanker, 2003; La Porta et al., 1999) and more of two decades of research efforts the investigation of this entity is still early in its development. Continuity and renewal have been mentioned as the reason d’être of family businesses in their pursuit of longevity. To achieve sustainable business performance and harmonious family relationships, family firms should transition toward more formal structure and processes as growth and succession occur. The most popular concept in the literature to describe this transformation is professionalization that has emerged as an important topic (Zahra & Filatotchev, 2004). The family business literature that stems from both academics and practitioners has stressed the need of professionalization. However, professionalizing has been identified as a key challenge for family businesses as many family firms are neither willing nor able to advance a professionalization agenda (Stewart & Hitt, 2012).

This conceptual paper investigates the following research question: How do professionalization needs of a family business evolve as it moves along its life cycles? The goal is to identify the professionalization priorities for each stage of the life cycle. The complexity stems from the overlapping of family, ownership, and business sub-systems. For example, some of the business professionalization priorities might be seen as threats to the family’s socioemotional wealth. The focus of the paper is on closely held entrepreneurial family businesses. The family business definition used in this paper comes from Kelly et al. (2000). According to this definition, a family business has significant family ownership, significant family involvement in management, and the expectation that control and leadership will be passed to future generations. To answer the research question and to develop the conceptual framework of family firm professionalization, the paper draws on the organizational life cycle theory (Churchill & Lewis, 1983; O’Rand & Krecker, 1990), and the theoretical and empirical perspectives on family business professionalization. These findings are supported by empirical evidence based mainly on secondary sources as a result of an extensive literature review. From an academic perspective, the aim of the proposed framework is to advance the investigation of an important family business topic that has been identified by scholars as an area where additional progress is needed. From a practitioner’ perspective, the framework would potentially guide family firms on implementing a professionalizing strategy with corresponding steps across different life cycle stages. For a company it would be beneficial to be prepared to cope with the challenges ahead as every stage of the organizational life-cycle brings along a new entity that deals with different business, ownership, and family issues.

Life cycle is among the most popular concepts in social sciences (O’Rand & Krecker, 1990). The organizational life cycle concept focuses on the evolution of business from a growth perspective. It defines the evolution of an organization through a sequence of stages that moves the company from a start-up to a mature and larger company. The organizational life-cycle theory was initiated within the economics literature (Penrose, 1959; Rostow, 1960), as inspired and borrowed from biology, and further refined by business researchers starting with Chandler (1962) as the pioneer of the organizational life cycle concept, and continuing with numerous others such as Greiner (1972), Adizes (1979), Kimberly & Miles (1980), Churchill & Lewis (1983) and Kazanjian (1988). As a result, a vast array of models that spread between three (Smith et al., 1985) and ten stages (Adizes, 1979) was developed. While there is little agreement on the number of stages, the models share many common characteristics on the evolution of the business as a sequence of predictable stages and on the nature of various stages (Dodge et al., 1994). A major strength of this literature is that it adds to our understanding of the intricate process of growth (Kazanjian, 1988). The research has pointed out how challenging is to capture the firms’ life-cycle and to define universally accepted stages of firm’s evolution. As Penrose (1959) argued, growth patterns display an idiosyncratic nature due to the unique combination of resources and capabilities of every firm. According to Fisher et al. (2016), “all life cycle models convey similar ideas, yet the context within which different models were developed varies”.

The research so far has focused more on how this framework could help understand better entrepreneurial ventures by stressing the differences across every stage of their life cycle. Acknowledging that the family is the oxygen that feeds the entrepreneurial fire (Rogoff & Heck, 2003) the organizational life cycle should be an important tool to investigate family businesses as well. Moreover, according to Moores & Mula (2000), the examination of firms’ transitions, including family businesses, stems from the organizational life cycle. We apply the systems theory and expand the organizational life cycle model focused on the business dimension by adding the ownership and family dimensions of the family business system according to the Tagiuri & Davis (1982) three cycles model. Understanding the family business life cycle requires the investigation of all three sub-systems due to the overlapping of business, family, and ownership. For this paper, the ownership and family life-cycles stem from an adapted version of the family business developmental model of Gersick et al. (1997) while the business life cycle is a modified version of the Churchill & Lewis model (1983). For the business dimension we prefer Churchill & Lewis model (1983) instead of the Gersick et al. (1997) business development model. While the latter model is simpler with just three stages, the former is more an “ideal” or “rational” life cycle model due to its growth preparation stage. The entrepreneurial literature shows that growing too fast is an important cause of new venture failure. Adding the growth preparation stage supports the idea of professionalization as the company that follows the adapted Churchill & Lewis model might be better positioned to face the growth stage challenges (Figure 1). 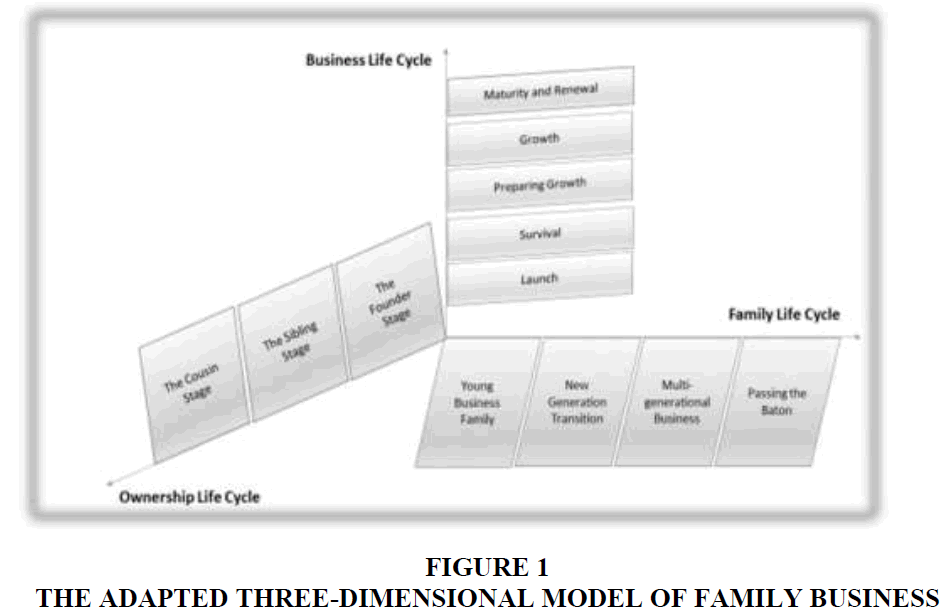 Every organization undergoes a continuous process of change and aging. For a family business the web of changes is tridimensional due to the overlapping of the three-cycle model of family business composed of family, business, and ownership (Tagiuri & Davis, 1982). Therefore, creating a model that capture the complexities of the family business system, where in each stage of the tridimensional model you encounter a predetermined set of issues, is quite challenging. Adapted from the Churchill & Lewis model (1983) the five stages of the organizational life cycle are launch, survival, preparing growth, growth, and maturity-renewal. The corresponding professional issues are identified for each stage. It seems that there is a certain theoretical support in the literature for a five-stage model as some of the most popular models and their empirical support tends to highlight the five-stage models. Tables 1-3 summarize the top professionalization priorities in different stages of the business, family, and ownership life cycles.

As business, family, and ownership evolve across their life cycles, a more formal context is needed to allow the firm to advance to the next level (Flamholtz & Randle, 2015). The main theme of the business life cycle is preparing and adapting the firm to the challenges of each stage that leads to a different organization. In this process, fostering the family and non-family managerial talent is essential. Professionalization is the key ingredient that supports continuous growth. The business dominates all the aspects of the family life. Typically, growth triggers the need of continuous professionalization. Growth brings a new level of competition as the company might move away from smaller niche markets into more competitive markets. This brings a new challenge on how to compete in these new tougher markets. Therefore, the need of professional strategic planning emerges in the growth stages and becomes crucial in the maturity-renewal stage. Leadership development is essential as under the entrepreneurial model the new business is often launched based on the founders’ abilities to provide a service or make a product and less on their capacity to manage. In the maturity stage nonfamily talent becomes even more important. The family businesses face the strategic choice of growth or maturity. If growth is not pursued or not achieved the maturity stage installs with the risk of decline if the business is not able to adjust to the changing environment. The research has proved that many family businesses are slow to recognize the need to reinvent them as they strive to preserve the socio-emotional wealth (Gómez-Mejía et al., 2010). The professional human resources practices play a key role in the formalization of a business as formal job descriptions, performance evaluation, hiring, compensation, and promotion policies could emerge as a source of conflict between both the family members and the family and non-family members.

The main theme of ownership life-cycle is ensuring the efficiency and continuity of the business while stressing the fairness of its activities. For example, defining the power structure is meant in the sibling stage to ensure harmony and mitigate conflicts. The cousin stage brings more ownership complexity as the kinship of the owners could span over three generations and are related not just by blood but by marriage as well. The ownership stages play an important role in shaping the future of the business as the ownership structure will impact directly not just the ownership dynamics but also the family. It is mainly achieved through the introduction of the governance bodies and formal structures such as councils and boards (Pérez de Lema & Duréndez, 2007; Suáre & Santana-Martín, 2004). Clearly defined roles and power structures during the sibling stage becomes a priority in order to avoid future conflict.

Further research needs to bring evidence that supports not just the top professionalization issues across the three subsystems life cycles but also the specific causes that triggers the professionalization steps of each stage. Professionalization beyond a certain level transitions into bureaucracy defined as where formal standards dominate. Consequently, this might affect the family business values and business practices and, as a result, the decline of the company would inevitably follow. The challenge is to embrace professionalization without affecting the entrepreneurialism of the company that allows it to capitalize on opportunities, reinvent itself and continue to grow. An internal focus is predominant throughout the paper. However, there are important external variables that influence the professionalization processes. Those external variables such as general environment or industry-based factors were not considered for the scope of this paper.