The development of Muslim fashion business in Indonesia continues to increase. The data shows, the number of Muslim fashion people in business, especially in West Java province also continues to grow, but its performance fluctuates. This research, purpose to reveal the effect of applying innovation on business performance through value creation. This research used a descriptive survey method with verification approach through Partial Least Square (PLS) analysis. This research used 30 women's fashion Muslim entrepreneur sample in West Java Province. This research has resulted that there is significant influence between innovation applied to business performance through value creation.

Currently, the market of Muslim fashion products Indonesia is very potential and still has room to work with the maximum and planned. Therefore, cooperatives, micro, small and medium enterprises producing fashion products should be able to take advantage of these opportunities (Budiman, 2017). Similarly, in the province of West Java, because the current Muslim fashion is in demand by people, especially Muslims, namely that the number of people in the province of West Java is Muslim is the most that are about 40 million (BPS, 2016).

The growth between MSME in general with Muslim fashion UMKM from 2010 to 2015, especially in the year 2015 which is experiencing a decline, it is pointed out the findings of the slowdown of the national economy, but there are allegations of declining business performance. This decline is assumed that competitiveness is still lacking and most have not yet penetrated the export market. This shows the competitiveness of business actors, especially the UK is still low, especially in creating products that have value and then this is allegedly due to the creation or creations of less good value.

The research by (Suryana et al., 2016) says that value creation can affect business performance; it shows that business performance on SME scale is highly dependent on the success of value creation as a business strategy. Creation of value can be formed if the business actors, especially MSMEs often innovate their products, this is in accordance with the research Alshammari et al. (2014), it is revealed that the underlying competitive advantage is the need to increase the ability of small companies in creating uniqueness and need to apply the concept of learning culture to be a driver to gain high added value in value creation and organizational innovation. Some understanding of Muslim fashion business related to innovation and creations value to be able to develop entrepreneurial marketing values to be competitive and can improve small and medium business community against Muslim fashion products. So this study aims to determine the implementation of innovation and value creations in improving the performance of fashion business in Indonesia.

At present, the application of innovation in a business needs to be done, because an entrepreneur who is always innovating, he can be said to be an innovative entrepreneur. Someone who is innovative will always try to make improvements, present something new/unique that is different from the existing one. As for the concept that innovation is a process of renewal from the start of input to the output so that it will produce a performance (Kemp et al., 2003). Furthermore, Hills (2008) revealed that innovation could be defined as ideas, practices or objects that are considered new by an individual or another user unit. Baregheh et al. (2009), reveals that innovation is a process where organizations transform ideas into products, services, new processes to advance, compete and differentiate themselves successfully in the market.

Innovation also needs to be done in the scale of small and medium enterprises (SMEs), as revealed by Baregheh et al. (2012), that innovation is an exploration activity in the business sector on a specific scale of SMEs, based on level and type through employee innovation and agreement supporting innovation orientation or organizational innovation. But basically innovation is possible to improve the performance of both organization and business as expressed by Hassan et al. (2013), that a novelty of an idea to improve the performance of the organization through the decomposition of the type of innovation that is product innovation, process, marketing and organization to various aspects company performance. Furthermore, Hamali et al. (2015) revealed that innovation is a change that is measured through product renewal, marketing, process and organisation. Marketing also needs to innovate, as revealed by Rosmayani et al. (2016) innovation is a creative process that becomes the key for the company to be able to achieve competitive advantage by using Input Innovation measurement, Process Innovation, Innovation of output. So in this research can be revealed that innovation in small business is one important factor in running entrepreneurship and also become one of important strategy in running a business by expressing an idea about the novelty of the product, production process, and how to market it.

Value creation is a process related to innovation that can increase benefits for consumers (Priem, 2007). The value will also be created if customers get the benefits of a product or service can be said to perform in accordance with what is expected by customers, so it can be said that this customer value is a trade-off between the total benefits received with total sacrifice. Nasution & Mavodo, (2008). So this study revealed that the creation of value is a process conducted by UK actors who were born from innovation by providing benefits in accordance with customer needs to achieve mutually beneficial marketing objectives. Furthermore, the creation of a long-term value creation can be realized based on the potential effect of the company, leading to cost reduction or increase in profit (Hammann et al., 2009), so we can examine that increased business performance can be achieved if it has applied value creations appropriately (Suryana et al., 2016).

Despite recent evidence which shows that family businesses are a group of heterogeneous companies with different levels of family involvement in the business (Chrisman & Patel, 2012; Garcia-Castro & Aguilera, 2014; Samara & Mirabent, 2018) and that the Collectivist culture is an essential institutional setting that affects the success or failure of governance mechanisms in family firms (Pagliarussi & Rapozo, 2011; Sharma & Manikutty, 2005), little attention has been devoted to these important contingencies when discussing the effect of independent directors on family business performance. To address these gaps, this paper aims to explore the following question: in a Collectivist culture, how do different family business governance contingencies shape the effect of independent directors on family business performance?

This study used descriptive survey method by using a verification approach through Partial Least Square (PLS) analysis and using the Sobel Test formula which is a test conducted to determine whether the relationship through a mediating variable is significantly capable of being a mediator in the relationship (Sobel, 1982; Ghozali, 2011). The research was conducted in one of the city malls in Bandung. Where mall Balubur Townsquare is a mall that has Muslim fashion and has approximately 100 Muslim fashion, but Muslim fashion entrepreneurs who produce and market Muslim clothing there are only 30 women Muslim fashion entrepreneurs. This study uses a purposive sampling method with a questionnaire provided to Muslim fashion entrepreneurs. The test uses a Sobel test to test Value Creation as an intervening variable which can be seen in the following formula (Sobel test in Baron & Kenny, 1986):

After calculation through PLS analysis, the calculation results can be disclosed below by revealing that the evaluation of measurement model is judged from the validity and reliability of the measurement model related to the accuracy of the instrument in reflecting the concept of each latent variable. Namely based on convergent validity (loading factor) and alpha Cronbach. Reliability is evaluated with composite reliability and AVE. The value of convergence validity is the value of the loading factor on the latent variable with its indicators. Expected value >0.7. Data that has a composite reliability >0.8 sounds high reliability. Average Variance Extracted (AVE). Expected AVE value >0.5 and Cronbach Alpha. Reliability test reinforced with Cronbach Alpha. Value expected >0.6 (Nunnaly & Bernstein, 1994).

The structural model was evaluated by looking at significant coefficients, R2 and Q2 values. R Square on endogenous constructs. The R Square value is the coefficient of determination in the endogenous construct. According to Chin (1998), the R square values are 0.67 (strong), 0.33 (moderate) and 0.19 (weak). Prediction relevance (Q square), also known as Stone-Geisser's. This test is conducted to determine the predictive capability with the blindfolding procedure. If the values are obtained 0.02 (minor), 0.15 (moderate) and 0.35 (large), and only used for endogenous construction with a relative indicator (Figure 1). 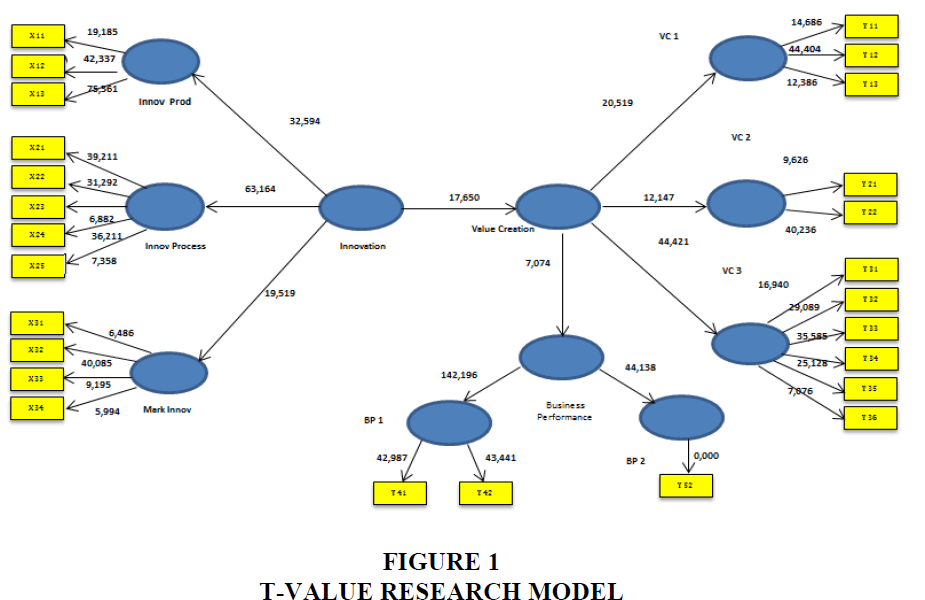 Table 1 above gives the value of R2 on the creation of value as the endogenous variable is in strong criterion (>0.6=strong), and all values of Q square are on the big criterion (> 0.35), so it can be concluded that experimental condition or fit model supports the research model. So it can be explained that the overall model of this study obtained the result that the model is fit, which in the sense that can answer the hypothesis in this study. The results of the research model can be poured in the following picture:

However, to see the t-value test then that is to see from the side of influence significance it can be seen in the picture below:

Based on the equation of formula above it can be explained that value creation influenced by innovation equal to 0,762 and business performance also influenced by creation value equal to 0,534. Caption for each hypothesis in the study, as follows:

X2.1=Development of the production process           Y2.1=Creating a unique Muslim Fashion

X2.5=Application of new technology in the production process           Y3.1=Maintaining relationships with customers

Y3.5=The intensity of having discussions with customers

Hypothesis testing can be seen partially in Table 2 below:

From the above results partially to the first hypothesis that, innovation has a significant influence on the creation of this value indicates that the significant value of 0.581, it means by having the value of innovation so as to increase the value creation of Muslim fashion products so as to attract public interest and can increase products of small and medium enterprises in west java. The results of this study concurred with research conducted by Hasan et al., 2013; Rosmayani et al., 2016 stated that innovation is a creative process that becomes the key for the company in reaching the superior products. The second hypothesis of value creations has a significant influence on business performance, where innovation has a great influence that is equal to 58.1% of value creation. This states that the increasing value of fashion product creations in small and medium business can improve business performance. The results of this study concurred with research conducted by Nasution & Manobo (2008) states Value will also be created if customers get the benefits of a product or service can be said to perform in accordance with what is expected by customers, so it can be said that this customer value is trade-off between the total benefits received and the total sacrifice.

Rauch, A., Wiklund, J., Lumpkin. G.T., & Frese, M. (2009). Entrepreneurial orientation and business performance: An assessment of past research and suggestions for the future. Entrepreneurship Theory and Practice, 33 (3), 761-787.