This paper aims to comprehend the policy variables underlying Official Development Assistance (ODA) projects conducted by the Korean Government from a systems point of view; to identify the causal loops (reinforcing and balancing loops) operating within the causal map explaining the whole process of the ODA projects; and to derive the main policy variables affecting the successful management of ODA projects, with regard especially to the projects being provided by the Korean Government, using the sensitivity analysis method. The paper employs the system dynamics method, which has rarely been used in the analysis of ODA projects. The analysis results show that there are six causal loops (four reinforcing and two balancing) operating within the whole causal map explaining the ODA projects executed by the Korean Government; and that a public body for controlling and managing Korea’s ODA projects (called control tower in this analysis) deserves special emphasis in constructing ODA-projects-related policies.

Since Korea first started to undertake Official Development Assistance (ODA) in 1987, the country has been striving to shore up its commitment by focusing on sharing technology and other know-how arising from its own rapid development. Ever since Korea joined the OECD’s Development Assistance Committee (DAC) in 2010, political demands have been soaring for the establishment of “Korean-style” assistance, despite the fact that every developing country needs a different model based on its own characteristics and contexts.

An aid recipient less than two decades ago, Korea is now an aid donor and is sharing its experience of how to use development co-operation as a catalyst for promoting long-term sustainable growth in other countries. In 2017, Korea provided USD 2.2 billion in net ODA, which represented 0.14% of gross national income (GNI) and a 6.5% increase in real terms from 2016. Korea is the twenty-fourth largest DAC provider in terms of its ODA as a percentage of GNI and the fifteenth largest by volume. Korea miss edits ODA/GNI target of 0.25% by 2015 for several reasons: the global economic down-turn, tighter fiscal policy in Korea and a change in the calculation of GNI. It has, however, set a new target of 0.30% ODA/GNI by 2030. To help reach this target, Korea plans to publish an ODA growth plan, with milestones. Korea’s share of untied ODA (excluding administrative costs and in-donor refugee costs) was 53.2% in 2014 (down from 55.1% in 2013), compared to the DAC average of 80.6%.

Nearly thirty years on, officials, scholars and activists are fiercely discussing how to redefine Korea’s ODA model. The topic is expected to deal with the issue of how to successfully implement ODA projects at the site (Conlin and Stirrat, 2008; Engel and Carlsson, 2002; Forss et al., 1994). Against this background, this paper aims to explore the critical variables affecting ODA projects; to construct a map explaining the causal relationships among the variables; to construct reinforcing and balancing causal loop diagrams; and to carry out sensitivity analysis using policy scenarios in order to identify the most important variable affecting cost-effective performance in relation to ODA projects.

Many research works have been produced on ODA studies both in Korea and abroad. Most of these, however, have dealt primarily with issues of fragmentation regarding ODA project implementation, ODA size, ODA effectiveness, etc. (Armytage, 2011; Heider, 2011; Holvoet and Renard, 2007; Martens et al., 2002; Morrissey, 2001; Picciotto, 2003; Prokopijević, 2007; Sasaki, 2006; Sasaki, 2008; Yasin, 2005). It is true that these research works have made significant contributions to ODA studies, but what is more important is how the donor countries can carry out the ODA projects more effectively at the site (Collier, and David, 2000; Cracknell, 2001; O’Sullivan, 2007; Paul et al., 2008). Over time, the amount of ODA has been increasing ever since the OECD’s DAC requested that DAC member countries including Korea should allocate 0.7 % of their GNI to ODA projects. Diverse ODA projects have been developed and in addition the recipient countries have demanded different projects fitted to their own countries (Collier, 2000; Engel and Carlsson, 2002; Kawai and Takagi, 2001; McGillivary, 2004; Paul et al., 2008; Pitt et al., 2010; Ram, 2004; Watanabe, 2003; World Bank, 1998). It is necessary for the donor countries to gain the know-how that is required for successful implementation of ODA projects (Khan, 2003; Kusek and Rist, 2004; Liese and Schubert, 2009; Liverani and Lundgren, 2007). In this regard, it is necessary to research ODA issues using different approaches and different perspectives from those adopted by previous studies. One of these different approaches is the system approach, and more specifically the system dynamics approach. The systems approach to ODA projects ascertains causal relationships among the variables associated with an ODA project, outlines the totality of our knowledge/information about ODA project management through causal loops (reinforcing and balancing loops) and enables us to conduct sensitivity analysis of these loops, providing information about which variable is most sensitive to the dependent variable, ODA outcome in this analysis.

The fundamental concept underlying the systems approach to ODA projects is explained in Figure 1. 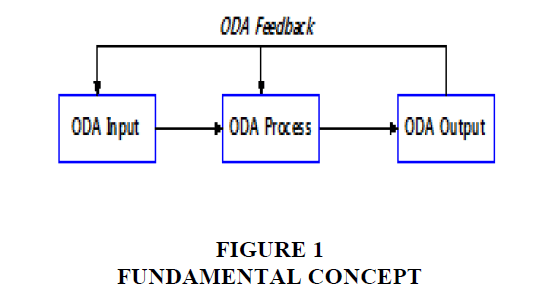 The systems approach to ODA projects is shown in more detail in Figure 2.

In building a causal map explaining the relationships among variables affecting the policy issues regarding ODA projects, it is necessary to consider certain variables in particular. These variables are selected on the basis of the theoretical reviews of existing studies on ODA. Table 1 shows the names of the variables and their explanations.

Assuming that ODA projects can be explained from a systems point of view, it is possible for the ODA project process to be depicted via a causal map. Drawing a causal map to explain the whole ODA project process enables us to comprehend the whole picture regarding the process involved in ODA projects and also to discover the relationships among the variables being operated in the ODA system. The causal map comprises reinforcing loops and balancing loops. If we identify the causal loops-reinforcing and balancing loops-we are able to understand the roles they play in the ODA system, and therefore policymakers engaged in ODA projects utilise them to help in attaining the objectives which the ODA projects are expected to achieve.

The first step in applying the system dynamics approach to ODA projects is to draw the causal map, including the numerous causal loop diagrams which can explain the relationships among the variables associated with the entire process involved in the ODA projects, ranging from agenda setting to the evaluation of the projects after they have ended.

Causal loop diagrams (CLD) are flexible and useful tools for diagramming the feedback structure of systems in any domain (Sterman, 2000). Causal diagrams are simply maps showing the causal links among variables, with arrows from causes to effects. Causal diagrams emphasise the feedback structure of a system. There are causal diagrams showing the information inputs into a particular decision rule. Policy structure diagrams focus attention on the information cues that the modeller assumes decision-makers use to govern the rates of flow in the system. There are two types of feedback loops, positive and negative. Positive feedback loops are called reinforcing loops and are denoted by a+or R, while negative loops are called balancing loops are denoted by a–or B (Sterman, 2000) (Figure 3). 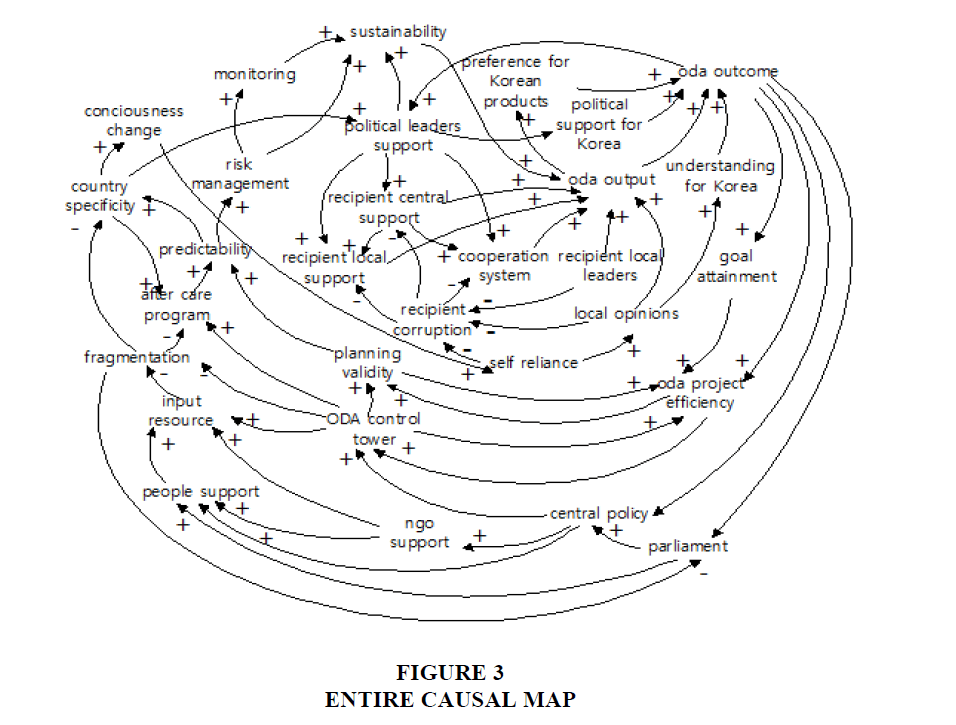 Here, we need to discover the reinforcing and balancing causal loops on the basis of the entire causal map depicted above.

This control tower loop indicates that if the capacity of the control tower to deal with ODA projects becomes stronger, then the fragmentation problem relating to ODA projects diminishes; in turn, the recipient country’s specificity becomes better reflected in the ODA project process, leading to that country’s political leaders’ support becoming stronger and its political support for Korea increasing, and finally to the ODA outcome becoming stronger (Figure 4). 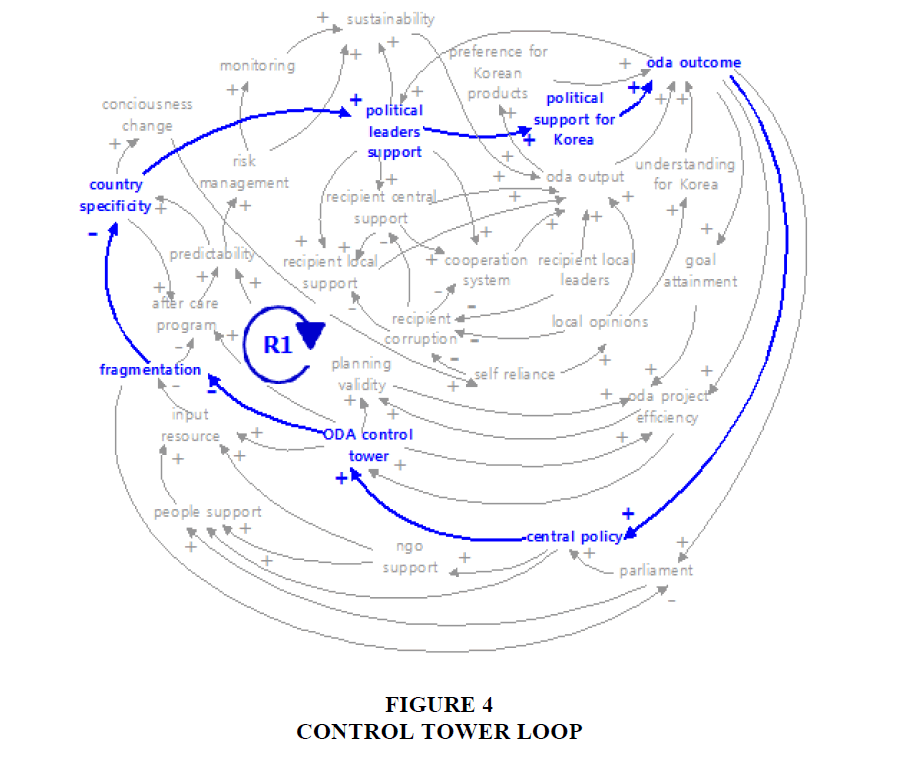 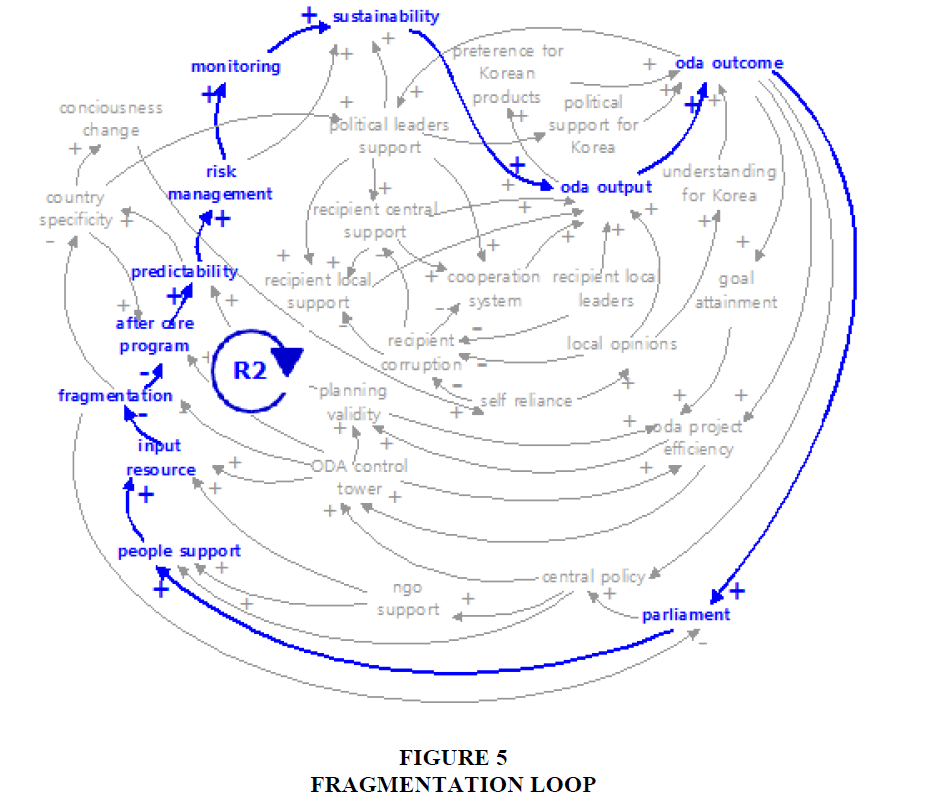 This central policy loop indicates that if central policy relating to ODA projects is well-designed and-supported, the ODA control tower gets to function well, the after-care programme regarding the ODA projects works well, and the ODA outcome is improved (Figure 6). 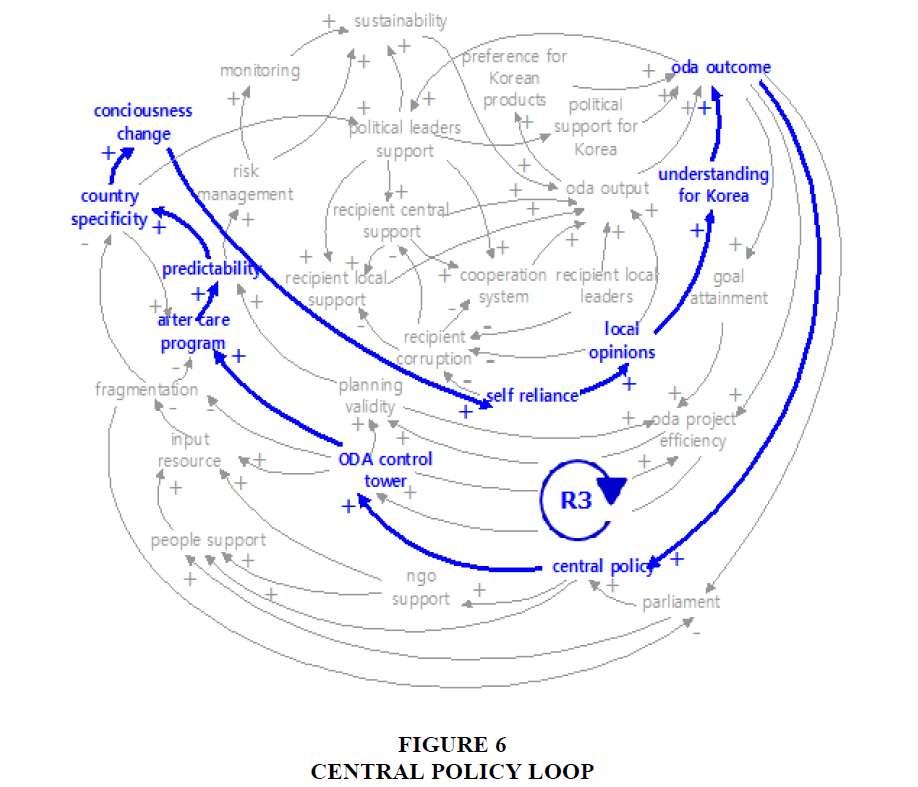 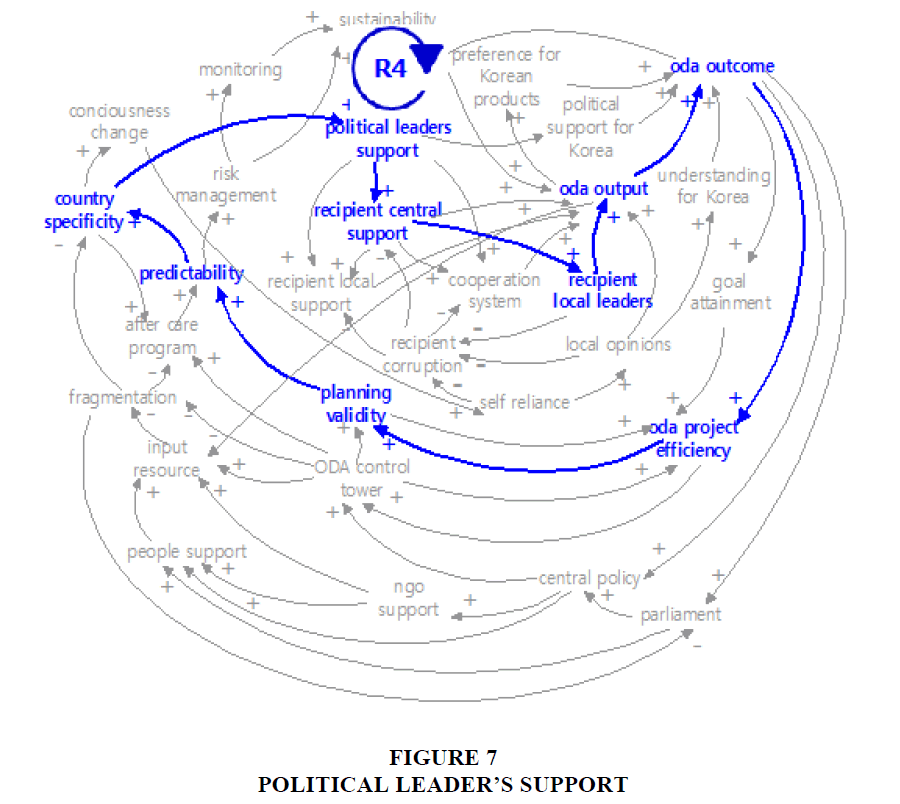 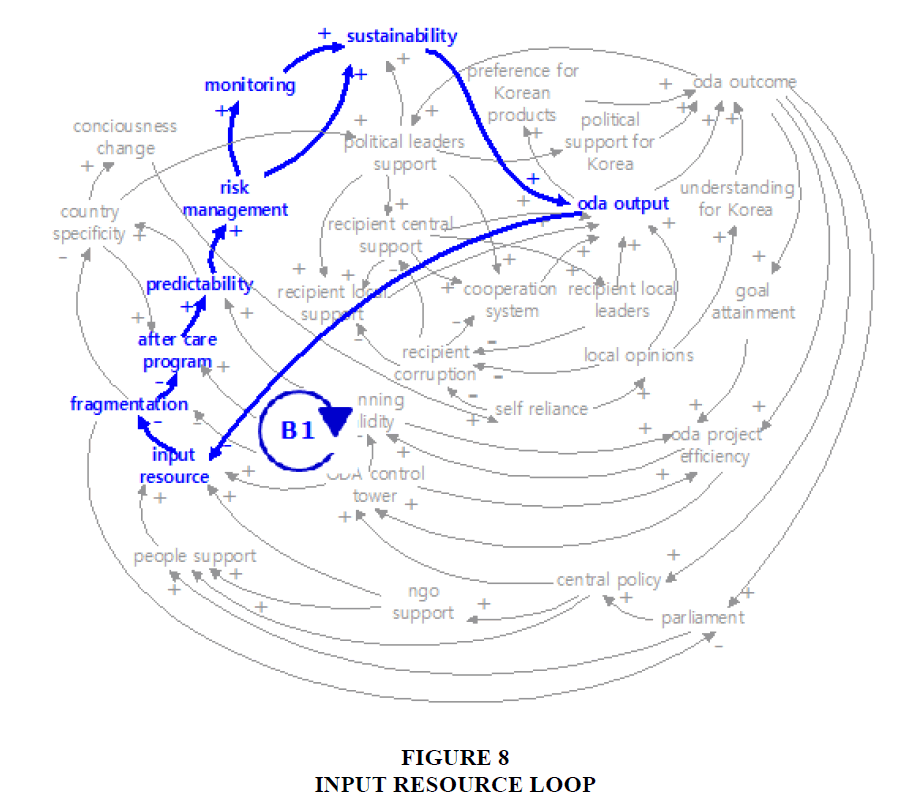 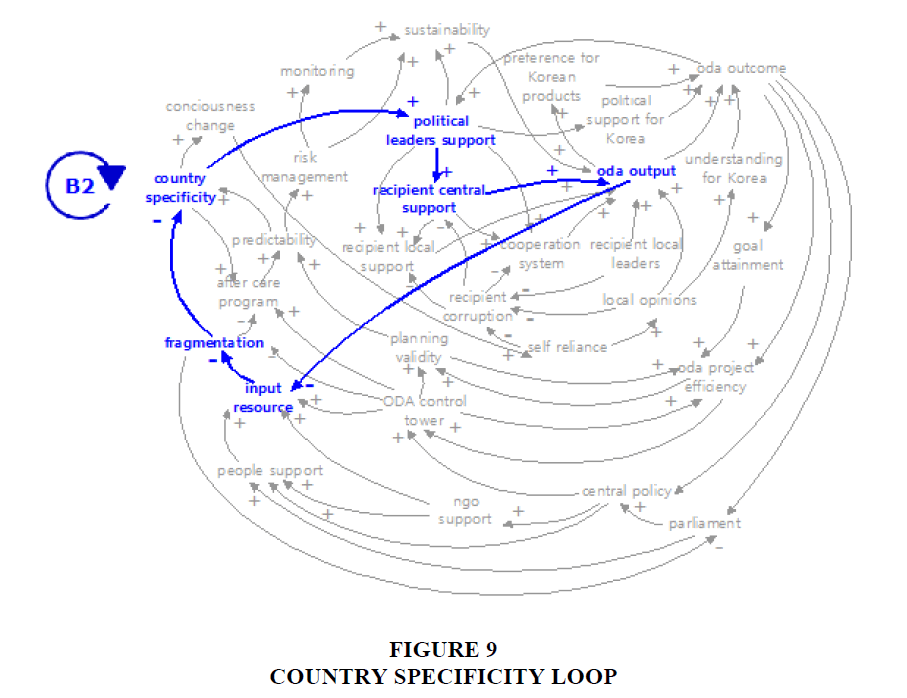 Policy makers and implementers involved in the ODA projects are expected to reinforce or balance the level of the variables relating to the ODA projects using diverse policy measures. It is expected that for this purpose they will properly make use of the policy measures that are available to them. In this connection, it is necessary for them to know in advance which variable is more sensitive in terms of its effect to the final dependent variable, ODA outcome, than any of the other variables. In this circumstance, sensitivity analysis is needed. Here, three theoretically important variables-control tower, monitoring capacity and parliament’s support-are employed in the sensitivity analysis in order to analyse which variable is most sensitive to the final dependent variable, ODA outcome. Here, the term “sensitive” means that the most sensitive specific variable will affect the ODA outcome more strongly than the other variables, even though it changes to a small extent. In other words, the variable which is “sensitive” should be regarded as the most important variable in the ODA project process. In conducting the sensitivity analysis, the Focus Group Interview method was also used, involving five experts on ODA and international relations studies. These experts were asked to discover the graph patterns explaining the causal relationships among the variables involved in the causal map, and also to estimate the coefficients between the variables concerned. 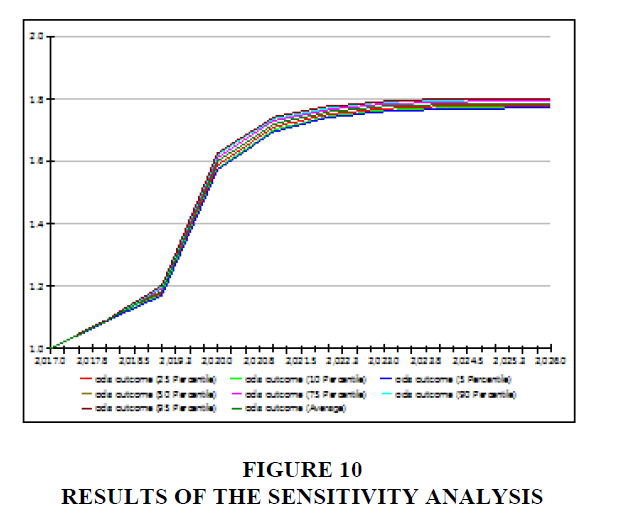 Figure 10:Results Of The Sensitivity Analysis. 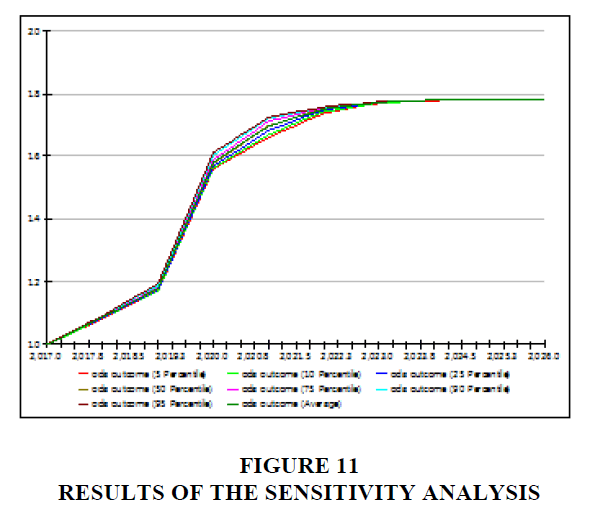 Figure 11:Results Of The Sensitivity Analysis . 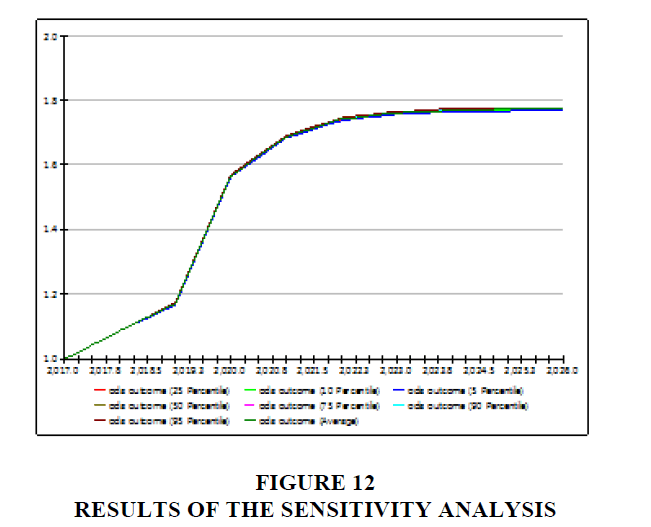 Figure 12:Results Of The Sensitivity Analysis.

This work was supported by the Ministry of Education of the Republic of Korea and the National Research Foundation of Korea (NRF-2016S1A5A2A03927173).

Sasaki, R. (2006). A review of the history and the current practice of aid evaluation. Journal of Multidisciplinary Evaluation, 3(5), 55-88.

World Bank (1998). Assessing aid: what works, what doesn’t, and why. Oxford University Press for the World Bank.