The Influence of Credibility and Voluntariness Toward technological use behaviour: Entrepreneurial potential Model approach

This research aims to analyze the use behavior of young entrepreneur in adopting internet-based information technology. The use behavior analyzed in this study is influenced by the credibility of internet-based information technology and voluntariness. Moreover, credibility is influenced by perceived desirability and performance expectation. Voluntariness is influenced by performance expectation. This research uses respondent survey using questionnaire. The respondent of this research is 267young entrepreneurs in Indonesia Micro Small Medium Enterprises (MSMEs) domiciled in Central Java and Yogyakarta. The data analysis tool used in this research is two step approaches to structural equation modeling. This research result shows that the entire hypothesis that is proposed is supported.

Industry 4.0 has made a big jump in the entrepreneurial world, especially the industry sector, by completely utilizes information technology and communication. Information technology is utilized not only in the production process, but also in the entire supply chain. Industry 4.0 grows a digital-based business model with a high efficiency and a better product quality. There are 4 interesting things that needs to be known and optimized by entrepreneurs related with Industry 4.0 (Bischoff, 2017), which is: Old machine plus rapid connectivity (maximizing machine by connecting it to the internet); Open standards and open economy (initiative and adaptation with new open industry standard and can be developed for data exchange in a related industry); automation (labor distribution, which is paving the way for new work opportunities); and connected technology (better quality for product and service, more efficient use of materials, and better security service standard). Technology 4.0 encourages automation, addictive manufacture, and internet industry.

The opportunity that offers by Industry 4.0 is new business model to bring goods and service to consumers, economy, and digital services and export (Naudé, 2017). This opportunity brings small scale MSMEs manufacture in Indonesia become more competitive and efficient, but the main threat is losing jobs by changing computer and internet-based industrialization model and manufacture restoring to developed countries. Quantum repair in communication and information technology infrastructures have helped spread even more progress for the smallest entrepreneurs, and it can fasten diffusion and innovation adoption rates. Entrepreneurs should make the best use of the Industry 4.0 era. Do not let businessmen and entrepreneurs in the country to be late in anticipating and adapting to the wave of industrial revolution 4.0. This change can be a challenge and new opportunity for entrepreneurs.

Venkatesh et al. (2003) did an empirical study and suggested Unified Theory of Acceptance and Use of Technology (UTAUT). UTAUT determines four main construct as the determination of use behavior, with four moderators. The construct in UTAUT includes performance expectancy, effort expectancy, social influence and facilitating conditions. Gender, age, experience and voluntariness of use are used as moderating variable in use behavior. The Entrepreneurial Potential Model (EPM) is one of the models that integrate TPB (Ajzen, 1991) and Entrepreneurial Event Model (EEM) (Shapero & Sokol, 1982). EPM is developed with three constructs, which is perceived desirability (attitude and social norms), perceived feasibility (selfefficacy) and credibility (Sugandini et al., 2018).This model explains that although individual feels that new innovation is desired, feasible and credible, they have not realize new innovation if it still lack of the trigger event (Coduras et al., 2008). Credibility becomes an important things in influenced behavior.

According to Choi (2015), credibility is defined as something that can be trusted and believed to be true. The credibility concept is based on quality and kindness attached to a dimension or object that in the management field can be formed as media, such as television, internet, communication or information resources (Rieh & Danielson, 2007). Gaziano & McGrath (1986) proposed a model to assess the credibility of a source, which is fair, imparcial, trusted, complete, factual, accurate and provide benefits for public. Source credibility becomes an important variable in affecting the behavioral changes of receiver (Petty & Cacioppo, 1981). The approach that recommended for the evaluation of online information usually includes five criteria, which is accuracy, authority, objectivity, currency and coverage or scope of the information and/or its source (Metzger, 2007). Accuracy refers to how far the website or another source is free from mistake and is the information can be verified offline. Authority can be measured by giving information about who write the information, what is the credential and author qualification, and does the site recommended by a trusted one. Objectivity identifies writer’s purposes to give information. Currency refers to the completeness or depth of the provided information that involves user activity, start from the simple visual check of the website for information verification and triangulation effort (Metzger & Flanagin, 2013; Rieh & Danielson, 2007).

H1: Perceived desirability has an influence toward credibility.

Performance Expectancy, Credibility and Use Behavior

Performance expectancy refers to how far a person feels that using a system can help him to gain advantage in work performance (Venkatesh et al., 2003). In this research, performance expectancy is defined as entrepreneur perception to use innovation related to IT (Information Technology) that can be useful for their job and help to gain advantage in their business. Metzger (2007) stated that information credibility is rare to verify the source of the information online. This finding is consistent with several credibility study from Hilligoss & Rieh (2008); Sundar (2008); Taraborelli (2008) which stated that when a person has a limited cognitive capacity, it will be rare for them to process all aspects of the message they received, and instead they only choose a few features that are important to be used and saved for decision making. Fogg (2003) showed that not all of the website elements can be seen or chosen by user, therefore not all elements will be included in their credibility evaluation. Onaolapo & Oyewole (2018), stated that performance expectancy is positively influenced the interest to use innovation related to IT, while the effect is different between ages, gender, tendency to act, and experience (Sugandini et al., 2018a). Performance expectancy also can predict information credibility (Moghavvemi et al., 2013) and it will influence the decision to use IT.

H2: Performance expectancy has an influence toward credibility.

H3: Credibility has an influence toward use behavior.

Performance Expectancy, Voluntariness and Use Behavior

According to UTAUT model (Venkatesh et al., 2003) performance expectancy is the main factor that influences behavior, which will also predict the actual use of technological system. Voluntariness does not moderate technology context according to UTAUT (Venkatesh et al., 2007:2011). However, in the meta-analysis study conducted in education and business context, the result showed that voluntariness moderates the effect of ease of use and usefulness on the intention to use (Wu & Lederer, 2009). This effect is more likely to happen in highly volunteer-driven environment rather than in low volunteer-driven environment (mandatory use).

H4: Performance expectancy has an influence toward voluntariness.

H5: Voluntariness has an influence toward use behavior.

The Analysis Result of Validity and Reliability

Characteristic Description of the Respondents

This respondent description includes respondent’s demography that consists of gender, age, level of education, length of work and position in the MSME. The respondent’s data of who participate in the research can be seen on Table 1.

The step that is conducted in two step approach to SEM is: Estimation toward measurement model and estimation toward structural model. The coefficient that is used to measure structural model comes from the calculation of composite value. The composite value is obtained from the factor score weight coefficient derived from calculation of confirmatory factor analysis multiplied by each question indicator score in the questionnaire. Figure 1 shows the research model after measurement model analysis. 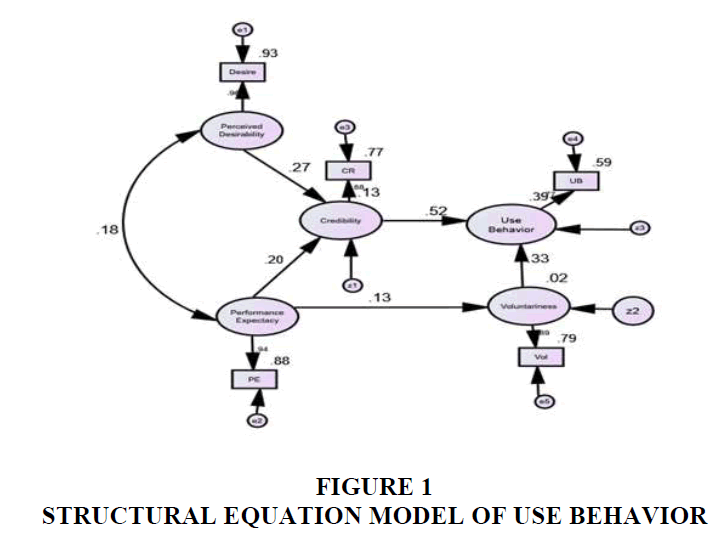 Table 2 explains the index of goodness of fit of the research model. The low chi-square value with level of significance that is less than 0.05 or 0.01 shows that, the actual matrix input is different with preducted matrix input (Hair et al., 1998). The chi-square value in this research is 33.9 and the significance level is 0.01. The high value ofgoodness of fitshows that the ability of the model to extract empirical data variance is high.

The next stage is hypothesis test by evaluating the direction and significance level of causality relationship between variables in the research model. This research tests the causality model by using one-sided test in the significance level (α) of 10%. This is in accordance with the statement from Hair et al. (1998) that the determination of critical value depends on the theoretical determination about proposed relationship. If using the CR value, the recommended CR value is ≥ 2. Based on the proposed research model, there are alternative relationships that need to be examined, which is the relationship of perceived desirability, performance expectancy, credibility, voluntariness and use behavior. The hypothesis test can be seen on Table 3.

This research proposes hypothesis related to the influence of perceived desireability and performance expectancy toward credibility. The research result shows that both of the influences are significantly positive. It shows that the more often entrepreneurs use IT and they have a high level of success in using IT for their business, it will further enhance the credibility of the IT innovation that is used. Credibility can be shown with information accuracy, the information that is provided is always accurate, there is only a little biased in the information, and the information is complete. The influence of perceived desirability toward credibility is 27%. The influence of performance expectancy toward credibility is 20%. This research result supports Coduras et al. (2008); Krueger & Brazeal (1994),who stated that the level of interest perceived by a person has an influence to certain behavior, which is caused by desired personal and social perception.Venkatesh et al. (2003)also stated that if entrepreneurs feel that the use of IT has an advantage for their job, then IT will be adopted.

Another hypothesis that is proposed in this research is there is influence of credibility towards use behavior. The research result shows that the influence of credibility toward use behavior is 52%. It shows that the more trusted an IT is, the higher the level of IT adoption. This research result supports the result from Metzger (2007); Hilligoss & Rieh (2008); Sundar (2008); Taraborelli, (2008), which stated that IT credibility is related to someone’s cognitive acceptance that has a limit, so some important and trusted features are used in the decision making. Fogg (2003); Onaolapo & Oyewole (2018) stated that credibility of information source is positively influence the interest to use IT innovation.

Choi, W. (2015). A new framework of web credibility assessment and an exploratory study of older adults’ information behavior on the web. A Dissertation, Florida State University College Of Communication and Information.

Coduras, A., Urbano, D., Rojas, A., & Martinez, S. (2008). The relationship between universities supports to entrepreneurship with entrepreneurial activity in Spain: A gem data based analysis. International Atlantic Economic Society, 14, 395-406.

Krueger, N. (1993). The impact of prior entrepreneurial exposure on perceptions of new venture feasibility and desirability. Entrepreneurship Theory and Practice Journal, 18(1), 5-21.

Metzger, M.J. (2007). Making sense of credibility on the web: Models for evaluating online information and recommendations for future research. Journal of the American Society for Information Science and Technology, 58(13), 2078-2091.