The purpose of this study is to identify basic and potential economic sectors in the three affected regions following the Earthquake, Tsunami, Liquefaction, including Palu, Sigi and Donggala, on 28 September 2018. This research is categorized as a quantitative study by applying several analyses, such as, descriptive, LQ, DLQ and shift-share. The findings showed that there was a shift in the value of LQ in both the basic and non-basic sectors, both before and after the earthquake, tsunami and liquefaction in Palu, Sigi and Donggala. In addition, the findings of the analysis also revealed a variety of possible baseline sectors in Palu, Sigi and Donggala. The sectors involved are the building sector; the firm services sector; and the health and social sector for the City of Palu, the financial and insurance services sector, the real estate sector and the educational services sector for Sigi, as well as the water supply sector and the government administration, defense and compulsory social security sector for Donggala. It is also recommended that local governments improve production and adopt strategies that will accelerate economic development in these industries.

Progress of a region can be calculated by the fast growth of the population and the equitable distribution of income per capita. The establishment of economic regions is a mechanism in which the Government of the Region and the citizens controlling certain resources that exist create patterns of cooperation between the Government of the Region and the private sector for the production of field work and can promote the growth of the economy of the area concerned (Feiock, 2007; Choe & Roberts, 2011). Progress in the growth of economic regions will bring stability to the region.

The wealth of the area varies from other regions (Lord & Tewdwr-Jones, 2018). One of the biggest disparities being the disparities in the structure of the economy. Market economics undertakings at the sector base have a role to play as a major driver of the development of the economy of the region, where any adjustment has a multiplier impact on the economy of the region. Development of sectors that use sources of energy labor and raw materials locally for export would result in a wealth of places and generate opportunities for job creation. That is why the grassroots operation field needs to be promoted across the policy and program implementation region.

The year 2018 is a landmark moment for the province of Central Sulawesi leading to the devastating Earthquake, tsunami and liquefaction that have threatened the region. Some of the areas affected are suffering serious damage, including the city of Palu, the district of Sigi and the district of Donggala, which is later named Pasigala (Palu, Sigi, Donggala) in the report. For this purpose, a study is required to recognize any pre-and post-disaster shifts in sectors of the economy that are sector-based, to recognize sectors of economic opportunity that can boost other sectors' operations in order to improve economic development, and to define the trend of change and sectoral development in the affected area.

Developing the economy is a phase of transition which is characterized by changes in the system, including changes in the economy of the runway operation, and in the context of the organization of the economic community dealing with the growth of the economy, the production or wealth of the society or the economy will rise. Besides, the morale of the people will rise as well as the growth of the economy, which leads to the ability to make a collection that is more comprehensive. Growth economics will have a human potential that is perfect for mastering the natural world and increase the degree of freedom of action. Economic growth must then be made for a better life for mankind (Choe & Roberts, 2011).

Changes in the composition of the economy will result in a move from industrial to non-agricultural operations, from manufacturing to services. Changes in the size of production units, as well as changes in the status of labor, since the definition of geographic development is very precise, backed by the theory of economic growth. An economy is assumed to be undergoing growth or progress if the level of economic activity is greater than that reached in the previous century. Kuznets (1955) describes the growth of the economy as an improvement in the length of time of the State's ability to supply more and more forms of products economy to the population, the capacity is expanded in line with the development of technology and structural and ideological changes are needed.

Economic occurrence, grouped on non-basic operation bases and behaviors. Only basic practices will promote regional economic development (Tarigan, 2004). According to (Lord & Tewdwr-Jones, 2015), Operations Base (Basic Operations) are activities of exporting products and services out of attached economy society or market goods and services to people from outside the boundaries of the economy concerned. People are interested within the boundaries of the market. Although the operation is not a foundation (non-basic operations) are the operations of delivering products that are required by people who are housed within the limits of the economy concerned by people.

Essential to the hypothesis that this is a sector dominated by the production of products and services to be sold in the region as well as outside the field involved; the sale of the field would raise income and provide new employment opportunities. Increased sales will not only boost pressures on the sector in question, it will also increase demand for the sector in question. Based on this principle, it is the leading sectors that need to be built in order to promote economic development in the region (Lord & Tewdwr-Jones, 2018; Tarigan, 2004).

The three components of the measure change share, that are: (1) National Growth Share to assess the change in the economic structure of an area that is influenced by a shift in the national economy; (2) Relative Shift or Industrial Mix Growth (IMG) has attempted to measure the degree to which the rate of growth of the Value Added Gross (NTB) sector in an area (regional district) is different; and, (3) Differential Change (Local Share) is the disparity in economic growth of a market with the same gross value added by the sector at national level (Randy et al., 2019)

Randy et al. (2019) argues that the object of the Shift Share study is to evaluate the output or productivity of the labor economy of the area (local/regional-district/province) by contrasting it with a broad base or area (regional-provincial or national). The approach applies to the contention basis that the economic development of a country or region influenced by three key components, that are (1) development in the national or regional provinces (national/regional development component); (2) sectoral growth (a growth part of the industrial mix or a proportional shift); and, (3) development of regional competition (regional share growth or competitive impact of a variable or change differential).

Natural disasters cause fatalities and damage to the impacted regions, including its harmful effect on economic growth (Strobl, 2012; Raschky, 2008; Botzen et al., 2019; Benson & Clay, 2004; Yamano et al., 2007; Hallegatte & Przyluski, 2010; Klomp, 2016). Improvements, in particular for the economies of the impacted countries, must then be increased. Awareness of basic and potential industries by LQ, DLQ and Change Sharing approaches of the affected area, followed by adequate care, would also help to boost the regional economy.

The data used to write this analysis was secondary data (time series). This type of time series data is the form of data gathered in a timely manner during a given time span. Annual data on PDRB per sector during the study period January 2014 to December 2019 are required. Data sets come from the National Bureau of Statistics (BPS). The approaches used are Location Quotient (LQ), Dynamic Location Quotient (D-LQ) and Shift Sharing Analysis. The Formula that applies to the LQ form, namely:

The principal of Dynamic Location Quotient (DLQ) has a similarity with LQ static, only to set the growth rate using the presumption that both the value-added sector and GDP will have an average growth rate of their own for a given period of time.

In the Move Share Analysis Approach, a particular sector in the field of such component transition can be formulated as follows: 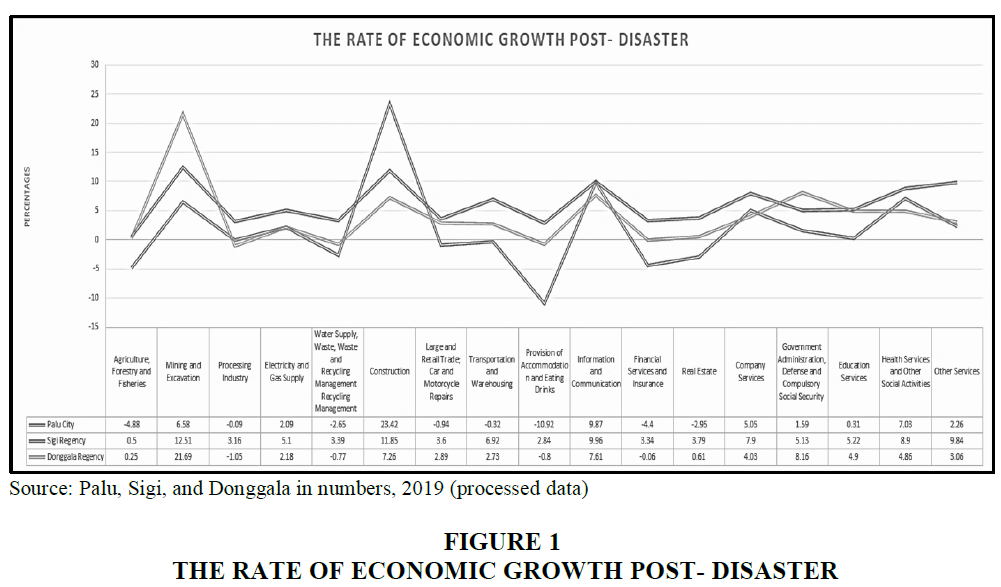 Observing the growth rate of the post-disaster economy of Pasigala at the top of Palu, the growth of the economy, which suffered a decline of even less than 0 per cent, indicates that the food and beverage supply market, which decreased dramatically by -10,92 % compared to 2017, was 7.47 %. However, several industries experienced a rise in the year 2017 are the manufacturing industry, which experienced an increase of 23.42% in the year 2019, of which the year before the growth rate of the economic sectors amounted to 2.49%.

Results have shown that there are many main industries that can drive economic development. Table 1 is the estimate of the average LQ and DLQ for Palu, Sigi and Donggala

Based on LQ, DLQ values estimation, a set of sectors with the best value are extracted using these three methods. There are three industries that have a significant effect on the economy in Palu following the earthquake, liquefaction and tsunami. These industries are the manufacturing industry; the corporate services sector; and the human services and social programs sector.

Furthermore, Table 2 of the results of LQ, DLQ and shift share indicated that sectors had a potential to develop in Sigi, namely the financial services and insurance sectors; the real estate sector and education service sector. Two sectors have had an effect on economic development in Donggala, for example, procurement water, government administration, protection and social responsibility welfare. In addition, the Donggala government also needs to pay attention to the strategy of economic areas which have an impact on a variety of sectors of the base or market.

Based on the findings of the study and discussion set out in the previous clarification, some conclusions can be drawn as follows. The earthquake, tsunami and liquefaction triggered a shift in the LQ values in 2018 compared to the previous year, both decreased and increased in several sectors in Palu, Sigi and Donggala. This study shows several potential sectors that need to be developed by each regency or city.

On the basis of the findings of the discussion and conclusions, there are some suggestions. First, the government needs to pay attention to several base sectors which had a decrease of LQ values after the devastated natural disasters in 2018 in Palu, Sigi and Donggala. These sectors have been involved in the manufacture of goods and services to distribute both in the region and abroad and provide job opportunities for local people. Second, this research is generating local markets that have the potential and it can stimulate the development of Palu, Sigi and Donggala economies. Since it is one of the attempts to strengthen the conditions of the urban areas impacted by the tragedy, the Government of the Regions proposed that it is critical to maximize production and introduce measures that will stimulate the development of the country's economic sector.