A Review on Intention Models for Predicting Entrepreneurial Behavior

Entrepreneurship development is viewed as the success mantra in the upliftment of social and economic backwardness. The development of the entrepreneurial mindset is assumed that an outcome of proper settings of the different factors e.g. social, psychological, economical, environment and personal. So, the researchers constantly in the pursuit of designing the best fit model which can illustrate the entrepreneurial behavior. In this paper we have reviewed the three widely used such models which are (Shaper & Sokol, 1982; Bird, 1988; Ajzen, 1991).The paper aims to discuss the application of these models in different settings and not indicate that which the best is. The paper is useful for the further researches on the entrepreneurial behavior & intention escalation. In will be also useful in designing educational and training programmes for entrepreneurial development.

Throughout the world entrepreneurship is gaining recognition as the growth engine of economic, social, employment and innovation (Bakotic & Kruzic, 2010).The academicians and researchers are interested in recurring development of the model that could describe and the intentions which in turn translated to entrepreneurial behavior. Various intention models are proposed by researchers. Out of these models three models are significant which are widely used and accepted to describe entrepreneurial behavior:

These models are targeted to identify the events which leading towards the entrepreneurship behavior and attitude (Ajzen, 1991). Further according to the (Bandura, 1986) these models include the theories of social, psychological and self-efficacy to explain the entrepreneurial event. Peterman et al. (2003) stated that intentional models are synchronization of influence gathered by environmental, social, volitional, exogenous and supportive factors. These entire factors combined to form an entrepreneurial behavior in the person. The models are used as predictive as well as regressive indicator of the person’s behavior towards the entrepreneurship. Authors also argued that these models can be utilized as career choice prediction also that we will see in coming sections.

In the upcoming sections of this paper we will discuss about the objective and scope, brief introduction of the intentional models and their applicability.

This paper will critically examine the applicability of intention models by which entrepreneurial behavior is predicted. The analysis will be based on the previous researches by the various authors. The analysis over the applicability will provide a basic framework on which researchers will able to identify the use of the specific model according to the different situations and cases. This will be helpful in creation of educational and training programs on entrepreneurship education, sketching of the holistic factors (social, economic, environmental and personal) for a person who tends to make him/her successful entrepreneur. Similarly the policy makers will be able to identify that which model can be appropriately used to inculcating the entrepreneurial mind-set in different settings.

There is a constant attempt by the academicians and the researchers to model out a best fit framework which can illustrate the entrepreneurial behavior in a person. Towards this, three models which are mentioned in the introduction became widely popular. Let us have the brief introduction of these models then we will discuss about application issues in the next section.

One of the pioneer models in this area is presented by the Shapero & Sokol (1982) in Figure 1. In this model, entrepreneurship has been thought as an event which is a resultant of displacement. This displacement is further augmented by the perceptions of desirability and feasibility. According to the authors the event of entrepreneurship is an outcome of a combination of social variables (these variables includes different ethnic groups) and the environment (social and cultural) in which the subject is discussed. According to the authors “The entrepreneurial event is denoted by initiative-taking, consolidation of resources, management, relative autonomy and risk-taking”. In this model the authors intended to sum up all possible factors e.g. situational, social and individual which give rise up to the entrepreneurial event. Here the displacement is observed as the paradigm shift or an essential thrust in the mind of a person which leads his/her intention towards the enterprise development. When this displacement is achieved in the subject mind then his/her desirability and analysis of feasibility leads to formation of enterprise. According to the (Fayolle, 2006; Krueger, 1993) presented an important evaluation on this model. He argued that although this model is very contextual and address the entrepreneurial desirableness of the person however it is more suitable to the new enterprise creation. The holistic behavior of the entrepreneurship as a career may not be explained completely.

Another important model is proposed by Bird (1988). According to her “Entrepreneurial behavior as defined by opportunistic, value-driven, value-adding, creative activity where ideas take the form of organizational birth, growth or transformation." Bird (1989) research finding confirms that there is no significant difference the motivational level among the gender and their demographic position in the society e.g. majority and minority population. The less number of females and minorities in the entrepreneur's population is due to environmental pressures. Her model is further modified by Boyd & Vozikis (1994). According to them Bird (1988) model suggest that intention development is depending upon two factors rational/analytic thinking and intuitive holistic thinking. According to her both type of thinking are the resultant of contextual (political, social and economic contexts) and personal factors (personal history, personality and abilities). Figure 2 is the illustration of the Bird (1988) “context of entrepreneurial intentionality”. 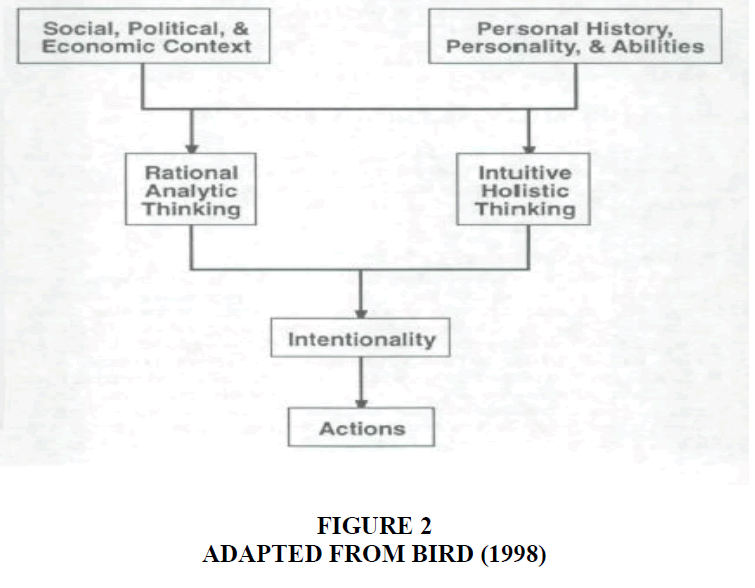 Boyd & Vozikis (1994) provided a refinement in the Bird (1988) model. They integrated the concept of self-efficacy in this model. The term self-efficacy was suggested by Bandura (1977) social learning theory and it indicated the person’s own belief for completion of any task by him/her. (Ryan, 1970) argued that perception about self-ability and tendencies is decisive for development of person’s intentions about the task performed by him/her. In the similar way the self-efficacy plays a pivotal role in affecting the personal belief in attainment of success or failure in the task/assignment/project undertaken by him/her. According to (Bandura, 1982; Gist, 1987) the self-efficacy is not remained constant and it increase by the personal experience on various factors e.g. social, lingual, cognitive, physical etc. Boyd & Vozikis (1994) indicated the ways for the development of self-efficacy given by (Bandura, 1982; Wood & Bandura, 1989):

4. Judgment of their own physiological states

Figure 3 depicts the revised Bird (1988) model of “context of entrepreneurial intentionality” by Boyd & Vozikis (1994). The self-efficacy is further strengthening by the inculcation of learning and skills. These leanings lead to scaling up of the aspirations and actions by the individuals (Herron & Sapienza, 1992). 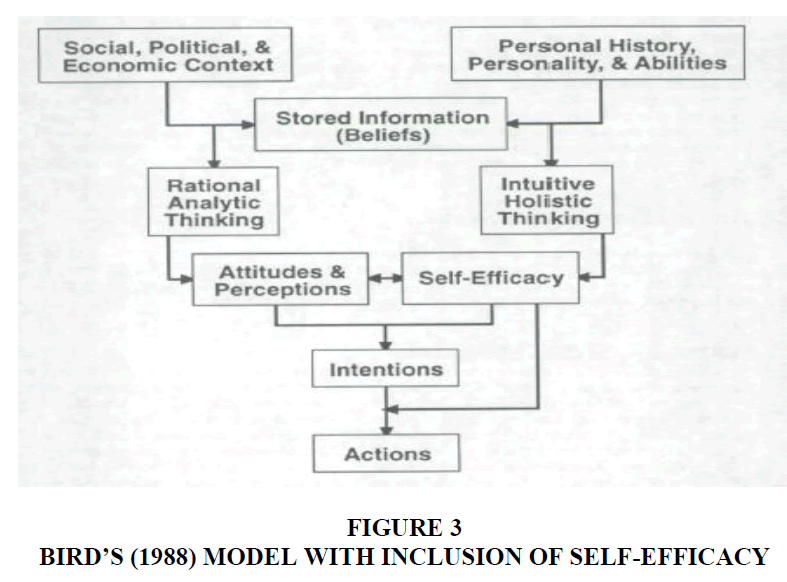 One of the most important model for predicting the intention is theory of planned behavior (TBP) provided by Ajzen (1991) which is basically the extension of theory of reasoned action presented by Ajzen & Fishbein (1980). Kruger & Crasrud (1993) applied this model for determining the entrepreneurship behavior. According to various authors e.g. (Krueger et al., 2000; Fayolle et al., 2006; Wu & Wu, 2008; Gird & Bagraim, 2008; Sondari, 2013) the TBP model is useful to explain the intentions of the person which apparently leads to his/her entrepreneurial behavior. This model proposed that the entrepreneurial behavior is the outcome of a deliberate intention of an individual. Many authors e.g. (Shapero & Sokol, 1982; Krueger & Carsrud, 1993; Autio et al., 1997; Tkachev & Kolvereid, 1999; Fayolle et al., 2006) argued that entrepreneurship behavior is a planned hence it is an intentional behavior rather than it is affected by the attitude, belief system or any other variable (psychological and sociological)of a person per say.

According to Ajzen & Fishbein (1980) both attitudes and beliefs are responsible for the intention development. As per (Byabashaija, 2010; Ajzen, 1991) said that three variables which leads to the formation of intention. These are:

1. Attitude towards a given behavior

3. Perception of control over the behavior

Engle (2010) confirmed postulates the direct proportional relationship of these variables with individual’s intention. Figure 3 provides the diagrammatic representation of TBP given by Kruger & Crasrud (1993) based on the Ajzen (1991) model. 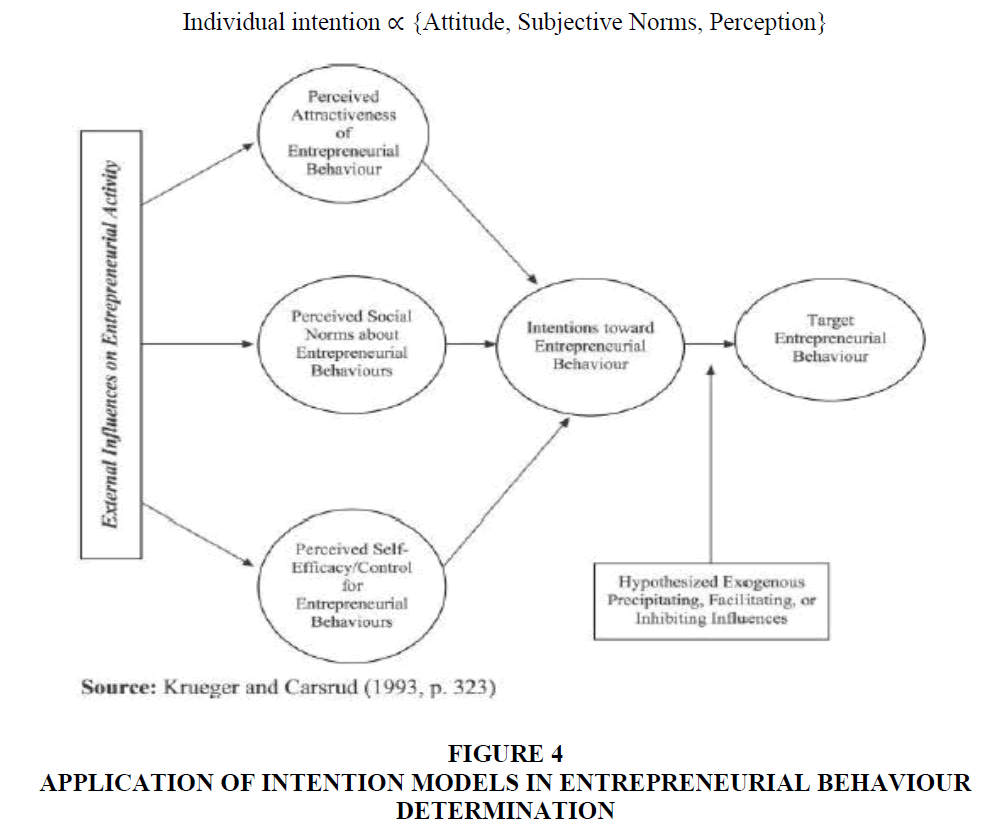 1. What brought about the life-changing event?

2. Why this particular event?

That’s may be a possible theory based on which Krueger & Brazeal (1994) have successfully able to gestate “enterprise potential” for young people which are at the educational institutions with the help of Shapero’s (1984) model of displacement.

Moving towards the next model which is Bird’s (1988) model of “context of entrepreneurial intentionality” which was modified by Boyd & Vozikis (1994) with the addition of concept of self-efficacy. Unlike Shaper & Sokol (1982) model here entrepreneurial intention is viewed as the conscious, analytical and intuitive thinking. Fayolle et al. (2006) this model has raised important criticism of this model which are as follows:

1. The objective of this model is to explain the entrepreneurial ideas and its implementation. Authors argued that it is very much possible in absence of ideas the intention of entrepreneurship can be developed.

2. Empirical validation of ideas implementation by this model is still awaited.

This model is highly useful in identification of contextual (political, social and economic contexts) and personal factors (personal history, personality and abilities) and their correlation with the entrepreneurial intention development. Further these contextual and personal factors leads to idea/thinking development hence it (model) can provide an useful inputs to the policy makers to create a conducive ecosystem which can regressively helpful in generation in entrepreneurial idea development.

The theory of planned behavior (TBP) is one of the prominent models for explanation of entrepreneurial behavior. According to various authors (Autio et al., 1997; Linan, 2008; Gary & Sharp, 2011), this model is also used for the explanation of individual's career intentions. Fayolle et al. (2006) argued that this model is one of the robust and empirically tested models for explaining the entrepreneurial behavior. This model assumes that behavior development is dependent on attitude, subjective norms and perception (behavioral control) of the individual.

According to the Fayolle et al. (2006), TBP model is favorable for measuring the impacts of the antecedents of entrepreneurial behavior. The book titled “Antecedents of Entrepreneurial Behavior-Opportunity Recognition” by Propstmeier (2011). The author proposed the statements for measuring the variables i.e., attitude, behavioral control and social norms as shown in Figure 5. 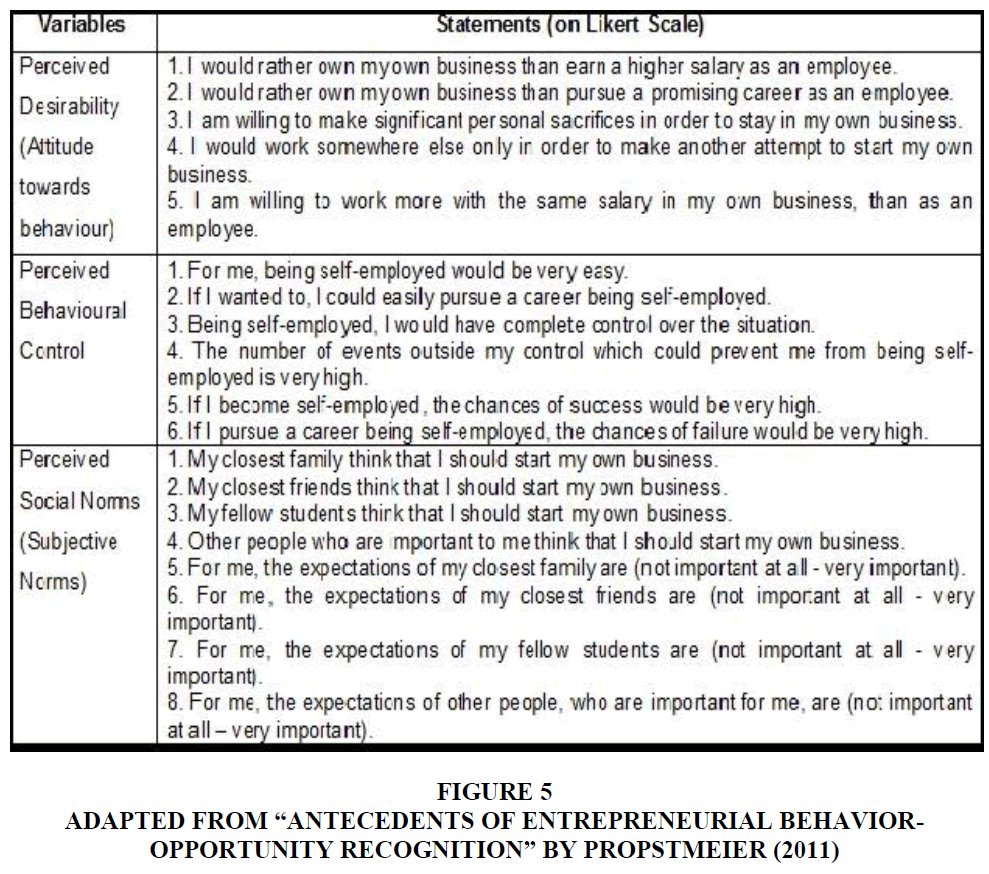 Figure 5:Adapted From ?Antecedents Of Entrepreneurial Behavior-Opportunity Recognition? By Propstmeier (2011).

The identified factors in this model, i.e., attitude, subjective norms and perception (behavioral control) is the good predictor of future entrepreneurial behaviour by Fayolle et al. (2006). According to this model the entrepreneurial behavior is the outcome of the intention which is further dependent upon abovementioned three variables hence it can be used for regressive approach for the sensitivity analysis on these variables. For example we can instrument this model to different types of the entrepreneurs (different on the basis of demography, process and other situational factors) to develop understanding about that what should be best possible framework (based on these variables) for entrepreneurial development; so that policy makers can develop the same.

Researchers like Fayolle et al. (2006) indicated that these models are also can be used for the purpose of education & training and also in course development on entrepreneurial intentions among the young graduates and postgraduates.

According to Fayolle et al. (2006) different authors these intention models depends upon situational, environment, educational and professional factors so that models can be seen as indicator of aforementioned variable in the person’s choice for entrepreneurship and even the different choices of the careers. Future research avenues in this area could be unification of these models and its empirical validation.

Albert, B. & Wood, R. (1989). Effect of perceived controllability and performance standards on self-regulation of complex decision making. Journal of Personality and Social Psychology, 56(5), 805.

Nancy, G.B. & Vozikis, S.G. (1994). The influence of self-efficacy on the development of entrepreneurial intentions and actions. Entrepreneurship Theory and Practice, 18, 63-63.

Warren, B. & Katono, I. (2011). The impact of college entrepreneurial education on entrepreneurial attitudes and intention to start a business in Uganda. Journal of Developmental Entrepreneurship, 16(1), 127-144.

Norris, K. (1993). The impact of prior entrepreneurial exposure on perceptions of new venture feasibility and desirability. Entrepreneurship: Theory and Practice, 18(1), 5-22.