Agricultural sector development is expected to improve the welfare of farmers. Various government policies have been implemented to overcome the problem of poverty and food unavailability. Farmer households along with their problems are complex and interesting to be studied. One of the interesting problems of farmer households to be studied is the effort made by farmers to meet food needs in realizing household food security. The behaviors of farmers as household heads in meeting their food needs can be differentiated into two, namely food producers and consumers. This research would analyze more deeply the effect of poor farmers’ behaviors (Ihsan or good attitudes) in Bangkalan to meet their family food needs, given that the majority of people in Bangkalan Regency are very religious.
Many studies have found that a greater vested interest leads to the stronger impact of an attitude towards behaviors (Baron & Byrne, 2004). Based on the above description, this research aimed to analyze the effect of farmers’ characteristics, ihsan attitudes, economic conditions, and socio-cultural environment support on farmer behaviors to meet food needs in realizing household food security, with the government role as a moderator of the relationship between farmer behaviors and their household food security.

Previous Studies and Authenticity of Research

The authenticity of this research was based on tracking results of the latest similar studies and the position of the current research. Nnadi & Nnadi (2009) explained that the factors influencing farmer behaviors are socio-economic characteristics including age, education, number of family members, land area, and their income as a determinant of food security. Maleha (2008) argued that household behavior or decisions reflect household food security in relation to farming production, household income, food expenditure, and household food availability. According to Silva et al. (2016), to overcome the controversy of food security is to focus on the behavior of meeting food needs with nutritional quality dimensions and classifying healthy and unhealthy food products, in addition to calculating the food calorie value.

Before discussing the conceptual framework of this research, we initially outlined the framework of the thinking process as presented in the following Figure 1. 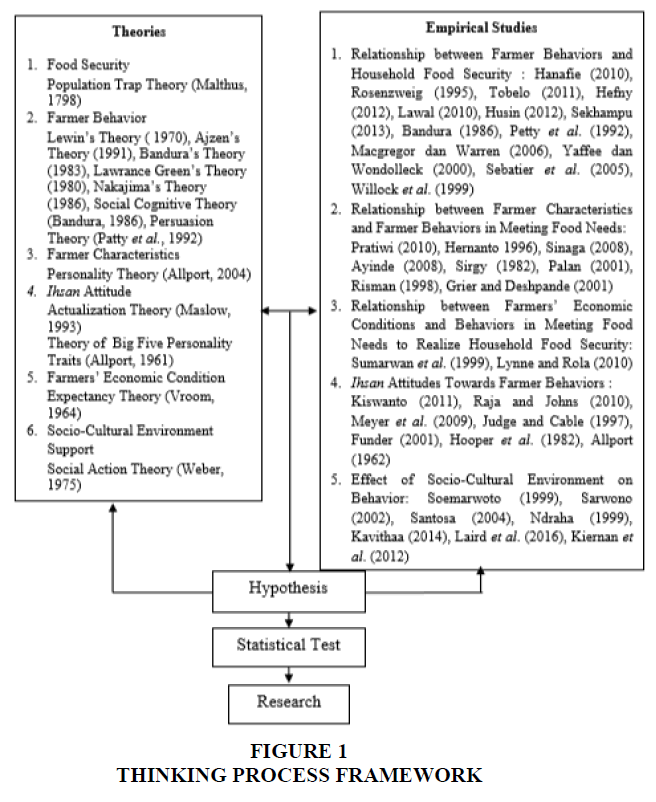 Based on the theoretical basis and framework, the hypotheses of this research are formulated as follows:

For relatively young farmers (in productive age), efforts to work hard were still very convincing. Even outside their main activities as farmers, it was still possible for them to work in other fields, such as being builders, unskilled laborers/ workers or even working outside the city to seek additional income (Figure 2). 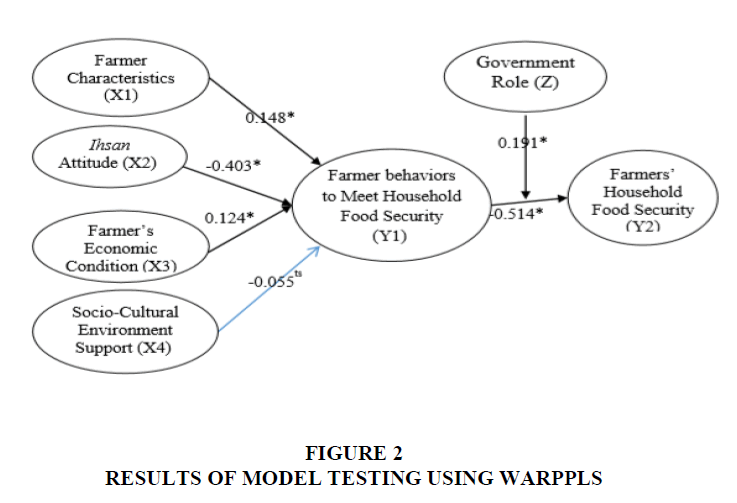 Farmer characteristics reflect specific personal behavior, self-concept, values, knowledge or expertise brought by someone who has a superior performance in farming (Manyamsari & Mujiburrahmad, 2014). Farmer characteristics are considerably determining behavior patterns and actions to find alternatives in meeting food needs, leading to food diversification. The results of this research support Lynne & Rola’s (2010) study focusing on analyzing the effect of farmers’ economic level on their behavior related to land conservation in their area. Moreover, this research also strengthens several previous studies on the relationship between these two variables but in different or more general contexts, including Sirgy (1982); Palan (2001); Risman (1998); Grier & Deshpande (2001). Characteristics such as age, length of work, education level, gender and several others are identified as being able to influence individual behavior.

Knowing the characteristics of the farmers in Bangkalan Regency, Madura, which in average belonged to the advanced age (nonproductive age) and had low education levels (only up to the elementary school education level or even not attending school), the responsible parties should be able to make policies that can encourage the improvement of farmers’ quality.

Ihsan attitudes in this research are a novelty that the researchers want to highlight. This is because ihsan attitudes have most likely never been used in the realm of human resources in the agricultural sector. The government roles are one of the variables identified as crucial in this research. Knowing that the government roles are able to give a positive influence on the relationship between farmer behaviors to meet food needs and household food security, the government should be able to optimize the programs run to support farmers, especially in Madura which geographically has unfavorable natural conditions. The three indicators of the government assistance used in this research, namely subsidized rice provision, social assistance, and technical assistance were identified to have a fairly low value if compared to the indicators of the other variables. This indicates that the government roles in terms of subsidized rice provision, social assistance, and technical assistance are felt to be lacking. This certainly becomes a big concern for the government as the responsible party for realizing its people's welfare. Although rice subsidy is a good program, it is still not able to positively affect farmers' productivity. Hence, the researchers recommend that the government should only concern to maximize social and technical assistance. Social assistance such as free healthcare and educational scholarships for poor families of farmers in Madura is considered to have more impact on improving human resources in Madura.