Annuity Murabaha after Being Regulated in Indonesia, Is It Like Riba (USURY)?

This paper aims to analyze the characteristics of Muslim scholars' preferences on annuity murabaha in Indonesia. Annuity income recognition of Murabaha is permissible from 2013 then it would be regulated in 2019. Annuity recognition has been practiced by conventional banks which are based on the interest rate. The research method applied is based on quantitative and qualitative methods using a survey on member of the public hearing group on revised murabaha accounting standard and discussion during the public hearing. Forty respondents participated in the survey. Data would be analyzed using factor analysis. Results show that most respondents do not agree with annuity recognition in murabaha, but no solution for this issue. No significant affecting factors on margin murabaha similar to riba, this may be caused some people have resigned to this issue. However, the higher the education would state that margin murabaha is similar to interest rate. This is similar to not use murabaha respondents. This is the first paper which responding the revision of annuity income recognition of murabaha accounting standard in Indonesia with specific requirements.

Murabaha has becoming a popular financing in Islamic banks in Indonesia since the first Islamic bank established in 1991. Murabaha is flexible, safe and low risk for Islamic banks. Murabaha is only used for selling transaction purpose. So it need some requirements to be fulfilled for this financing scheme. Not all transactions can be covered by murabaha, in fact many unsuitable transactions applied this scheme. Some Muslim scholars do not supports murabaha as proper Islamic finance especially for installment basis. The critic is on different margin along additional time period. The longer the period the bigger margin income. Rosly (1990) criticized this phenomenon on murabaha transaction in Malaysia which also may be applied to other countries like Indonesia. However, the increasing period my realate to risk which Islamic banks has to cover. While this may be similar to interest rate based lending. The longer the period, the bigger income margin bank would get. The difference is Islamic bank only charge fixed profit margin while conventional may refer to the volatility of interest rate.

This objective of the paper is to analyze the characteristics of Muslim scholars preferences on annuity murabaha in Indonesia. This would enrich the analysis how scholars respond the issue. This only occurs in Indonesia which concerned with customers responses on annuity profit recognition. This is the research gap of the paper which may only occur in Indonesia. In addition, respondents of the questionnaire are scholars who concerns with the revision of annuity income recognition of murabaha accounting standard.

The paper starts with the introduction which show how this issue occurred. Then literature review which discuss related theory on murabahah recognition income. Research method discusses identifying factors for preferences. Analysis would map preference factors on annuity murabaha in Indonesia. Lastly, it is the conclusion.

Murabahah is a popular Islamic financing scheme in Islamic banks including in Indonesia. This may be caused by simple, fixed return and easy from customers perspective. However, many critics occurred on this scheme such as possession of good for selling, increasing profit along period, and income recognition. In Islamic perspective, the issue of possession becomes an issue as seller should have items for sale. While, profit is borne to the risk (Al-Fijawi & Yunus, 2019). Difference in murabaha accounting caused by different fiqh interpreting pricing which may be an issue (Al-Fasfus, 2018).

Income recognition in murabaha became an issue when annuity recognition was legalized. Annuity method has been regulated in Islamic bank regulation in 2012 (PBI No. 14/14/PBI/2012 on transparency and publication of Islamic bank report and SEBI No. 15/26/DPbs/2013 on Implementation on Guideline of Islamic Bank Accounting Standard). However, the accounting standard refers to conventional standards. The recognition also has been approved by Islamic scholars, issue of transparency is concerned with (Faisal, 2015). In fact, FAS 102 on murabaha accounting has not accommodated that practiced. In Indonesia, annuity recognition may be applied since 2007.

In other country like USA, annuity profit recognition is not a problem by Baktiar et al., (2017) as it may not come in appearance. The interesting issues is on the legality of profit in the Islamic perspective which differs from interest rate (Abdullah, 2016). Yanikkaya et al., (2018) found that non-murabaha financing which based on risk may give better performance to Islamic banks. From this, we can find that murabaha has limitation to the contribution of Islamic bank income. In case of annuity method in murabaha, tt can cause the level of liquidity of Islamic banks but it affects lower profitability of Islamic banks especially in the long run (Kamaliyah, 2018). In addition, margin murabaha profit is affected by macroeconomic factors such as LIBOR rate (Chelhi et al., 2018). This why murabaha may charge higher profit to compensate the risk may occur. Khan (2010) also discusseses this issue but not so detailed.

Financial Accounting Standard (FAS) No. 102 on murabaha accounting first issuance was in 2007. The standard covered for all Islamic financial institutions. Then in 2013, the standard was revised to accommodate annuity income recognition. Some interesting topics in FAS No. 102 are:

2. Seller must own the product

3. Seller must inform the Cost of Goods Sold (COGS)

4. Late installment payment can be fined Then in 2019, the standard is proposed to be revised as annuity method should be regulation with some restrictions. This is interesting issue as annuity method has become debatable issue after its issuance.

Data analysis applies discriminant analysis to map related factors to annuity income recognition preferences. Statements from questionnaire would be grouped using this method. Then we would get main group factors which affect annuity recognition murabaha income preference. Crosstab analysis would be added to enrich the analysis.

Before the revised accounting standard issued, there were a public hearing to inform the exposure draft and the committee, the Indonesian Institute of Accountant receive any comments of the exposure draft. Some issues raised on this case are:

4. Similar issue would occur if buyer take over their financing to other financial institution. They would have different income with flat method if they are not informed by the Islamic bank. This may be unjust for buyers as they do not know the portion of income recognition for each installment.

Statistic descriptive would give detail information about respondent’s preferences on statement in the questionnaire Table 1. The highest is on seller must own the product before they can sell it (4.48). Then, it is followed by seller must inform the profit margin on the product (4.3). The next is rebate can be given if the buyer pay the installment earlier (4.28). Surprisingly, the lowest mean is on margin on installment is similar to interest rate (2.55). The higher mean is on installment margin can refer to interest rate basis (2.75). However, the average mean is still above 2.5 which has ranged from 1-5. While, the main issue on the permissibility of installment income recognition can be used annuity basis has average mean of 3.63. This shows that actually respondents may be in doubt whether annuity income recognition is permisibble or otherwise. But if the parameter is based on the rank of average mean, it has the 11th position among 17 statements. From this, if it is compared to others the statement has lower agreement on the aanuity income recognition. Proportional income recognition has higher rank than annuity income recognition.

Next analysis is on factor analysis for affected variables to similarity issue. Table 9 shows that the related variables can be used as it is significant and above 0.5 for the test (0.7). This also occurs with anti image matrices correlation which all above 0.5, this means that all variables are qualified for factor analysis. Six variables omitted as the score is below 0.5 (see appendix 2). They are owned, cost, collateral, disclose, prop and propbet. These variables can not be interpreted for further analysis.

Next analysis is on communalities requirement. The biggest percentage would give the clearer explanation of variable. The highest percentage is marjin and annuity (see Table 10).

In Table 11, we can see that from ten variables can be grouped into three factors as the four component has only 0.929 which is below 1.

To categorize which variables can be grouped into component 1, 2, and 3, we can see Table 12 and 13. Table 14 shows that all components are above 0.5, so it can be concluded that it is right and have high correlation. 3 dimension can be seen in figure 1. 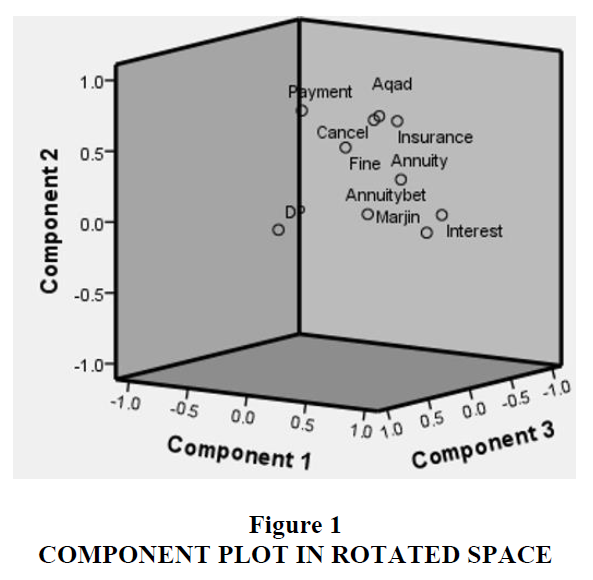 From Table 15, the correlation commitement variable is positive to similar component, others is negative, but all are insignificant. The bigger response for commitment variable would increase the similarity response of annuity record treatment is similar to usury (riba). The result is also similar to regression method (see Table 16, 17, 18). This is similar to Al-Fasfus (2018) who states that different fiqh interpreting also cause this.

For loading factor analysis, three main variable can be grouped (a) annuity permisiblity, preference of annuity method, bigger margin at the early payment, interest reference (b) issue of cancel, fine for late payment, fine information, discount on early settlement and insurance (c) down payment. All variables are insignificant, only first variable is posisitve, others are negarive correlation to the similar variable. Further research can be done with respondents who use murabaha contract so the impact of annuity method can be elaborate in detail. In addition, other issues such as take over or early settlement could be interesting topic.