The common problems facing the low and middle-income countries are the high rate of unemployment and poverty. In these countries, the high population growth rate drives the availability of jobs decrease. Unemployment triggers poverty rate. Governments in the developing countries believe entrepreneurship is a solution to overcome unemployment and poverty. The governments then impose their education policy to equip students with entrepreneurship education. Entrepreneurship courses are taught to students with the aim of providing the skills and knowledge to start a business. Thus, students are expected to choose entrepreneur as their career choice in the future.

Based on the Global Entrepreneurship Monitor (2016), the ranking position of Indonesian entrepreneurial intention was 25th (23.2%) of total 65 Asian and Oceania countries. The number of entrepreneurial intention describes the percentage of population aged 18-64 years who are interested to open a business within the next 3 years. This organisation also reported that the public perception of entrepreneurship as a good career choice was ranked 20th (69%) of the 65 Asian & Oceania countries surveyed.

This study aims to measure the impact of social norm, locus of control, entrepreneurship education on secondary students’ entrepreneurial motivation. This empirical study is expected to fruitful and enrich the repertoire of researches in the field of entrepreneurship.

The social norms depend on the perception of normative beliefs of important people, such as family, friends and significant others, valued by the motivation of person (Khalili et al., 2015). Social norms have been empirically researched in the entrepreneurship literature. Some of the researchers in social differences in entrepreneurship (McGrath & MacMillan, 1992) showed that entrepreneurs with different countries are more similar than those non-entrepreneurs from the same country. Linan, Rodríguez-Cohard & Rueda-Cantuche (2005) in their study also found the effect of social norms on entrepreneurial motivation.

The general education (and experience) of an entrepreneur can provide knowledge, skills and problem-solving abilities that are transferable to many different situations. Hisrich, Peters & Shepherd (2010) mentioned that education is important in the upbringing of the entrepreneur. Indeed, it has been shown by the previous researchers (Van der Sluis, Van Praag & Vijverberg, 2008) that the effect of education as measured in years of schooling on entrepreneur performance was positive (Bili?, Prka & Vidovi?, 2011).

The authors posit the following hypotheses and develop the research model (Figure 1); 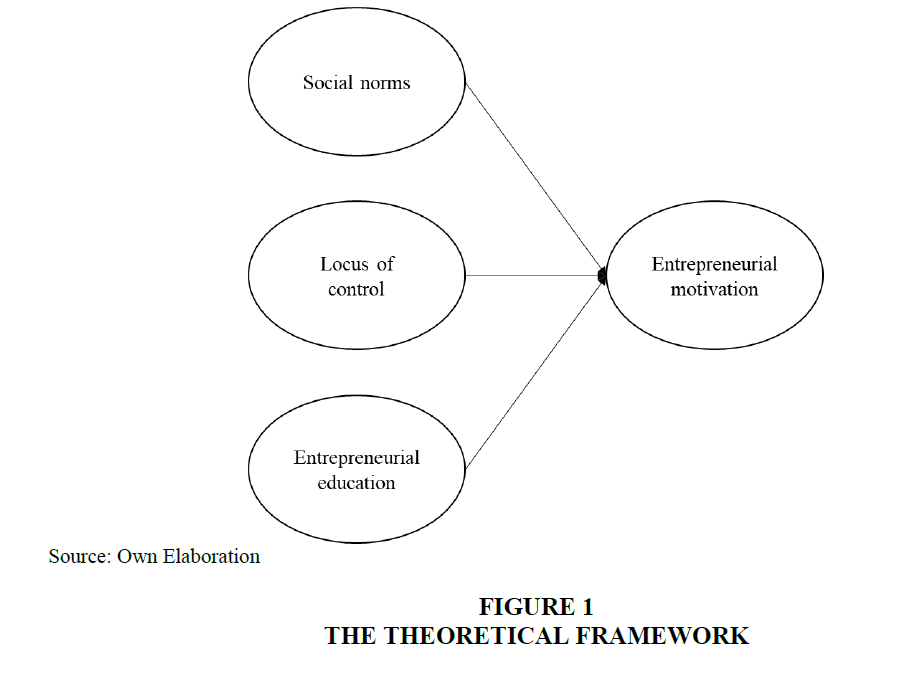 H1: There is a significant effect of social norms on entrepreneurial motivation.

H2: There is a significant effect of locus of control on entrepreneurial motivation.

H3: There is a significant effect of education on entrepreneurial motivation.

This research used survey method. Data were collected using questionnaire. The questionnaire used a 6-point Likert’s scale consisting of 1 for strongly disagree to 6 for strongly agree. Although scholars (Jacoby & Matell, 1971; Johns, 2010; Tsang, 2012) suggested an odd point for Likert’s scale, however in this study, the authors chose a six-point. According to Bertram (2007, p. 1), “a 4?point (or other even?numbered) scale is used to produce an impassive (forced choice) measure where no indifferent option is available”. The instrument was distributed during the class sessions with consent and cooperation of teachers. Up to 210 secondary students (83 males and 127 females) involved.

Data were analysed in two stages. The first phase used exploratory factor analysis (EFA). The EFA aims to determine which dimensions and indicators can be used to measure the variables, followed by reliability test for each dimension or variable. According to Hair Jr., Black, Babin, Anderson & Tatham (2006), a factor or variable is reliable if it has a Cronbach's alpha score of 0.7 or more. The second phase of analysis was confirmatory factor analyses (CFA). In order to get a fit model, the authors determine four criteria; probability (>0.05), CMIN/ DF (≤ 0.2), CFI (≤ 1) and RMSEA (≤ 0.05). The path is significant if it has a C.R. value or t-value of 1.98 or more (Holmes-Smith, 2010).

Figure 2 demonstrates a fitted model of the theoretical framework produced by confirmatory factor analysis (structural equation modelling). This model has probability, CMIN/DF, RMSEA, TLI and CFI scores of 0.183, 1.107, 0.023, 0.980 and 0.984 respectively. These scores are significant with the scores required for obtaining a fitted model. 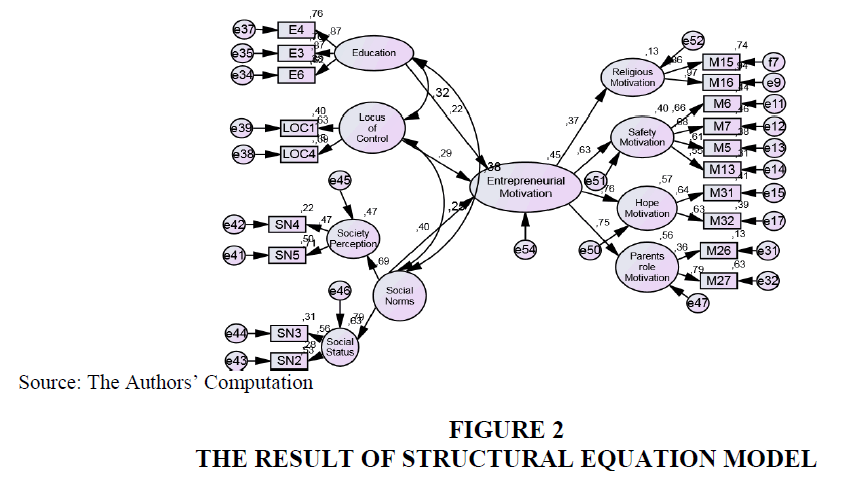 Table 2 also indicated that H1 was accepted with P-value of 0.041<0.05. Meanwhile, H2 and H3 was unaccepted with P-value of 0.07>0.05 and 0.06>0.05. The hypothesis decisions supported McGrath and MacMillan (1992)’s study and proved that social norms had positively and significantly impact on the entrepreneurial motivation. The standardized total effect showed that the social norms have strong effect on entrepreneurial motivation (0.396). Meanwhile, the finding of study related to locus of control was against the previous studies (Kusmintarti et al., 2014; Shapero, 1975; Venkatapathy, 1984). Similarly, in terms of entrepreneurship education, the result of study contradicted with the previous studies (Bili? et al., 2011; Van der Sluis et al., 2008).

The research findings implied the need for policymakers to create the entrepreneurship-oriented curriculum that would increase students’ motivation to start a business. It was also suggested that the entrepreneurship teachers should be more innovative in using the learning method and be a role model in entrepreneurial activity.