The digital economy is growing at a geometric rate in the world. At the same time that it is growing, Zimbabwe is experiencing fiscal budget deficits consistently. The traditional taxation system has been in use over the years and seems to be producing a fair share of revenue from its administration as shown below. This research paper examined the digital economy taxation, looking at the impacts that it has on the generation of value added tax, tax administration and the impact that it has on the network infrastructure. It is premised in the desire to pursue a stable Zimbabwean economy with budget surplus engulfed in the policies and administration that pertains to taxation. The study did not look at value added tax in isolation of the other revenue sources such as income tax, customs duty, withholding tax and capital gains tax but placed greater emphasis on value added as it is directly affected with trading on the digital platforms through E-commerce which includes B2C, B2B and C2C. A quantitate research methodology was adopted. Questionnaires were used to collect data. The results show that there are both positive and negative impacts that digitalisation brings to the country. It has a bearing on VAT, and on tax administration and also on the network infrastructure. Based on the study conclusions, there is need for the government to fully embrace digital technology on all its departments so that it will be easy the generate VAT using digital economy taxation.

Primarily, this study sought to assess and to devise means to address the taxation challenges that arise from digitalisation. According to Ribarsky & Ahmad (2018), the digital economy including its broadest sense has changed the system in which societies play and work. They add on to say companies today are now able to get the most out of digital tools to revolutionise the production processes as well as distributing and selling goods and services to markets that were formerly out of span. This provides considerable benefits to clients through better choice and affordable prices. In the world of business these advantages go further, data has turned out to be the turn, an explosion in “complimentary” services provided to clients. Digitalisation is changing many areas of our lives, in addition to the macro-level in terms of the manner in which our economy and society is controlled and functions. The wideness and swiftness of change have been often remarked upon; furthermore, this is also accurate when one considers the impacts of this digital revolution or transformation on taxation matters (IFAC, 2015; James & Nobes, 2016; Kuo. 2016).

This study will be aimed at assessing the significant insurmountable impact that digitalisation is bringing on the broader environment particularly in taxation, and will consider an update from the 2015 BEPS Action 1 Report. The thrust being on alleviating the tax challenges of the digital economy, which described the advancement of information and communications technology. The report also takes into account the history of work relating to the taxation issues emanating from digitalisation, together with the traditional taxation framework in the other continents and Africa, particularly in Zimbabwe as a developing country.

Digital economy taxation could prove to be a revenue collection basis in Zimbabwe, especially considering the low revenue levels experienced in the country for a period of time now. This has culminated in tremendous budget deficit which in turn limits the government’s spending ability and also leading to dilapidated standards of living of the nationals. A focus on the digital economy taxation gives rise to possibilities of a tax regime that is aware of the double taxation effects of digitalization and the underutilized tax heads for example VAT.

This study looked into the tax challenges of the digital economy from, but not limited to, data, nexus and characterisation. The consideration will also border on how taxing the rights on income obtained from cross border trading in the digital age should be allocated among countries. A vigorous understanding of how digitalisation is altering the method businesses is conducted and how they generate value is essential to make sure that the tax system responds to these challenges. The scope in particular will be focussing on new and transforming business models in the perspective of digitalisation.

Background of the Study

The research narrowed in on the Zimbabwean and African context of taxation from the digital age. Onyeiwu (2002) states that the axiom that Africa lags behind the industrialized world in digital technology and the digital divide between Africa and the developed industrialized world is not disputable. He further stipulates that there are inter-country variations in the digital technology in Africa and that there should be policy measures that ameliorate the digital divide within the continent.

With the above background, the IFAC and the OECD (2015) find it befitting to unequivocally state that the incorporation of countrywide economies and markets has increased significantly in recent years; this has put a strain on the international taxation rules that were planned more than a century ago. This entails that Zimbabwe has been receiving income and distributing funds over the digital platforms and as such the value created has to be subjected to tax. Legislation in Zimbabwe through acts of parliament such as VAT Act, Finance Act, Income tax act, Capital Gains Tax act prescribe the traditional taxation model. This is whereby taxes are from income generated from trade, value creation in the provision of goods and services and various capital gains. It ignores income and value generated through digital platforms (Wadesango et al., 2018; Merkx, 2017; Moosajee, 2016).

Previous studies have shown that digital economy taxation is a contentious issue, with Kuo (2016) citing that most approaches to turnover taxation brings about surveillance, efficiency, and incentive and identification problems. This will result in depicting 2 approaches to dealing with the extraordinary features of international trade in cyber space. The approaches are the origin principle joint with taxation of digital goods and services at the physical location of producers and the community principle in combination with a withholding tax. On the other hand, (Boccia and Leonardi, 2016; Wadesango & Mwandambira, 2018) denoted that sometimes services conducted on the digital platform do not give rise to the delivery of a physical object and examples of such are music software. It is then more difficult to identify precisely where profits are diverted, since it is difficult to categorize where the server considered to be the company headquarters is situated. It may be on some platform exterior to territorial waters. Even in standard cases, entities in the digital economy may not need an established organization in the country where they sell and are consequently not subject to tax on site (Rohatgi, 2015; Schellekens, 2016; Schenk & Oldman, 2007; Schwanke & Stanley-Smith, 2016)

In Zimbabwe the advent of technology has seen in the recent year’s introduction of programmes aimed at fostering the development of a more technological based economy. The government introduced STEM as a way to subsidise and support ways through which learning institutions can develop digital oriented students. This programme however left a huge gap in how tax will be administered and therefore collected from the digital platform. Upadhyay (2016) said estimations in the digital economy are US$35bn and expected to grow at a rate of 25% a year. With this blistering growth rate, a key question arises, how should digital economy be taxed? Similarly, in Zimbabwe the rate at which promotions towards digitalisation is so tremendous that it cannot be ignored.

The quantitative approach was used in this study. In this study a combination of random and purposive sampling was utilised. Data was collected using questionnaires. Data analysis was conducted after collection of data. Quantitative data collected was capture in Microsoft Excel format and cleaned. The cleaned data was then exported to statistical analysis software, SPSS, for an in-depth analysis. Data presentation went beyond basic descriptive statistics, but showed the relationship between variables, present data in form of frequency tables, graphs and pie charts which was used in the presentation of findings. 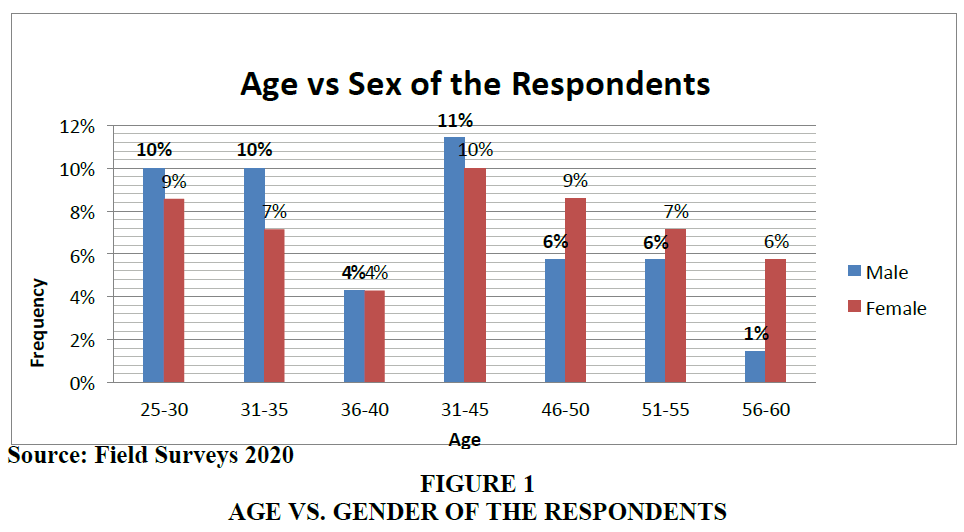 Figure 1 AGE vs. Gender of the Respondents

Educational Qualifications and Field of Work

In terms of highest level of educational qualifications, the majority 35% obtained a Master’s degree, 34% obtained a bachelor’s degree whilst 17% indicated that they have a Diploma, 9% and 4% respectively indicated that they had a PHD and a certificate respectively as the highest educational qualification. The higher level of qualifications indicated that respondents were able to provide necessary information on the impact of digital economy taxation on tax revenue administration in Zimbabwe. It was also observed that the respondents representing all fields under study had the requisite qualifications to give a credible opinion. One company has 14% and 16% of the respondents attaining at least a bachelor’s degree, whilst compliant customers have the highest number of PHD holders of up to 6%. Representatives from the industry have 13% and 10% holders of a Master’s and Bachelor’s degree respectively. This indicates that conclusions draw from these various sectors represents fair opinion regarding the market perspectives (Figure 2). 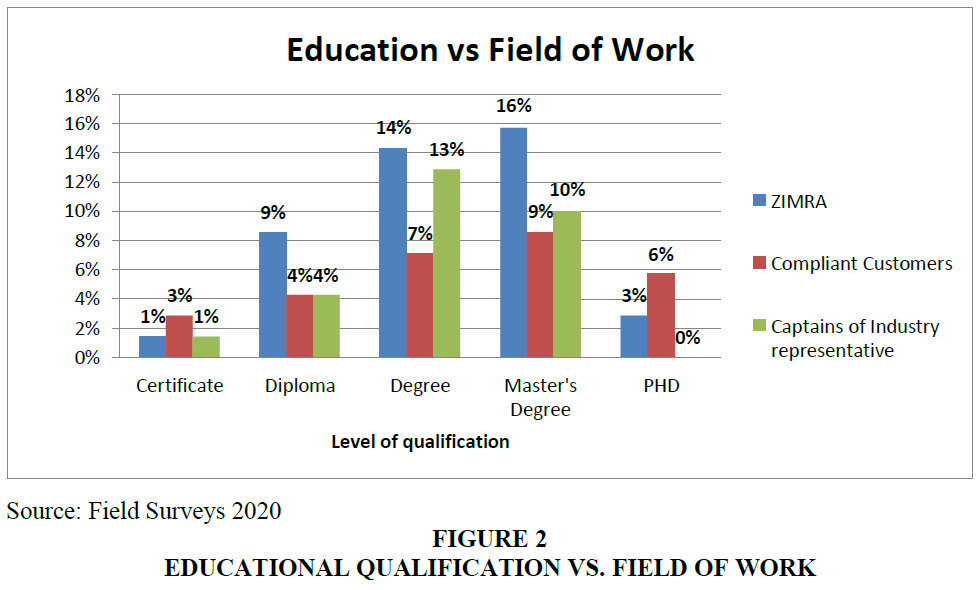 Use of digitalization in VAT

Regarding the use of digital technologies in taxation the respondents were asked if they use digital taxation in VAT and the period (in years) for which they been using digitalization. This was presented in the figure below, 90% of the respondents indicated that they use digitalization in value added tax and 7% of the observations indicated that they do not use it (Figure 3). 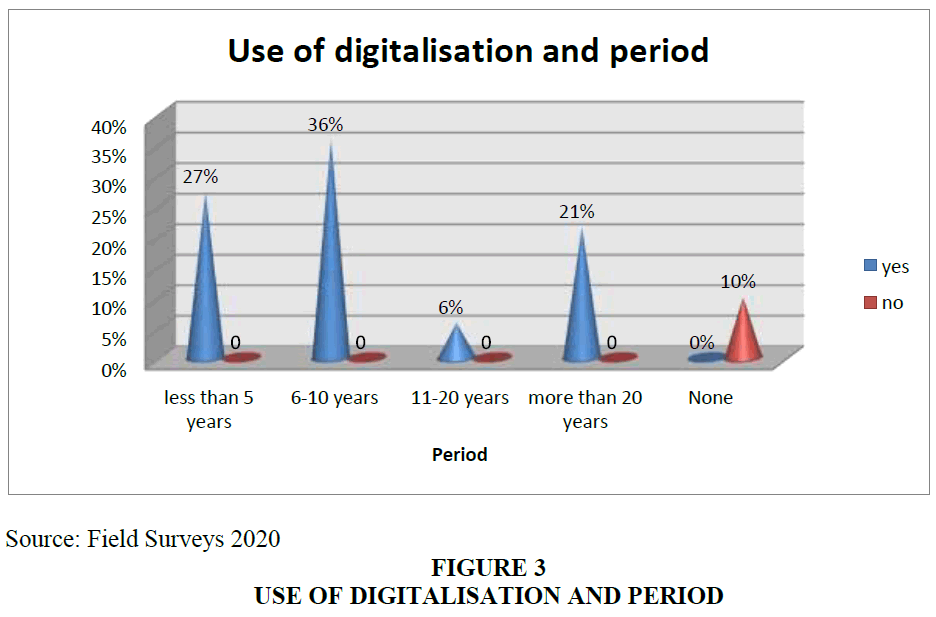 Figure 3 Use of Digitalisation and Period

The respondents that use digital taxation in VAT indicated that 27% used it for less than 5 years. The highest frequency being 36% users who have used between 6 and 10 years, 6% being 11 to 20 years and 21% used digital technology for more than 20 years. These findings indicated that the targeted respondents have enough experience and knowledge on the impact of digital economy taxation on value added tax in Zimbabwe and it is in line with Wadesango et al. (2018)’s findings on the same issue as well as Johnson & Aboyeji (2015).

The above impact can be described better in the Figure 4 below: 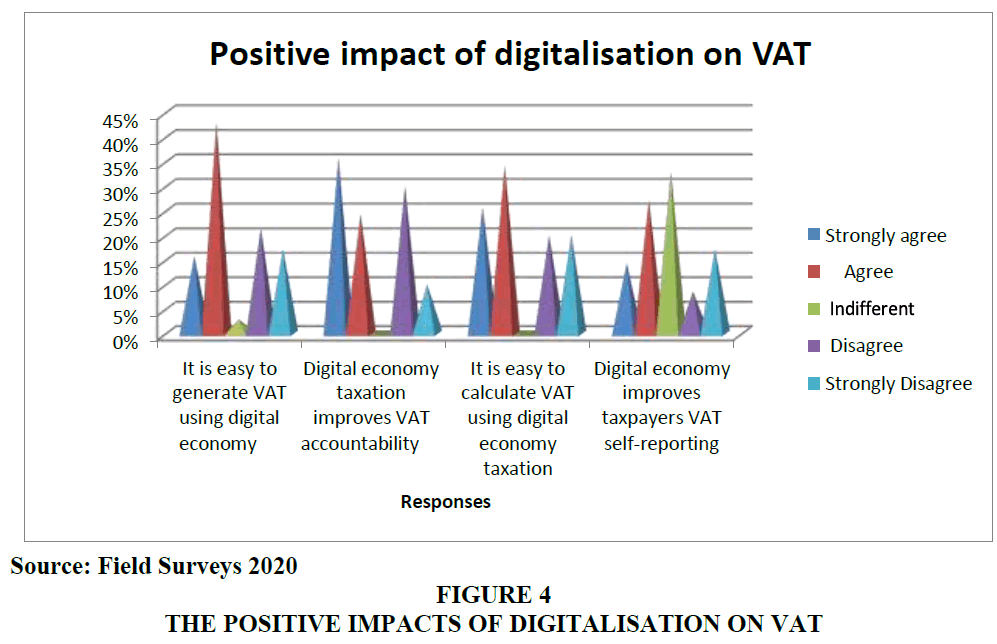 Figure 4 The Positive Impacts of Digitalisation on VAT 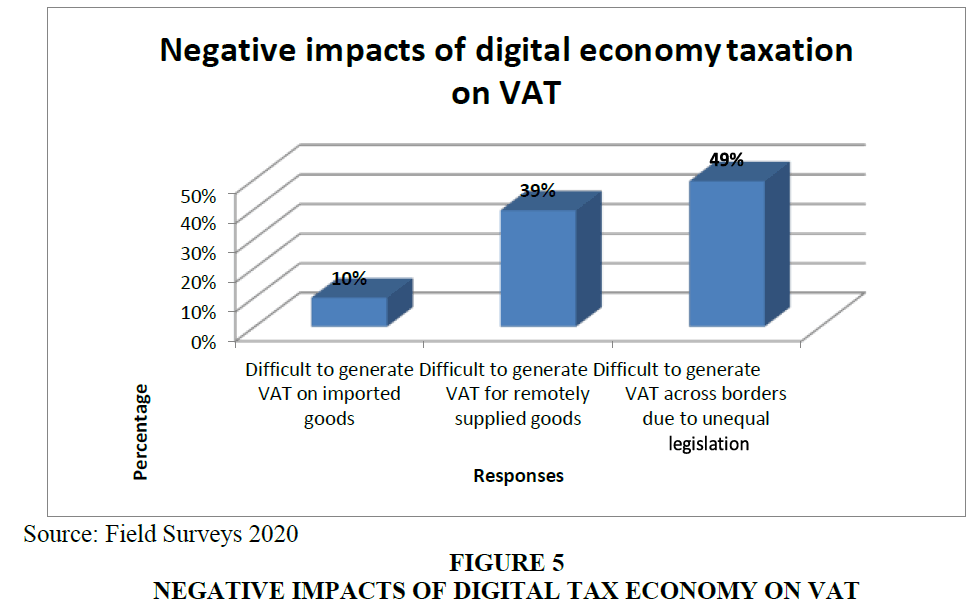 Follow up interview questions to various stakeholders gave rise to the below findings in impacts of digitalization in VAT that are most linked to the different legislation which makes it difficult to levy collect VAT using the digital platform. The respondents from the industry representatives highlighted that as long as there no multilateral agreements internationally it will be difficult to generate VAT on the digital platform, also citing reasons pertaining to the network infrastructure which will be covered in the sections to follow. 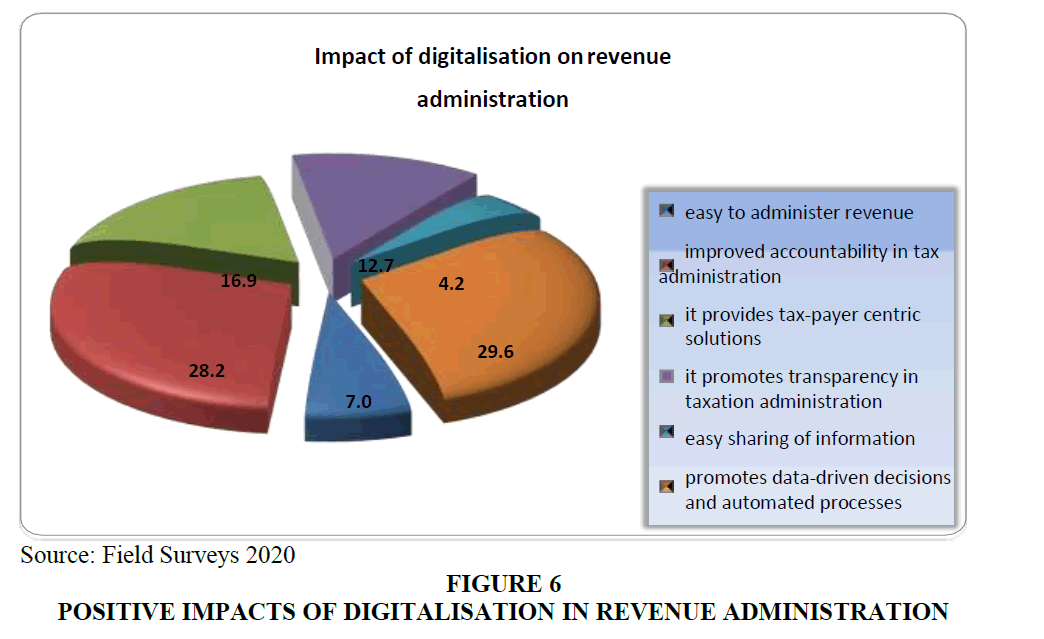 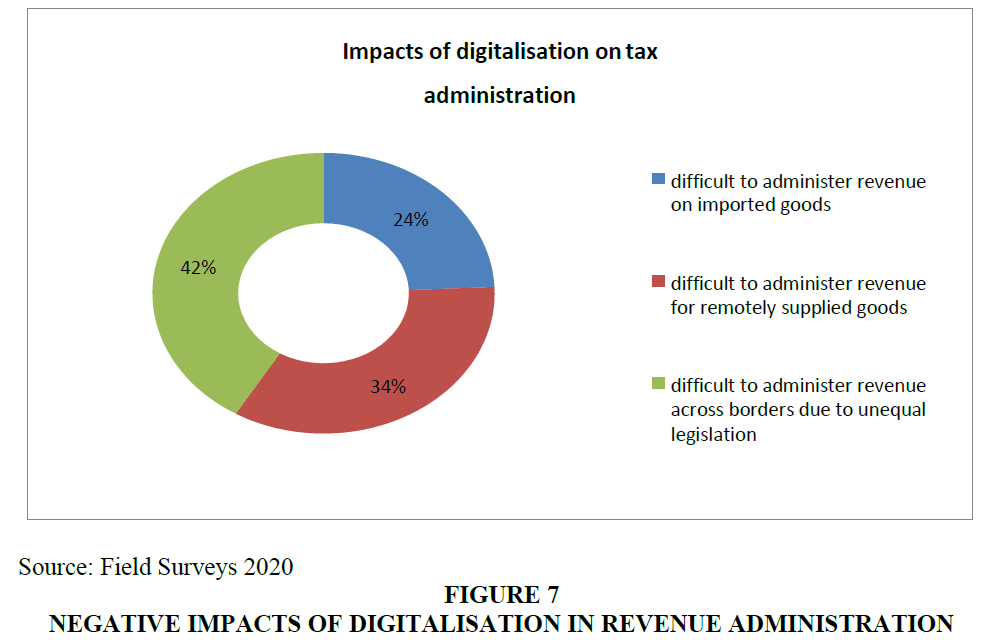 It is apparently clear that the budget deficits that the nation has been facing can be curtailed by the use of taxation. This will have to be done on a broader perspective including taxing the digital economy. Though it is obvious that the infrastructure that supports digital economy taxation is not yet adequate in Zimbabwe, the authorities can make us of the suggestions made in this research and literature provided to help craft legislation and device strategies to make full use of the digital economy taxation. Based on the results found in this study, there are both positive and negative impacts that digitalisation brings to the country. It has a bearing on VAT, and on tax administration and also on the network infrastructure. Based in educated opinion of the population selected in this study, it can therefore be unequivocally stated that we cannot look at taxation in isolation of the digital economy taxation. Indication from the captains of industry are that the world is moving towards the digital age and hence Zimbabwe has prepared to counter the digital transformation and to embrace it for the betterment of both the industry and the national income.,

Based on the study conclusions, the following recommendations are proposed:

1. There is need for the government to fully embrace digital technology on all its departments so that it will be easy the generate VAT using digital economy taxation.

2. Cooperation and international consensus are required to tackle similar challenges of generating VAT across boarders where there is different legislation.