Mohammad & Jaafer (2012) affirm that firms can use either equity or debt to finance their assets. But where the interest was tax deductible, firms would maximize the value accruable by using more debt. Equity capital refers to shareholders contribution, such as common stock. The debt capital in a firm’s capital structure refers to borrowed monies, such as bonds, loans, debenture, and commercial papers. Capital structure decision becomes relevant to any business enterprise which has the need to maximize shareholders’ return and achieve competitive advantage. The mix/ratio of debt and equity in the company’s mode of financing refers to capital structure. Some organizations prefer more debt while others prefer more equity in financing their assets.

Financial leverage refers to the use of debt to acquire additional assets. Financial leverage means trading on equity which occurs when a firm uses bonds, other debts and preferred stock to increase its earnings on common stock. A firm might use long term debt to purchase assets that are expected to earn more than the interest on the debt. The earnings in excess of the interest expense on the new debt will increase the earnings of the firm’s common stock holders. The increase in earnings indicates that the firm was successful in trading on equity. If the interest expense on the new debt is higher than the earning from the newly purchased assets the earnings of the common stock holders will decrease (www.accountingcoach.com). Capital structure is the mix of various sources of long –term funds used by or an enterprise to finance its capital assets. The long-term sources of financing are mortgage bonds, debentures, preferred stocks, common stock and retained earnings (Ezenwakwelu, 2017). This paper seeks to ascertain the determinants for the level of equity and debt in the firm’s capital structure and also examines the extent to which financial leverage affects firm’s financial performance.

Net income approach: This theory states that an organization can increase its value and reduce the overall cost of capital by increasing the proportion of debt in its capital structure. This approach depends on the assumption that the cost of debt is less than the cost of equity, there are no taxes, and the use of debt does not change the risk perception of investors. The reasons for the assumption that cost of debt is less than cost of equity are that interest charges are usually lower than dividend rates and that, interest charges are tax deductible. (www.shareyouressays.com).

Net operating income approach: This theory was suggested by Durand. The theory states that change in the capital structure of a firm does not affect the market value and the overall cost of capital remains constant despite the method of financing. The theory was supported by the assumption that the market capitalizes the value of the firm as a whole. At every level of debt equity mix, the business risk remains constant (www.shareyouressays.com).

Modigliani and miller approach: This hypothesis resembles the net operating income approach if taxes are ignored. But when taxes exist, the hypothesis will be similar to the net income approach. The M.M hypothesis states that if taxes are ignored, capital structure does not affect the cost of capital. But as financial leverage increases, the cost of equity, the overall cost of capital remains constant. The theory affirms that a firm’s operating income is a determinant of its total value. And that above certain limit of debt, the cost of debt increases, due to increased financial risk but the cost of equity falls. The theory reinstates that where there is tax, the value of the firm increases and the cost of capital decreases on the use of debt. Optimum capital structure is realized by increasing the debt mix in the equity of the firm. Modigliani and Miller (1958) established that the value of a firm is not affected by the capital structure mix of debt and equity in a perfect market.

The tradeoff theory: This theory propounds that debt finance is usually used when a firm has more tangible assets while equity finance is usually used by firms that have more intangible assets. Thus, there should be an optimal debt- equity ratio (Al-Tally, 2014). The tradeoff theory states that optimal debt level is realized by comparison of cost of debt financing on the benefits (Aliu, 2010) (Figure 1). 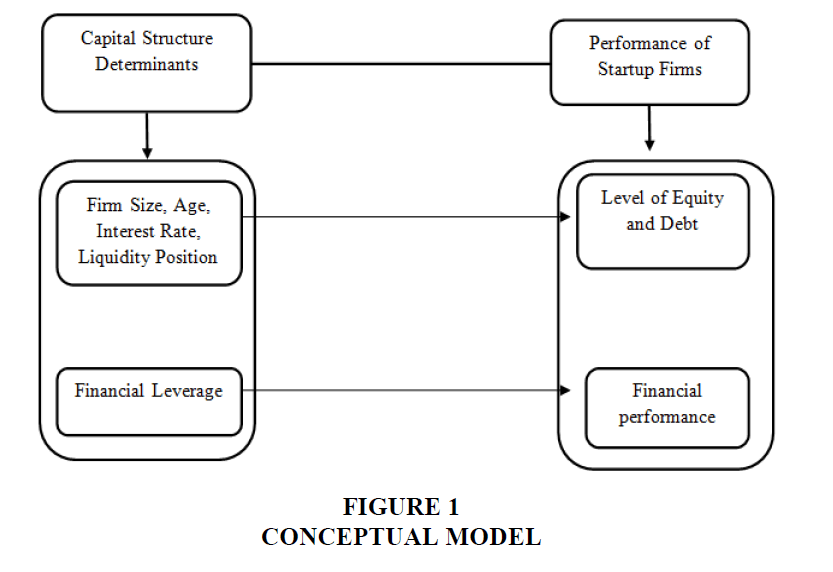 Business size determines the extent of raising funds in an organization. People subscribe to a firm's share capital if they know the size of the business and prospects of its success. The larger the firm, the more possible it can issue debt and lower the risk of bankruptcy (Titman and Wessels, 1988).

Warner (1977) posits that a large firm would have lower transactions costs of external financing than a small firm, making it difficult for the small firms to acquire debt and preventing them from utilizing external financing. Generally, big firms have diversified business strategy, which enables them to have stable earnings that reduce the risk of bankruptcy and contribute in meeting their debt obligations (Warner, 1977; Marsh, 1982).

The liquidity position of a firm is necessary for determining its capital structure. Corporate organizations consider their liquidity position before embarking on the issue of debenture [debt issue]. This prevents bankruptcy or being unable to pay debts.

A firm is said to be liquid when it has the ability to produce cash required in servicing its debt obligations.

Cost of capital is considered by firms when raising funds. Experience gathered by firms proved that the cost of debt is lower than the cost of equity capital because firms usually borrow capital less than it earns. Also, interest charges for borrowing funds are tax deductible. An increase in debt ratio results in increased variability in income.

The desire of a firm to have control of the organization may determine the finance source the firm may use. Thus, the firm may prefer debt issues and preferred stock [which have no voting rights] to common stock (Ezenwakwelu, 2017).

Financial leverage is a debt incurred by a firm from financial institutions with the intention that such investment will earn more than the cost of interest charged on the debt (Abubakar, 2015). Additionally, financial leverage employed by a firm is motivated by the intention of earning higher returns on debt than the cost (Enekwe et al., 2014). The possible outcomes with the use of fianacial leverage can be profit maximization or minimization. Thus, the high debt level which should be paid at a cost exposes the firm to risk (Al-Otaibi, 2013).

Financial performance analysis deals with the following items: capital employed, asset base, sales turnover, dividend growth (Omondi & Muturi, 2013). Financial performance is expressed with regards to increase in stock prices, sales and dividend (Maghanga & Kalio, 2012). Moghadam & Jafari, (2015) examined the role of leverage on firm’s performance. The finding revealed that leverage had a significant positive relationship with firm’s performance. The study concluded that the higher the debt level, the more the profitability of the firm.

Mira & Garcia (2003) studying the SMEs in Spain found a negative relationship between cash flow and debt as companies have a preference for financing their investments with internal generated funds instead of accessing external debt.

This study relied on secondary source of information and thus focused on conceptual exploration, review of theories and critical analyses of empirical previous studies. The research questions were discussed in the literature review. The study made critical review of the previous works that were related to this study. The study presented some practical illustrations and solutions which were derived from the theory provided for the study. The practical illustrations and the solutions will benefit startup firms. The data were collected through books, journals and internet.

Table (1) reveals that the more a firm is levered, the higher the rate of return to the equity holders. Levered firms in addition, have the advantage of tax shelter to the extent of the leverage. This was shown in the illustration where firm, 'O' paid a tax of ₦120,000 while firm ‘P’ paid tax of ₦112,500 and firm 'Z' paid ₦I06,500. Firm Z has a higher rate of return because it was more levered. Startup firms should learn that liquidity position of a firm and interest rate on capital are considered before going in for debt. Table 1 showed that the net operating income was strong and that the interest rate for borrowing fund was not high. This reveals an increase in the rate of return to equity holders.

The illustration on three firms: X Y and Z, each capitalized at N4 million. The shares of each of the companies are selling at ₦l.00 par value and net operating income for each of the companies is ₦100, 000. If the firm X is not levered and firm Y acquired ₦500, 000 at 6%debenture in its capital structure while firm Z acquired N1 million at 6% debenture in its capital structure; with a tax-rate of 20%, what is the rate of return for the three firms?

Table (2) shows that (when the net operating income is week) unlevered firms will be in a better condition than the levered firms. Thus, in the illustration above, firm Z had the lowest rate of return followed by firm Y. Startup firms will learn that a firm which its net operating income (earnings before interest and tax) is weak has no need of debt issue. Such a firm would raise funds by subscribing for shares (equity stocks) so as to build enough retained earnings and reserves which can support debt issue in future.

The level of debt and equity in a company’s capital structure has risk and return implications. Financial leverage is the degree to which a firm uses debt and preferred equity. The more a firm uses debt financing, the higher its financial leverage. The higher the financial leverage, the higher the interest payments which negatively affect the firm’s earnings per share. Increased level of financial leverage may result to increase in the firm’s profits which ultimately cause the firm’s stock price to rise and fall frequently. However increase in the stock price means that the firm will pay higher interest to shareholders. A firm should keep its optimal capital structure in mind when making financing decisions to assure that any increase in debt and preferred equity increase the value of the firm. So long as the net operating income of a firm is strong, the more a firm is levered, the higher the rate of return because interest paid on debt is tax deductible.

The research has limitations because it has focused on theoretical and conceptual review. The research questions were discussed in the literature review, no primary data were collected. Future researchers can conduct empirical studies and thus, collect both primary data and secondary data.

Abubakar, A. (2015). Relationship between financial leverage and financial performance of deposit money banks in Nigeria. International Journal of Economics, Commerce and Management, 3(10), 759-778.