Competing Extended TPB Models in Predicting Entrepreneurial Intentions What is the Role of Motivation?

This study extends the theory of planned behavior by adding motivation variable in an entrepreneurial context. In this current study are two different roles of motivation in two different research models tested: motivation as a predictor and motivation as a predicted variable. Therefore, this study aims to investigate the role of motivation in those models. This study involves 273 final year undergraduate university students in Indonesia who were selected conveniently. Data were measured using exploratory factor analysis and structural equation model. This current study found how motivation performs well in the models examined. The authors discuss recommendations for practitioners and future research.

Another crucial factor which affects behavior can be motivation. Ryan & Deci (2000) conclude both motivation and intention have a role in predicting human behavior and that a connection between intentions, motivations, and behavior exists. Similar suggestion pointed out by Elfving et al. (2009) stated that investigating entrepreneurial intention will not complete without involving motivation. However, while motivation is recognized as a factor affect behavior, yet it is not a well research area of entrepreneurship (Carsrud & Brännback, 2011; Kuratko et al., 1997).

Regardless of the importance of motivation in influencing behavior, TPB does not explicitly describe the role of entrepreneurship motivation (Bagozzi, 1992). The argument for not taking into account explicitly the role of motivation is because “Intentions are assumed to capture the motivational factors that influence a behavior; they are indications of how hard people are willing to try, of how much of an effort they are planning to exert, in order to perform the behavior” (Ajzen, 1991).

Regards to these differences, there is a paucity of study comparing both models in a single paper comparing both models. The existence of this comparative study will provide a significant academic contribution in capturing the understanding of the relationship between motivation and intention. Furthermore, a practical contribution will also be obtained regarding choosing the most appropriate model to increase entrepreneurial behavior in a country.

This study aims to compare the two models in the context of Indonesia. As one of the emerging countries with the fourth largest population in the worlds, Indonesia gives particular attention to the development of entrepreneurship, based on the consciousness that increasing the number of entrepreneurs will contribute positive effect towards economic growth and the reduction of the unemployment rate (Frazier, 2012; Tambunan, 2011).

Ajzen (1991) suggests that intention is directly affected by (i) attitude; (ii) subjective norms and; (iii) perceived behavioral control. Attitude toward the behavior refers to the degree to which a person has a favorable or unfavorable evaluation or appraisal of the behavior in question (Ajzen, 1991). Positive attitude toward a behavior will result in an intention to engage in the behavior. (Elfving, 2008; Fini et al., 2012; Liñán, 2004; Liñán & Fayolle, 2015). Perceived behavioral control refers to the perceived ease or difficulty of performing the behavior (Ajzen, 1991). Perceived behavioral control which has similarity with bandura’s self-efficacy concept, has been proven as a consistent and significant predictor of career-related intention (Ajzen, 1991; Bandura, 1986). People tend to choose a career based on their perceived behavioral control (Driver, 1988). In the context of entrepreneurship, subjective norms refer to individual's perception of approval or disapproval opinion of reference group towards entrepreneurial career decision (Ozaralli & Rivenburgh, 2016). The opinions of important others (i.e., family members, close friends and other influential people such as teachers, successful entrepreneurs, enterprise advisors) are believed to shape the formation of many entrepreneurial intentions (Kolvereid, 1996).

Traditional motivation studies focus on three essential aspects: activation, that is what activates a person of doing a specific type of action, self-direction, that is the reasons of an individual in choosing a particular kind of behavior, and preparedness of response, that is the reasons of individual act differently given the same stimulus (Pervin, 2003). All of these motivation studies can be classified into two group of approaches, drive theories and incentive theories (Carsrud & Brännback, 2011). Drive theories reveal the existing of internal stimulus, called push motives, which stimulate a tension and drive an individual to behave particularly to reduce the tension. In contrast, incentive theories point out the existing of goals, called the pull motives, which direct an individual to behave particularly to achieve the goals (Carsrud & Brännback, 2011). The more recent theory called temporal motivation theory, attempts to combine motivation theories across disciplines.

In context of entrepreneurship, personality factors which dominantly influence entrepreneurial behavior is need for achievement and needs for power (Singh, 1997). Economic motive traditionally viewed as the primary external motive which drives an individual to be an entrepreneur. Recently, scholars have found other relevant motives, such as social gains and lifestyle (Carland et al., 2007). Employing the goal pursuit approach, studies have been investigated motivation utilize different tools, such as expectancy theory (Renko et al., 2012), self-determination theory (Ryan & Deci, 2000), and self-regulation theory (Bagozzi, 1992).

Motivation As Antecedents Of Intention

Solesvik (2013) argue that beliefs related to perceived high-entrepreneurial motivation. Since attitude, subjective norms, and perceived behavioral control are shaped by belief (Ajzen, 1991), then motivation is assumed affects those three determinants of entrepreneurial intention. Theory of Self-Regulation (TSR) proposed by Bagozzi (1992) also pointed out the existence of a factor which did not account for in TPB, namely desire, a motivation based variable.

The role of entrepreneurial motivation as an antecedent of intention has been proven by Leone et al. (1999), Purwana et al. (2015), and Solesvik (2013). Therefore, we suggest the first hypothetical model being tested as follows. Figure 1. 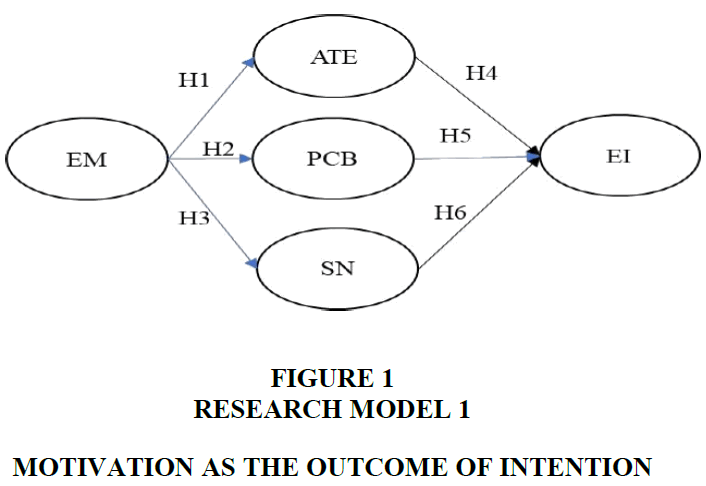 Motivation As The Outcome Of Intention

A theoretical separation between goal intention and implementation intention by Gollwitzer (1993) supports the idea of motivation as a mediating between intention and behavior of entrepreneurial. In his theory, Gollwitzer (1993) proposed that intention should classify into goal-oriented intentions (“I intend to achieve x”) and implementation intentions (“I intend to do y when I encounter situation "). Problems of actualizing the goal intentions into an assortment of actions are various; among others involving the initial step to start. When people are immersed with their routine activities, experiencing an intense emotional experience, or being tired, they will not seize the opportunity available to transform their goal intention into action, because the opportunity is failed to attract attention. Attention is focused on other things that are not relevant to the intended goal.

Research also has found support for different stages of intentions (Gollwitzer & Brandstätter, 1997; Gollwitzer & Schaal, 1998), which indicate that the entrepreneurial process may not be linear and suggests goal-directed behavior with different levels of goals that serve as external motivators (Lawson, 1997). Bay & Daniel (2003) conceptualized the hierarchy of goals, which implicitly argues for differences in motivational intensity, as a requirement for a goal to be enacted upon. Malebana (2014) reveals that entrepreneurial motivation is affected by entrepreneurial intention. Built on those arguments, we propose the second model as follows. Figure 2. 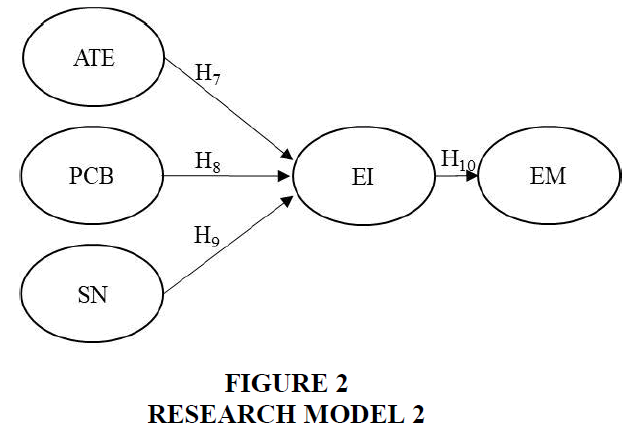 The questionnaire was developed based on previous studies (Krueger et al., 2000; Malebana, 2014; Solesvik, 2013). Attitude towards entrepreneur consisted of five items to measure: advantage, attractiveness, readiness when there is an opportunity, preference, satisfaction. Perceived behavioral control was indicated by six items to measure: control of creation process, control over the situation, preparation, knowledge, optimism of starting a new business, the optimism of being a success. Subjective norms were captured by six items to measure: approval and judgment from friends, family, colleagues. Entrepreneurial intention consisted of four items to measure readiness, goal, effort, and persistence. Entrepreneurial motivation was indicated by nine items to measure work independence, challenge, creative talents, earn money, exciting job, imitating role model, market opportunity, prestige, need a job. All of the items were measured by five points Likert scale, from strongly agree to strongly disagree.

In the study, exploratory factor analysis was performed to determine the underlying factorial structure of the scale. The result of the Bartlett's indicated that process of factor analysis could be continued since KMO value of each variable is greater than 0.50, and the p-value of Bartlett's test for each variable is less than 0.05. For reliability test, the range of α Cronbach value is between 0.762 and 0.905.

The first model tested was motivation to TPB model (model 1). Results of the goodness of fit test of the model with a probability score of 0.57, RMSAE score 0.029, GFI score 0.946, AGFI score 0.925 and CMIN/DF 1.236. Since all of the results achieve the criterion, we can conclude that the model is fit. 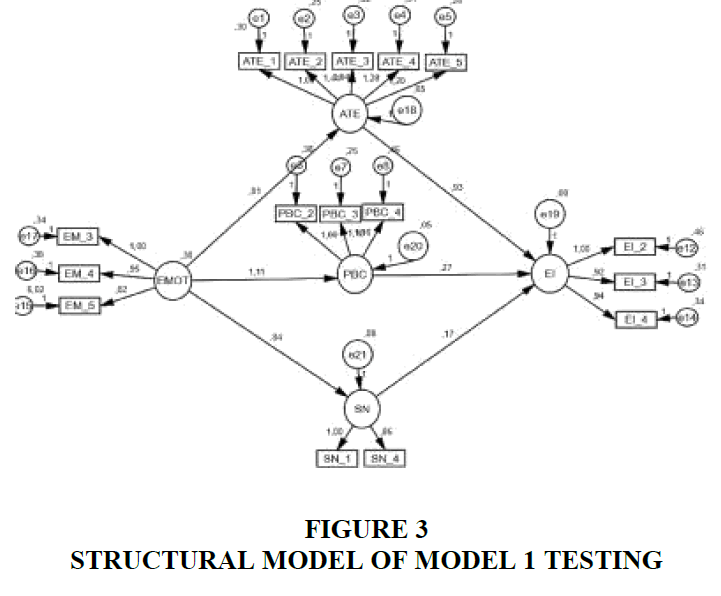 The Result of Hypotheses Testing Model 2 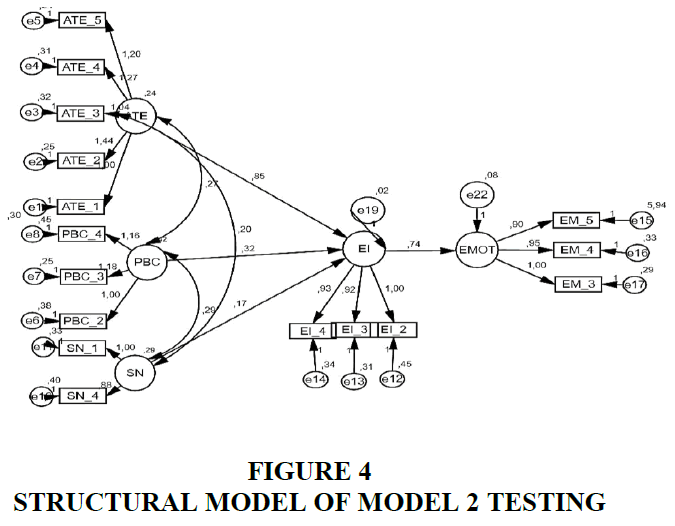 However, regards to CR scores as seen in Table 2, both model 1 and model 2 found no evidence of a link between subjective norms and entrepreneurial intention (1.151 for model 1 and 1.101 for model 2).

However, the role of subjective norms as the antecedent of entrepreneurial intention was not found. The result similar to Krueger et al. (2000) but contrast with Ozaralli & Rivenburgh (2016) and Schlaegel & Koenig (2014). This finding was not surprising since a systematic literature review by Lortie & Castogiovanni (2015) found that in 86% articles which were reviewed, subjective norms to intentions were less relevant compared to two other entrepreneurial intention's determinants in TPB model. In our case, we suspected this finding comes from the characteristics of the millennial generation represented by the students in our sample, which is more independent in making a decision (Monaco & Martin, 2007) compare to the older generations, even in countries which have a strong culture of social bounding like Indonesia. Thus, even their parents as representative of the older generation have a negative opinion about entrepreneur as a career choice; it does not affect students' intention.

The effect of entrepreneurial intention on motivation was proven and supported Carsrud & Brännback (2011); Gollwitzer & Brandstätter (1997); and Malebana (2014). This finding supported the argument which claimed to transform intention into action; motivation plays a significant role.

The data were collected from 273 final year’s undergraduate university students in a public university. Convenience sampling was employed to select the respondents. Exploratory factor analysis and structural equation model was utilized to analyze the data. The finding confirmed that in both models, motivation had a relationship to variables in TPB. Then, the two models could be applied to investigate the link between entrepreneurial motivation and intention. However, model 2 which tested entrepreneurial motivation as the prediction variable of entrepreneurial intention slightly superior compared to model 1 in term of the goodness of fit.

For both models, the relationship between subjective norms and entrepreneurial intention was unproven. It is suspected as a result of the way of thinking of students that which is more independent compared to the older generations. Thus, unfavorable opinion of being entrepreneur which might be exposed to them has no impact on their intention.

Universities particularly in Indonesia need to readdress their entrepreneurial curriculum, learning strategies, and learning environment to boost students’ motivation to be an entrepreneur. Since opportunity is the important motive of being an entrepreneur, business opportunities should be introduced early and expose frequently. It will require such a holistic curriculum where entrepreneurship should be embedded in many courses instead of relying on a single entrepreneurship course. The learning strategies should able to raise the students’ needs of becoming independent, so they no longer perceive jobs are synonymous with salary and pension. Providing business experience, we believe will amplify students’ intention and motivate them to implement the intention as well.

The using of convenience sampling is the limitation of this study respects to the generalization of the result. Regarding to the importance of motivation and intention in predicting behavior, the study did not involve entrepreneurial behavior variable in the model. Thus, we suggest future research should build a more comprehensive model by adding the behavior variable in the model since it will contribute valuable insight into entrepreneurial behavior research. Another suggestion is related to the role of the entrepreneurial motivation. Since both roles as a predicted and prediction construct were found, identifying and differentiating types of motivation in each role will be worthwhile.