The increased association between commodity markets has always attracted the interest of researchers, investors and policymakers. In one of the earlier studies on commodity price movements, Pindyck and Rotemberg (1990) observed a pattern in price movements between unrelated commodities. This finding led to several studies analysing this phenomenon and the debate was further intensified with the financialization of commodity markets during early 2000s. For example, Soytas, Sari, Hammoudeh and Hacihasanoglu (2009) argued that the excess comovement among commodities could be attributed to the similar influence of macroeconomic variables on all commodity markets. Nevertheless, among all commodities, crude oil has acquired unprecedented importance because of its share in the energy sector across nations. Most economies are exceedingly reliant on crude oil for their energy needs and as a result it could result in huge import bills for crude oil importing nations. Besides, such economies could find it difficult to sustain their trade balances because of price fluctuations in international crude oil markets. Therefore, the importance of the commodity markets like crude oil, underlines the need to investigate the crude oil price fluctuations to safeguard the interest of numerous stakeholders.

Motivated by the earlier literature, the primary objective of this study is to investigate the dynamic correlation between crude oil and precious metals (gold, silver, platinum and palladium) using Dynamic Conditional Correlation-Generalized autoregressive conditional heteroscedasticity (DCC-GARCH) approach proposed by Engle (2002). Second, the covariance and variance structure obtained from DCC-GARCH framework were used to generate the hedging ratios and portfolio weights between crude oil and precious metals. Kroner and Sultan (1993) approach was used to construct the hedging ratios and Kroner and Ng (1998) approach was used to construct the portfolio weights. Several authors have used the hedging ratios and portfolio weights to investigate the dynamics between different markets, for example, Baser & Sardorsky (2016), Ku et al. (2007) and Maghyereh et al. (2017). Third, to check the robustness and asymmetric characteristic of the relationship, the investigation was also carried out using Asymmetric DCC.

Rest of the paper is structured as follows: Next section explains the methodology. Section 3 reports the data and preliminary analysis. Section 4 explains the empirical findings followed by conclusion in section 5.

DCC-GARCH is based on the decomposition of the conditional covariance matrix into two time-varying parts: First, conditional standard deviations matrix and second into correlations matrix (Engle & Sheppard, 2001; Engle, 2002). The DCC-GARCH process can be explained as follows:

At least two criteria needed to be satisfied while defining the DCC-GARCH process. First, Ht is to be positive definite. Second, elements in Rt should be less than or equal to one.

Maximum likelihood estimation is used to estimate the model. The scalar parameters α and β have to meet certain conditions to ensure Ht to be positive definite: first,

The resultant correlation between two series depends on the standardized residuals. When the residuals move in the same direction, they push the correlation up and then with the passage of time and with complete information absorption gradually fall back to the average level. On the other hand when residuals move in opposite directions, it will result in low correlation and again the correlation will move towards the average with the passage of time. The time taken to move to different positions is governed by the parameters α (short run persistence) and β (long-run persistence).

Capeeiello et al. (2006) suggested the modification of DCC model by adding an asymmetric term to the model, which was termed as ADCC-GARCH (Asymmetric DCC). A positive asymmetric term indicates that negative residuals have more impact on the variance than positive residuals. It is designed to capture the asymmetric effect, i.e., the volatility of any financial asset tends to get affected more during the unexpected fall in asset prices (bad news) than an unexpected increase in asset price (good news). With regard to ADCC the dynamics of Ut can be shown as:

Kroner and Sultan (1993) argue that hedge ratios may be constructed by using the conditional volatility estimates. An asset (x) on which a long-position is taken may be hedged with a second asset (y) by taking a short position. Thus, the hedge ratio between the two assets may be represented as:

is the hedge ratio between asset x and y at time t ,

is the conditional covariance between asset x and y at time

is the conditional variance of asset y.

Kroner and Ng (1998) suggest that multivariate GARCH estimates can be used to construct optimal portfolio weights.

is the weight of asset xin a one dollar portfolio of y and at time t.

is the conditional covariance between asset x and y at time t,

is the conditional variance of asset y . The weight of asset y at time t is

Weekly data has been collected from January 2000 to March 2017. Crude oil spot prices have been collected from US Energy Information Administration and are reported in US dollar per barrel. On the other hand, world precious metal prices for gold, silver, platinum, palladium have been collected from Bloomberg data services and are reported in US dollar per troy ounce. Log return series were calculated to take care of the unit root and same were used for the rest of the analysis. Descriptive statistics are shown in Table 1. It can be noted that gold provides highest mean returns followed by silver and palladium provides the least return among the selected series. The initial volatility estimates (standard deviation) suggests palladium returns to be highly volatile followed by crude oil returns. Skewness values are negative for all the return series indicating that most values are distributed to the right and suggests longer tail on the left. Except for silver returns, all other returns are platykurtic indicating shorter and thinner tails. The last four columns of Table 1 show the result for Ljung-Box test and Jarque-Berra test respectively. Ljung Box test indicates the presence of serial correlation of second moments in the case of crude oil, platinum and palladium. Jarque Berra test suggests the non-normal distribution of all the return series. These tests suggest the possibility of using GARCH like models to examine the dynamics between crude oil and precious metals. 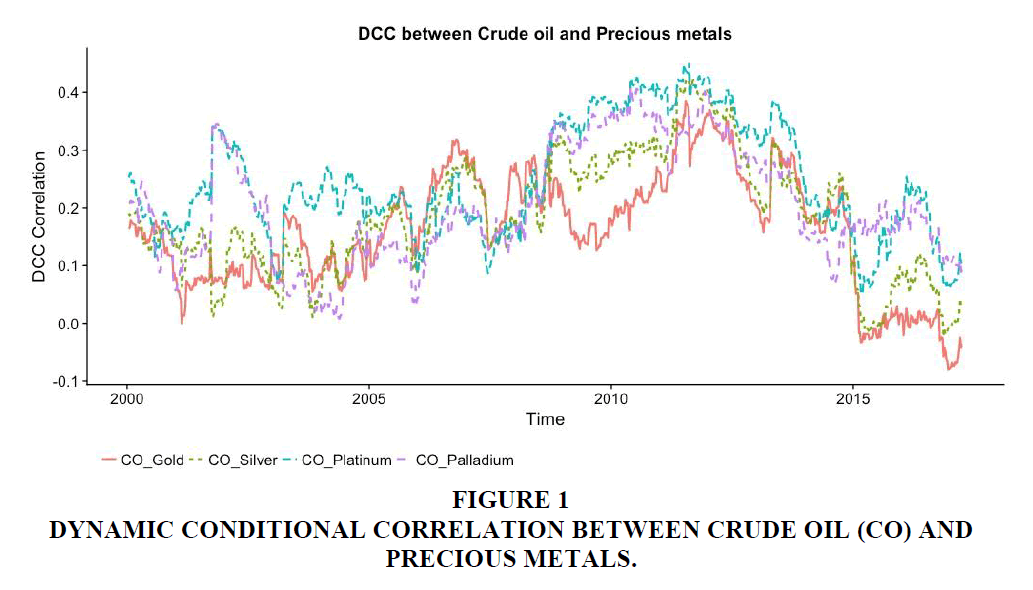 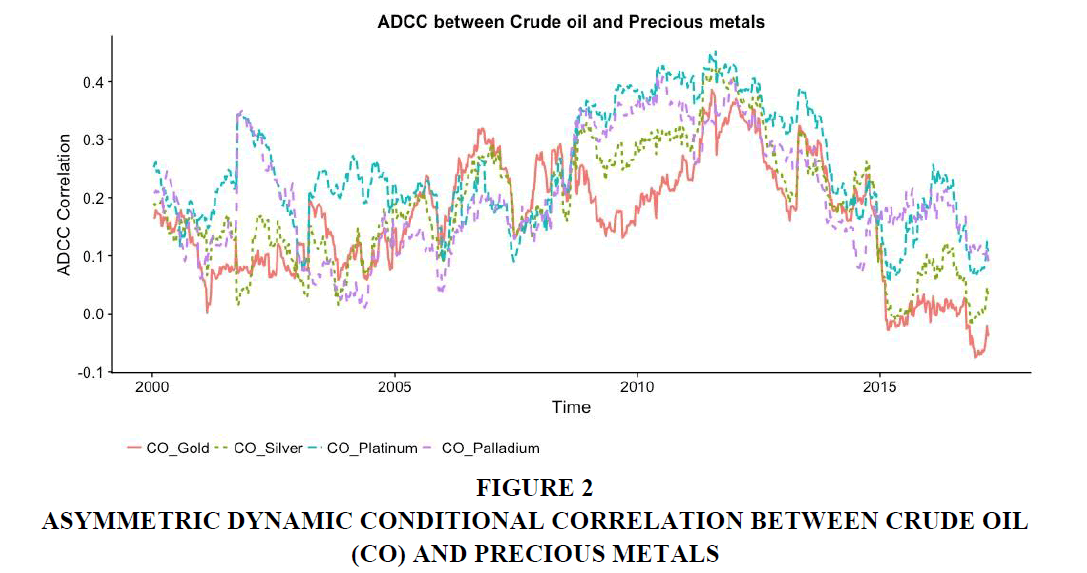 The results of this study show that a portfolio of crude oil spot and precious metal spot can be built and precious metals can be used to hedge the investment in crude oil and vice versa. The high correlation between crude oil and precious metals during normal time periods, however, may create confusion to the average investor, but if examined appropriately, could be extremely useful during stressful events. Results also show that investors and oil importing countries can target precious metal other than gold, to hedge the investments in the crude oil market. Similarly, oil importing countries while designing reserve portfolio could also include silver, platinum and palladium rather than relying only on gold.