Demographical Variables and Entrepreneurial Disposition A Narrative Overview of Literature

Significant scholarship on the criticality of entrepreneurship to economic development exists. Policy makers have also accepted existing entrepreneurship and economic development theories in efforts to drive economic development reduce poverty, unemployment and increase wealth levels of the populations. In view of this, researches on the qualities and related predictors or antecedents that are related to the inclination of individuals to engage in entrepreneurial activities have been considered. The present study sought to pull together research studies on the demographical variables that affect entrepreneurial disposition. A narrative overview of literature anchored the study. The study found that most sections of the literature on predictors of entrepreneurial disposition have focused on personal attitudes, personality traits and qualities that increase the likelihood of an individual to engage in entrepreneurship. Gender has been the most prominent demographical variable that has received scholarship and it has been established that males seem to be more predisposed to engage in entrepreneurship than females, even though female entrepreneurship is on the rise. Studies on age have suggested that entrepreneurial predisposition seems to ascend among the younger age groups to a peak around middle age before it starts to decline. It appears that consideration of other demographical variables such as marital status, race and place of origin have not been adequately explored.

As noted by Tamizharasi and Panchanatham (2010) demographical variables can be used to explain or predict the latent entrepreneurial spirit of certain individuals. Demographical variables that have received earlier attention, include family background, previous working experience before start-up, socio-economic status, age, education level, birth order and so on (Tamizharasi & Panchanatham, 2010). According to Kerr et al. (2017) entrepreneurial activities were found to be more prevalent among men, younger people, non-minorities and immigrants. These suggest the influence of age, nationality and gender on entrepreneurship. Research, however, has failed to establish consistency in the nature of entrepreneurship across demographical variables owing to the existence of environmental-based variables. Even though there is greater recognition that a number of individual variables affect level of entrepreneurship, it appears that much focus has been put to personality traits (Frese & Gielnik, 2014), education (Hynes et al., 2010) and entrepreneurial passion (Santos & Cardon, 2018) among other attributes. Research has taken the position that foundational variables such as age and race and culture tend to be associated with certain dispositions that influence entrepreneurship. Studies have, therefore, been attracted to the attitudes and dispositions that have a direct bearing on entrepreneurship as opposed to the base variables.

This study was formulated to interpret the literature on the variations on the influence of demographical variables on entrepreneurial disposition. As such the study was deemed to be associated with the interpretivist research paradigm. It was based on the construction of meaning from the research findings in the literature. It sought to construct meaning through the interpretation of the literature. Kivunja and Kuyini (2017) posit that the interpretivist is a based on the subjective analysis of human experiences. Creswell and Creswell (2018) agree that the interpretivist or social constructivist paradigm is based on the ontological view that individual seek to understand the world through interactions and experience. Following this position, this study was founded on the argument that an an analysis of the literature on demographical variables and entrepreneurial disposition can be used to create meaning for the changes in the phenomenon under study. Snyder (2019) comments that literature review research methodologies have become essential to address knowledge fragmentation and increase interdisciplinary comprehension of phenomena. In Green, Johnson and Adams’ (2006) discussion of literature reviews, narrative overviews are described as the comprehensive synthesis of previously published information. Such reviews are critical as they pull together knowledge fragments into a holistic interpretation of issues of interest. Ferreira, Reis and Miranda (2015) echo the same sentiments and mention that reviews are critical in providing a synthesis of published literature on a topic and also to point towards trends and the current state of knowledge on a particular phenomenon. Given the significant interest in entrepreneurship worldwide, a literature review was found to be the most suitable approach as it offers the stated advantages. It was noted that numerous studies exist on entrepreneurial intention in the literature thereby making a narrative overview essential to ensure knowledge on entrepreneurial intention remain condensed and focused for it to be useful in fostering economic growth through entrepreneurship.

Sources of Literature and Selection Criteria

As provided above, the nature of the study was based on the need to address the current fragmentation of knowledge on demographical variables and their influence on entrepreneurship against a background of observed phenomena shifts. Therefore, there was needed to make a literature study to create deeper understanding before providing a synopsis of the phenomena of interest. Electronic publications and databases were the sources of literature for the narrative overview. Publications were mainly obtained through Google Scholar searches as well as by accessing journals of entrepreneurship. The criteria for inclusion and exclusion of publications were based on the following conditions: (1) journals from which articles were selected were accredited to the Department of Higher Education (DHE) South Africa, (2) Key words or phrases for all selected articles were ‘entrepreneurial intention,’ ‘early stage entrepreneurship’ or ‘entrepreneurial disposition’. Figure 1 shows the procedure that was followed in writing the narrative overview of literature that is provided in this paper. 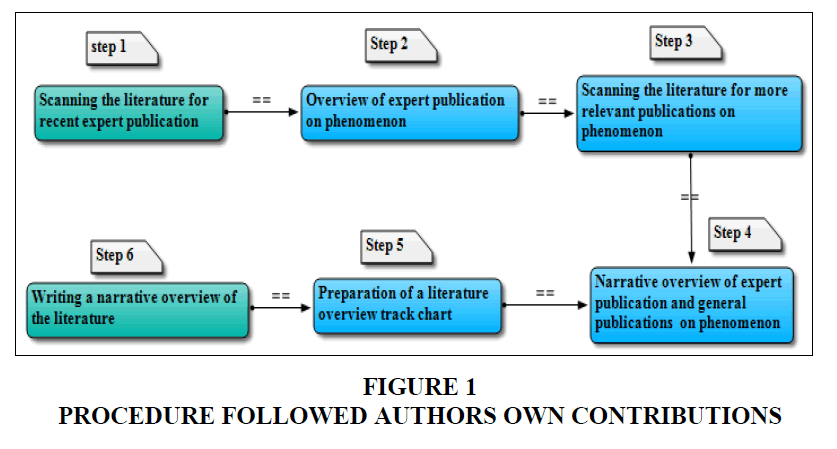 Figure 1 shows that the first step involved the scanning of the literature including the study of recent publications. At this study the literature was consulted widely in order to foster an in-depth appreciation of the area of study. The literature sources were not essentially from one journal but were simply selected following a purposive sampling approach where publications were required to meet the selection criteria stated previously. Some articles were categorised as expert articles while others were simply classified as general publications. In order for an article to be considered an ‘expert publication’ it had to be recent or it had to be the original work of a well-cited author whose work has received significant scholarly attention in entrepreneurship. The Global Entrepreneurship Monitor Report 2019/2020 was regarded as an expert article given its international recognition and the scale of its influence. Similarly, Robert Schumpeter’s (1934) publication was also considered an expert article. Other general articles were then searched from the databases and a narrative overview was provided with reference to both the expert articles and the general articles. A literature overview chart was designed to capture the main findings from various empirical findings. Table 1 is part of the literature overview chart, which was used to track the literature. The overview was stopped when it started to appear that there was some saturation on the literature position and no new arguments were emerging.

McClelland, D. (1965). Need of achievement and entrepreneurship: a longitudinal study. Journal of Personality and Social Psychology, 1(4), 389–392.

Ndofirepi, T.M., Rambe, P., & Dzansi, D.Y. (2018). An exploratory study on the gender-based differences in entrepreneurial intention and its antecedents amongst students of a South African University of Technology. South African Business Review, 12, 1-26.

Santos, S.C., & Cardon, M.S. (2018). What's Love Got to do With it? Team entrepreneurial passion and performance in new venture teams. Entrepreneurship Theory and Practice, 1–30.