Acceptance Sampling Plans are used to protect against the irregular degradation of levels of quality, the specifications of the new sampling plan using IPD (MSPIPD), gives a better sample size when compared with average sample number of existing distribution. For an acceptable quality level of 0.95, it is found that the new sampling plan based on IPD, gives a lesser sample size , and hence the inspection cost will be less. Tables are formulated for selection of parameters of the plan. The production process with interference parameter is taken into account, and the mixed sampling plans based on IPD turns out to be superior to the existing plan.

In the production process there is a chance of some interference, in such circumstance the suitable probability distribution for number of defectives is demonstrated by IPD, by obtaining an estimated value for interference parameter ’r’ the probability of acceptance can be calculated (Azarudheen & Veerakumari, 2017). The design of a mixed sampling plan in case of a one-sided upper specification u assuming that the standard deviation σ of the considered process characteristic is known, is specified by parameters (n1, n2, m, c, r), where c is assumed to be not equal to zero (Arul & Joyce, 2010).

If some intervention is made to the production process with the goal of improving product quality, the mean of the uncommon event p may change. In this case, IPD models the proper probability distribution for the number of defectives in the sample. An advantage of application of IPD based plans is that it provides information on how effective were the preventive measure taken, that is not applicable in poison distribution. When an intervention modifies the production process during sampling inspection MSPIPD plan enables a better sampling plan. The IPD based probability models are frequently utilized in a variety of applications, including reliability analysis, queuing issues, and epidemiological investigations.

Take a random sample of size n1 from the lot. If the sample average

then accept the lot. If the sample average

take a second sample of size n2. If the number of non-conforming items in the second sample is less than or equal to c, then accept the lot, otherwise reject the lot (Arul & Joyce, 2010).

The Average Sample Number is given by

Compute the acceptable limit as

Find the second stage sample of size 2 n from the relation:

The above equations cannot be solved analytically. Hence, the solutions are obtained by search procedure using programming in ‘R’.

Quality control engineers are continually looking for methods to improve product quality in order to increase customer happiness, thus they make improvements to the manufacturing process. Due to high tech technology, in production industry there are technical and scientific interventions. In that case MSPIPD plan may be applicable. Also in agriculture, medicine, food industry the MSPIPD plan can be applied as there are technical and scientific interventions (Table 1 and Table 2).

It is found that mixed sampling plans based on the IPD have better sharpness in the OC curves (Table 3, Figure 1 and Figure 2). 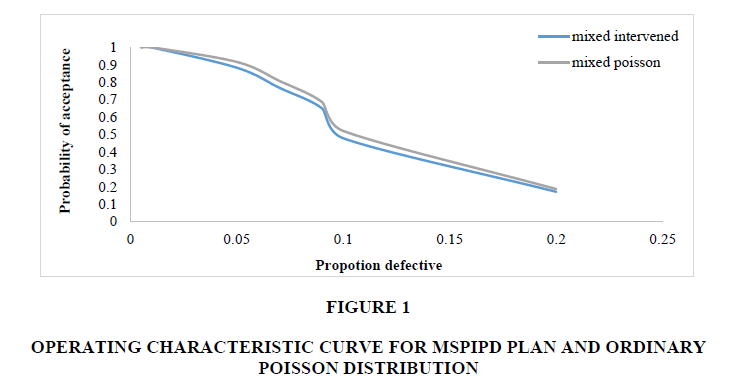 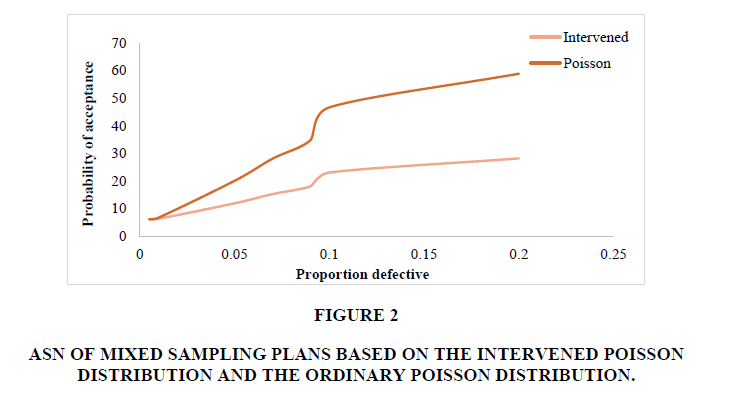 It is found that the average sample number (ASN) of mixed sampling plans based on IPD is smaller than the ASN based on the ordinary Poisson distribution.

Illustration Based on Application

Consider the production of high tech automobile manufacturing industry. In order to improve quality, the company is using 1% robots in manufacturing process. Let p1 = 0.01 be the fraction non-conforming corresponding to the AQL and acceptance number c = 2. Determine the parameters of MSPIPD plan with β = 0.9.

A good sampling will also protect the producer in the sense that lots produced at permissible levels of quality will have a good chance to be accepted by the plans. This paper provides contributions to MSPIPD plan, various properties of the proposed MSPIPD plans are derived and tables are provided for an easy selection of the plans. It is found that the mixed sampling plans based on IPD turn out to be superior with respect to the average sample number. The application of MSPIPD plan is explained with example.