Citation Information: Lee, J. (2019). Effect of risk-aversion on the operational decision under carbon cap and trade. Journal of Management Information and Decision Sciences, 22(3), 234-249.

The impact of carbon emissions on climate change has spurred a coordinated and global effort toward environmental quality through its reduction, while still striving to maintain and encourage economic development. The United Nations Intergovernmental Panel on Climate Change reported that the global concentration of greenhouse gases is the highest in the earth’s history and that the major cause of global warming is from the carbon dioxide emitted through human activity (Taso el al., 2017). Kyoto Protocol in Japan in 1997 and the United Nations Conference on Environment and Development in Brazil in 1992 were organized as a global effort and moreover an enforcement to reduce the concentration of greenhouse gas in the atmosphere (Taso el al., 2017). Even though there were doubts regarding whether those efforts would be adopted globally, they have changed both public- and private-sector's policies regarding reducing the carbon emission, and provides the potentials for trading the carbon emission internationally (Gottlieb, 2001).

The demand D for the product is assumed to have the cumulative distribution function, F(?) and probability density function f(?). Moreover, due to the intrinsic randomness in our model, a decision maker at the firm may experience the mismatch between the ordering quantity Q and demand D. So, if demand D is less than Q, Q-D amount of inventory is lost. A natural and meaningful assumption is that

for our model under carbon cap and trade regulation.

Then, we assume that the newsvendor is risk-averse over the final profit and the riskaversion is represented as a function u(?) which is increasing and concave. For practical reason, u is assumed to be trice differentiable. The objective function for the newsvendor is as follows:

In the following Lemma, we analyse the concavity of the newsvendor’s expected utility with risk-aversion.

1. The first-order condition for the newsvendor's objective function under the carbon cap and trade is as follows,

2. The strict risk-averse newsvendor's objective function under the carbon cap and trade has unique optimal solution.

Proof. For the first result, by the Leibniz's theorem, we have

Then, the first result holds. For the second result, we need to show that the second-order condition is strictly less than zero.

where the last inequality holds since

is an increasing concave function

Suppose that the newsvendor is risk-neutral over the final profit, that is

Then, the followings hold.

is the one satisfying the following equation

6. W does not affect

Proof. Since the newsvendor is risk-neutral over the final profit, that is

and the newsvendor’s objective is profit maximization,

for some positive constant K. Using Lemma 1, we have

Then, by rearranging this equation, the first result holds. Now, for second result, 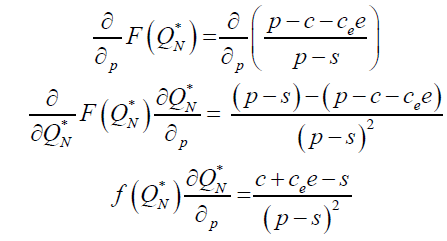 where the last inequality holds since 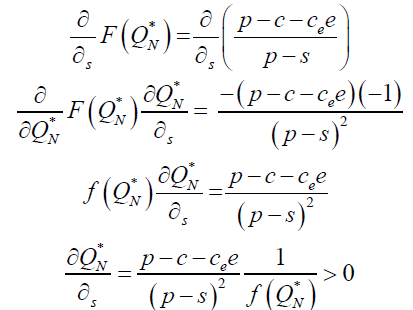 Where the last inequality holds since

. Then, the second result holds. For c in the third result, we need to show that 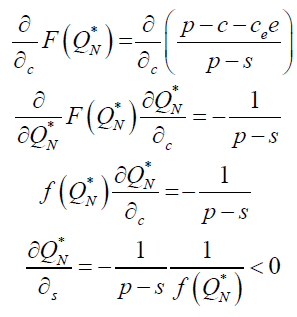 The last result holds easily since

Next, we will conduct a sensitivity analysis of parameters used in our model to see their impact on the optimal decision Q* through a comparative static analysis.

1. The risk-averse newsvendor’s optimal solution Q* is less that the risk-neutral one

2. The more risk-averse the newsvendor becomes, the lower the optimal quantity becomes.

Where the first inequality holds since

and the last equation holds due to (1). For the second result, we make the composition of two risk-averse function such as

and then compare it with u.

Where the inequality holds since

Suppose that the newsvendor is risk-averse. Then, as s increase, Q* increases.

Proof. The implicit function theorem is used for the proof as follows

,where the denominator is given by

As shown in Friend et al. (1975), most of experimental and empirical evidence for the risk-aversion is shown to be consistent with decreasing absolute risk aversion. A popular example of a decreasing absolute risk aversion utility function is u(?) = In(?). In the following Propositions, we find monotonic properties of the risk-averse newsvendor’s optimal decision with respect of parameters such as unit cost c, carbon emission per unit product e and carbon W except unit carbon trading price Ce.

Suppose that the newsvendor is risk-averse with a decreasing absolute risk aversion. Then,

3. the impact of p and Ce is indeterminate.

Which measures the risk aversion. Now, we need to see how the first-order of objective function moves at Q* with respect to c.

where the last inequality holds, since

Due to the newsvendor’s decreasing absolute risk aversion over the profit. The result for e holds by the same procedure as above. For W,

Where the last inequality holds same as the above. To see the impact of p, let’s see the following

can be positive or negative, the impact of ce is indeterminate.

A little bit different from monotonic properties for unit cost c, carbon emission per unit product e and carbon cap W in Proposition 3, the impact of unit selling price and unit carbon trading price do not show the monotonic behaviour like the risk-neutral case. For the indeterminate behaviour of the unit selling price on the optimal decision, simple example will be shown in the section of numerical example for the comparison with the risk-neutral utility case. This implies that risk-aversion significantly affects the optimal decision of newsvendor’s decision under the carbon cap and trade regulation.

In this section, we provide a numerical example to see the effect of risk aversion on the newsvendor's optimal decision under carbon cap and trade. We consider the following simple example of a risk-averse newsvendor whose utility function is 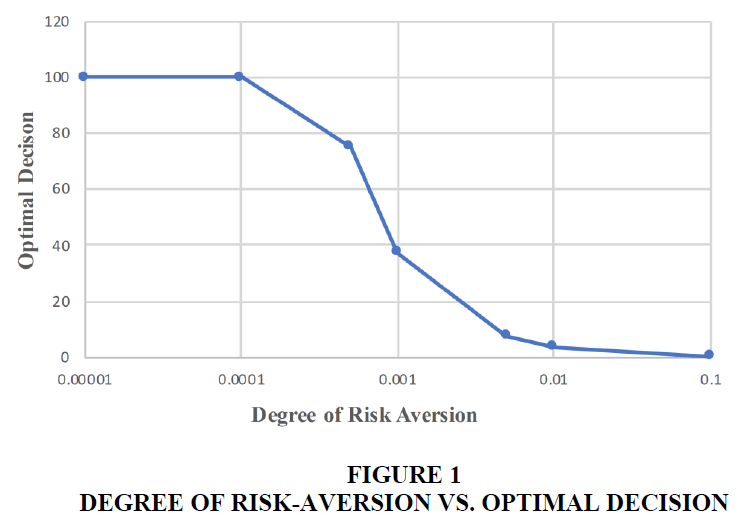 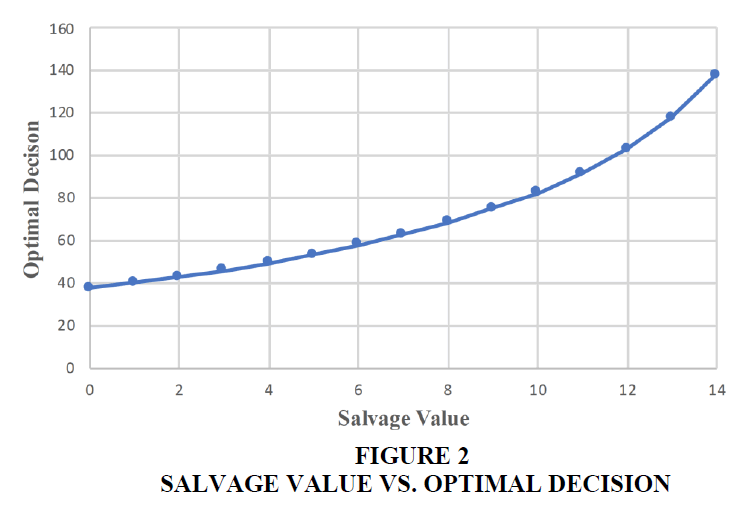 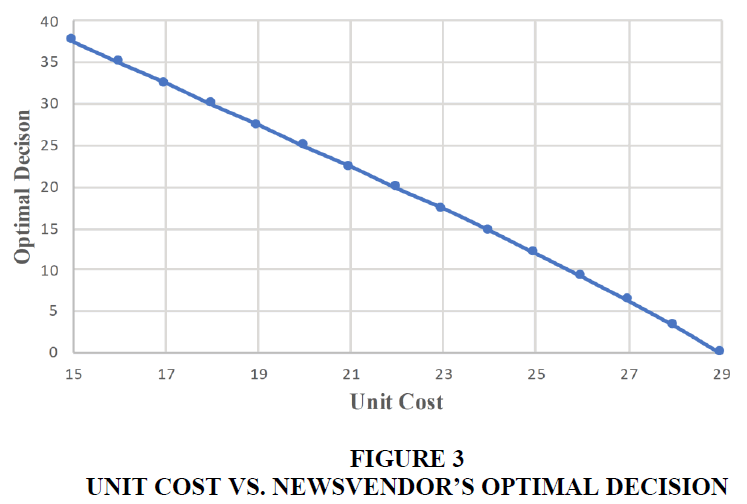 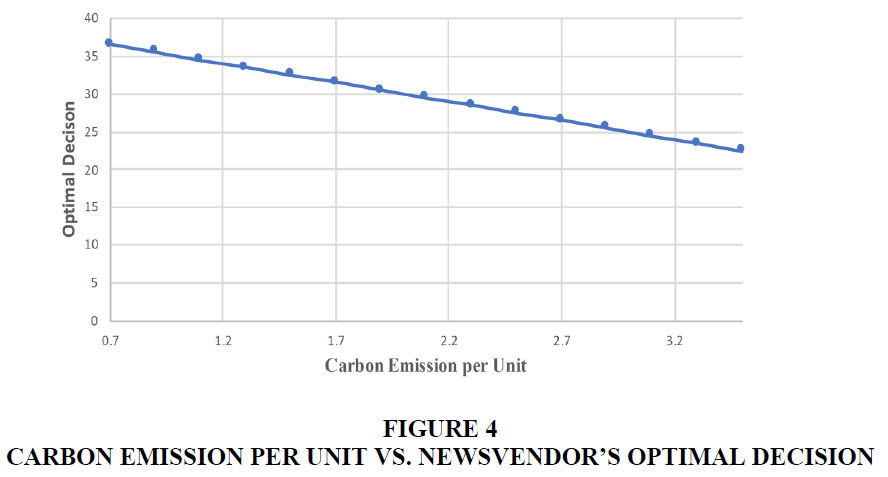 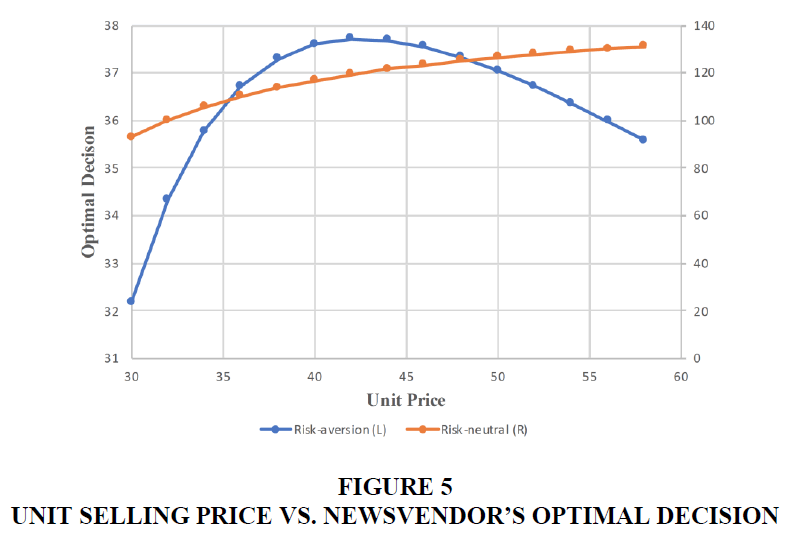 As described in the literature review, there is no research for an operational decision model which consider simultaneously customer’s uncertain demand, carbon cap and trade regulation and the decision maker’s risk-averse behaviour. A better understanding and then correct application of the decision maker’s risk-averse behaviour in real supply chain system lead to the discovery that traditional risk-neutral assumptions should be modified and that more practical operational model should be needed to correctly optimize supply chain system. So, the contribution of this paper mainly comes from the consideration of the carbon cap and trade and decision maker’s behaviour for the risk through the firm's operational decision process. Even though production and operations management with the carbon emission has been recently studied in some literatures (Zheng et al., 2016, Yuan et al., 2018, An et al., 2018, Lee et al., 2018 and so on), the firm's risk-averse behaviour on the operational decision under the carbon cap and trade regulation has not been studied so far but in this paper. Moreover, we show that some of operational and carbon regulation parameters in the risk-averse operation significantly affects the optimal decision under the carbon cap and trade regulation which is different from the risk-neutral case. As seen in the result of this study, the operational decision depends monotonically on the decision maker’s behavior on the risk. This result can be applied to the practical supply chain system in which there are suppliers wither producing and selling the product or providing raw materials to the newsvendor (retailer or manufacturer) under the carbon cap and trade regulation. In this supply chain system, the supplier can make a better production decision or inventory decision for materials by observing the newsvendor’s (retailer’s or manufacturer’s) behavior on the risk. If the newsvendor’s perceived behavior on the risk from the past ordering history to the supplier is higher, then the supplier would maintain lower inventory level compared to the traditional risk-neutral condition which gives the supplier the chance to reduce the inventory or production cost. Otherwise, the supplier would maintain higher inventory which gives the supplier the chance to avoid the situation of stocking-out or lost-sales. Also, a result, in which the operational decision is shown to be a function of the carbon price in the carbon cap and trade market, can be used for the carbon emission policy maker such that the amount of carbon emission, which is the linear function of production, can be reduced through increasing carbon emission price by the policy maker.

The shortcomings in this study is that the model does not consider the supplier’s production or suppling capacity. Actually, we implicitly assumed that the supplier has infinity capacity. However, this can be extended for the finite capacity assumption. So, for the future study, we can consider the supplier’s capacity issue. Moreover, the following issue can be considered. In this current study, the carbon cap or allowance for the firm is assumed to be exogenously given and single newsvendor is considered to analyse her/his operational decision behaviour only. However, it can be extended such that multiple newsvendors are considered in the carbon market, and such that both the carbon cap and carbon emission price are allowed to be decision variables which should be decided by the policy maker before each risk-averse newsvendor makes operational decision. Then, it is possible to analyse the situation in which a policy maker makes an optimal carbon price and cap decision considering all remaining and exceeding carbon emission allowances subject to each risk-averse newsvendor's operational decision behaviour to minimize the total amount of carbon emission. This can construct the Stackelberg-type game model between the risk-averse newsvendor and the policy maker which can be an interesting but complicated model, which might be a complicated game-theoretic system.