Measuring and comparing economic performance in municipalities through efficiency remains a relevant topic in public management and are considered a key tool, something essential for policymakers' decisions (Inverno et al., 2018).

The assessment of municipal solid waste management efficiency has been one of the indicators to measure the level of urban governance (Nzeadibe & Anyadike, 2012). It can reflect the degree of urban ecological civilization (Eriksson et al., 2005) and is valuable for policy makers (Sharholy et al., 2008).

Municipal solid waste is produced by all activities and, although it is a problem of local origin, it has both local and global effects. Sustainable waste management requires the combination of skills and knowledge from physical sciences and engineering along with economics, ecology, human behavior, entrepreneurship and good governance (Halkos & Petrou, 2016). They are further defined as local waste generated by households, commercial and governmental enterprises. It includes packaging, food waste, food waste, grass clippings, clothing, paper, and other solid forms of waste, but does not include hazardous and infectious waste or sewage (Yukalang et al., 2018). Municipal waste management is a major contributor to several environmental and public health problems (Wang et al., 2000).

Poor performance of municipal solid waste management is associated with poor local public health (Yang et al., 2018). It can be seen that on average in the municipal sector, more resources than necessary are being spent on services delivered to citizens (Horst, 2007). High expenditures reduce the supply of public services (Prior, 2011) and a decrease in coverage.

According to Garcia (2019), Peru still presents problems of public cleanliness and every day there are more urban dwellers (75% of Peruvians live in cities). In 2018, the average amount of solid waste collected by municipalities nationwide amounted to 22 thousand 860 tons; registering 0.7 kg per inhabitant daily. The volume of waste produced in Peru is increasing; 10 years ago, it was 13 thousand T/day, and by 2018 it went to 22 thousand tons a day. The 83.2% of this waste is not properly disposed of, and its final destination is a landfill.

Likewise, the cities of the Puno region in total in 2019 produced 576.8 Tn/day of solid waste, and also report a gap of 65% of municipal waste collection service coverage according to the National Registry of Municipalities of 2019 in addition.

Municipal inefficiency would be related to high levels of corruption, low accountability, larger population size, per capita subsidies, when resources are oriented to administrative expenses, greater distance to the regional capital, greater dependence on the foncomun with respect to their own income, transfers from the canon resource (Abrate et al., 2014; Ayaviri & Quispe, 2011; Catalán & Ballve, 2009; Pacheco et al., 2013; Stastna & Gregor, 2011). Likewise, small municipalities are inefficient because they are unable to exploit economies of scale in the provision of public goods and services, thus the services offered are limited to the needs of the population (Inverno et al., 2018).

While efficiency would be associated with re-elected mayors, those who establish a high tax rate, citizen participation (Bianchini, 2010; Catalán & Ballve, 2009) and when local governments that include private operation in solid waste collection are more efficient (Ichinose et al., 2013). However, the inefficiency found is not entirely attributable to poor management (Balaguer et al., 2007).

On the other hand, public expenditure efficiency scores have a positive and significant correlation with economic growth in the region (Faisol, 2017). Meanwhile, fiscal decentralization can improve the efficiency of public service delivery (Alonso & Andrews, 2018; Sow & Razafimahefa, 2015).

Taking the considerations raised, the objective of the research is to analyze the efficiency of public spending on solid waste management in the municipalities of the Puno region in 2019 and identify the variables that are associated with efficiency scores.

The target population is the local governments of the Puno region, while the information to be used corresponds to the year 2019 from the National Registry of Municipalities-INEI and the Transparency Portal of the Ministry of Economy and Finance.

The efficiency of public spending can be measured as a difference between actual spending and the theoretically possible minimum spending that is sufficient to produce the same level of real output (Esanov, 2009). Data Envelopment Analysis is a non-parametric technique widely used for estimating efficiency in local government management (Horst, 2007).

DEA models can also be subdivided in terms of returns to scale by adding weight constraints, by which efficiency is analyzed on the input side, involving assessing how much the quantity of inputs can be proportionally reduced while maintaining the quantities of output, while efficiency on the output side allows assessing how much the output level can be increased while maintaining the quantity of inputs used (Catalán & Ballve, 2009; Charnes et al., 1978) originally proposed the measurement of DMU efficiency for constant returns to scale (CRS) where all DMU are operating at their optimal scale. Subsequently, Banker et al. (1984) introduced the variable returns to scale (VRS) efficiency measurement model that allows the efficiency to be broken down into technical and scale efficiencies in DEA. DEA is a method for measuring the efficiency of DMU (local government i) using linear programming techniques.

To estimate the determinants of efficiency, the Tobit model is used to incorporate values grouped in a limit value in the dependent variable, where the censored regression is appropriate for efficiency scores, because the dependent variable is observed only in a certain range. In the case of the research, it assumes as value below 0 and as value above 1 (Inverno et al., 2018; McDonald & Moffitt, 1980; Ruggiero, 2004). The Tobit model can use zero-valued data and continuous data (Afonso & Fernandes, 2008). The Tobit regression model for the article is:

Where θi, is the efficiency score of spending on the municipal waste collection service; Canon: is the resources of the canon; PL: solid waste management plan (dichotomous variable); Truck: operational collection truck; Denspob: population density; Frecojo: collection frequency; and Coverage: is the coverage of the service in the capital of the district.

Taking nine districts that produce the greatest amount of solid waste in the Puno region (Table 1), it can be seen that the city of Juliaca is the municipality that collects the most solid waste daily, Juliaca has accumulated an average of 239 metric tons of garbage per day. The accumulation of solid waste has generated unrest among the citizens because the municipality does not manage the sanitary landfill, not only in San Román, but also in other provinces such as Puno, Huancané and Azángaro.

In second place, the district capital that collected the most solid waste was Puno (103 tons), followed by the municipalities of Juli (31 tons), Ayaviri (30 tons) and Ilave (15 tons). 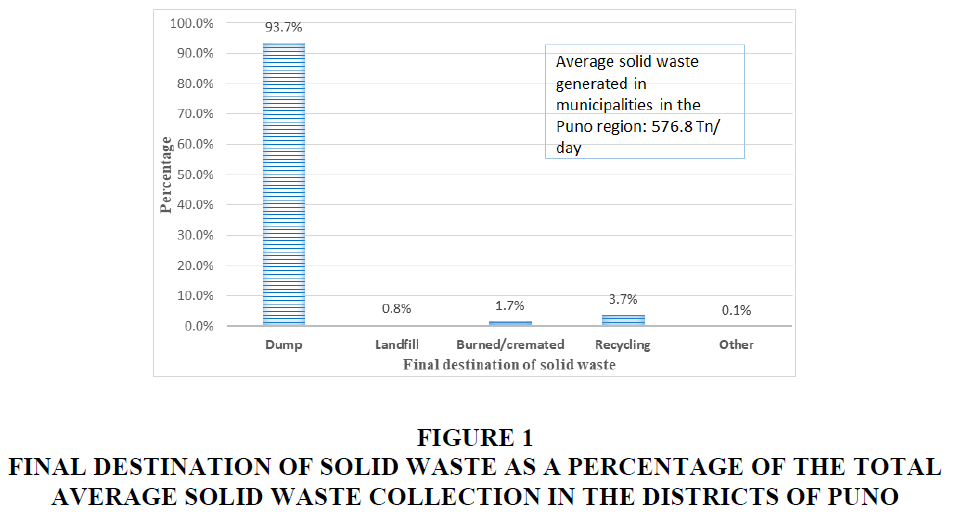 Burning or incineration is an obsolete and unsustainable method for dealing with solid waste, as it generates polluting emissions for health and the environment. It can be seen that every day 1.7% of solid waste collection is burned or incinerated, under the direct administration of local governments, mainly in the municipalities of Azángaro, Chucuito and Huancané.

The average efficiency score for municipalities in the Puno region was 0.18 (18%) according to the input-oriented DEA-CRS and DEA-VRS. Consequently, on average, municipalities in the Puno region could perform the collection service of one ton of solid waste per day with 82% less resources, i.e., with less than half (<50%) of their programmed budget.

Among the least efficient municipalities are Orurillo, Huancane, Putina and José Domingo Choquehuanca with indices of 0.037, 0.038, 0.042 and 0.043 successively according to the DEA-VRS; while the DEA-CRS results show the municipalities of Amantani, Calapuja Tinicachi and Paucarcolla as inefficient with indices of 0.002, 0.002, 0.007 and 0.008 successively. It should be noted that some municipalities with low efficiency indices show high population density, greater coverage or scope of solid waste collection and daily frequency of collection. These indicators would be associated with municipal efficiency, for example, the fact of having a greater coverage requires greater resources, and would be affecting the efficient use of allocated resources, which is corroborated later by means of a model. 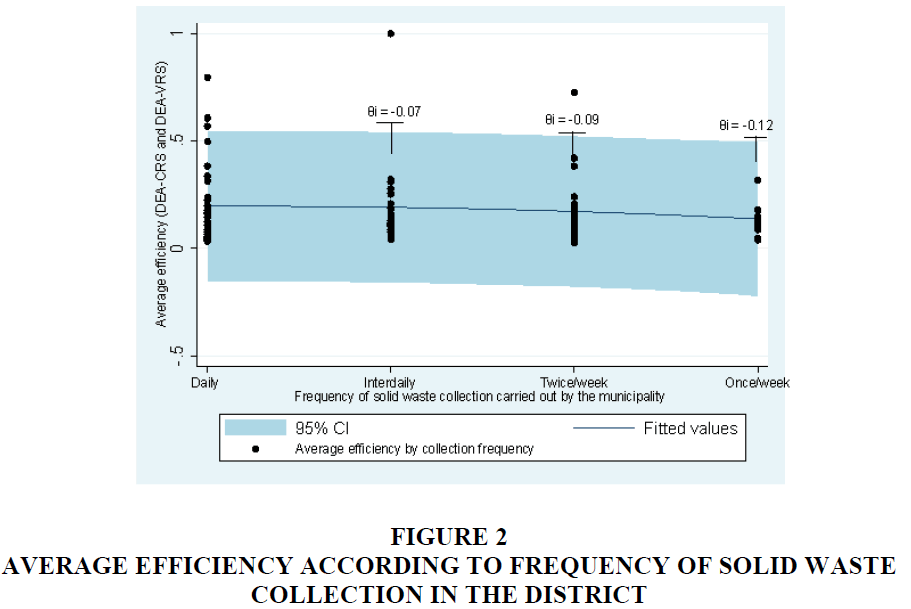 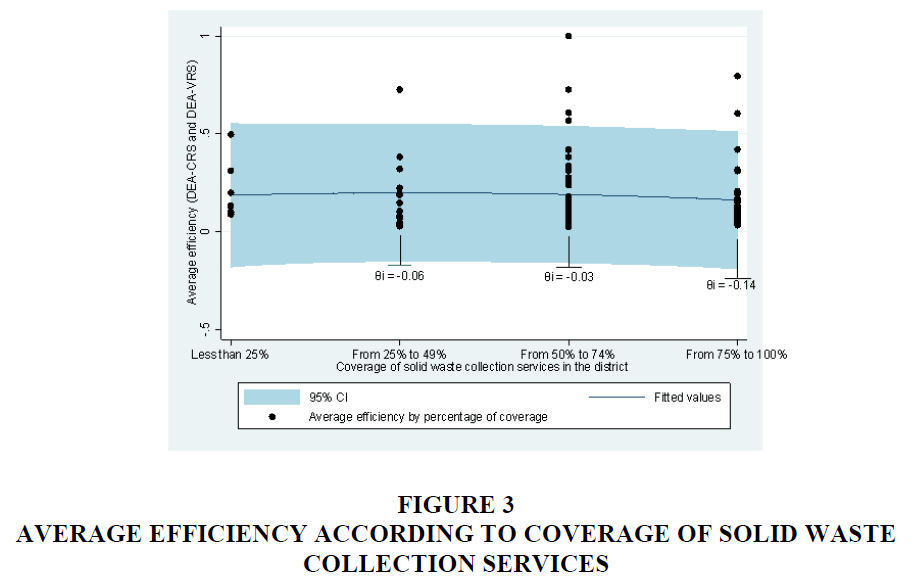 The results show that some municipalities do not necessarily require increases in transfers to improve solid waste management, because most municipalities could achieve, on average, the same level of production using fewer resources, improving performance without necessarily increasing municipal spending, as shown by Afonso and Fernandez (2005, 2006).

These results showed that there are several districts that have a high expenditure in the collection of a daily ton of solid waste but failed to achieve the maximum efficiency score, being the municipalities with the highest expenditure: Amantani, Calapuja, Tinicachi, Paucarcolla, Achaya and Pisacoma, which was verified in the efficiency of expenditure for the province of West Java-Indonesia (Inverno et al., 2018).

Likewise, the government has implemented budget program 0036 (integrated solid waste management), which specifically seeks to reduce the amount and hazardousness of uncontrolled solid waste disposed of in the environment, which should be disposed of in a sanitary landfill, but in most districts of Puno, there are only open dumps (93.7%). Therefore, the budget program 0036 is not achieving the specific results, one reason being the budget execution with an efficiency of 85% according to the Ministry of Economy and Finance.

Abrate et al. (2014) mentions that both corruption and a low level of voter information on managerial actions induce managers to reduce effort levels, thus contributing to reduced efficiency. The problem of corruption would not be alien to local governments, hence the inefficiency in municipal services.

On the other hand, the governments of the prefectures of Japan, according to the DEA-VRS and input-oriented DEA-CRS, obtained an efficiency score of 0.884; therefore, these cities are more efficient than the cities of the municipalities of the Puno region. It is interesting to analyze that solid waste in Japanese cities is not only collected by public operators, but also by private operators through contracting or licensing of waste collection, hence prefectures with greater participation of the private sector in solid waste collection are more efficient (Ichinoseet al., 2013).

The canon resources showed the decrease in the efficiency of spending on municipal waste management, this would prove the flypaper effect and fiscal laziness of canon transfers (Catalán & Ballve, 2009; Garcia, 2020; Vilca et al., 2020), because taxes are more efficient than transfers to finance the operating budget of municipalities (Arcelus et al., 2015). Moreover, the popularity of local authorities depends on the price collection of solid waste (Rogge & De Jaeger, 2013).

Comparing the results of the research with Flemish municipalities-Belgium, subsidies have a positive impact on the efficiency of basic public services, this finding is due to the strict supervision of subsidies in spending (Geys & Moesen, 2009). To mitigate the problem, the Comptroller of the Republic should exercise greater control over the use of these resources. Some studies went so far as to explain that public spending is not the main determinant of local government performance in environmental quality (Bianchini, 2010).

It has been seen that the collection truck favors the efficiency of solid waste collection expenditure, which proves that implementing new technologies can help manage waste more efficiently (Halkos & Petrou, 2016). There is evidence that some municipalities continue with waste collection with dump trucks, smaller vehicles and the non-operationalization of some collection trucks would be associated with inefficiency. Newer assets are likely to prove more efficient in the service delivery process (Arcelus et al., 2015)

The inefficiency of spending on municipal solid waste management in the Puno region is observed, so the municipalities in the Puno region could collect one ton of solid waste per day with 82% less resources, that is, with less than half of their programmed budget. Therefore, municipalities do not necessarily require increases in transfers to improve the efficiency of solid waste management, either in coverage or frequency of waste collection, because most municipalities could achieve the same level of production using fewer resources, and thus improve municipal performance without the need to increase the municipal budget. The most efficient municipalities were Juli, San José, Santa Lucia and Juliaca. Of the 576.8 tons of waste collected daily on average by the region's municipalities, 93.7% is disposed of in landfills, as most of the districts do not have a sanitary landfill.

It has been shown that municipal size is related to spending efficiency; the larger municipalities such as Juliaca, Juli and Ilave were indeed more efficient, with the exception of Puno, while efficiency was lower in the smaller municipalities.