The shift from trait and demographic perspectives has birthed the cognitive views on the impact of entrepreneurship education (Liñán, Rodríguez-Cohard & Rueda-Cantuche, 2011 and Wu, 2009). The cognitive literature argues that entrepreneurship education stimulates both entrepreneurial orientation and intention in individuals which makes them more malleable to behave or act entrepreneurially at various levels over time. However, FayoΙΙe, Gailly & Lassas-Clerc (2006) conceptions make it reasonable to assume that time lag allows other external factors play significant role in shaping or reshaping previously formed entrepreneurial intention and orientation of individuals.

Although empirical study showed that entrepreneurship education impacts on individuals’ intention, FayoΙΙe, Gailly & Lassas-Clerc (2006) maintains that it is highly uncertain this impact would be sustainable over time. In consonance with their uncertainty, FayoΙΙe, Gailly & Lassas-Clerc (2006) alluded to literature and empirical evidences by further asserting that young graduates’ orientation and intention towards entrepreneurship are also influenced by certain environmental factors. These factors have been vividly captured by Isenberg (2011b) as entrepreneurial ecosystem variables.

c) What ecosystem factors have inhibited or reinforced entrepreneurial intention and orientation? 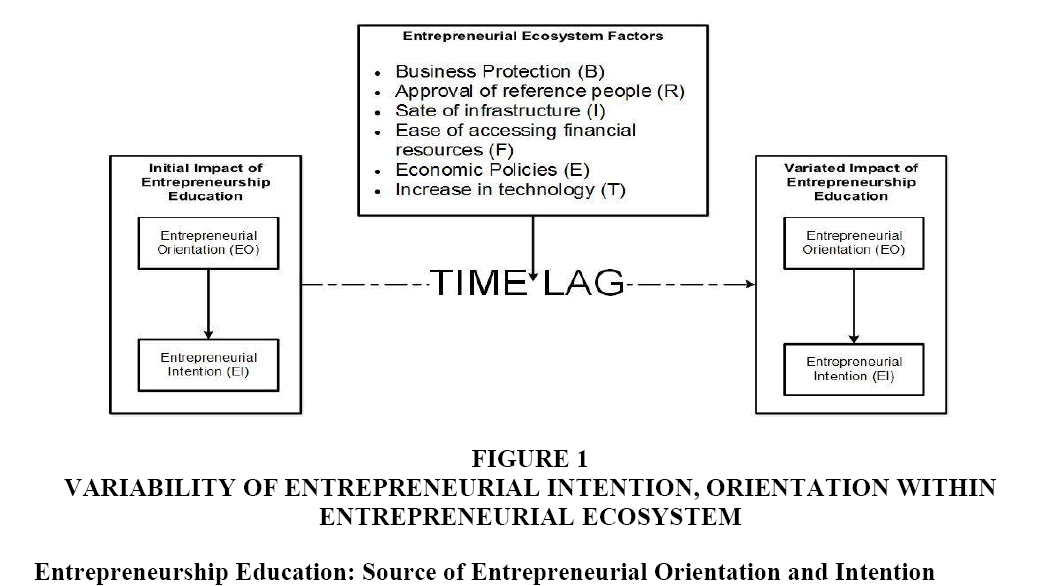 The globally held truism that entrepreneurship is the key to economic prosperity is adjudged a major cause of the sporadic proliferation of entrepreneurship programs (EEP) across the globe since 1990 (FayoΙΙe, Gailly & Lassas-Clerc, 2006; Kuratko, 2005; Liñán, Rodríguez-Cohard & Rueda-Cantuche, 2011; Mat, Maat & Mohd, 2015). The continued proliferation of EEPs may have been sustained on the logic that entrepreneurship education stimulates entrepreneurial orientation and intentions in individuals which increases their propensity to act or behave entrepreneurially over time (Debarliev et al., 2015; Donnellon, Ollila & Williams, 2014; FayoΙΙe and Toutain, 2013; Hattab, 2014; Ismail et al., 2015; Kirby & Ibrahim, 2011; Miranda, Chamorro-Mera, Rubio, 2017; Moberg, 2017).

Owing to time lag, it is plausible to contextualize the factors that variate entrepreneurial orientation and intention. These contextual factors, which could be social, political, economic and technological, are vividly captured as entrepreneurial ecosystems variables by Isenberg (2011a, 2011b, 2016). In this article, we conceptualize entrepreneurial ecosystem as uncontrolled exogenous variables which, through multi-dimensional interaction, act as inhibitors or facilitators to entrepreneurship within a given economy, territory or region (Isenberg, 2016; Kshetri, 2014; Mack and Mayer, 2016). Some of the variables include: physical and legal infrastructure; entrepreneurship-approving culture; financial services and resources; leadership; government institutions and regulatory policies; economic variables such tax and inflation indices; level of technology diffusion; support organizations and educational institutions (Mack and Mayer, 2016; Roundy, Brockman & Bradshaw, 2017).

For this study, six entrepreneurial ecosystem factors are considered: business protection in the country (B); approval of reference people like family members and friends (R); state of infrastructure that supports intention (I); ease of accessing financial resources to actualize initial entrepreneurial intention (F); friendly economic policies like tax decisions of government that support the pursuit of entrepreneurial intention (E); and increase in technology (T). These six factors represent the policy, culture, support, finance and market domains of Isenberg’s (2011a & 2011b) model.

The target population for this study includes all the graduates from a major Nigerian higher education institution who were undergoing their compulsory national service in a central state in Nigeria. The rationale for selecting this target population includes the fact that these graduates are drawn from all categories of institutions as well as from different parts of the country, representing a rich socio-cultural, economic and educational diversity. Furthermore, the population frame presents a crop of graduates who had undergone an entrepreneurship course with a time lag of 2 to 5 years. A third reason for selecting the population frame was that, the respondents in this population stand at a crucible of taking practical decisions and steps towards a career more than ever in their lifetime. This will determine how many of them are really keen of taking on entrepreneurial career.

Using the simple random technique, a total of 250 graduates was sampled through a simple random technique from a stream of graduates who were undergoing a one-year compulsory national service in a North Central Metropolitan city in Nigeria in 2016. Out of the completed and returned questionnaire, a total of 191 questionnaires through a process of data cleaning, were eventually considered valid for analysis.

A self-administered questionnaire was used to collect data. Respondents were duly briefed about the objectives of the study and informed consent was obtained before voluntarily participating in the study. For internal consistency reliability, the questionnaire was tested using the Split-half method. The split-half estimate computed via Cronbach’s alpha yielded a score of 0.874 which is acceptable (Gliem & Gliem, 2003).

The three major variables involved in this article namely: entrepreneurial orientation, intention and ecosystem factors were measured on a Likert Scale of 1–7. Entrepreneurial orientation was measured using elements such as disposition to risk, enthusiasm towards entrepreneurship and opportunity-seeking disposition (Wickramaratne, Kiminami, Yagi, 2014). Entrepreneurial intention was measured using dimensions such as intention to start business or take over a family business; intention to become an entrepreneur; intention to develop a business idea gained from entrepreneurship class (Rueda, Moriano & Liñan, 2015; Thompson, 2009 and Zhao, Seibert & Hills, 2005). Juxtaposing Isenberg’s (2011a, 2011b & 2016) model with Mason and Brown’s (2014) thoughts, this article used six dimensions as ecosystem factors. These include: business protection in the country (B); approval of reference people like family members and friends (R); state of infrastructure that supports intention (I); ease of accessing financial resources to actualize initial entrepreneurial intention (F); friendly economic policies like tax decisions of government that support the pursuit of entrepreneurial intention (E); and increase in technology (T).

To test the research hypotheses, two statistical tools were used. Firstly, the paired-sample t-test, a parametric test, was used for determining a significant statistical difference between the initial and current entrepreneurial orientations and intentions of graduates. The test was carried out via Statistical Package for Social Sciences (SPSS) version 24. As required, the data which were drawn from a random sample were normally distributed and excluded outliers (Hinkle, Wiersma & Jurs, 2003). Secondly, the structural equation model was used to measure the interaction among ecosystem factors and the dimensional causal effects they have on entrepreneurial intention and orientation of individuals (Kline, 2012). SPSS Amos version 24 was used develop the structural equation model. It was critical that the steps taken in performing a structural equation model fits the data (Cheung and Rensvold, 2002; Hooper, Coughlan & Mullen, 2008; Moss, 2009 and Wothke, 2010).

Within the theoretical postulations advanced by Isenberg (2011b & 2016) and Mason and Brown (2014), it was hypothesized that ecosystem factors interact in uncontrolled manners causing the entrepreneurial environment to be dynamic. To test this hypothesis as well as the subsequent one, a structural model was developed as earlier stated. In the structural model, six ecosystems factors that were examined include: business protection (B); approval of reference people (R); economic conditions (E); easy access to financial services (F); state of infrastructure (I); and increase in technology (T). All six factors were correlated to determine the nature and strength of interaction among. The results are presented in Table 3. The results show that all correlated ecosystems factors significantly interact in a positive manner except for infrastructure and reference people (r=0.096, p=0.187); increased in technology and easy access to financial services (r=0.123, p=0.093); and reference people and finance (r=0.138, p<0.059). These results demonstrate the fact the behaviour of a factor in an entrepreneurial ecosystem is not static and not the same towards every other factor. 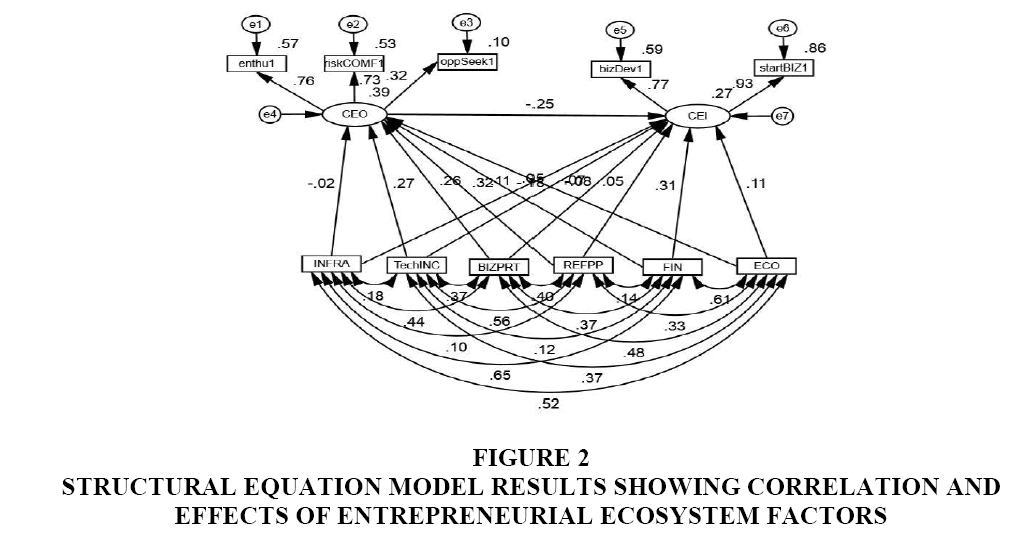 The results yielded interesting findings that support the three hypotheses as summarized in Table 5. From the analyses, it is evident that entrepreneurial intention and orientation ‘wane or wax’ strong over time. Furthermore, the variation in entrepreneurial orientation and intention is directly or indirectly attributable to the uncontrolled interaction among entrepreneurial ecosystem variables such as approval of reference people; increase in technology; business protection, etc.

It is pertinent to however, note that this study did not provide for techniques for overcoming the bias of feelings and memory retrieval that may have influenced the responses of participants, which formed the data used for analyses. On this note, it is recommended that further empirical studies in this field should develop methodological design that would elicit deeper reflections on entrepreneurial intention and orientation of individuals and how these have evolved over time. In summary, this research contributes to the theory of planned behaviour and particularly, the entrepreneurial ecosystem framework for complementing the impact of entrepreneurship education.

Ajzen, I. (1991). The theory of planned behaviour. Organizational Behaviour and Human Decision Processes, 50, 211.

Isenberg, D. (2011a). How to foment an entrepreneurial revolution. The Babsos Entrepreneurship Ecosystem Project, (781), 7.

Kirby, D.A. & Ibrahim, N. (2011). Entrepreneurship education and the creation of an enterprise culture: Provisional results from an experiment in Egypt. International Entrepreneurship and Management Journal, 7(2), 181-193.

Kshetri, N. (2014). Developing successful entrepreneurial ecosystems?: Lessons from a comparison of an Asian tiger and a Baltic tiger. Baltic Journal of Management, 9(3), 330-356.

Miranda, F.J., Chamorro-Mera, A. & Rubio, S. (2017). Academic entrepreneurship in Spanish universities: An analysis of the determinants of entrepreneurial intention. European Research on Management and Business Economics, 23(2), 113-122.

Moberg, K. (2014) Two approaches to entrepreneurship education: The different effects of education for and through entrepreneurship at the lower secondary level. International Journal of Management Education, 12(3), 512-528.