Exploring the Challenges and Success of Women Entrepreneurs in Pampanga Philippines

This research was undertaken to explore the challenges and success of women entrepreneurs in Pampanga, Philippines. The lessons they have learned in their respective areas can be used by other women entrepreneurs in the Philippines. The data were gathered through series of interviews which were examined and analysed through the application of Interpretative Phenomenological Analysis. Themes were identified showing the challenges and success as women entrepreneurs in the province of Pampanga such as financial difficulties, rivalry among entrepreneurs, conflict of schedule between family and business, high cost of technology, availability of imported goods at cheaper price, hard work, innovativeness, resourcefulness, risk-taking, passion in doing the business, purpose driven, networking abilities and patience. This qualitative research consists of realistic implications that are valuable to women entrepreneurs in other regions of the Philippines as well as to the future researchers. In cognizant of the limitations of this study, a research can be conducted expanding the scope to regional level given that Central Luzon is one region that has one of the highest concentrations of businesses in the country, alongside Manila and Cebu. It would also be good to benchmark whether the challenges faced by these women entrepreneurs would be similar to other regions such as those in Ilocos region, Visayas, and Mindanao. It is also recommended that succeeding studies must incorporate other entrepreneurial qualities sustaining women entrepreneurship that will influence government policy and other support services.

There is a high rate of entrepreneurship for many developing economies where unemployment and limited well-paying jobs are evident (Regnstrom, 2017). Entrepreneurship is a way of inspiring creative individuals to pursue opportunities despite its risks. It provides the solution by creating wealth, jobs, and social empowerment (Evangelista, 2013).

It has become imperative for business enterprises that involving women is a salient contribution to economic development. “Motherhood, lack of management experience, and traditional socialization were reasons for delayed entry into entrepreneurial careers of women. However, these women entrepreneurs reported that they started a business because of divorce, discrimination due to pregnancy, the health of a family member, or economic reasons such as layoff” (Jahanshahi et al., 2010).

As a case in point in Malaysia, women entrepreneurs are acknowledged to play an important role in the economic development of their families and society. However, a lot of obstacles limit them to perform their role such as poverty, unemployment, low household income and societal discriminations. To survive such obstacles, these women entrepreneurs have embarked on entrepreneurial activities to augment the income of their families (Ekpe, 2010). In the same manner that “Entrepreneurship in the Philippines is basically regarded as necessity especially for women that is in dire need for additional income. Needless to say that people become entrepreneurs in order to provide for one’s family” (Velasco, 2013).

Similarly, Kim & Ling (2001) believed that many women entrepreneurs in Singapore perform multiple roles in the family in addition to their careers. The family responsibilities include household chores and childcare which becomes an obstacle in managing their business. Maintenance of good marital relations and flexible work schedule are just some of solutions that women entrepreneurs must adopt to better manage their businesses. Malaya (2006) revealed that motivation to increase the interest of women in entrepreneurship are income, opportunities for advancement, self-fulfilment, independence, improving family’s source of livelihood, flexibility of time to better balance work and family responsibilities.

Financial support like start-up capital from the government is a vital factor that motivates women entrepreneurs to establish their own businesses. Women involvement in putting up their business provides job opportunities and perform important role in the development of national economy (Naser et al., 2009) while Rommi & Parrott (2008) recommended that media, educational policy makers and government agencies should collaborate together to provide access to business development services and network for women entrepreneurs.

In the study of Reyes (2017) revealed that “There are more women engage in entrepreneurship in Central Luzon, one of the islands in the Philippines, it was recommended that collaboration between the academic institutions, private sector, and government is imperative on promoting women entrepreneurship engaging in micro enterprises”.

1. What are the challenges experienced by women entrepreneurs in Pampanga?

2. What are the characteristics that contribute to the success of women entrepreneurs in Pampanga? 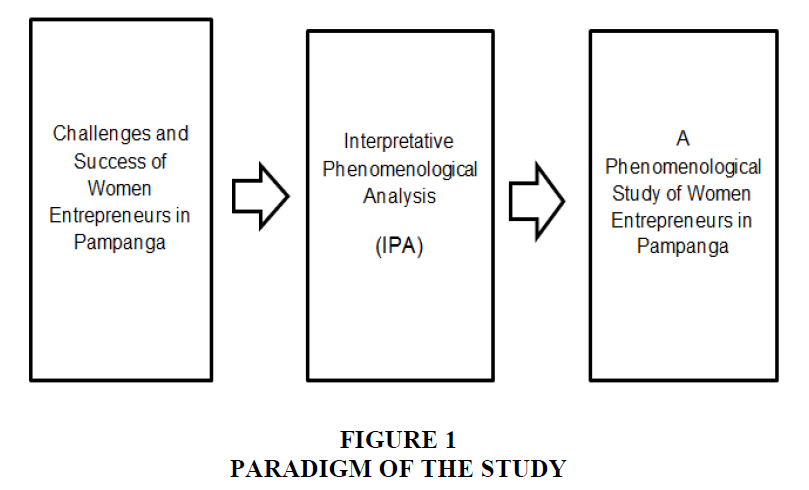 Figure 1:Paradigm Of The Study.

The researchers used an interview schedule that involved questions on survival and success as women entrepreneurs. Consent was presented to ensure the voluntary participation of all the participants, the agreement to the terms of the study, and confidentiality of information. The interview was done depending on the availability of the participants’ schedule. In most cases, the interviews were rescheduled several times from March 2018 to February 2019. In the analysis of data, the interpretative phenomenological analysis (Creswell, 2007) was used which data were clustered into meanings from significant statements into textual descriptions of themes.

Based on the findings of the phenomenological interpretation, thirteen (13) sub-themes were derived addressing the objectives of the study broadly categorized into two major themes; to wit:

Under this major theme, five sub-themes were formed on the challenges; namely: financial difficulties, rivalry among entrepreneurs, conflict of schedule between family and business, high cost of technology, and availability of imported goods at cheaper price. These themes have been identified as the challenges being experienced by these women entrepreneurs in Pampanga. For the financial difficulties, the participants were hesitant to borrow capital from the financial institutions due to stern requirements and high interest rate. While on the conflict of schedule between family and business, most of these women entrepreneurs established their business to help their family augment income, hence, prioritizing family can make the business suffer. High cost of technology, rivalry among entrepreneurs and availability of imported goods at cheaper price were able to manage by the participants because of the assistance provided by the government such as free usage of technology by the Department of Science and Technology and free seminars available for the micro, small and medium enterprises conducted by the Department of Trade and Industry. Jahanshahi et al. (2010) revealed that “It was not easy for women entrepreneurs to succeed in business. They had to face a lot of challenges to become successful in their ventures. They had to deal with discrimination, endure the scepticism of society, and also exert more effort than men entrepreneurs to prove their worth to others.” Despite those challenges experienced, these women entrepreneurs were able to deal with problems and endure their businesses for more than 10 years.

The women entrepreneurs were persistent to pursue their respective businesses despite the challenges being experienced. There were able to develop the ability to perform many tasks simultaneously. “Women engaged in entrepreneurship are generally product of their initiatives whom the vast majority are poor. These are women who tend to cope with the difficulties of personal life while improving their socio-economic situation” (Bouzekraoui & Ferhane, 2017).

Success of these Women Entrepreneurs

Eight (8) sub-themes were formed under this major theme denoting success. These women entrepreneurs possess common characteristics such as hardwork, innovativeness, resourcefulness, risk-taking, passion in doing the business, purpose driven, networking abilities and patience. These were the reasons why these women entrepreneurs have been in their respective businesses for more than 10 years. They believe that being hardworking; innovative; resourceful; risk taker; having passion in doing the business; network abilities and patience; and being a purpose driven entrepreneur helped them face every adversity and developed resiliency to endure the challenges being a woman entrepreneur. These women entrepreneurs cannot just easily give up with the problems and difficulties in managing their businesses. According to Jahanshahi et al. (2010), “Women entrepreneurs tend to be highly motivated and self-directed. The business owners’ characteristics include creativity in doing things, risk-taking propensity, high energy level, interpersonal skills, competence in finance, and in handling relationships with their stakeholders.”

Reyes (2016) revealed that “The resiliency character of these women entrepreneurs in Pampanga helped them survive with the various challenges at hand. The business support organizations can offer help by making programs available free of charge not just for women but also to all micro, small and medium enterprises in the region.”

In support of these women entrepreneurs, they can join in the business mentoring program conducted by Go Negosyo and Department of Trade and Industry. As disclosed by Bouzekraoui & Ferhane (2017), “Women who are economically active but have limited know-how and training are those women whom entrepreneurship does not appear as a choice, but rather a necessity in response to an economic survival. They are women in a precarious situation whose low incomes serve the satisfaction of basic family needs.”

Ntiamoah et al. (2016) believe that “The significant role of Small and Medium Enterprises (SMEs) can be realized if there are meaningful government policies helping them gain access to capital, technology improvement, quality improvement, skill development and access to both domestic and international markets.”

Given the limitations of this study, a similar research can be conducted expanding the scope to Central Luzon alongside Manila and Cebu. It would also be good to benchmark whether the challenges faced by these women entrepreneurs would be similar to other regions such as those in Ilocos region, Visayas, and Mindanao.

Ekpe, I. (2010). The effect of microfinance factors on women entrepreneurs’ performance in Nigeria: A conceptual framework. International Journal of Business and Social Science, 1(2), 255–263.

Evangelista, R.P. (2013). Entrepreneurship in the Philippines: Opportunities and challenges for inclusive growth. Center for International Private Enterprises. Retrieved from https://www.cipe.org/resources/entrepreneurship-philippines-opportunities-challenges-inclusive-growth/

Regnstrom, A. (2017). Making the Philippines an archipelago for entrepreneurs. Retrieved from https://www.manilatimes.net/2017/12/02/business/columnists-business/making-philippines-archipelago-entrepreneurs/366187/

Reyes, J.C. (2016). The women behind the enterprises in Pampanga: A phenomenological study of Kapampangan women entrepreneurs in Pampanga. HAU Business Journal, 8, 43-68.