Financial Inclusion in India: A Giant Structure on Weak Foundation

Since independence, financial inclusion is an important policy matter in India. Recently Government of India has taken several impressive policy initiatives in this domain. To assess the effectiveness of these policy initiatives, several issues of concerns seek immediate attention for intellectual debate in the researchers and practitioners’ community. Are the institutional structures responsible for financial inclusion efficient enough to achieve the desired goal? Are the boundaries of functions of various institutions defined clearly? Are the citizens of India capable enough to participate in these new schemes? Can we measure the success by merely counting the numbers of participation? Should we not also consider the quality of the usages of financial instruments as a broader frame of reference? Ignorance to answer all these questions can lead us towards an unsuccessful future.

The ‘finance’ can be uniquely considered as a quasi-public good due to its nature of the improvements in value of financial systems and ability to make monetary policy more effective enhancing non-inflationary growth with the increase in financial networks (Kelkar, 2010). Thus, financial inclusion can help in reducing the financial risks of citizens of India to a great extent.

The challenges in financial inclusion can be analyzed from both supply side and demand side perspectives. Financial inclusion has two elements such as ‘access to suitable products and services’ (i.e. the ‘supply side’) based on a portfolio of financial products offered by several institutions, and ‘good financial decision-making’ (i.e. the ‘demand side’ of the equation) based on ‘financial literacy’ (i.e. ‘a basic understanding of financial concepts’) and ‘financial capability’ (i.e. ‘the ability and motivation to plan finances, seek out information and advice, and apply these to personal circumstances’) (Mitton, 2008).

Challenges in Supply Side

The committee on financial sector reforms, Planning Commission, Government of India (2009) categorized the access to financial services in three ways such as ‘contingency planning’ (retirement savings, buffer savings and insurable contingencies), ‘credit facilities’ (business livelihood, emergency loans, housing loans and consumption loans) and ‘wealth creation’ (savings and investments) (2009). A comparative study of the roles of different institutions with respect to these three dimensions can reveal valuable insights. Major barriers at the supply side can be identified as the operating costs such as salaries to staffs, travelling expenses, commissions, amortization and depreciation, rent on hired buildings and other overheads etc (Sharma, 2009).

Roles of reserve bank of India and banks

Reserve Bank of India is the central bank and regulatory body of banking industry that provides financial services with emphasizes on credit flow to priority sector and Micro Small and Medium Enterprises. There is a large gap between the number of potential and actual clients with the banking system and banking system does not have the capacity to cater the future demand (Srinivasan, 2007). Recent initiatives are also trying to improve the conditions by introducing schemes such as Pradhan Mantri Jan Dhan Yojana (PMJDJ). PMJDJ provides the opportunity to citizens of India to open zero balance bank accounts with debit cards. In addition to providing basic banking accounts, recently government of India announced to facilitate a universal accident insurance scheme named ‘Pradhan Mantri Suraksha Bima Yojana’ connected to all accounts in the banks.

Due to the reduction in lending to small and poor borrowers in rural areas, microfinance institutions emerge as alternate institutions that recognize the business potential of poor (Kelkar, 2010). Though microcredit is a potential tool to fight poverty, the concept is founded only on a few successful cases through over-advertisement and specialized expertise is required to control any potential opportunistic behaviours (Bebczuk, 2008).

Based on the common norms, values, geographies, socio-economic backgrounds, culture, people of a self-help group can support each other as a group. Though innovative ideas such as NABARD’s self-help group-bank linkage model and Bangladesh Gramin Bank model are successfully implemented, the fundamental nature of the self-help group as selfsustained mechanism or only carrier of subsidies, is a matter of debate (Dev 2006).

The 1,39,182 branches of post offices out of total network of 1,54,882 branches (as on 31.03.2014) can offer various financial services such as savings accounts, life insurance, mutual funds, forex services based on the trust in different socio-political backgrounds (Midgley, 2005). Due to the emergence of post offices as competitors to traditional banks in the retail financial markets, the cooperation between banks and post officer is reducing (Midgley, 2005). Post offices can leverage the strategic advantages of their connectivity to the poor people at the remote locations in India (Sarma, 2008).

The high usage of internet banking, phone banking and mobile banking makes the role of telecom authorities very vital in nature. According to the press release No.39/2015 of Telecom Regulatory Authority of India, the total number of subscribers of wireless telephone in India is 975.78 Million as on 31st May 2015. Telephones have the potentialities to provide financial services in unbanked locations (Klein & Mayer, 2011). In their study on African countries, Andrianaivo & Kpodar (2011) showed that indicators of financial inclusion such as number of deposits or loans per head is positively related to the ICT penetration indicators such as mobile and fixed telephone penetration rates and the cost of calls.

The objective of Insurance Regulatory and Development Authority is to mitigate the risk by promoting various insurance opportunities to citizens of India.

Challenges in Demand Side

Considering the fact that around 51 per cent of the farmer households are financially excluded, instead of focusing only on credits, institutions can undertake credit plus advisory services (Dev, 2006).

The contribution of informal sector in economy is around 93%. Kelkar in his article mentioned that according to National Sample Survey (2007), out of 89 million farm households in our country, more than 40 million households have no access to finance, whether formal or informal (2010). Corporate sector is also contributing through the initiatives such as the ITC e-choupal, Godrej Adhar, Mahindra Shublabh, HLL Shakthi, to improve the conditions of informal sector by bringing them in the financial system (Srinivasan, 2007). Srinivasan also rightly criticised the policies of banks on imposing restriction in number of transactions or hidden costs in small accounts (2007).

Framework of Institutions and Demands

Various institutions are serving different needs of various groups at the demand side. The main focus of them are approximately as per the below figure. Different institutions are offering same products competing with each other to meet the demands and capture the markets Figure 1. 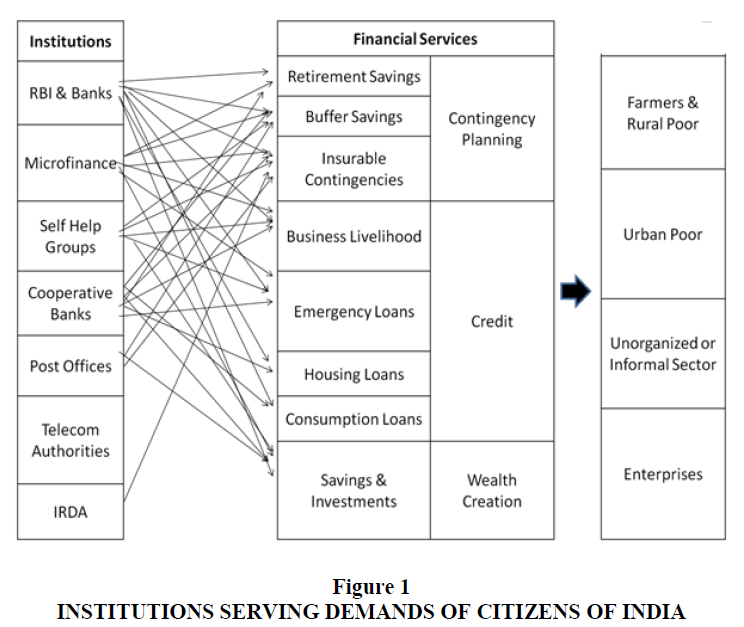 All authors contributed equally. All authors have read and agreed to the published version of the manuscript.

This research received no external funding. Conflicts of Interest: The authors declare no conflict of interest.

Mitton L. (2008). Financial inclusion in the UK: Review of policy and practice, published by the Joseph Rowntree Foundation.