The primary purpose of the study is to forecast the exchange rate of Indian Rupees against the US Dollar by combining the three univariate time series models i.e., ARMA/ARIMA, exponential smoothing model, Naïve and one non-linear multivariate model i.e., NARDL. For this purpose, the authors choose the monthly data of exchange rate and macro-economic fundamentals i.e., trade balance, federal reserves, money supply, GDP, inflation rate and interest rate over the period from January 2011 to December 2020. The data from January 2020 to December 2020 are held back for the purpose of in-sample forecasting. By applying all the models individually and combinedly, the NARDL model out performs other individual and combined models with the least MAPE value of 0.6653. It is the evidence that the Indian Rupee may forecast through non-linear analysis of macroeconomic fundamentals rather than single univariate models. The findings will be beneficial for the policy makers, FOREX market, traders, tourists and other financial markets.

Johri& Miller (2012) reported that India has confronted two devaluations of the rupee since its independence one is in 1966 and the other is in1991. Initially, the government of India could not borrow money because of the low saving rate. Also, the trade deficit of India was beginning in 1950 which continued in the 1960s. Moreover, the balance of payment problem started in 1985 and ends up in 1990. India had a fixed exchange rate in 1991, due to high inflation the government of India devalues the rupee in 1999. Between 2000 and 2007 the Indian rupee reached 39 Indian national rupees per the United States dollars which are recorded high. The rupee depreciated in early 2013 due to stagnant reforms and depleting foreign investment. The Indian rupee has fallen by nearly 10 rupees against the dollar in 2018 which is one of the poorest plunged. Therefore, the forecasting exchange rate of the Indian rupee is projected to go long way for better policy (Khalid, 2008).

The dynamics of the rupee play a significant role in the currency market. Therefore, the correct prediction of the exchange rate is crucial for investment and business purposes. Forecasting can be the formal procedure of making expectations by using the economic concept, mathematics, statistics, and econometric analysis. The exchange rate has an implicit forecast of the variable in question when there are expectations for future economic variables. The rational expectations theory describes as that individuals form expectations of exchange rate future values and other variables in the similar model that the “true” model of the economy creates these variables. In our time's forecasting is very becoming more common and needed. Individuals consider forecasting when they make economic decisions. These decisions then affect the course in which the economy will continue. The expected value of the exchange rates affects the cash flows of all international transactions; consequently, forecasting exchange rate activities is very significant for businesses, investors, and policymakers (Kallianiotis, 2013).

Khashei et al. (2009) reported that a single Non-linear model is not enough to capture all dynamics of time series. However, nowadays there is no consensus on the technique superiority precision in forecasting. Therefore, to predict, the study used combinations of forecast techniques derived from individual models, Poon & Granger, (2003) suggested that many models gauge the upcoming trend of the exchange rate however combination forecasting in this area is a research priority. Therefore, to fill the gap the study applied univariate forecasting techniques & the Non-Linear Auto Regressive Distributive Lag model. The research considered combinations of forecasting methods for exchange rates. The next section of the paper discussed the literature review on the forecasting exchange rate of the Indian rupee and renowned techniques that have been used in literature. The third section of the research explains the Data & Methodology. The data is collected monthly of the Indian Rupee's Exchange rate against United States Dollars from the first month of 2011 to the last month of 2019. The study used to estimate the time series’ future values, the ARIMA, Naïve, Exponential Smoothing, Non-Linear Autoregressive Distributed Lag, and Combination of the Technique. The fourth section incorporates results and discussion. Lastly, the paper concludes.

Accurate forecasting has a fundamental importance in the economic domain. Thus, in past few years, many types of research are going on forecasting. For improving the accuracy of time series modeling and forecasting different important models have been anticipated in the literature (Adhikari, 2013). Among these models, Autoregressive Integrated Moving Average (ARIMA) is the most popular and frequently used stochastic time series model [Box &Jenkins (1970); Zhang (2007); & Cochrane (1997)]. This model is implemented on the assumption that the time series is linear and follows a normal distribution. Autoregressive (AR), Moving Average (MA) & Autoregressive Moving Average (ARMA) models are the subclass of the ARIMA model (Box & Jenkins, 1970; Hipel & McLeod, 1994). Besides, the seasonal forecasting Seasonal ARIMA (SARIMA) introduced by Box and Jenkins (1970) is the variation of ARIMA (Hamzacebi, 2008). ARIMA model is famous due to the time series varieties and Box-Jenkins methodology (Hamzacebi, 2008; Zhang, 2003). But in many practical situations, the pre-assumed linear form with time series becomes the limitation of these models. To avoid this problem many non-linear stochastic models are used in the literature (Zhang, 2003; Altavilla & De Grauwe, 2010).

Now, artificial neural networks (ANNs) have gained attention for time series forecasting (Kihoro et al., 2004). Initially, ANNs were inspired by the biologist but later increased attention in time series forecasting (Kamruzzaman & Sarker, 2006). When ANNs are applied to time series forecasting problems, it has not presumed statistical distribution and its excellent feature is their inherent capability of non-linear modeling. The model is adopted based on given data and this feature makes ANNs self-adaptive and data-driven (Zhang et al., 1998). A substantial amount of work on the application of neural networks for time series modeling and forecasting has been carried out in the past few years. In literature, numerous ANNs forecasting models are used, like Feed Forward Network (FNN), multi-layer perceptrons (MLPs), Time Lagged Neural Network (TLNN), Seasonal Artificial Neural Network (SANN), etc. MLPs are the most common and popular, characterized by a layer of FNN (Zhang, 2003; Borhan & Hossain, 2011).

Due to continuous research work, numerous other existing neural network structures are in the literature. Vapnik developed the support vector machine (SVM) concept in 1995 which is the breakthrough in the area of time series forecasting (Suykens & Vandewalle, 1999). SVM initially solve classification problems but later used in estimation, regression, and time series forecasting (Cao & Tay, 2003). SVM methodology becomes popular in time series forecasting due to good classification and better generalization of data. However, the main purpose of SVM is to practice the structural risk minimization (SRM) principle to identify a good generalization capacity rule (Cao & Tay, 2003). The solution to a specific issue in SVM depends on the training data point (Vapnik, 1998). The solution obtains from SVM is unique from traditional stochastic or neural network methods because the training is equal to resolving a linearly constrained quadratic optimization problem (Cao &Tay, 2003). Another feature of SVM, nevertheless the dimension of the input space, the solution of can be independently controlled (Suykens & Vandewalle, 2000; Amat et al., 2018).

Due to extensive application in previous literature, three univariate time series models have been selected for the analysis i.e., ARMA/ARIMA, Exponential smoothing & Naïve however the multivariate non-linear model i.e., NARDL has been selected as fourth model. It will be an addition in the literature of finance as NARDL have never been employed for the purpose of forecasting the exchange rate or combined with other time series models.

Table 2 describes the unit root results of dependent and explanatory variables. Testing the stationary of time series is essential and compulsion before the analysis because if the time series isn’t stationary then the findings will be invalid as it will not portray the true findings. For this purpose, the authors run ADF test and PP test to check the unit root of all variables. The results concludes that all variables has been stationary at level or at 1st difference according to the Augmented Dickey-Fuller and Phillip Peron test which satisfies the assumption of univairate and multivariate time series analysis. It is noticeable that if any variable is not stationary at level or 1st difference then we cannot run NARDL model but in this study, all variables have been stationary without integrating the second difference.

Table 3 describes the results of univariate time series models i.e., ARIMA and Exponential Smoothing Model. As we know that the exchange rate time series has been stationary at the 1st difference as indicated in the table 1 therefore the authors run the ARIMA model for the purpose of forecasting. The results concludes that ARIMA (4,1,3) is the best fitted model in the context of forecasting exchange rate with the highest r-squared and low Akaike and Schwarz info criterion which provides the values of 0.024882, 3.662279 and 3.762197 respectively (Asadullah, 2017; Ince & Trafalis, 2006).

In exponential smoothing results, there isn’t any trend observe as suggested by the analysis. The alpha has the maximum value i.e., 1.0000 however other parameters shows the null value. The maximum value of alpha predicts that the impact of historical values on the future trend of exchange rate time series will die out quickly however the null values of other parameters propose that the impact of recent observations or estimations or historical values on the upcoming observations are insignificant (Nouri et al., 2011).

Table 4 illustrates the results of long run coefficients resulted from NARDL analysis. The results shows that the bound test value is 4.377914 which lies between the upper and lower bound values i.e., 3.35 and 2.62 respectively. The R-squared value i.e., 0.986932 depicts that the total 98.69 percent variation in exchange rate has been described by the chosen explanatory variables in the model. Furthermore, the F-statistics result i.e. 164.7804 reveals that the model is fit for the analysis (Moosa, 2000).

It is important to fulfill all assumptions or pre-requisites of any statistical tool before analysis to validate the findings therefore the authors run the diagnostic tests for this purpose. In diagnostic tests, the Breusch-Godfrey LM Test, Harvey Heteroskedasticity Harvey test and REST Ramsey test provide the insignificant results which indicates that there isn’t any issue of serial correlation or heteroskedasticity in the data and there isn’t any issue of omitted variables therefore we can conclude that the model is fit for the analysis.

Table 5 reveals the accuracy of individual and combined models in the context of forecasting exchange rate of Indian Rupee against the US Dollar. In comparing the individual models, the NARDL model outperforms all other models with the least MAPE value i.e., 0.6653. The Naïve and ARIMA model stands at second and third position with a very minor difference of MAPE values. The MAPE values of Naïve and ARIMA models are 1.6454 and 1.6762 respectively. The Exponential smoothing models MAPE value shows the result of 4.504 score which is the highest among other individual models but still its MAPE value is less than 5 percent (Maria & Eva, 2011). 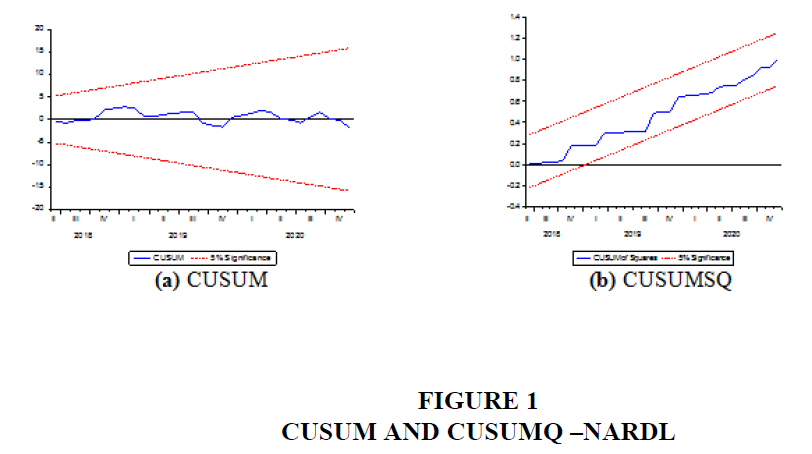 The primary purpose of the study is to forecast the exchange rate of Indian Rupees against the US Dollar by combining the three univariate time series models i.e., ARMA/ARIMA, exponential smoothing model, Naïve and one non-linear multivariate model i.e., NARDL. By applying all the models individually and combinedly, the NARDL model out performs other individual and combined models with the least MAPE value of 0.6653. It is the evidence that the Indian Rupee may forecast through non-linear analysis of macro-economic fundamentals rather than single univariate models. It is also found that some combined models provide better forecasting than the individual models as suggested by the (Poon & Granger, 2001). Measured by the Tobin's Q formula.