Gender Differences in Entrepreneurship of People with Disabilities1

Data on women and disability in Spain manifest the double discrimination which affects women due to their own condition and the fact of presenting some kind of disability. This situation of vulnerability is especially evident in the labour field, in general, and in self-employment or entrepreneurship, in particular. Basing on a survey conducted on this collective concerning this issue, this article inquires about the differences in entrepreneurial activity among people with disabilities in relation to gender. The results show the lower propensity of women to start up a business in comparison to men. According to such data, differential aspects in entrepreneurial motivation and in the factors that inhibit such activity are also identified.

According to data from ODISMET (2018), labour participation of disabled women in 2017, measured through their activity rate, is significantly lower (35%) than that of non-disabled women (71.8%). Also the employment rate of that collective is the lowest (25.6%) in comparison to the rest of groups (men with and without disabilities and women without disabilities). As it was reasonable to espect, their unemployment rate is in fact highest one of all previous groups (26.7%) and their working conditions are also the worst: high temporariness (90.3%) and low gross annual salary, not only less than that of women without disabilities (the difference is almost of three thousand euros) but also less than that of men with disabilities (the difference is slightly more than three thousand euros). This conditions place women in a situation of greater social vulnerability, as indicated according to their poverty risk rate, which among these women is higher than that of women in general (30.7%). In this context, entrepreneurship can be interpreted as a suitable employment opportunity for a group with limitations to access the labour market. However, data show that this is not the case. In 2016 there are 55.400 disabled people working on their own account, which is equivalent to a self-employment rate of 12%, practically 5 points less than the self-employment rate of people without disabilities (16.7%). The vast majority (69.1%) are self-employed without employees. Concerning gender, men have a greater predisposition towards self-employment (66.6%) than women (33.7%) and there is practically no difference (34.6%) between them and entrepreneurs without disabilities. Therefore, there is no inequality between women with and without disabilities, but between men and women, what leads to the establishment of differences in entrepreneurship based on gender.

There is a lot of literature on the gap between the development of the professional career of women and men at work (Martínez et al., 2007). There is also a big amount of reasons for this unequal position. Social factors, such as role assignment in relation to gender, are responsible for such a gap (Ortiz & Cosimi, 2017). In addition to those factors, we also have to take into account educational differences (Brush & Hisrich, 1988, Fischer et al., 1993, Minniti et al., 2005), professional experience (Shabbir & Di Gregorio, 1996, Catley & Hamilton, 1998) and the motivation to create a company (Valencia, 2010). Generally speaking, the literature notes that the majority motivation for the creation of companies among women is opportunity instead of need (Kourilsky & Walstad, 1998, Manolova et al., 2007).

This is also the case of Spain, where entrepreneurship in the case of women–beyond the motives that are strictly related to economic and employment issues–acquires a social meaning, wich refers to the claim to addresses to two aspects, namely greater independence and status (Valencia, 2010). There is a connection between the last aspect and the perception of entrepreneurial skills, which are in problem area with a solid theoretical background thanks to research studies, among which it is worth mentioning that of Ventura & Quero (2013). Such research study is on factors explaining the intention of women to launch an entrepreneurial initiative and reveals significant competency aspects of female entrepreneurship, such as the following: result assessment; self-confidence; family history; social capital and the intention to launch a business.

Also, in terms of competence, those researches of Langowitz & Morgan (2003) and Langowitz & Minnitti (2007), manifest that while factors why men tend to start a business are related to opportunity, financing or the desire to eliminate professional frustration, women tend to start a business because of a precarious work situation or because of difficulties in accessing a job, that is, tend to start a business out of necessity. In terms of competence, those conducted by Olaz & Ortiz (2018), Ortiz & Olaz (2016) and Ortiz et al., (2017), which are based on the competency classification of the Emotional Competence Inventory (ECI-2005), cannot be ignored for they bring the study on the competences that determine female entrepreneurship to a deeper level. Their results show some differences in entrepreneurship due to gender linked competence factors of a psychological nature, namely their greatest weakness in terms of leadership.

Following these researches, this article analyses how these singularities are manifest in the case of women entrepreneurs with some type of disability.

This article conducts an analyse of a survey on a sample of residents in Spain with physical, sensory and organic disabilities and of its results. The study took place between November and December 2018 and its technical sheet is referenced in the Article of Barba-Sánchez, published in this review. It was carried out within the framework of the Project "Disability and entrepreneurship. Competence analysis" (CSO2016-75818-R), funded by the National R+D+I-Plan, and developed by the University of Murcia.

The research objective of this article is to characterise entrepreneurial activity and reasons that move residents in Spain with physical, sensory and organic disabilities to develop or not a business as such entrepreneurship is put in relation to gender. In order to achieve this, gender of the respondent has been considered an independent variable. The dependent variables are: performance of an entrepreneurial activity; factors which hinder entrepreneurship such confidence; training; professional experience; economic resources; business profitability; the stimuli of the immediate environment, institutional support; the type of activity; ownership of the business; age; size of the company according to the number of employees; motivations for entrepreneurship and, last but not least, those elements that encourage to give up a business and withdraw entrepreneurship. A descriptive analysis has been developed to determine which factors moderate empreneurship in this collective. For the statistical analysis of this article, different techniques, such as Pearson´s Chi-squared test, Likelihood Ratio and Linear by linear Association, have been used.

Results in relation to the fact of starting up an entrepreneurial activity indicate that 16.9% of men and 14% of women have launched a business (Figure 1). Other than men, women don´t start a business so oft and, in addition to that, they have a lower entrepreneurial intention. In fact, 41.4% affirm "neither having started up a business nor having the intention to do so", while in the case of men it is 23.9%. The percentage of abandonment of business activity in the case of men is 33.8%, while in the case of women it is 22.4%, what, on one hand, represents identical percentage to that of those women who indicate having the intention to launch a business, but, on the other hand, such percentage is three points lower than that of men (25.4%). 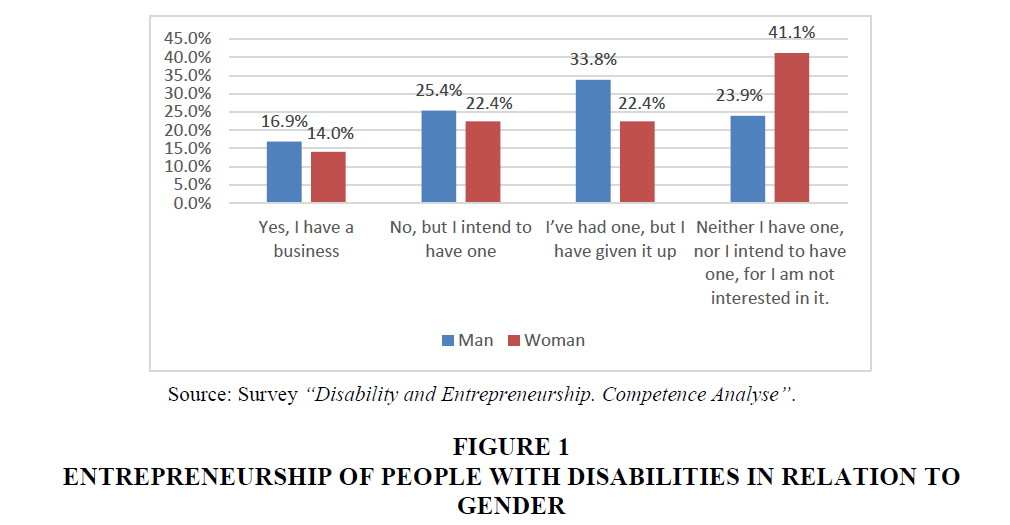 Figure 1:Entrepreneurship Of People With Disabilities In Relation To Gender.

Also the importance given to those reasons that hinder or inhibit entrepreneurship are different for men and women. Taking as reference the degree of importance of each aspect which may hamper entrepreneurship according to their average value (1=Nothing, 5=A lot), the results indicate that the most important reason for women not to start a business is lack of economic resources (the average value of such reason is 3.98), while for men such a reason would occupy second place in order of importance (its average value being 4.20). For men, their uncertainty about business profitability (average value of 4.27) has placed first

Such a reason is in third place for women (average value of 3.59), who consider more important in order not to start a business the lack of institutional support (average 3.73). However, for men, this reason is in fourth place (the statistical significance, measured using Pearson’s Chi-squared test, results in a value of 0.03). Finally, neither men nor women attach too much importance to the fact of not having family support, lack of training or lack of self-confidence, the latter reason, which obtains the lowest assessment in both genders (values of Chi-square has been in the last two cases of 0.01 and 0.05 respectively).

Mainly, entrepreneurial initiative is developed out of necessity, especially in women (57.1%), with a distance of seven points in comparison to this same reason in the case of men. On the other hand, opportunity is the reason for 38.9% of men and 36.5% of women.

This results are consistent with the main reason for people with disabilities to start a business activity, namely to increase their personal income (33.3% of women and 35.2% of men); followed by the need to achieve greater personal independence, which is more important for women (30.2%) than for men (29.6%). to achieve a personal challenge as reason to develop an entrepreneurial initiative, with practically similar percentages in both cases occupies third place.

Regardless of sex, the main reason for leaving a business is its lack of profitability. Nevertheless, the percentage of women who indicate such reason (49.2%) is slightly higher than that of men (46.3%).

The Company and its Characteristics

Depending on the main business activity of the company, there is no great difference between men and women. Although it is the services sector that prevails in both cases, the percentage of women who develop an activity related to this sector (81.8%) is higher than that of men (73.1%). This relationship is reversed when it comes to industry, where the distribution percentages are favourable to men (26.9%) companies compared to women (18.8%).

Gender does not make any significant difference in relation to ownership and management of the company, neither in the case of those who state that its property is "individual" nor in the case of those who indicate that it is "shared", then, both cases are represented by equal percentages for women as well as for men. However, in the latter case, this perception is more frequent among women (46.2%) than among men (40%).

Considering the company‘s seniority, we observe that the majority of projects are in the implementation phase. However, 35% of companies managed by women are more than 42 months old, so we observe that entrepreneurship is consolidated. In relation to size, it is mostly self-employment, especially among women (71.8% are businesswomen without employees).

The most important gender-based differences in entrepreneurship are found in the different extent to which the entrepreneurial indicative is started up, as well as in motivation to launch a company, rather than in the company itself and its characteristics, where there are no substantial disparities between men and women in relation to ownership, size, age, or type of activity.

As for the propensity to launch a company or the intention to do so, note that it is lower among women than among men being need, other than opportunity, what motivationates an entrepreneurial initiative to be developed. Such a conclusion confirms the research studies on this subject of Langowitz and Morgan (2003) and Langowitz and Minnitti (2007).

Finally, among the factors which hinder entrepreneurship, economic reasons, such as lack of resources, have a remarkable influence, especially on women. In agreement with the same findings of other works on this issue, this fact indicates a possible vulnerability of companies managed by women regarding competitiveness. As a matter of a fact, this is problem area on which to continue researching in future studies.

ODISMET. (2018). The situation of people with disabilities in the labor market. Fundación ONCE: Madrid.

Olaz, A., & Ortiz, P. (2018). Causes and factors of entrepreneurship of people with disabilities. A competency analysis through the nominal group technique. Navarra: Aranzadi.

Shabbir, A., & Di Gregorio, S. (1996). An examination of the relationship between women's personal goals and structural factors influencing their decision to start a business: The case of Pakistan. Journal of Business Venturing, 11(6), 507-529.

Ventura, R., & Quero, M.J. (2013). Explanatory factors of the intention to undertake in women. Differential aspects in the university population according to the gender variable. Cuadernos de Gestión, 13(1), 135-155.