Investigating the Impact of Agriculture on Economic Growth in BRICS: Does Financial Development Matter?

Background of the Study

Consistent with United Nations (2017), agriculture is one of the most important sectors that anchor economic growth and development in developing countries, Africa and low to middle income countries. The paper went on to say that agriculture enhance economic growth through providing employment to the poor, poverty reduction as the food from agriculture feeds the poor, provides income to the rural poor as they can sell the agricultural produce, provides inputs to the industry therefore promoting industrialization in the economy as a whole, generates foreign currency when the farm produce is sold in international agricultural markets and reduces demand for foreign currency to buy food from other countries. Theoretical and empirical literature is also unanimous on the positive that agriculture plays in the economy. There is consensus in the literature, in support of the United Nations (2017)’s arguments.

On the other hand, authors such as Shahbaz et al., (2013) and Zakaria et al., (2019) argued that agriculture’s influence on economic growth on its own is limited. The provision of finance and or removal of credit access constraints to the farmers are a critical step towards ensuring that agriculture plays its significant positive role in the economy. Chisasa (2014) whose study focused on South Africa concurred with such an argument. Empirical research on the role of financial development on agriculture’s role in the economy is very scant. The few researchers who have done it like Chisasa (2014) and Shahbaz et al., (2013) focused on single country analysis. Zakaria et al., (2019) focused on South Asia. In fact, none of agriculture-finance-growth nexus the author is aware of focused on BRICS. It means the BRICS story regarding agriculture, growth and financial development remains untold. Their empirical researches were also too narrow in their definition of financial development. Unlike prior related similar research, this study captures both stock market and banking sector development.

Contribution of the Study

Although the literature on the positive role played by agricultural production seems to show consensus, there is no study the author is aware of that exclusively focused on the factors that should be in place to enable agriculture to enhance its positive influence on economic growth. Literature also unequivocally agrees that financial development enhances economic growth but no study to the best of the author’s knowledge has so far investigated if financial development is a channel through which agricultural sector can enhance economic growth. In fact, majority of prior empirical studies on agricultural production-growth nexus wrongly assumed that the two variables are linearly related. The ignored the fact that economic growth is positively influenced by its own lag, consistent with Rahman et al., (2019). They also did not consider the endogeneity problem associated with an economic growth function (that explanatory variables of economic growth also affect each other). Majority of the existing studies on agriculture-growth nexus were on developing countries or African continent. Neither of them to the author’s best knowledge used BRICS as a unit of analysis. All these gaps were filled in this study.

Structure of the Paper

Section 2 is the theoretical literature discussion on the impact of agriculture on economic growth whilst Section 3 is the empirical literature which focuses on role of agriculture on economic growth. Section 4 discusses the influence of financial management on agricultural production whereas Section 5 describes the finance-led growth hypothesis. The explanatory variables of economic growth variable from a theory intuition point of view are discussed in Section 6. Section 7 describes the research methodological framework of the study. General model specification, data and its sources and the econometric model specification are the three aspects discussed in this section. Section 8 is the data analysis, results discussion and interpretation. Aspects discussed in this section include pre-estimation diagnostics such as correlation and trend analysis, panel unit root tests, panel co-integration tests, results presentation and interpretation. Section 9 concludes the paper.

There are three theoretical rationales describing the impact of agriculture on economic growth, as discussed below.

Consistent with Johnston and Mellor (1961), the positive contribution towards the economy is more pronounced during the early stages of growth not only through providing employment and food but also through helping to establish consumption and production linkages in the economy. An increase in agricultural productivity increases income levels among rural households, which in turn pushes up the demand of industrial products produced locally (Suryahadi et al., 2006). On the other hand, an increase in agricultural productivity enhances the sector’s ability to supply more inputs to other sectors of the economy hence creating jobs not only for the agricultural sector but to the entire economy as a whole. Mozumbar (2012) also noted that agricultural productivity directly contributes towards gross domestic product of the country.

Equation 1 is an economic growth function, whose selection of variables was mainly influenced by Susilastuti (2018), Awan & Alam (2015), Tahamipour & Mahmoudi (2018), among others.

Data and its Sources

Figures 1 and 2 respectively shows GDP per capita and agricultural production trends for BRICS countries during the period from 1996 to 2018. 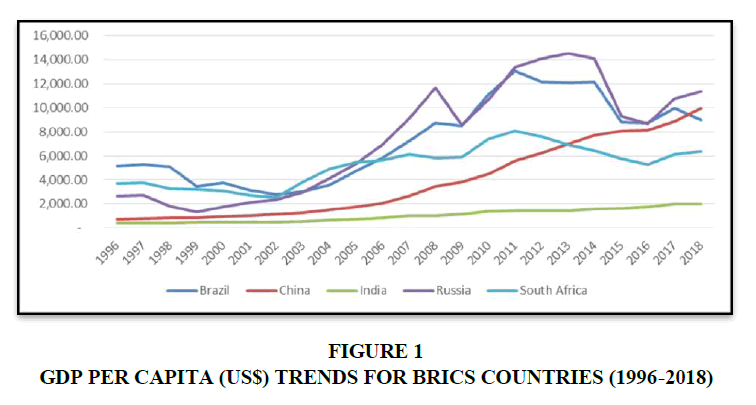 In Table 3, it is evident that all the variables were stationary at first difference. This is what Odhiambo (2014) referred to as integrated of order 1.

Kao (1999) integration tests were used to investigate whether a long run relationship existed between and among the used variables in the study (see results in Table 4).

Where DCF is domestic credit by financial sector (% of GDP), DPC represents domestic private credit (% of GDP), SMC is stock market capitalization (% of GDP), ST stands for stock turnover ratio (% of GDP) whilst VT represents value traded ratio (% of GDP). As supported by Guisan (2014) and Odhiambo (2014), the variables used were found to be co-integrated regardless of the measure of financial development variable employed. The results pave way for the dynamic GMM tests to be done.

The dynamic GMM results of the economic growth function are presented in Table 5.

Across all the five models, agricultural production was found to have had a significant positive effect on economic growth. The results resonate with authors such as D’Haese et al., (2013), whose studies argued that agriculture positively influence economic growth through providing employment, foreign currency, ensures food security and pushes up gross domestic product of the country, provides inputs to the industry and other sectors of the economy.

Financial development was also found to have a significant positive influence on economic growth across all the five models, consistent with Schumpeter (1911), McKinnon (1973), Townsend (1983), Shaw (1973) and Goldmith (1969) whose studies all concurred that financial development is an engine through which economic growth takes place. They argued that financial markets are efficient in the allocation of financial resources needed by the production sector of the economy, mobilize savings and investment and design and implement financial risk management strategies for the key players in the economy.

Consistent with Romer (1986), FDI had a significant positive effect on economic growth across all the five models in BRICS group of nations. The impact of remittances on economic growth was found to be mixed, in line with available literature (Sutradhar 2020) on remittances-led growth hypothesis. Inflation had a deleterious influence on economic growth, in agreement with Mallik & Chowdhury (2001).

Matahir, H. (2012). The empirical investigation of the nexus between agricultural and industrial sectors in Malaysia. International Journal of Business and Social Sciences, 3(8), 225-231.