Investigating the impact of considering complementary assets on the feasibility of enterprise resource planning system: Case study on financial organisation in Saudi Arabia

Replacing the Enterprise resource planning (ERP) system instead the legacy system increased clearly during the last years in Saudi Arabia. This complicated and expensive system is targeted to increase the productivity and ROI for the user organisation. The success of this system in the organisation need preparing the suitable environment. This paper propose to investigate the impact of complementary assets including the organisational, management and technical assets as independent variables on the feasibility and success of using this integrated system as dependent variable in Saudi context. The study will focus on one of the Saudi public organisation from the financial sector as sample for measuring the feasibility of using ERP system through interviewing the responsible employees for preparing the ERP complimentary assets as well as whose using the system for accomplishing their assigned business activities.

Worldwide, the enterprise resource planning (ERP) systems considered as the future of the organisation which is replaced gradually instead the old systems (legacy systems) because of the high efficiency of these systems. ERP system is a standard software system that integrates functions and data of several types of business application systems that support tasks of different company areas. This integration is achieved using a common data model for all system components (Abts & Mülder, 2002; Rautenstrauch & Schulze, 2003; Gronau, 2004). ERP system is considered as road map for business process reengineering which needs the involvement of managers from different levels and departments in the organisation during the implementation process (Bradford & Florin, 2003; Madsen, 2005). In spite of, the various advantages of this systems there are some drawbacks like complexity, time consuming for implementation and the high related cost because the needed high-end computer hardware and high customization cos (Brehm & Marx Gomez, 2007; Al-Turki, 2011). Also ERP in Saudi Arabia the most of the organisation invested in implementing ERP systems in public and private sector by various industries like manufacturing, Gas and Oil, retail, IT and finance and Banking. All those organisations prepared their self as well as possible to success of their investment in ERP system through increasing the productivity of this system against the legacy systems. Therefore the most of these organisations has been created ERP implementation project team who is responsible to prepare the required need for system installation. Many studies focused on success factors of ERP implementation and provided best practices from different points of view to guide the 0rganisation to successful implementation. This paper will study the consideration of the investment in complementary assets (technology, management and organisational assets) as success factors (Brown et al., 2009) for the investment in ERP system as important type of information system which widely replaced in the organisations through using case study to explore the consideration of those assets and the productivity of the systems. The study has been applied on a big organisation in financial sector (but it did not allowed us to name it because of confidentiality issue). This paper in structure, will continue with literature review, research methods, results explanation, and discussion will be closed with the conclusion.

Many studies has been focussed on the success factors of using ERP systems from various perspectives which will be summarized in Table 1 here as related work to this paper. This table classify the success factors presented from different Authors with consideration of the three complementary assets.

Table 1 shows many references as sample of the literature related to success factors and there are a more researcher who similarly like Hong and Kim (2002); Osman (2018); Rashid (2018); Reitsma and Hilletofth (2018); Barth and Koch (2019); Huang et al. (2019); Kiran and Reddy (2019a); Kiran and Reddy (2019b); Syafiraliany et al. (2019); Almigheerbi et al. (2020); and Vargas and Comuzzi (2020). Most of the success factors that proposed in the related works belong to the three complementary assets (management, organisational and technical), Table 2, therefore, this paper focused on investigation of the effects of the consideration of those complementary assets on the success of the installed ERP systems and investigated that among three of organizations in public sector.

This paper use the exploratory study with focusing on one big sized organisation from financial sector in Saudi context. The organisation invested in ERP systems to increase the productivity and efficiency through this integrated systems comparing with the used legacy systems.

The exploration has been achieved through using various questionnaires in form interviews which has been distributed to the responsible departments in the interviewed organisation for the three complimentary assets. These questionnaires were designed to measure the determining the complementary assets by deployment of the ERP systems (as independent variables) and their effect on the success of these systems which will be measured through the exploration of user satisfaction (9 dependent variable) (Figure 1).

The questionnaires were including the following questions:

The main areas where the first questionnaire focused on measuring the consideration of organisational asset:

2. If the organisation reengineered the business processes according to system requirements

3. If the organisation asked the provider for customizing some processes in the system to meet some roles and responsibilities of the users

Number of the interviewed employees was 10 employees.

The main areas where the second questionnaire focused on measuring the consideration of management asset:

1. If the organisation prepared the employees enough for the transformation to the new system including the suitable training

2. How far was the resistance of the system from the employees during the implementation process

Number of the interviewed employees was between 10 employees from every organisation.

The main areas where the third questionnaire focused on measuring the consideration of technical asset:

1. How fare did the organisation invested in suitable IT infrastructure for the new system

2. What about the old data migration and preparing the suitable database management system for the new system.

Number of the interviewed employees was 10 employees.

The main areas where the fourth questionnaire focused on measuring the success grad with the new system:

1. If the new system supports the business processes at the expected level of efficiency

2. The availability of the new system

3. Do the system support all the processes in the organisation

4. If the new system is user friendly

Number of the interviewed employees was 65 user. 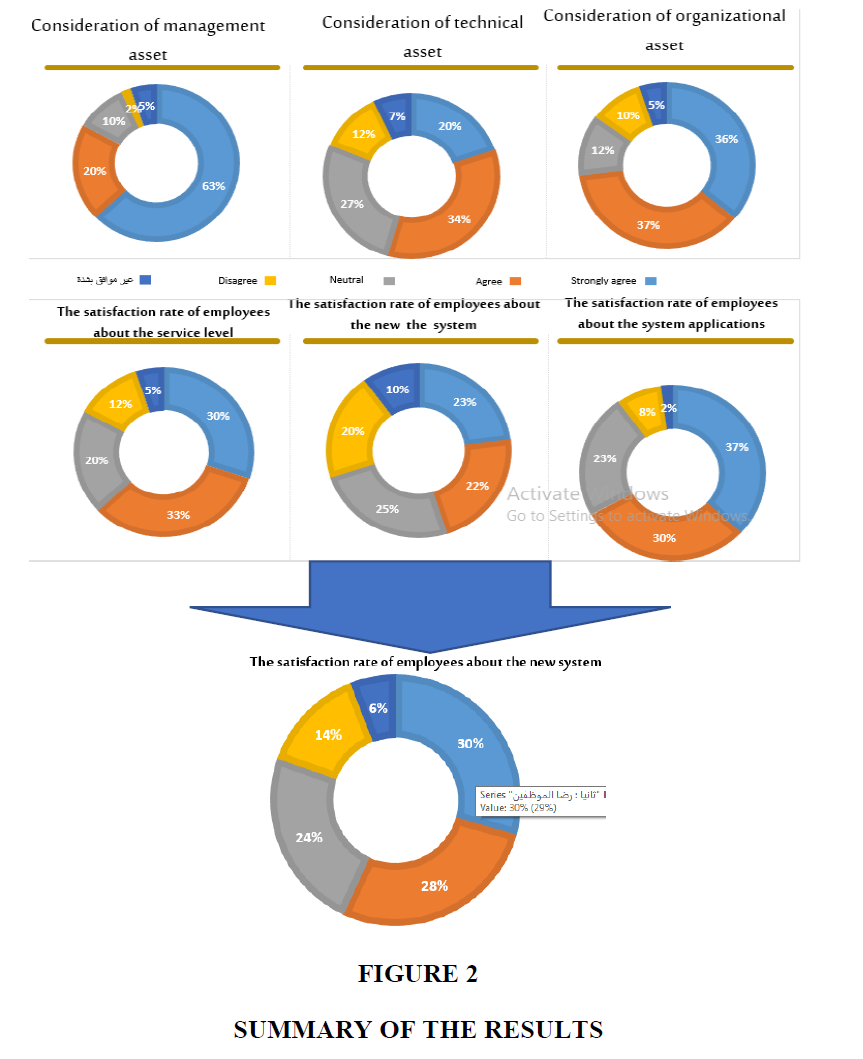 Figure 2 Summary of the Results

The Result Related to the Three Independent Variables (Organizational, Management and Technical Asset).

The percentage of satisfaction with the consideration grad of organizational asset which includes business process reengineering and restructuring in was (67%) for the interviewed organisation which represent the feedbacks of agreed and strongly agreed employees from the responsible department for organisational changes.

The percentage of satisfaction with the consideration grad of management was (54%) which represent the feedbacks of agreed and strongly agreed employees from the responsible department for change management. That refers to lack of consideration of the management asset which focus on preparing the human resource.

The percentage of satisfaction with satisfaction with the consideration grad of technical (or technology) asset for those who agreed and strongly agreed from IT department was (83%) what means that the organisations focused on suitable investment in the appropriate IT infrastructure for the new system.

The percentage of satisfaction with the applications of the new system if it covers all the needs for supporting the business processes was (67%).

The percentage of satisfaction with easy to use of the new system was (45%).

The percentage of employees 'satisfaction about the service level of new ERP system (including the efficiency and availability) and the service was 63% average).

The overall average of the satisfaction with ERP systems in the studied organisation was about 58% which represents the success grad of the new ERP systems.

Based on the results presented above, the interviewed organisation invested in the three complementary assets to prepare the suitable environment to increase the success of the new ERP system but the indicators which represented through the satisfaction rate with the new system refer to lack in the investment especially in the management asset which focus on preparing the human resources through appropriate training and change management plans and what confirm that is the more important problem faced during the transformation phase to ERP system in all the interviewed organisation was the resistance of the employees especially the employees who worked for a long time with the old system.

The contraption of this paper focused on the investigation of the consideration and investment in the complimentary assets including organisational, management and technological aspects and the effects of this consideration on the success of the ERP system through instigating the satisfaction rate of the users about the level of services and functionality provided from this system. The study covered one big organisation from financial sector in the Saudi context which is one of the most growing market of ERP solutions because the most of the organisations especially the large sized are replacing the integrated ERP systems instead the legacy systems.

The main idea of this work handled the measurement of the relationship between consideration grad of three independent variables (organisational, management and technical or technological assets) and the success of ERP system as dependent variable. The measurement has been accomplished through an organisation as case study with focusing on the responsible department for preparing the three assets in case the transformation to the new ERP systems in addition to sample of the end users.

The results refereed to strong relationship between the consideration grads of complimentary assets and the success of the new systems because the average of the assets related percentage was close to the average of user satisfaction rate which represent the success of the new system and the organisations should take more consideration for the complimentary assets especially the management asset through investing more in the human resource preparation during the transformation stage.

The researchers extend their thanks and gratitude to the Deanship of Graduate Studies and Scientific Research at Dar Al Uloom University for their support and funding of this study.