The purpose of this study was to s to examine the impact of Multicurrency regime on financial reporting using National Property Consultancy (Pvt.) Limited as the case. In conducting the research, a census of 20 people was used from NPC and a quantitative research approach was used. Questionnaires were administered to twenty respondents. Also, a regression analysis was carried out to determine the relationship between Multicurrency system and financial reporting and the results showed that there is a positive relationship. The research findings showed that, during the Multicurrency regime firms saw financial reporting becoming a challenge due to shifts in government policies which preclude them from reporting in accordance with prescribed standards such as IAS 21, failure to attract skilled staff with foreign currency exposure experience as well as failure to acquire multicurrency system tailored software. The research findings further established the best industry practises that firms can use, in case redollarization occurs in future. The firm was recommended to establish seminars and training programmes for the workforce, carry out multicurrency diversification to hedge risks, make use of multicurrency programs to track exposure, consult regulatory boards and foreign currency specialists, and approach the government to work hand in hand when making monetary policies.

Eventually after her birth in 1980 according to Munangagwa (2009), the Rhodesian dollar was substituted at parity by the Zimbabwean dollar according to (Munanga, 2013). According to Kanyenze (2010) suggested that during the independence era the Zimbabwean dollar was once compared with both the British Pound and the American dollar on the official exchange market. Nevertheless, the currency hastily devalued losing that position accordingly due to a series of developments that took place according to Mutsagondo & Makanga (2014) which subsequently led to the extreme devaluation of the currency in 2008 as argued by (Kairiza, 2014). In this review, from the year 1998 to 2008, the Zimbabwean economy has been characterised by hyperinflation as argued by (Business Times, 2014). For that decade inflation figures were increasing exponentially that is 48% in 1998 to 585.84% in 2005 according to (International Monetary Fund) IMF (2005) and around November 2008, the estimated rate of inflation has reached a yearly rate of 79, 600 000 percent which labelled Zimbabwe the second highest occurrence of hyperinflation in history as advocated by (Hanke, 2012). Despite Zimbabwe experiencing a hyperinflationary economy according to Business Times (2014), it did not exceed that of Hungary that took place in July 1946 with a daily rate of 195% according to (Hanke, 2012). According to the Independent (2009); Coltart (2008) suggested that things started to fall apart the era towards 2008, with the Zimbabwean economy beleaguered by hyperinflation which was slowing down the economic development according to IMF (2008), subsequently leading the Zimbabwean dollar to become a valueless tool, unreliable for commerce and difficult for financial reporting as coined by (Munangagwa, 2009). Hence, to curb those problems to turn around the economy, dollarization was adopted by the government of Zimbabwe on the 30th of January 2009 according to (Reserve Bank of Zimbabwe) (RBZ, 2009; Biti, 2009; Noko, 2011).

Kramarenko et al. (2010), in a Multicurrency system environment, commerce and the payment of domestic taxes is mostly in foreign currency. According to Chigumira (2013), the adoption of the Multicurrency system by the government of Zimbabwe brought about greater transparency in pricing and reporting, and according to Barth & Schipper (2015) the adoption obstructed the inflationary financing of the budget by bringing hyperinflation to a halt. The multicurrency regime was a prescribed solution to increase investor self-assurance, bring back stability in pricing and improve credibility in financial reporting according to (Robson, 2012). Originally the adoption of multicurrency system was meant to be a prescribed momentary measure since there were no formal agreements between the Zimbabwean government and countries whose currency has been adopted, but with time the American dollar, the functional currency saw a basket of currencies being introduced to accompany it to operate as legal tender comprising of the British Pound, South African Rand, Euro and the Botswana Pula according to the (Reserve Bank of Zimbabwe, 2014).

Nhavira (2015) suggested that, at firm level, multicurrency system can be seen as software solutions that allows companies to trade internationally to finance their projects. According to RBZ (2015), the hyperinflationary environment was made up of multiple interest rates and multiple digits values which the banking system and accounting systems saw capacity limitations in handling enlarged volumes and multiple digits in values of transactions that were being processed at the time, hence the adoption of multicurrency system facilitated a fair presentation of financial statements by reducing volumes and multiple digits in values of transactions according to (Chaavure, 2017; Minda, 2000).

The researchers adopted quantitative research methodology. The target population was made up of management, administrators, officers and audit team at National Property Consultancy (Pvt.) Ltd. The researchers used census instead of sampling the targeted population, that is the authors distributed all questionnaires to the whole targeted population. A questionnaire was used to collect data (Chitambara, 2012; Moreno-Villaz, 2000).

To assess how multicurrency influence financial reporting, the researcher investigated the relationship between Multicurrency system and financial reporting, the study used the simple linear regression. The researchers used IBM SPSS 19 software and Microsoft excel to apply multiple regression to determine the relationship. The multicurrency system was measured using the company’s exposure to foreign currency by using FX exposure as the dependant variable. Measuring FX Exposure, Adler (1984) model was used, which states the formula for calculating FX Exposure using single factor to approximate changeability of the company’s returns on equity to the conversion rate. Financial leverage, Asset tangibility and Profitability were the independent variables. The leverage was substituted by debt ratio, asset tangibility as an alternative to strength of Assets and Profitability ratio was substituted by ROA (return on assets). In this particular project, the scholar’s interest was to determine the impact of Multicurrency system on Financial Reporting. The regression analysis was used by using the following formulae: 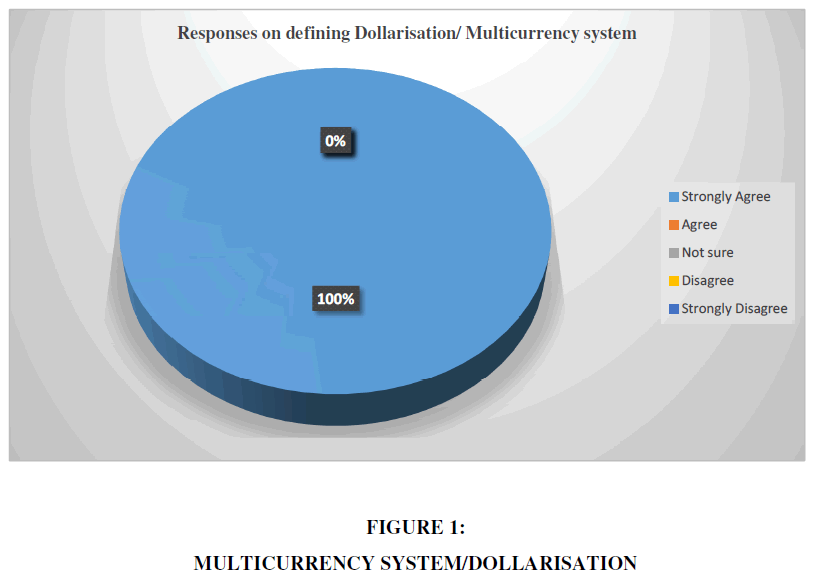 Adoption of Multicurrency system by the firm on reporting

According to the above chart Figure 2, 11/20 (55%) of the respondents strongly agreed with the view that the entity adopted multicurrency system on its financial reporting system.4/20 (20%) of the respondents also agreed with the same notion, 1/ 20 (5%) were not certain, 1/ 20 (5%) disagreed and 3/20 (15%) strongly agreed. A cumulative of 73% of the respondents agreed that the firm adopted multicurrency system on financial reporting. According to PAAB (2018), suggested that when the government introduced the multiple currency regime, firms also adopted the system and commenced producing their reports in USD. On the other hand, 3/20 (15%) who disagreed on the notion that the entity adopted the multicurrency system on financial reporting. According to Lavis (2018) suggested that due to the currency exposure risk that is associated with firms operating in a multiple currency environment there is need for managers to ensure financial reporting is being carried out according to prescribed reporting standards to prevent the possible negative impact on value of company assets, liabilities and cash flows which might arose from exchange rate fluctuations. 1/20 (5%) were not certain about the subject matter which means there either agreeing or disagreeing (Cosmin, 2010; Friedman, 1992). 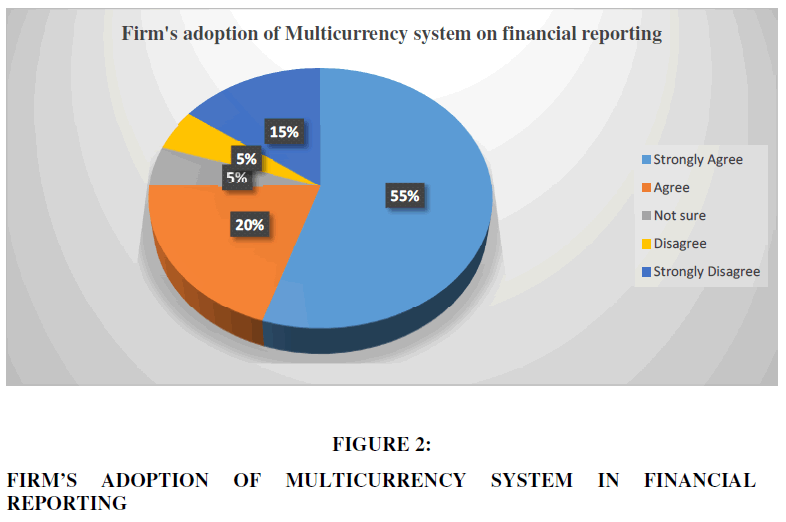 A mode of 11 respondents representing 53% were attained who were strongly agreeing that the company fully adopted multicurrency system on its financial reporting. A mean of 3.95 was obtained which is closer to 4 which indicates the most of the respondents agreed Therefore, this gave the researcher a reasonable assurance that the entity adopted the system partially (Coomer & Gstraunthaler, 2011; Forbes et al., 2013). 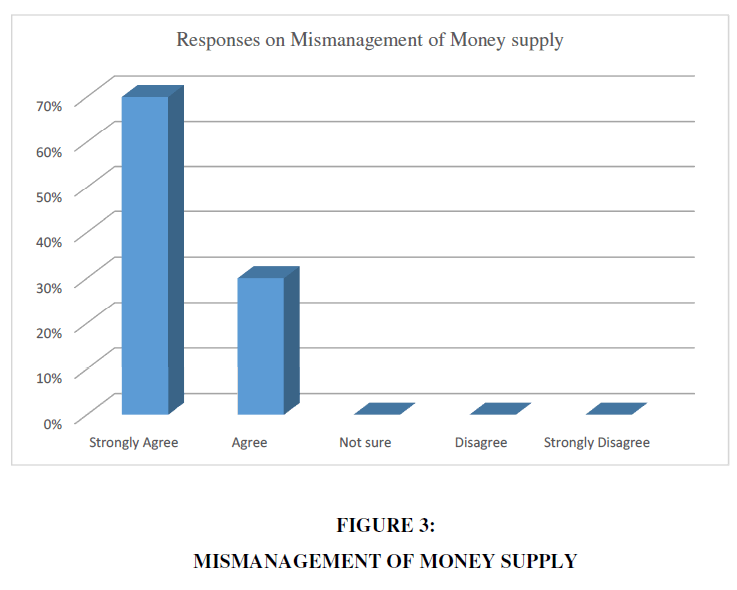 The multiple correlation coefficient is shown by R, which quantifies the superiority of the estimate by the dependant variable FX exposure, the value of 0.760a designates a virtuous degree of forecasting. Adjusted R2 is a determination coefficient is the quantity of difference in the dependant variable due to alterations in the independent variable. According to the results above in Table 1, the value of adjusted R2 was 0.577, which indicates 57,7 % changeability in the FX exposure of NPC and the 42.3% (100%- 57.7%) of the variation is due to changes of the asset tangibility, debt ratio and ROA at a 95% confidence interval.

From the data above the established regression equation was

From the above formulae, it was highlighted that if ROA, Asset tangibility and debt ratio held at zero the FX exposure is estimated at 1.225 point in Table 3.

A negative association between asset tangibility and FXE was revealed by this study. Hence, when the asset tangibility increases by a point, the FX exposure will decrease by 0.29 point. Therefore, when the firm has a high proportion of fixed asset compared to its total asset, it will be prevented from the exposure to foreign currency risk through the high fair value of the fixed asset

Alles, M., & Gray, G. (2014). Developing a Framework for the Role of Big Data in Auditing: A Synthesis of the Literature. Working paper, Rutgers, The State University of New Jersey.

Wang, T., & Cuthbertson, R. (2015). Eight issues on audit data analytics we would like to see researched. Journal of Information Systems.

Wadesango, N., Mhaka, C., & Mugona, B. (2020). Literature review of the effect of corporate governance on financial performance of commercial banks in a turbulent economic environment. Academy of Strategic Management Journal, 19(3), 1-14.