Since ancient times, gold was accepted as a universal means of the exchange (Tripathi, Parashar, & Singh, 2014). It is considered as a safe investment and used in large quantities during festivals and ceremonies in India. Gold has been a sizeable component of the portfolios of Indian households. The gold price seems to have an upward trend throughout, even during the recession and people use gold as a status symbol (Bhunia & Das, 2012). The price changes in gold affect almost every investor in India. Hence analysing the volatility of gold gained importance in the recent years (Tully & Lucey, 2007).

The remainder of the paper consists of an overview of conditional heteroskedasticity models followed by a review of literature and research methodology. The discussion on the results and conclusion are presented at the end of the paper.

Auto Regressive Conditional Heteroskedasticity (ARCH) model was developed by Engle (1982) and extended by Bollerslev (1986) and Nelson (1991). ARCH model was an important improvement over the rolling standard deviation, which was used as a measure of volatility in those days (Engle, 2001).

Bollerslev (1986) generalized ARCH model developed by Engle (1982). He defined conditional variance as an Autoregressive Moving Average (ARMA) process. GARCH process introduces the lagged conditional variance as a regressor (Bollerslev, 1986).This generalization enabled the model to produce better results with few lags. The general specification of GARCH (1,1) model is given in equation (1).

is the variance for the time period t. αi and βj are coefficients. εt-i is the lagged residual from the mean equation and

is the lagged variance from the period t-j. Variance is always a positive number. In order to satisfy this constraint, αi>0 and βj>0 was also specified. The GARCH (1,1) model has three components, the constant

, the news about volatility from the previous period (ARCH term

An ordinary ARCH model is a special case of a GARCH specification where no lagged variances are included in the equation (Tripathi & Seth, 2016).

TGARCH model estimates the variance as a function of a constant, lagged residual term and lagged forecast variance. Symmetrical models like GARCH and ARCH assume that the lagged positive and negative residuals (innovations) have the same impact on the variance. But it was observed in the past that bad news has larger impact on volatility compared to a good news (Ding, Granger, & Engle, 1993). Asymmetrical models estimate an asymmetric or leverage coefficient (γi), which can test the presence of an asymmetric effect. The general form of TGARCH model is given in equation (2) (Glosten, Jagannathan, & Runkle, 1993).

have differential effects on the variance. The impact of good news is measured by the coefficient

then it indicates the presence of leverage effect which means negative shocks to the price of an asset leads to a higher next period volatility.

Conditional varinace is assumed as a linear function of lagged squarred residuals in GARCH model (Ding, Granger, & Engle, 1993). But in the literature, high autocorrelation was found for power transformed absolute returns than the actual returns (Nelson,1991). Hence, models based on power transformed residuals must perform better than GARCH models.

is the variance for the time period t,

is the unconditional variance or the constant,

is the lagged residuals from the mean equation and

is the lagged forecasted variance. When

Christie, Chaudhry & Koch (2000) analyzed the impact of macro-economic announcements on the intraday data of gold and silver prices in the US for the period 1992-1995. Linear Regression was used to analyse the impact of the news announcements. The asset price variance was found to be very high in the news announcement days than the non-announcement days. Gold and silver prices were actively responding to the CPI, unemployment rate and GDP announcements. Worthington & Pahlavani (2006) emphasized the stable relationship between gold price and inflation rate and they insisted that gold be an appropriate hedge against inflation in the US. Tully & Lucey (2007) found that APGARCH model was a good fit for examining the conditional volatility of gold prices in the UK. They used likelihood ratios to test the goodness of fit. They also analysed the impact of macroeconomic variables on the conditional volatility of gold price in the UK. Among the macroeconomic variables studied, only US dollar was found to have a significant impact on the gold price.

Toraman, Başarır & Bayramoğlu (2011) modeled the conditional variance of US gold price using M-GARCH model for the period of 1992-2010. They found evidence for an inverse relationship between US exchange rate and US gold price and significant positive relationship between gold and oil prices. They also suggested that gold may be used as a hedge against US dollar. Mishra (2014) felt that gold is one of the best investment choices and the best alternative for US dollar. Gencer & Musoglu (2014) applied GARCH model to the gold price in Turkey and found that past volatility of stock market returns influences the current volatility of gold price. Singh & Kaur (2015) anaysed the stock market linkages and volatility spill overs using Tri-variate Vector autoregression and TGARCH (1,1) during period of 2007 to 2009. They found unidirectional causality from US market to Indian market. They also found a unidirectional volatility spillover from the US market to Indian market.

Statement Of The Problem

Studies in the literature also suggests that US stock market return influences the stock return and volatility of Indian stock market. An attempt was made in this study to test, whether the same phenomenon is found in gold market in India as well. Hence this study analyzes the impact of US gold price on the volatility of gold prices in the selected Indian cities.

Objectives Of The Study

1. Examine the presence of volatility clustering and asymmetric effect feature in gold price volatility in India.

2. Investigate the impact of US gold price return on gold price volatility in India.

This study is entirely based on secondary data. The daily US gold price data were acquired from the database of World Gold Council and the daily gold price in Indian cities were collected from website www.goldratecity.com. The price of gold in the United States was collected in US Dollar per troy ounce. This rate was then converted into price per gram and was expressed in US Dollar. The sample period for the study was from 1, January 2011 to 31, August 2017 (1,686 daily observations). To study the gold price volatility in India, six major cities were chosen. The cities chosen for the study are Bengaluru, Chennai, Delhi, Hyderabad, Kolkata and Mumbai. The daily gold price of chosen cities in India was expressed in Indian rupees.

The return on the gold price was calculated as the logged differences as mentioned in equation (4).

The descriptive statistics for the gold price for the selected cities in India (in INR) along with US gold price (in USD) are presented in Table 1.

Augmented Dickey-Fuller (ADF) Unit Root test was applied to the gold price returns of the chosen cities in India and of the US. This test was applied to examine the stationarity of the data. This test was necessary as non-stationary data will lead to incorrect conclusion (Dickey & Fuller, 1979). The null hypothesis of ADF unit root test is that the time series is non-stationary or it has a unit root. The observed t-statistics and the probability values of ADF unit root test are presented in table 2.

The null hypothesis of non-stationarity was rejected for all the data series as all the calculated p values were less than 0.05, indicating the fact that the entire gold price returns data both in India and in the US were all stationary at level.

PGARCH model was applied to the gold price returns of chosen cities in India to estimate the conditional variance. The presence of asymmetric effect and volatility clustering was also investigated. In order to test the impact of US gold price influence on the volatility, US gold price returns were introduced as a regressor in PGARCH equation for each of the cities. The model used in this study is shown in equation (5)

is the lagged residual from the mean equation,

is the lagged forecasted variance and

is the coefficient measuring the impact of US gold price return on the volatility of gold prices in India.

is the lagged returns and

is the residual. PGARCH coefficient estimates and their respective probability values are presented in Table 3.

coefficients were all significant at 5 percent level for the cities studied. Significant GARCH terms indicate the presence of volatility clustering in gold price volatility in India. Asymmetric

coefficients for all the cities were significant at 5 percent level except for Delhi. This result supports the presence of leverage effect in gold price volatility. The estimated power transformation coefficients (δ) were ranging from 1.266 to 1.660 which is different from 2.

The coefficients estimated for three out of six cities were significant at 5 percent level. The coefficients for the gold prices in Delhi, Hyderabad and Kolkata, were not significant, indicating the fact that PGARCH model fitted well for these cities and the residuals are free from ARCH type of heteroskedasticity.

The conditional variance plots for all the six Indian cities are presented in Figures 1-6. These plots depict the features of the gold price volatility of the chosen cities over the study period. 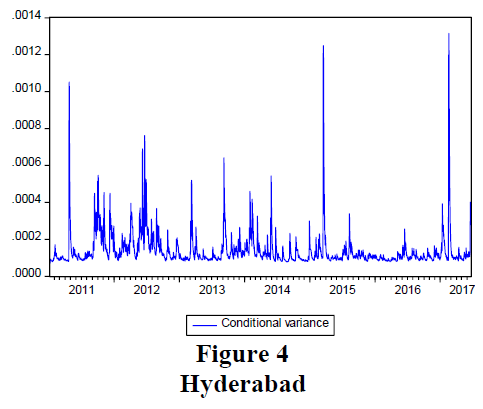 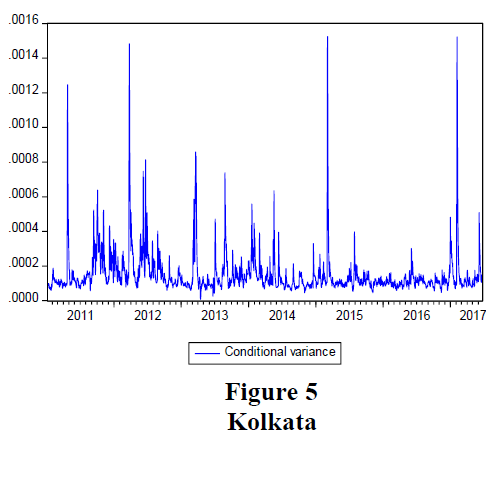 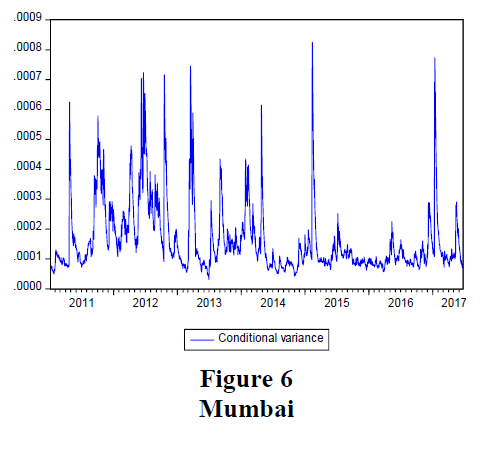 It can be observed from figures 1 to 6, that from 2011 to of 2014 gold price in India was very volatile. The time period between 2015 to 2016 witnessed relative stability in the gold price in India. It can also be noticed that the conditional variance estimates were different between Indian cities and all of them were showing signs of volatility clustering.

Bhattacharya, K., Sarkar, N. & Mukhopadhyay, D. (2003). Stability of the day of the week effect in return and in volatility at the indian capital market a garch approach with proper mean specification. Applied Financial Economics.

Dickey, D.A. & Fuller, W.A. (1979). Distribution of the estimators for autoregressive time series with a unit root. Journal of the American Statistical Association, 427-431.

Singh, A. & Kaur, P. (2015). Stock market linkages: Evidence from the US, China and India during the subprime crisis. Timisoara Journal of Economics and Business, 137-162.