There are many firms that are facing unethical business issues nowadays (Shafique et al., 2015; Suryanto, 2016). Some firms experience huge loss and some others even go to bankruptcy (e.g. Enron, worldCom, Tyco, American Insurance Group (AIG), Lehman Brothers, Bernie Madoff, etc.). The main problem of all those scandals is the lack of ethics implemented in business practices. Therefore, ethics issues are important as one of the solutions in solving business scandals (Yazid & Suryanto, 2016). Many scholars rely on a theory focusing on work ethics that is based upon Max Weber theory. The theory emphasizes the capitalism economy, but it fails to apply justice since it gives individuals the freedom to engage in all economic activities (Thalassinos et al., 2010). Thus, the current study proposes Islamic work ethics to be used as a guidance to solve problems in current business practices.

The objective of this research was to observe the influence of Islamic work ethics and their implementation on organizational justice, as well as their subsequent effect on accountants’ job satisfaction. Results from this study would provide a positive contribution and input for accountants, organization leaders and those responsible in drafting ethical codes for professional associations. If the government and stakeholders stress on the urgency of implementation of Islamic work ethics in organizational working environments, good governance will then run harmoniously with the values expressed in the Quran and Hadith. This paper is organized as follows: Section 2 discusses the theory and hypotheses development, Section 3 reports the data collection and measurement. Section 4 discusses the analysis and some of the findings and Section 5 concludes the paper.

Another study was also conducted by Farahizade & Belaghat (2013) on male and female school managers in Iran. This study showed that there was a positive relationship between Islamic work ethics with procedural justice and interactive justice, but not with distributive justice. Another study was conducted by Khan et al. (2015) on medical faculty members of a large private university in Pakistan. Their study showed that Islamic work ethics could reduce employees’ turnover intentions when the organization implemented procedural justice and distributive justice. While Farsi et al. (2015) carried out a study on officers in the Police Department of Iran. Their study found that Islamic work ethics could encourage the implementation of organizational justice.

Based on these concepts, theories and previous studies, the conceptual framework used in the current authors own study, which described relatedness of the tested variables is shown in Figure 1. 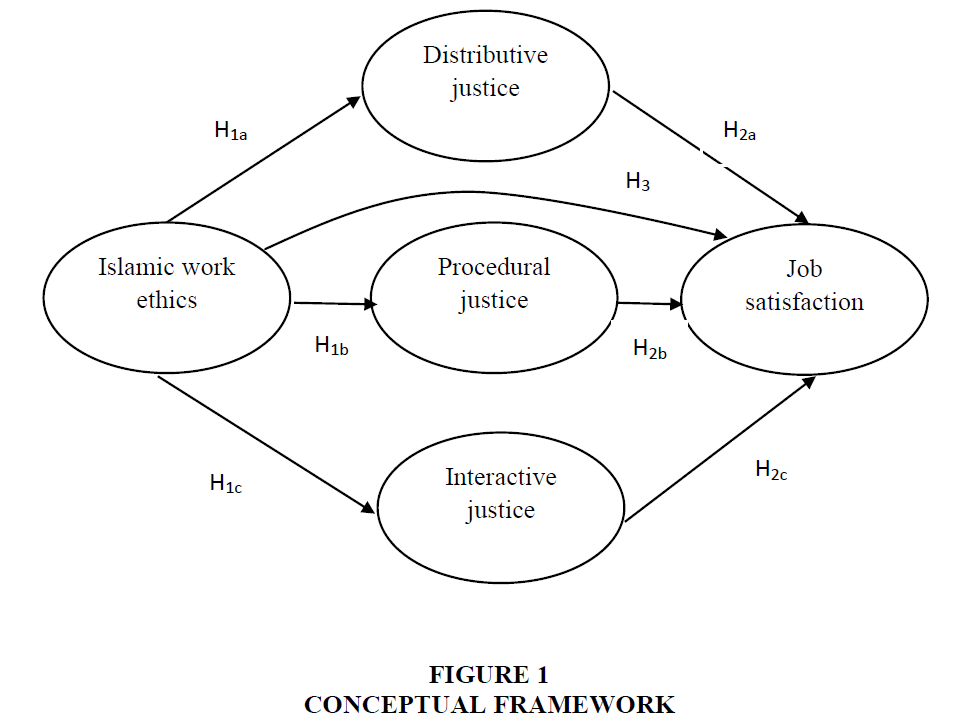 Respondents in this study consisted of 202 accountants who worked in Indonesian Islamic financial industry. Data was collected by providing questionnaire to the accountants. Sample selection was performed using a purposive sampling method. Variables in theoretical model were latent variables relatedness. Data was collected and managed by using AMOS 21 program. Respondents were asked to rate their level of agreement on statements written in the questionnaire using Likert scale, with 1 rated as “totally disagree” and 5 as “totally agree”.

The Main requirement needed to perform SEM analyses is that the data should be normally distributed (Byrne, 2010). In the current study Jarque Bera test (JB test) was used for Normality testing. There were three requirements to be fulfilled. First, all indicator items that formed a construct had to be normally distributed. The result from JB test was less than chi square value at α=5 percent. The value of χ2 (0.005,2) =5.99 obtained from the Jarque-Bera test result showed that the entire indicator value was less than 5.99, which meant the data was normally distributed. Second, the loading factor for all indicators had to be at least 0.5; and third, the model must had an acceptable fit (Table 2). After deleting some outliers, the results fulfilled the three conditions required.

Based on the hypotheses testing (Table 3), Islamic work ethics did not show significant influence to distributive justice. As a result, H1a was not accepted. This finding was not consistent with the majority of previous researches (e.g. Rokhman and Hassan, 2012; Khan et al., 2015; Farsi et al., 2015; Sarmadi et al., 2017), except with Farahizade & Belaghat (2013) who also reported similar finding. Justice refers to the fairness of organizational practices in any aspects that are related to resources allocation (Rokhman and Hassan, 2012). Distributive justice is absent when equal work does not produce equal outcomes or when an individual or a group acquires a disproportionate amount of goods (Khan et al., 2015). This is also confirmed by Durkhanai et al. (2016), who argued that organizations with proper human resources management apply reward systems for their employees.

If distributive justice is connected with Islamic work ethics, its application will not merely consider proportionality of reward. Rokhman (2010) stated that there were many important things to be considered in terms of justice in the Islamic context. It covers placing employees in the most suitable position based on their ability, making right decisions based on situations and rewarding the right person. As a result, H1a was rejected since Islamic work ethics teach people to work not only to gain rewards, but also to achieve blessings from Allah (God). Rewards are believed to be gained automatically when employees perform their best.

Next, the output results showed that Islamic work ethics significantly influenced procedural justice and interactive justice with loadings of 0.23 and 0.50, respectively, which were significant at the levels 0.001 and 0.01. Therefore, H1b and H1c were accepted. It meant that Islamic work ethics strengthened both procedural and interactive justice. This finding was consistent with previous studies (e.g. Rokhman and Hassan, 2012; Abbasi & Rana, 2012; Farahizade & Belaghat, 2013; Farsi et al., 2015; Sarmadi et al., 2017). In justice theory, procedural justice is felt by all employees as a chosen process to determine reward distribution (Robbins and Judge, 2013). It is a concept that focuses on the method to determine the acceptable rewards for employees (Zainalipour et al. 2010). Furthermore, Marri et al. (2013) viewed procedural justice as a finishing procedure by third parties through arbitration and mediation within the steps of a decision-making process.

Statistical analysis of the second hypothesis showed that there was a positive and significant relationship between each of the three dimensions of organizational justice and job satisfaction. The output results from this relationship were 0.34, 0.43 and 0.47, which were significant at 0.001. Therefore, H2a, H2b and H2c were accepted and Islamic work ethics positively influenced distributive, procedural and interactive justice. This findings were consistent with the findings from prior researches on organizational justice and job satisfaction (e.g. Zainalipour et al., 2010; Al-Zu’bi, 2010; Tziner et al., 2011; Nojani et al., 2012; Dundar & Tabancali, 2012; Lotfi & Pour, 2013; Altahayneh et al., 2014; Lopez-Cabarcos et al., 2014; Khan et al., 2015; Ouyang et al., 2015; Hao et al., 2016; Kashif et al., 2016). If an accountant’s working environment is conducive and dynamic, the accountant will give an optimum work performance. Through this optimum performance, they will receive an adequate reward, which will satisfy them. A satisfied employee will minimize their fraud activity (Zhang et al., 2014). Such conditions will push the implementation of good corporate governance (Tout et al., 2014; Hoitash et al., 2016; Elmassri et al., 2016; Suryanto, 2016). Eventually, it can be expected that large fraud cases such as Enron, worldCom, Tyco, AIG, Lehman Brothers, Bernie Madoff and others may no longer occur.

High job satisfaction will minimize an employee’s intention to leave (Bayercelik & Findikli, 2016). Furthermore, Najjari & Davoudi (2013) stated that comprehending the relationship between Islamic work ethics and job satisfaction has become a critical means to explore the factors to explain reduction in job satisfaction. This finding is important for the accounting profession. The implementation of Islamic work ethics will push accountants to work suitably with the moral principles in Islam, which differentiate between right and wrong (Rokhman, 2010; Ahmad & Owoyemi, 2012). Islamic work ethics stress the cooperative aspects involved in solving or overcoming problems at work, while creativity and diligence are the main keys to reach achievement (Ajmal & Irfan, 2014).