This study fills the gap from previous research and there is still very little research related to business performance in relation to gender in Indonesia. In addition, small businesses need to upgrade their grades and minimize the gap in ability between male and female entrepreneurs in order to make a better contribution to the Indonesian economy, society and also to their own business.

The classical gender theory based on de Beauvoire (1949) sees the differences between men and women not based on biology or nature but based on a social construction which divides them into two categories, namely the first gender, namely male is the dominant category and the second gender, namely the female being the category that is divided into two categories. subordinated. In other words, men are judged to have more strengths, advantages in all circumstances such as in business and vice versa, women are considered to have more weaknesses, disadvantages in doing business. Therefore, questions arise and are questioned, so it is necessary to conduct an empirical study related to gender to highlight the inequality between the two categories in the context of doing business.

Various studies of SMEs related to gender in reputable journals produce different views. Previous studies have revealed that women entrepreneurs are underperforming men entrepreneurs (Cron et al., 2006; Driga & Prior, 2010; Ismail, 2014; Singh et al., 2001). While other studies argue that the performance of businesses managed by men is lower than that of women (Simo Kengne, 2016; Stošic Panić, 2017). Then other studies have the view that there is no gender relationship with performance but rather the goals that entrepreneurs want to achieve, the time and capital they have prepared (Watson et al., 2017). Women's entrepreneurship has grown significantly worldwide, and it is widely established that entrepreneurship is essential to wealth and economic growth. Despite these facts, the participation of women in entrepreneurship is lower than that of men in almost all industries (Cabrera & Mauricio, 2017). This different view of the business performance of women and men is interesting to investigate further in the context of Indonesian small businesses and also to consider that the number of women and men entrepreneurs in Indonesia is not significantly different.

Thus, the provisional conjecture of this study is business performance of business owners with female gender is greater than that of men.

This research is a quantitative research. Data was collected by distributing questionnaires online, related to business performance of entrepreneur. Data collection time is only taken within a certain period of time or what is called cross-sectional. The sampling technique of this research is non-probability - purposive sampling with the criteria of respondents being Indonesian businesses with a minimum income of 300 million to 2.5 billion per year and a minimum age of 3 years of business. Meanwhile, based on data on the population of small businesses in Jakarta reported by the Indonesian Central Bureau of Statistics of 9,791 units, the minimum sample for this study was 385.

This research hypothesis is related to the moderating variable, namely gender. Considering the scale of gender is nominal or categorical, namely 1 and 2, where 1 represents Male and 2 represents Female, the SEM solution for moderation with categorical moderators is the Multisample Model (Wijanto, 2015). The MultiSample procedure is illustrated as shown in the Figure 1 below: 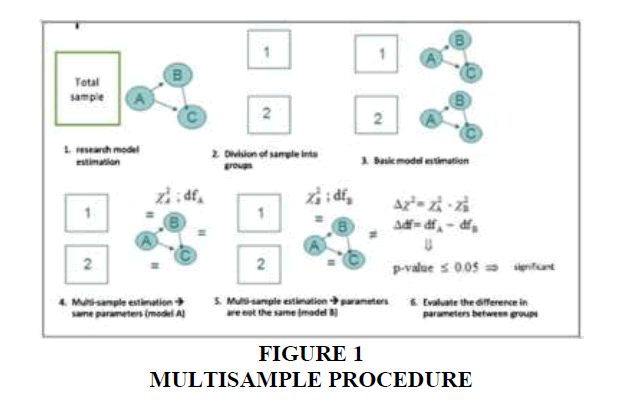 Based on the results of data collection, which was then carried out by profiling the respondents, it was found that the number of male entrepreneurs was not significantly different from the number of female entrepreneurs. Furthermore, most entrepreneurs come from generations Z, X and millennials with the level of education that does not differ significantly between high school graduates or equivalent and university graduates. On the other hand, although the majority of businesses have been running for more than 5 years, the annual revenue is still in the range of 300 million to 500 million shows in Table 1.

The SBP kappa value is -0.10 (negative), which means that the mean / mean SBP of group 2 (female subsample) is lower than the mean SBP of group 1 (male subsample). However, when viewed from the t-value, namely -1.12 and the absolute t-value = 1.12 <1.96= is not significant = there is no difference between the mean of group 1 and group 2. The conclusion is that the performance of businesses managed by men is not significantly different from the performance of businesses managed by women. 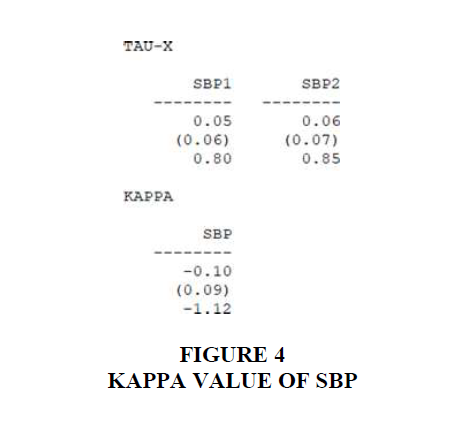 This research can be expanded further by adding new variables; comparative study of entrepreneurs across countries, culture, characteristics, business sector, size of business; and qualitative methods to get deep insights.

Dalborg, C. (2015). The life cycle in women-owned businesses: From a qualitative growth perspective. International Journal of Gender and Entrepreneurship, 7(2), 126–147.

Marlow, S. (2014). Exploring future research agendas in the field of gender and entrepreneurship. International Journal of Gender and Entrepreneurship, 6(2), 102–120.

Stošic Panić, D. (2017). Performance and financing strategies of female and male entrepreneurs in the Republic of Serbia. International Journal of Gender and Entrepreneurship, 9(2), 136–156.

Surangi, H.A.K.N.S. (2018). What influences the networking behaviours of female entrepreneurs?: A case for the small business tourism sector in Sri Lanka. International Journal of Gender and Entrepreneurship, 10(2), 116–133.