Entrepreneurial factors are important forces that can influence the dynamics of sustainable economic growth and well-being (Auerswald, 2015). In Schumpeterian theory, Huggins & Williams (2011) explains that entrepreneurship, knowledge, and regional innovation capacity are generally considered the key factors underlying the future of economic development and the growth of regional trajectories. The links connecting knowledge, entrepreneurship, and regional innovation, as well as their capacity and growth capabilities, are the core concepts of competitive advantage.

According to Isenberg (2011), the entrepreneurial ecosystem consists of six main domains, which include the culture, policy and leadership, availability of finance, quality human capital, markets, and various institutional and infrastructure support.

In the past years, network theory has successfully characterized the interaction among the constituents of a variety of complex systems, ranging from biological to technological and social systems (Boccaletti et al., 2014). It also has long been known to be influential in human communications and interaction, which explains why networks for interpersonal interaction and exchange feature prominently in distance study (Fulford & Zhang, 1993; Collins & Berge, 1996; Haughey et al., 1998; Fahy et al., 2001). Network theory refers to the mechanisms and processes of interaction within the network structure to obtain specific results for individuals and groups (Burt, 1992; Fritsch & Kauffeld-Monz, 2008; Borgatti & Halgin, 2011; Neumeyer & Santos, 2018). The network consists of a set of actors or shared nodes in a set of certain bond types (such as friendship) that connect them. The relationship is interrelated to achieve the same goal to form a path that indirectly connects actors who are not connected or directly bound. The bond pattern in the network produces a certain structure, and the actor occupies a position within this structure. Most network theory analyses look at the characteristics of the network structure and the position of the actor (centrality) and attempt to relate it to the achievements/outputs generated by groups and actors (Borgatti & Halgin, 2011).

The use of a network theory perspective in the entrepreneurial ecosystem is considered relevant because an ecosystem consists of discrete elements that interact with different network configurations. According to Letaifa et al. (2016) and Purbasari et al. (2018), “ecosystems are an extension of network theory.” Network theory may be utilized to describe relationships between organizations that have common or complementary features that facilitate access to resources and information or to define the structures of social interaction among organizations. Spigel (2017) considers that network theory has become a key element of entrepreneurial research. The network approach and strategic thinking are suitable means of The relational structure among different stakeholders in the entrepreneurial ecosystem is an aspect that is implicit in the network theory perspective, which explores the levels of connectivity between entrepreneurs, employers, government agencies, incubators, or members of accelerator organizations and investors or members of higher education organizations that influence social network connectivity (Neumeyer & Santos, 2018; Purbasari et al., 2018).

The term “creative industry” began to be used by researchers to describe the sectors of the British economy, where knowledge and creativity add economic and social values to goods and services (British Government Department for Culture, Media, & Sport, 1998, 2008; Parkman et al., 2012). One of the first literature on the creative industry was Wilson & Bates (2005), who developed the idea of “cultural industry” intended to draw attention to art commodities. The characteristics of creative industries include the centrality of innovation activities in organizational, product, and service markets, where consumer demands are highly subjective, changing and often have ambiguous boundaries between attributes, and focus on identifying opportunities to create values (economic and social) (Müller et al., 2009), and to the extent that creative industry workers often need to rely on networks to access skills, to collaborate, to be inspired and to assist their own creative development (Daskalaki, 2010; Jason & Cunningham, 2008; de Klerk, 2015).

To determine the actors playing the most roles in the entrepreneurial ecosystem, based on the network theory perspective on the creative industries in the East Priangan Region, this study used an analysis of network theory with the Gephi 9.2 application. The application was used to build a network structure with data from the results of open questionnaires. Gephi is a visualization and exploration tool for all types of graphics and networks (Bastian et al., 2009).

The conceptual framework of this research was developed with reference to modified theories based on Isenberg (2011), Mason & Brown (2014), Stam & Spiegel (2016) and Stam (2015), where the entrepreneurial ecosystem has the elements of actors consisting of business actors, government, banking, professionals, marketers, and social community members.

For the concept of network theory, the dimension used was centrality, which is commonly used in network theory research (Burt, 1992; Hanneman & Riddle, 2005; Fritsch & Kauffeld-Monz, 2008; Neumeyer & Santos, 2018). The dimension is also often used to determine the central node or actor in a network, including the centrality of the node (degree, betweenness, closeness, and eigenvector centrality), to identify the actors who influence or have high interaction values in the network (Brass & Burkharardt, 1993; Rowley, 1997; Setatama & Tricahyono, 2017). The results of the questionnaire data were first processed using the SPSS 20 application, which then evolved into laboratory data. Then, the results were processed using the Gephi 9.2 application. Furthermore, the resulting network structure was analyzed via a descriptive method.

Analysis using the Gephi 9.2 results in the following network structures:

The results of the laboratory data, which are supported by the results shown by the network structure of degree centrality, show that the surrounding community (as a part of social community actors) comprises the actors with the most connections (409) in the creative industry of entrepreneurial ecosystem in the East Priangan Region (Figure 1). 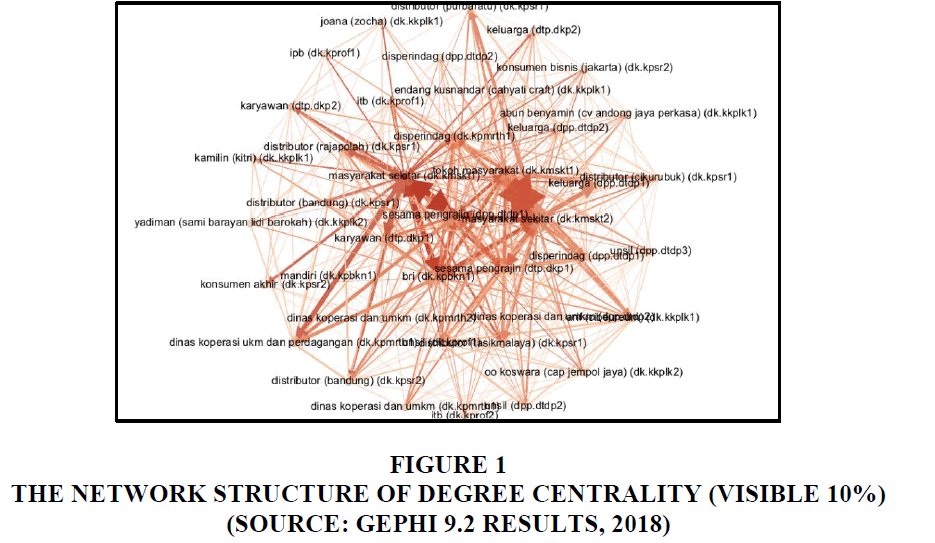 Government actors, such as the Education Office, state that the surrounding community members became learning citizens from the entrepreneurship training program organized by the offices. The Cooperative, MSME (Micro, Small and Medium Enterprises) and Trade Office considers that the community members are the targets of training and coaching to master the weaving skills and to advance the creative industry.

Thus, from all the connections that the surrounding community has and based on the description of the network structure of degree centrality, the surrounding community can be understood as the social community actors with the most connections with other actors. The surrounding community can also be implied as the most involved actor in the creative industry of entrepreneurial ecosystem in the East Priangan Region. This finding means that one of the aspects of the entrepreneurial ecosystem is the fundamental role played by social and cultural factors (Venkataraman, 2004). In many ways, entrepreneurship occurs within the framework of socio-cultural structures (Spilling, 1996), which are fundamentally and locally determined and strongly emphasized as road-dependence (Gertler, 2010; Welter, 2011).

Indicators of the Closeness Centrality

From the results of laboratory data and supported by the results of the network structure of closeness centrality (Figure 2), the actor with the shortest path (the highest degree of closeness centrality (0.666667)) is the surrounding community. The surrounding community members evolve into social community actors with the best ability to disseminate knowledge and information to all actors involved in the entrepreneurial ecosystem of the creative industry in the East Priangan Region. 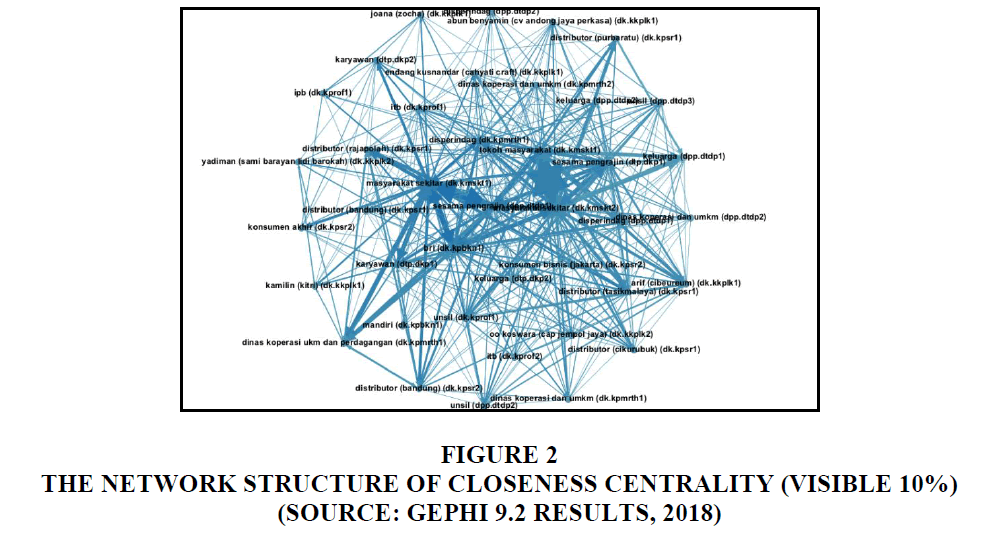 The description of the closeness centrality shows that the entrepreneurial ecosystem has a temporal dimension due to its progressivity and geographical dimensions, which are caused by closeness of the actors. The importance of entrepreneurial culture in ecosystems (Neck et al., 2004; Cohen, 2006; Isenberg, 2010; 2011; Kantis & Federico, 2012) is then ultimately highlighted. Entrepreneurship culture is born from the environment that shapes it, including society.

In relation to the role of the surrounding community, four frameworks illustrate why a region can become a profitable entrepreneurial ecosystem, two of which can explain the above conditions (Feld, 2012; Jennen et al., 2016).

First is the desired location because of external conditions or its location in the geographical area as the centre of entrepreneurship based on the economy aggregate. Thus, it builds a good economic scale. With various infrastructure, knowledge, suppliers, and the availability of labour with certain industry knowledge, companies can benefit from sharing ideas and reducing costs.

Second, network effects operate as follows: a rise in the number of people in the network enhances practices, inspiration, and talents which can be shared; it also increases the value of locations. Nevertheless, it requires more than mere co-location to create a horizontal network that develops a culture of openness and horizontal information exchange between companies and industries (Saxenian, 1996; Jennen et al., 2016).

Betweenness centrality is a measure of centrality in a graph based on shortest paths by quantifying the number of times a node acts as an intermediate (directly mediating) along the shortest path between two other nodes. 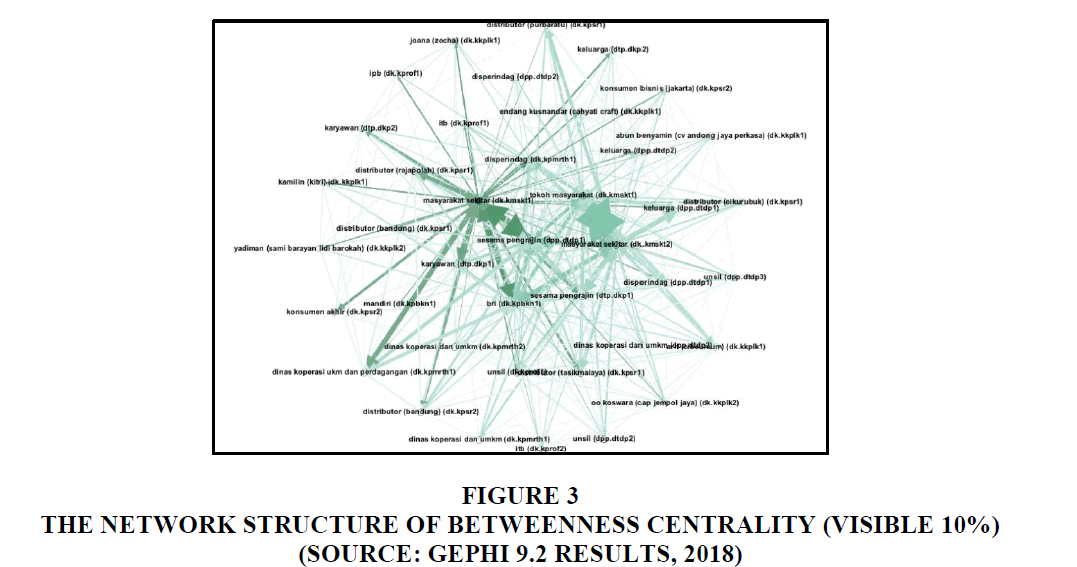 The role of the surrounding community members as an intermediary for many actors involved in the entrepreneurial ecosystem can help business actors in expanding networks, especially information and knowledge networks, and in encouraging or maintaining a culture of entrepreneurship. Minniti (2008) writes that social interactions in the local business environment will reduce ambiguity and uncertainty about entrepreneurial practices and new business processes. The mechanism shows how the local entrepreneurial culture, regardless of its source, creates new entrepreneurs. In turn, the latter helps maintain culture from time to time. In fact, the externality of local social networks in entrepreneurship, regardless of whether they are related to information, knowledge, effect status, or self-confidence, shows that entrepreneurship increasingly strengthens over time (Andersson & Magnus, 2014).

From the results of laboratory data and supported by the results of the network structure of eigencentrality (Figure 4), the surrounding community is the actor who has good connections and well connected with other nodes or actors in the network of entrepreneurial ecosystems in the East Priangan Region; the actor with the highest degree of eigencentrality (1). Thus, the surrounding community, as part of social community actors, can be understood as the most important actor in the entrepreneurial ecosystem of the creative industry in the East Priangan Region. 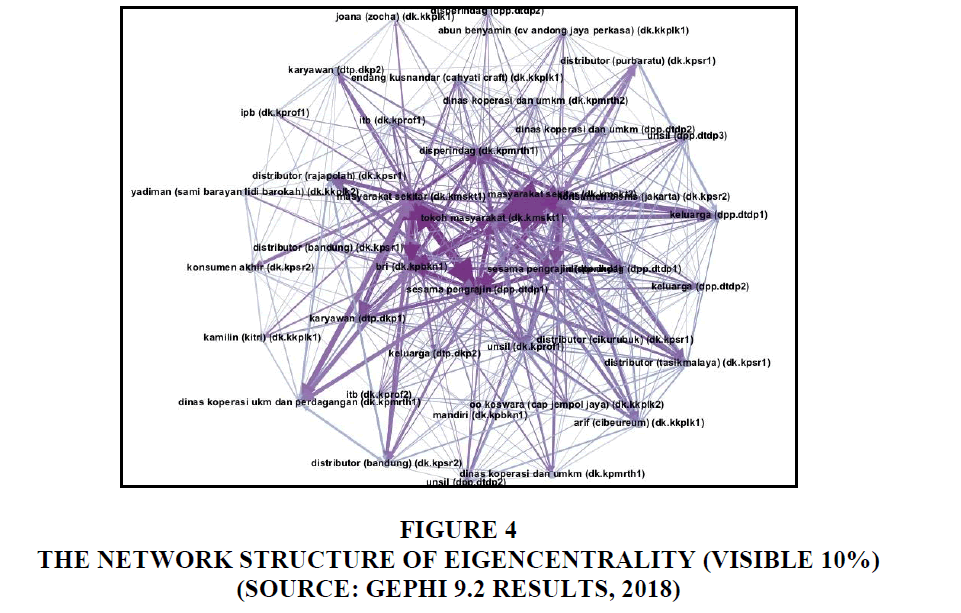 This finding is confirmed by the results of measurements in the previous dimension. The results are indicated by several connections: the ability to spread knowledge quickly, the position to directly mediate between two other actors, and the importance they hold as actors in the creative industry of the entrepreneurial ecosystem in the East Priangan Region.

The surrounding community members contribute to the success of business actors by playing a role in shaping the culture of entrepreneurship. Audretsch & Keilbach (2004) state that the entrepreneurial capital embedded in a region understands various legal, economic, institutional, and social forces, all of which affect the capacity of the local economy to produce new businesses. Entrepreneurial capital is defined as the contribution of regions, with factors conducive to the creation of new businesses. This finding implies the existence of a regional environment that encourages new business activities, such as innovative environments, the existence of formal and informal networks, the acceptance of the general social community for entrepreneurial activities, as well as the venture capital and bankers who are willing to share risks and benefits. Therefore, the regional environment can influence entrepreneurial activities through a shared culture or a set of formal and informal rules (Werker & Athreye, 2004).

We acknowledge the financial support from DRPMI of University of Indonesia for all process of this research.

Cohen, B. (2006). Sustainable valley entrepreneurial ecosystems.Business Strategy and the Environment,15(1), 1-14.

Dubina, I.N., Campbell, D.F., Carayannis, E.G., Chub, A.A., Grigoroudis, E., & Kozhevina, O.V. (2017). The balanced development of the spatial innovation and entrepreneurial ecosystem based on principles of the systems compromise: A conceptual framework.Journal of the Knowledge Economy,8(2), 438-455.

Fritsch, M., & Kauffeld-Monz, M. (2010). The impact of network structure on knowledge transfer: an application of social network analysis in the context of regional innovation networks.The Annals of Regional Science,44(1), 21.

Giuliani, E. (2007). The selective nature of knowledge networks in clusters: evidence from the wine industry.Journal of economic geography,7(2), 139-168.

Greenman, A. (2012). Entrepreneurial activities and occupational boundary work during venture creation and development in the cultural industries.International Small Business Journal,30(2), 115-137.

Jennen, T., Rigby, C., & Allum, J. (2016). Stakeolder Engagement in the creation of an entrepreneurial ecosystem.Journal of Asia Entrepreneurship and Sustainability,12(1), 3.

Krätke, S. (2010). ‘Creative Cities’ and the rise of the dealer class: A critique of Richard Florida's approach to urban theory.International journal of urban and regional research,34(4), 835-853.

Romarina, A. (2016). Economic resilience in creative industries to face globalization in the context of national resilience. Jurnal Ilmu Sosial, 15(1).

Spigel, B. (2017). The relational organization of entrepreneurial ecosystems.Entrepreneurship Theory and Practice,41(1), 49-72.