Since Shapero's seminal works thirty-five years ago (Shapero & Sokol, 1982) symbols the starting point at which the study on entrepreneurial intentions begins its current period of rapid growth. Prior studies show that entrepreneurial intention has been used widely as the best predictor of creating new venture (Ajzen, 1991). Some independent contributions emerge in the field of entrepreneurship, as more authors begin to identify the potential value of the intention approach (Bird, 1988).

The first model called Entrepreneurial Event Model (EEM) by Shapero & Sokol (1982), found that people answers to that external event will depend on their perceptions about the accessible alternatives. In addition, there are two basic kinds of perceptions, (1) Perceived desirability refers to the degree to which a person feels an attraction to become an entrepreneur and reflects individual’s preferences for entrepreneurial behaviour and (2) Perceived feasibility is defined as the degree to which people consider themselves personally capable of starting a business. It refers to the degree to which individuals are confident that they are personally able to start their own business and consider the feasibility to become an entrepreneur.

The second model called Theory of Planned Behaviour by Ajzen (1991) developed to explain entrepreneur behaviour. This is a theory that may be applied to virtually all voluntary behaviours and it provides quite good results in very diverse turfs, including the choice of professional career (Ajzen, 2001; Kolvereid, 1996). The theory of planned behaviour says that such “intentionality” is driven in part by three factors: perceived behavioural control or the perceived ease to “perform” entrepreneurial behaviour, the general attitude toward entrepreneurship or the extent to which a person has a favorable evaluation of entrepreneurship as a career and subjective norms or the perceived social norms that entrepreneurship is an “acceptable” career choice (Kolvereid, 1996b; Linan & Chen, 2009) (Figure 1). 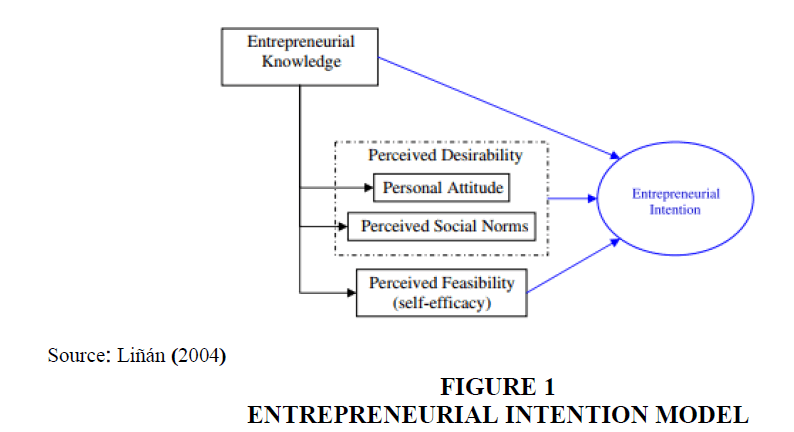 In the effort to combine the two models of TPB and EET which two models present a high level of mutual compatibility and overlapping models (Krueger et al., 2000; Linan, 2004). Linan (2004) offered a third model known as integrated Entrepreneurial Intention model (EI), which reflected a combination of antecedent’s entrepreneurial intentions from both TPB and EEM, we therefore rested our research using an integrated model of both earlier works on well recognized entrepreneurial intention model by Linan (2004).

In this study, we built the integrated theory from experiential learning theory and opportunity evaluation theory. While the previous studies have explained the theoretical applications of experiential learning in entrepreneurship (e.g. Pittaway and Cope (2007), Politis and Gabrielsson (2009) and Corbett (2005)), this study build the alternative approach by integrating (1) Experiential Learning Theory and (2) Opportunity Evaluation Theory together, to serve as an alternative theory that increase entrepreneurial intention (Table 1).

According to Foley (1995), the unique feature of experiential learning is that the experience of the learner position at central place in all considerations of teaching and learning. This experience may involve earlier events in the life of the learner, current life events or those arising from the learner's participation in activities implemented by teachers and facilitators. A key element of experiential learning (henceforth referred to as EL) is that learners analyses their experience by reflecting, evaluating and reconstructing it (sometimes individually, sometimes collectively, sometimes both) in order to draw meaning from it in the light of prior experience.

According to Allen (2012), this study defines ‘opportunity evaluation’ as the determination process of whether the business model appears feasible or not. Feasibility study is an expression in the economical and accounting sciences to simply define precise reviews and examinations to determine the feasibility of different investment alternatives by calculating costs and benefits to extract measurements for every alternative (Abou-Zeid et al., 2007). There are no specific methods to carry out feasibility studies for all types of projects; however, there are consensus actions to carry out feasibility studies in development phases (Abou-Zeid et al., 2007). Implementing a detailed feasibility analysis during the project planning process demonstrates how the development will operate under a specific set of assumptions (Matson, 2000) considering all economic and non-economic factors (Graaskamp, 1970). It is conducted at a key stage allowing for an informed go/no go decision on a proposed development before considerable investment is made. 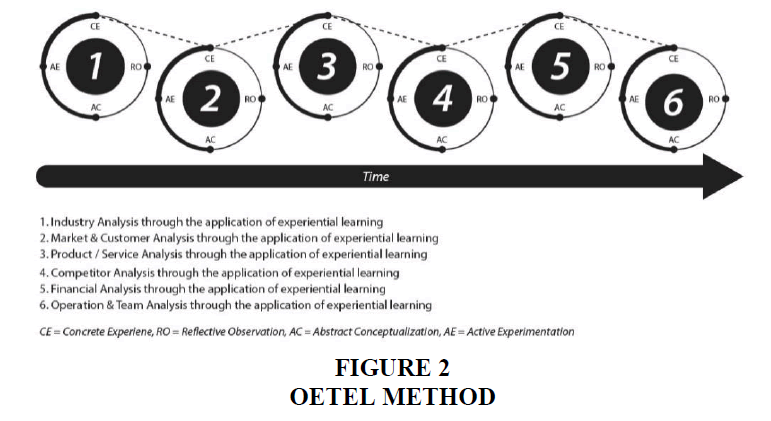 The conceptual model of this study is shown in Figure 3. In the model, entrepreneurial intention refers to one’s desire to start a business (Krueger et al., 2000). 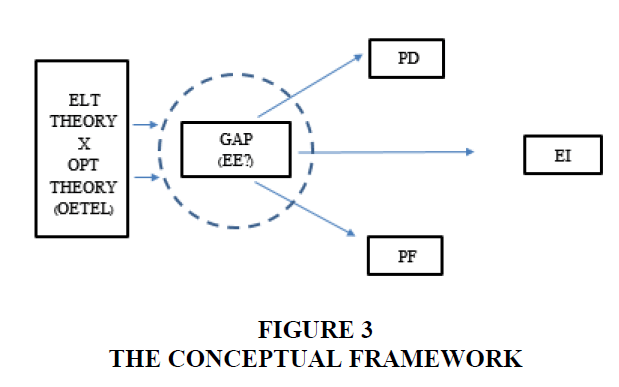 The OETEL is the simply the way of doing this experimental field work by integrating experiential learning setting for entrepreneurs to get firsthand information by examinee each dimension of opportunity evaluation within the structured framework of feasibility analysis. We propose this opportunity evaluation through experiential learning (OETEL) as a tool for entrepreneurs and investors to measure the worthiness of project in term of possibility the success, the future of project and worthiness rate of return. Therefore, in with the application of OETEL in entrepreneurial education, this study proposed three hypotheses.

H2 The effect of application of OETEL on Entrepreneurial Intention (EI) is mediated by Perceived Desirability (PD);

H3 The effect of application of OETEL on Entrepreneurial Intention (EI) is mediated by Perceived Feasibility (PF).

This research was conducted in the form of experimental design in the classrooms. Students who participated in the business and entrepreneurship related classrooms received OETEL which was delivered in the form of slide presentation and workshop by a lecturer. The experiment was designed in the form of pretest posttest-controlled group design. The objective of this study is to mainly test the effects of treatment (OETEL) on the group that received and did not received treatment. The total sample 60 students were used for proving hypothesis 1, as this first hypothesis acted as the first checking regarding the change in Entrepreneurial Intention. This total sample of 60 students was then separated into two groups: 30 of them received OETEL and others 30 of them did not receive OETEL. This was to test the effect of OETEL between the group received manipulation and the group received none.

Before analysing the first hypothesis with the purpose to understand whether having OETEL and not having OETEL effect Entrepreneurial Intention or not. The total participants of 60 business students participated in the hypothesis proving with pre-test–post-test controlled group experimental design. The participants were separated into two groups equally. The first group did not receive OETEL while the second group receive OETEL. Before operating experiment, both first group and second group did the survey questionnaire that aimed to measure their Perceived Desirability (PD), Perceived Feasibility (PF), Entrepreneurial Intention (EI). After the experiment, both of first group and second group also did the same questionnaire to measure whether there was any change with their measure their PD, PF and EI.

After completing questionnaire, One Way ANOVA analysis was performed on the scores of entrepreneurial intentions to compare mean differences between two groups. An analysis of variance showed that there is no significant difference between two groups (p= .656). It shows that, when considering the mean of both groups, the mean difference was not significant, as the mean of first group is 4.0778 and the second group is 4.1556. As follows, there is no significant in entrepreneurial intention before starting experiment.

After analysing whether the group that received OETEL will make a greater score than the group that did not received OETEL or not, the relationship of Perceived Desirability (PD), Perceived Feasibility (PF), Interracial Intentional (EI) and OETEL were considered and analysed afterward. The SPSS (PROCESS macro) which is a Versatile Computational Tool for Observed Variable Mediation, Moderation and Conditional Process Modelling (Hayes, 2012) were selected to operate on the application of OETEL through Viability (OETEL), Perceived Desirability (PD) and Perceived Feasibility (PF) as mediators and on Entrepreneurial Intention (EI) as the outcome of statistical model.

For educators, policy makers and university management; the findings supported the action based or experiential learning for entrepreneurship education over the traditional teaching style. Educators could try to strengthen entrepreneurship education with more experiential learning style such as start-up simulation, business plan and product launch. In terms of practical implication, the study provides valuable information and insight for those who will use such opportunity evaluation instrument for their business decision before the decision to go forward with investment implementation. In addition, the study found a practical process to formulate and deliver such training programs aimed at increasing the intention of entrepreneurs.

The results from the pilot and experimental study show that OETEL affects perceived desirability, perceived feasibility and entrepreneurial intention significantly. This study shows how the innovative learning application of experiential learning theory affects entrepreneurial intention. The would-be entrepreneurs who participated in research confirmed that both perceptions of the desirability and feasibility of starting a business have increased significantly.

The study measured the short-term effect of the OETEL and entrepreneurship education program on entrepreneurial intention. This study has shown that perceptions of both desirability and feasibility of starting a business are strongly influenced by opportunity evaluation through the experiential learning process. The result of this confirmed that entrepreneurship education has an impact on participants’ perceptions of starting a business.

Anthony, S.D. (2014). The first mile: A launch manual for getting great ideas into the market. Harvard Business Review Press.

Bagozzi, R.P., Baumgartner, J. & Yi, Y. (1989). An investigation into the role of intentions as mediators of the attitude-behaviour relationship. Journal of Economic Psychology, 10(1), 35-62.

Barreto, I. (2012). Solving the entrepreneurial puzzle: The role of entrepreneurial interpretation in opportunity formation and related processes. Journal of Management Studies, 49(2), 356-380.

Corbett, A. (2005). Experiential learning within the process of opportunity identification and exploitation. Entrepreneurship Theory and Practice, 29(4), 473-491.

Shook, C.L. & Bratianu, C. (2010). Entrepreneurial intent in a transitional economy: An application of the theory of planned behaviour to Romanian students. International Entrepreneurship and Management Journal, 6(3), 231-247.

Zainuddin, M.N. & Ismail, H. (2011). Push and pull factor in an entry into an employment route: A study of nurtured entrepreneurship students. International Journal of Entrepreneurship and Small Business, 13(4), 469-498.