The fluctuations in primary commodity prices have a significant impact on global economy. Therefore, forecasting price of major commodities prices has been getting much attention both from academic and practitioners' communities. The objective of this study is to develop a model based on group method of data handling (GMDH) technique in one day-ahead forecasting the market prices for major commodities including copper, crude oil, gas and silver. The data on commodities trading were collected from January 2000 to October 2019. In order to validate the effectiveness of the proposed model, other models based on adaptive neuro fuzzy inference system (ANFIS), artificial neural network (ANN), long short-term memory (LSTM) were also developed. The performance indexes including RMSE, MAPE, MAE, R and Theil’s U were used to make comparison of the models. The results showed that the proposed model based on GMDH technique outperforms than other methods in prediction of commodity prices. The GMDH-based model provides a promising alternative for price prediction. The GMDH can be a useful tool for economists and practitioners dealing with the forecasting of the commodity price.

Key international commodities have been traditionally considered as investment vehicles, traded goods across borders and account for a significant share of international trade. These commodities are considered as potential hedges from inflationary pressures; and monetary substitutes in the event of economic turmoil (Jubinski & Lipton, 2013). The export of primary commodities is an important source of foreign exchange for many nations and regions, especially developing countries, and commodity price movements and volatilities have been associated with investment activities, economic policy planning and formulation. Fluctuations in major commodity prices have a large impact on global economic activities such as commodity-related investments, project appraisals and strategic planning. Therefore, prediction of primary commodity prices with reasonable accuracy has received attentions of economists and practitioners (Husain & Bowman, 2004). Despite of research efforts, commodity price forecasting is still challenging full of volatility, uncertainty and complexity. Primary commodities including agriculture products, raw materials, fuels and base metals, that are extracted or harvested and also requires very little processing before consumption, account for over 40 per cent of world trade.

Referring to prior studies, several approaches have been proposed for forecasting price. These methods can be grouped into two main categories: (1) methods based on traditional econometric models including time series models, financial models, structural models, conventional regression analysis, and multivariate statistics such as Autoregressive Integrated Moving Average (ARIMA), Generalized Autoregressive Conditional Heteroskedasticity (GARCH) and Seasonal Autoregressive Integrated Moving Average (SARIMA) and (2) methods bases on soft computing techniques including artificial neural network (ANN), support vector machine (SVM), fuzzy logic and heuristic algorithms (Behmiri & Pires Manso, 2013). It is difficult to have a powerful forecasting model using traditional models since these models are derived from strong assumptions and knowledge of input data statistical distributions (Yazdani-Chamzini et al., 2012) and cannot capture the nonlinear patterns hidden in the price series (Yu et al., 2008). Various studies concluded that the artificial intelligence-based models outperform the statistical-based models in time series forecasting. In comparison with traditional econometric techniques, methods based on soft computing techniques (i.e, neural networks) provide a higher degree of robustness and have the capability to forecast volatility (Haidar et al., 2008; Kristjanpoller & Minutolo, 2015). For instance, the ANN is able to forecast with approximately half the mean square error of the econometric method, but both are equally adept at predicting turning points in the time series (Panella et al., 2012). Tapia Cortez et al. (Tapia Cortez et al., 2018) indicated that machine learning techniques have proved to have better performance for forecasting mineral commodity prices compared to all other techniques. The ANN and ANFIS-based models have been developed to predict the oil prices of the OPEC (Lofti & Karimi, 2014). The ANFIS with proposed variables set showed a higher accuracy. The LSTM-based models have been successfully applied to various applications in forecasting prices (Bakir et al., 2018; Jeenanunta et al., 2018; Qu & Zhao, 2019). The mentioned studies have shown the efficiency of the ANN, ANFIS, LSTM in price forecasting. Among computational intelligence techniques, the GMDH is a self-organized system which has the advantages in solving complex nonlinear problems (Amanifard et al., 2008; Ebtehaj et al., 2015).

The GMDH algorithm was first introduced in modeling complex systems in which have a set of data with a multiple inputs and one output (Ivakhnenko, 1971). GMDH has been proved as an effective method in many fields including data mining, knowledge discovery, prediction, optimization and pattern recognition (Teng et al., 2013; Teng et al., 2014). It was showed that GMDH neural network performed better than the traditional forecasting techniques such as single exponential smooth, double exponential smooth, ARIMA and back-propagation neural network (Li et al., 2017).

Our study focuses on forecasting prices of several primary commodities including copper, crude oil, gas and silver. The proposed models utilize historical data and several intelligence techniques to predict price of key international commodities. The best fit model is identified according to several performance criteria including RMSE, MAPE, MAE, R and Theil’s U. The contribution of this study is twofold. First, we develop an efficient forecasting model based on GMDH technique. The second contribution is to assess the accuracy obtained by different methods namely ANFIS, ANN, GMDH and LSTM in time series forecasting.

The GMDH model is a self-organized system which the structure optimized itself according to the data input. The GMDH neural network aims at constructing a function in a feed-forward neural network based on a second-degree transfer function. In the GMDH network, the number of hidden layers and the number of neurons with optimal deterministic transfer function are automatically determined. Accordingly, the optimal model structure is obtained. The relationship between the input and output variables is done by nonlinear functions including Volterra series and Kolmogorov-Gabor polynomial.

If a non-linear system has the input variables

(i.e., the lagged time series to be regressed) and the output variable . The relationship is as follows:

The function f can be expressed by the following Kolmogorov–Gabor polynomial:

Where n is the number of variables and

are coefficients in the polynomial. However, the quadratic form of partial descriptions for two variables is commonly used in the form:

An example of GMDH architecture is shown in Figure 1 when there are three layers and four inputs. Since there are four inputs, the number of neurons in a layer is calculated to be six. The coefficients are obtained by the use of equation. In each neuron, the desired output is predicted by the calculated coefficients and inputs. Based on mean square error (MSE) criteria, p neurons are selected and h-p neurons are removed. In Figure 2, four neurons are chosen while two neurons are eliminated from the network. The outputs obtained from selected neurons become the inputs for the successive layer. This step repeats until the last layer. At the last layer, only one neuron is selected. The output at the last layer is the predicted value. 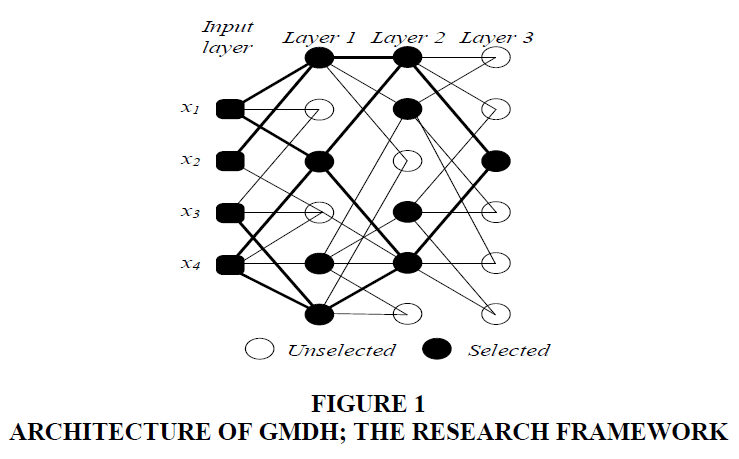 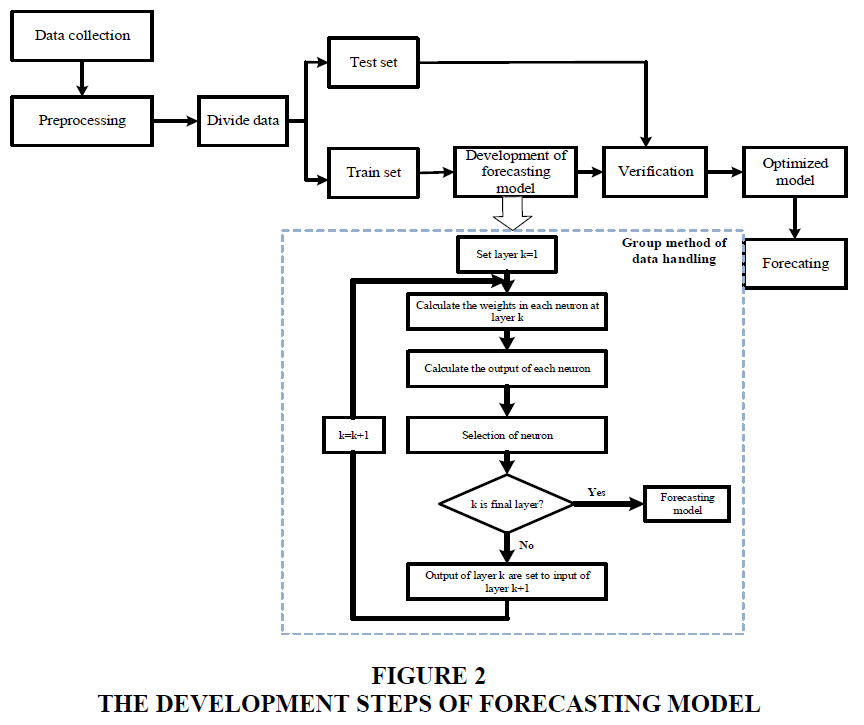 In this study, the research data are daily prices of key international commodities including silver, crude oil (Brent and WTI), copper, and gas from January 3, 2001 to September 30, 2019 (Figure 3). The data is divided into two datasets: the first dataset with 70% of the source data are used for the model development (training) and the other portion (30%) is for testing and evaluating the model. 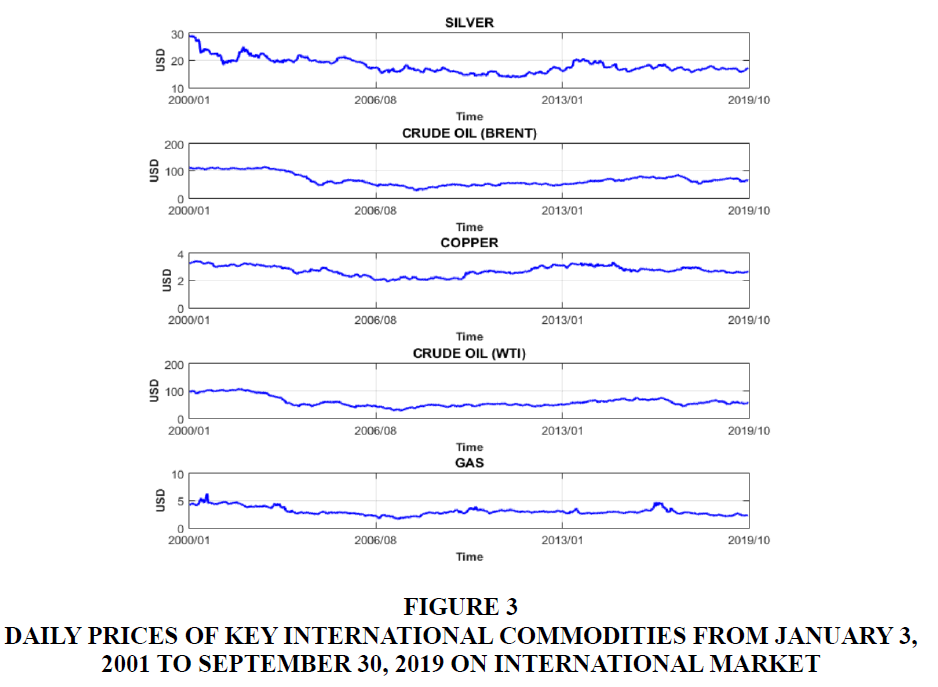 Other models were also developed to the research problem. For LSTM model, the number of layer was set equal to 5. The sequential structure with a linear stack of layers was applied to the model development. The main parameters were set as follows: the dimensionality of the output space is 50; the rectified linear unit was used as the activation function. The cost function was mean squared error (MSE) For ANFIS model, the grid partition method was used for FIS (Fuzzy Inference System) generation. In our study, two membership functions were chosen for each input in the model. The Gaussian membership function was used in ANFIS model. The membership function output is linear. Use lagged versions of the variable, five input variables are given

For ANN model, the multilayer perceptrons (MLP) was utilized in this study. The used MLP is feed forward fully connected network, with two hidden layers, along with Levenberg-Marquadt training algorithm. Two most commonly nonlinear and linear transfer functions sigmoid, and tangent, were used in first and second hidden layers, respectively. After a number of trials, the architecture of the MLP network for prediction was determined.

To evaluate the performance of the prediction model, several performance indexes were used. These criteria are applied to the developed model to know how well it works. The criteria were used to compare predicted values and actual values. They are as follows:

Root mean squared error (RMSE): This index estimates the residual between the actual value and desired value. A model has better performance if it has a smaller RMSE. An RMSE equal to zero represents a perfect fit.

Where tk is the actual (desired) value, yk is the predicted value produced by the model, and m is the total number of samples.

Mean absolute error (MAE): This index indicates how close predicted values are to the actual values. a model with a lower MAE means it has better performance.

are the average values of tk and yk, respectively.

Theil’s U-statistic: This index is an accuracy measure that emphasizes the importance of large errors as well as providing a relative basis for comparison with naïve forecasting methods. Theil’s equation is shown as below:

The U value is bound between 0 and 1, with values closer to 0 indicating greater forecasting accuracy.

Through these indexes, the quality (accuracy) of a forecasting model can be estimated by examining the inputs (assumptions) to the model, or by comparing the outputs (forecasts) from the model (Small & Wong, 2002). 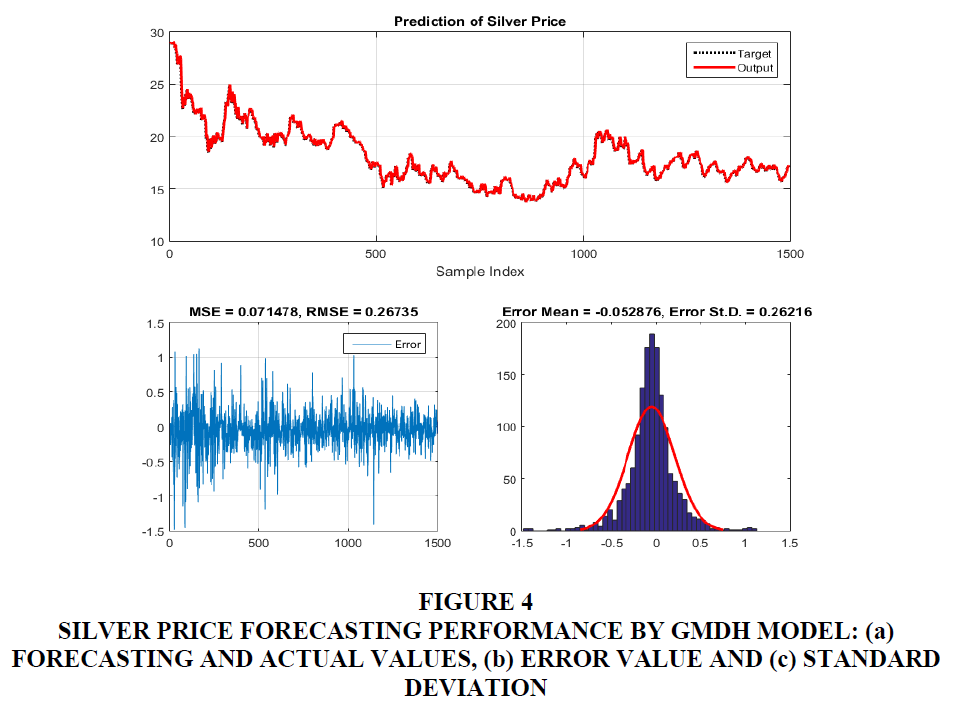 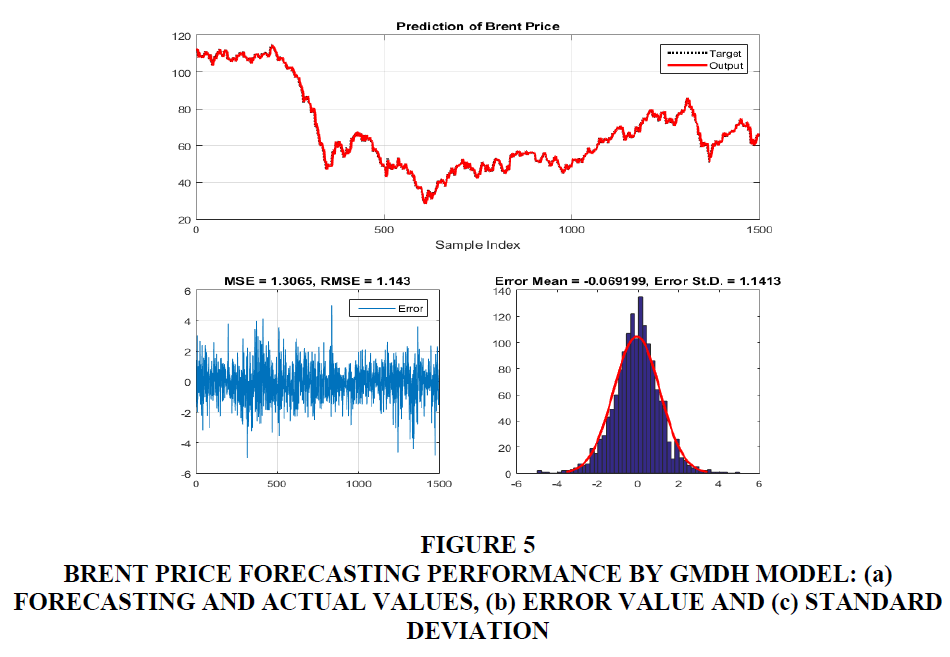 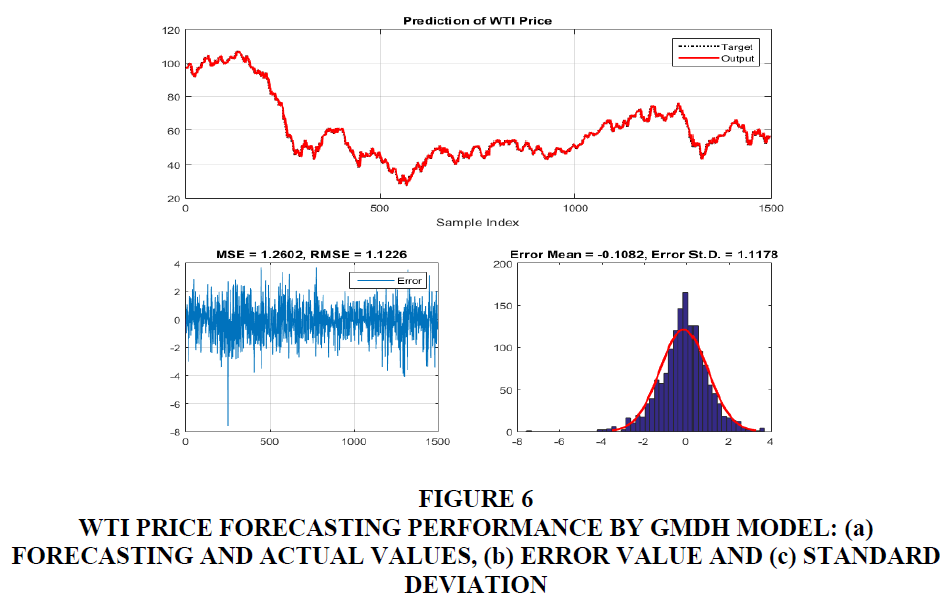 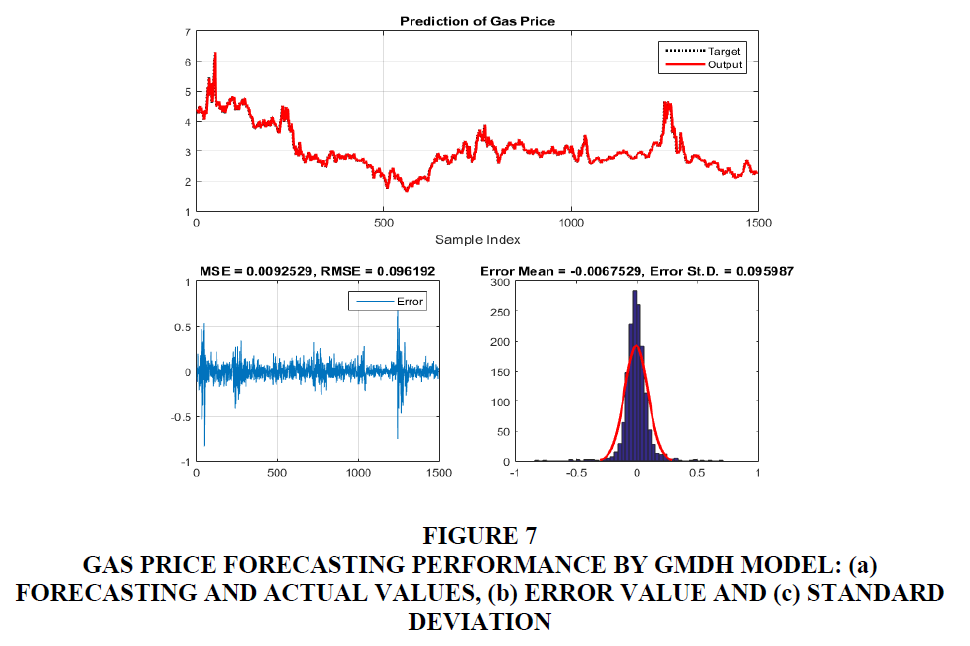 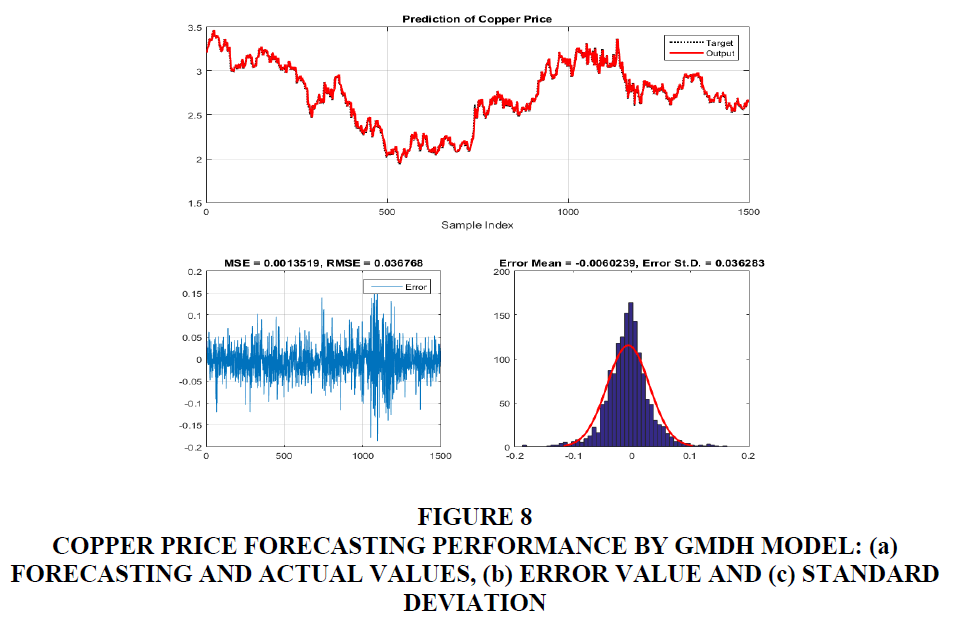 The comparison between actual values and corresponding output values obtained by the GMDH model are also shown in Figure 9. The figure presents scatter diagrams that illustrate the degree of correlation between predicted values and actual values. In the figure, the 1:1 line was drawn as a reference. In a scatter diagram, the 1:1 line represents that the two sets of data are identical. The more the two data sets agree, the more the points tend to concentrate in the vicinity of the 1:1 line. It may be observed that most predicted values are close to the actual values in Figure 9, and this indicates a good agreement between the forecasting values obtained by the GMDH model and the actual values. 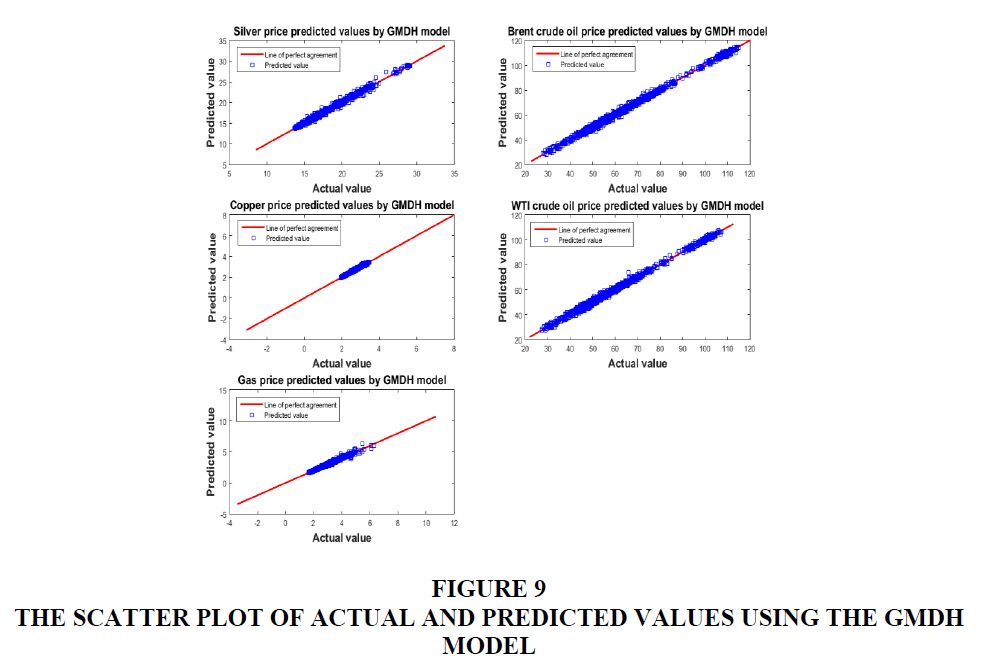 Financial time series, i.e., commodity price, has characteristics of classical nonlinearity and instability. In this study, we have developed a model based on GMDH technique for forecasting major commodity prices. In order to analyze and compare the ability of the GMDH, other models based on ANFIS, ANN, and LSTM were also applied to the forecasting problem. The simulation results verify the proposed model has better applicability for price time series forecasting. The study findings also demonstrate the forecasting potential of the GMDH in financial applications. The research findings are expected to provide an assistance and forecasting tool for managers and policy makers. Although the model was developed for a specific problem, it will have the potential to be used as a guide for other related problems. We also aspire that our approach can be applied to a great variety of practical problems which need to be solved by artificial intelligence techniques.