As the other countries of the world, insurance industry of Pakistan is facing the changes and has encountered multiple issues. At the time of independence in 1947, there were 84 insurance companies operating in Pakistan, dominant by the foreign insurance firms. In 1972, Government of Pakistan nationalized all the insurance firms operating in the country and merges them into the State Life of Pakistan. However there was a major breakthrough in the 1990s, the financial reforms took into place and these reforms allowed private and foreign companies to establish their business in the insurance sector (Malik, Malik and Faridi 2011; "State Bank of Pakistan", 2005).

Although, takaful concept was there even before the evolution of Islam. The first time it was introduced in Sudan in 1979 and later on in Saudi Arabia. Now takaful is operating its business in more than 22 countries and getting popularity in other regions (Qureshi, 2011). Majma-al-Fiqh, the Grand Council of Islamic Scholars, Saudi Arabia, approved takaful as an alternate to insurance according to the shari’ah ruling in 1985. Currently, Takaful industry has its global volume US $25 billion with only 305 takaful-retakaful operators and windows. However, it is worthwhile to note that the growth of takaful industry is 12% per annum which higher than the conventional insurance industry which is only 4% per annum ("Annual Islamic Financial Services Industry Stability Report", 2017).

The Council of Islamic Ideology in Pakistan reviewed the model and alters it for Pakistan’s financial sector according to the shari’ah rulings on 29th April 1992 (Khan, 2016). Later on, the Government of Pakistan issued “Takaful Rules 2005” on 3rd September 2005, an Islamic compatible takaful operational model ("Securities and Exchange Commission of Pakistan", 2016).

This paper provides an in-depth analysis of the productivity change in the efficiency, reasons for this change for the insurance and takaful operators in Pakistan for the period of 2008 to 2016. Efficiency measurement has been developed as one of the growing areas for the researchers and decision makers. The financial sector is very crucial for any country. The measurement of efficiencies and productivity change in the efficiency of the insurance sector become the core issue for the policy makers and researchers (Eling and Luhnen, 2010). As Takaful industry is an infant in Pakistan, the productivity change analysis has been relatively less discussed in this context.

Financial sector always remains the matter of discussion for the researchers. Numerous international studies on the efficiency and performance of financial services industries, especially banking sector have been done but only a few studies have discussed the insurance industry. The insurance industry is facing the multiple challenges like risk management, diversified increasing competition, consolidation and fluctuating regulatory sanctions. It became very important to calculate the efficiency and the productivity changes of the industry to determine the response of the industry towards the said challenges, which predicted the survival of the firm in the industry (Berger, Hunter & Timme, 1993).

For the insurance firms, it is key to look for methods and ways so that they can improve their performance because of consolidation, changing regulatory environment and increased in competition. All of these three factors have played a key role in the characterization of the insurance sector since few years. The available literature of efficiency shows that it has the same impact in emerging and developed economies. Evaluation of efficiency helps the insurance firms to improve or gain the competitive advantage over the competitors which is beneficial for the overall improvement of efficacy in the financial system.

Most reliable and commonly used approach to measuring the efficacy, efficiency and productivity of any industry is the frontier approach. This technique of measuring the efficiency allows responding the multiple outputs and inputs of the firms to develop the frontier and compare the DMU’s with the efficient firm. Berger and Humphrey (1997) made a survey of 130 studies conducted in 21 different countries of the world, which use the frontier techniques and concluded that there is two frontier approaches known as a Parametric approach (Econometric Frontier Approach) and non-parametric approach (mathematical programming approach). Stochastic Frontier Approach (composed error), the Thick Frontier Approach and Distribution-Free Approach (different composed error) are the famous parametric approaches. Whereas, Data Envelopment Analysis and the Free Disposable Hull are the non-parametric approaches (Cummins, Tennyson and Weiss, 1999; Cummins and Zi, 1998).

Among the abovementioned techniques, Stochastic Frontier Analysis (SFA) and Data envelopment analysis (DEA) is mostly been used in the insurance industry. Aigner, Lovell and Schmidt (1977) developed the SFA which can manage the relationship between inputs and outputs of the firm to measure the cost, profit and production frontier. It is important to mention that SFA also distinguishes the random error from inefficiency (Berger & Humphrey, 1997). This frontier technique is used to evaluate the distance of the firm from the optimizing envelope (Sealey & Lindley, 1977).

Farrell (1957) developed a mathematical model in 1957 by using single input-output technical for the measurement of technical efficiency. But the Data Envelopment Approach (DEA) based on mathematical programming was introduced by Charnes, Cooper and Rhodes (1978), later on, known as CCR model. This model was developed for measuring the relative efficiency and taking the set of decision-making units (DMU) and having the identical set of input and output variables while Banker et al. (1984) developed variable returns to scale (VRS). This approach produces the frontier curve of the ratio of multiple inputs and outputs through linear programming. It assumes that linear substitution is possible between observed input combinations on an isoquant.

Among the various reason which make DEA preferable are: First, DEA is consistent and faster to make the frontier decision than the SFA (Grosskopf, 1996; Kneip, Park and Simar, 1998), second, DEA make unbiased calculation of the productivity as compare to SFA and Finally, comparison between DEA and SFA results of financial companies evident that, despite the two methods yielding parallel results (Casu, Girardone and Molyneux, 2004). The DEA estimates are more highly correlated with conventional performance measures (Cummins and Zi, 1998).

DEA has the ability to combine the results of input and output of a firm into productive efficiency which lies between zero (inefficient) and one (maximum efficient). Furthermore, through the results of the linear estimates by which the observed data is bound, the frontier is effectively estimated by DEA (Leong et al., 2003). DEA is a unique technique which ‘envelop’ the inefficient firm by producing the frontier of the efficient firm for the same input and output combination (Neal, 2004).

The results showed the high growth for the insurance sector and this growth was escorted by continuous development in the technical efficiency over the period of 2005 to 2007.

Malmquist Index is used in this study to measure the change in total factor productivity (TFP) change index over time. This index estimated the changes in production unit in two ways, change in production frontier with respect to technology (TCI) and second is a change in the efficiency frontier over the period of time (TECI). The other available methodologies for measurement of productivity change are the Fisher and Tornqvist indices; however, Malmquist Productivity index (MPI) is adopted because it allows separating the technical efficiency change from the technological change and also consistent with the Data envelopment Approach and both use the linear programming to measure the distance function (Färe, Grosskopf, Lindgren & Roos, 1989).

There are radial and non-radial measures of calculating the Malmquist productivity index (MPI). Since the radial measures suffer from neglecting the slacks, this article use input-oriented DEA and MPI slacks-based non-radial model. The MPI estimates changes in efficiency of a DMU amongst two time periods and defined as under,

The catch-up (recovery) reflects the degree of efforts attained by a DMU for improving its efficiency, while the frontier-shift (innovation) term reveals the change inefficient frontiers surrounding the DMU between the two time periods say 1 and 2. The DMU0 at time period 1 is symbolized by

while at time period 2, it is denoted by

. The catch-up effect is

When C>1, it indicates increase efficiency from, if C =1, it reflects the no change while C <1 refers to a decline in efficiency. The frontier-shift effect at

is described as follows:

. The first two terms replicate the changes w.r.t same time period, while the last two terms show the comparison over time. MPI>1 indicates improvement, while MPI =1 indicates status in quo and MPI<1 refers to a reduction in the total factor productivity. It would be pertinent to mention here that the MPI was calculated by using the non-radial measure of DEA where the outliers were excluded from the analysis to ensure normality of results.

The improvement in productivity index of insurance firms was especially due to the three companies, for example, Atlas insurance, Efu-General insurance and State Life Insurance. State Life Insurance is the largest insurance company in the country and owned by the Government of Pakistan. Whereas, Dawood Takaful, Pak-Kuwait and Pak-Qatar secure the average 39%, 37% and 17% productivity increased respectively in the takaful sector.

Figure 1 explains the Total Factor Productivity Change trends of the industry. It is evident from the figure that except 2015, takaful operators showed the better productivity than the conventional insurance firms. Although the takaful operators are new in the market, they performed well in the study period with respect to their conventional counterpart. Every year they showed the improvement in their productivity. 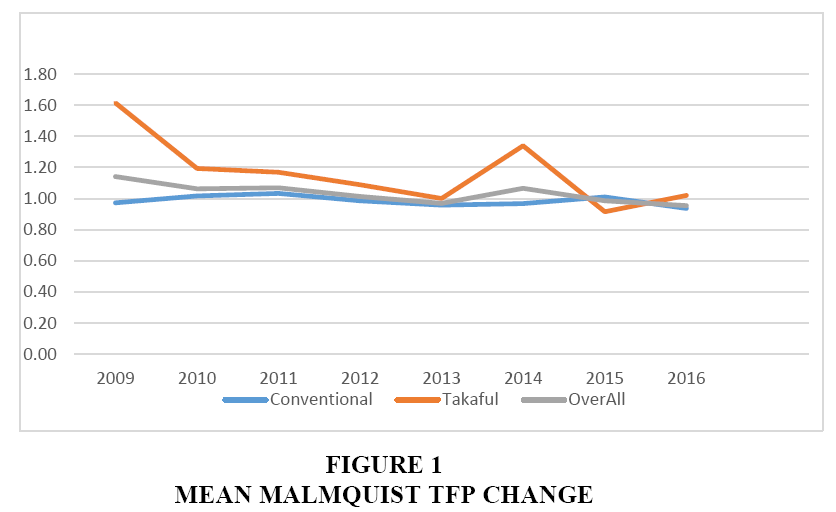 The Technology change Index was positive for conventional insurance companies till 2013 which was 2%, 13%, 37% 21% and 2% for the understudy period. However, the takaful industry improved its technology index, i.e., 27%, 7%, 9%, 10%, 1% and 38% respectively from 2009 to 2014. The decline in technology change of 2%, 12% and 9% respectively for 2014-2016 was recorded respectively for the insurance industry. While takaful operators’ observed 9% and 5% in 2015 and 2016. AdamJee Insurance was most technological efficient amongst the Insurance companies furthermore, Pak-Qatar (Family) and Pak-Kuwait were efficient amongst the Takaful companies.

Scale efficiency change index defines the change in the efficiency due to the adaptation of the firm with modern technology, liquidity, the optimal level of capital; fulfil the requirement of new technology and IT etc. Insurance industry only improved its Scale efficiency change index in 2015 and 2016 by 10% and 11% respectively. Although takaful operators are in their infancy stage which is also a major constraint in obtaining the scale efficiency takaful operators improved their index by 17% and 2% in 2009 and 2010 respectively and have shown constant behaviour for the rest of the period.

Alhassan, A.L. & Biekpe, N. (2015). Efficiency, productivity and returns to scale economies in the non-life insurance market in South Africa. The Geneva Papers on Risk and Insurance Issues and Practice, 40(3), 493-515.

Malik, M.S., Malik, A. & Faridi, M.Z. (2011). An analysis of e-insurance practices in Pakistan: Current status and future strategies: The case of a state owned Pakistani company. International Journal of Business and Management, 6(2), 125.