This study the first of its kind in the chosen context examined whether a relationship exists between tax avoidance and key financial indicators in the construction waste disposal industry in Korea. The indicators of interest were cash flows from operations, the ratio of noncurrent assets to noncurrent financing (shareholder equity and noncurrent liabilities), and debt dependency level. The model used for the analysis was Desai & Dharmapala’s tax avoidance proxy model. Results showed that cash flows from operations and the ratio of noncurrent assets to noncurrent financing are significantly positively related to tax avoidance. By contrast, debt dependency level exhibits no significant relationship with the aforementioned practice. On these bases, we can infer that the Korean construction waste disposal industry responds differently to key financial indicators with regard to tax avoidance. Overall, companies in the industry implement tax avoidance strategies on the basis of their ability to generate operating cash and noncurrent assets-to-noncurrent financing ratio rather than debt dependency. These findings provide important insights for people who are interested in tax information on the construction waste disposal industry in Korea.

The management of various types of waste is essential to ensuring a sustainable environment. In the Korean context, consciousness regarding waste management has sharply increased because of the worsening environmental problems caused by waste and the air pollution stemming from vehicles, factories, and dust transmitted from overseas. According to the 2017 White Paper of Environment released by the Korean government, the annual volume of waste in the country increased from 95 million tons in 2001 to 153 million tons in 2015, reflecting a cumulative annual growth rate (CAGR) of 3.4%. During this period, construction waste in particular increased to an even higher volume at a CAGR of 4.5% because of city redevelopment and investment in social infrastructure. Construction waste accounted for more than 53% of Korea’s total volume of waste in 2015. These issues highlight the considerable importance of managing construction waste in an environment-friendly manner.

Kim & Im (2017) defined tax avoidance as a concept that encompasses all company activities designed to reduce tax burdens, regardless of legitimacy; whereas tax saving is a legal and rational tax reduction activity, tax avoidance is an illegal practice that includes fraud, the nondisclosure of profits, and the inflation of expenses. Companies are strongly incentivized to minimize tax expenses because their financial performance is measured on the basis of return on equity earned through net income, which corresponds to earnings after tax expenses (Choi & Kweon, 2015).

Book-to-tax differences (BTDs) have been grown, as claimed by Plesko (2016). This claim, however, has been countered or qualified by other researchers. Manzon & Plesko (2002), for example, asserted that increasing BTD is not due to tax avoidance. Although Desai (2003) agreed that BTDs originate from a company’s tax avoidance behaviors, the author indicated that they also arise from differences in financial accounting and taxation rules with respect to depreciation methods, employee compensation, and overseas income under tax and financial accounting. Graham & Tucker (2006) showed that tax avoidance accounts for about 9% of total assets in the US. Desai & Dharmapala (2006) developed an estimate for a tax avoidance proxy by using BTD as basis. The authors estimated tax avoidance and controlled for the earnings management effects of total accruals under the assumption that BTD is a combined effect of earnings management intended to increase book income and tax avoidance designed to minimize taxable income. Choi (2002) showed that earnings management and BTD are negatively and positively related to tax avoidance, respectively.

With respect to tax avoidance methods, Frank, Lynch & Rego (2006) explained that the most ideal is to use strategies that do not affect book income but reduce taxable income. Plesko (2006) mentioned that using permanent difference is more favorable than using temporary difference as an approach to tax avoidance given that the former exerts no future reversal effect. Both the understatement of revenue and the overstatement of expenses reduce taxable incomes and tax expenses, but understating is a less-favored strategy for tax avoidance because revenue is a corresponding party’s expense. Koh, Kim & Choi (2007) demonstrated that overstated expenses are extensively constituted by material costs, labor costs, and noncapitalized R&D expenses. Regardless of method, the incentives of companies to exercise tax avoidance can differ, depending on a firm’s financial situation and characteristics. In connection with the statement of financial position items, companies with high asset sizes tend to more frequently practice tax avoidance as they have enough resources to perform tax avoidance planning (Kim & Jeong, 2006; Choi, Koh & Jo, 2007). Other researchers, with the exception of Graham & Tucker (2006), explained that firms with high debts less frequently practice tax avoidance because they can reduce tax burdens by registering interest costs as expenses (Koh, Kim & Choi, 2007; Choi, Koh & Jo, 2011; Lee & Hong, 2015; Yang, 2014). Capital-intensive firms also implement tax avoidance strategies to a lesser extent given the availability of other opportunities to reduce taxes through investment tax credits. In relation to income statement items, firms that earn high profits and incur high tax burdens more frequently implement tax avoidance to reduce their tax expenses (Frank, Lynch & Rego, 2006; Koh, Kim & Choi, 2007; Kim & Jeong, 2006). By contrast, firms with substantial tax benefits tend to less frequently engage in tax avoidance because they have sufficient tax savings (Frank, Lynch & Rego, 2006; Kim & Jeong, 2006). Firms with financial deficit engage more often in tax avoidance to generate cash (Kweon, Kang & Kim, 2009). In the matter of cash flows, operating cash flows and prior-year free cash flows have a negative relationship with tax avoidance (Lee & Hong, 2015; Choi & Kweon, 2016). Other studies indicated that a high ratio of noncurrent assets to noncurrent financing (shareholder equity and noncurrent liabilities) tend to increase tax avoidance and that high capitalization of R&D expenses is negatively related to tax avoidance.

The rest of the paper is organized as follows. Section 2 is a review of the literature on tax avoidance and related financial indicators. It also presents the reasoning that underlies our hypotheses. Section 3 discusses our research methodology, and Section 4 describes the descriptive statistics of the variables used in this work, the correlations that we derived, and the results of an empirical test. Section 5 concludes the paper.

The sample consisted of Korean construction waste disposal companies that disclose their financial results in the DART system of the Korean Financial Supervisory Service’s website. We obtained a list of companies from Korea Investors Service, which is a credit rating agency in Korea, and excluded firms whose annual financial data span a period of less than 11 years. The data obtained from the sample comprised 11-years annual data covering 2006 to 2016 for 23 companies, and the final dataset consisted of 253 firm-year observations.

Definitions and Measurements of Variables

As previously mentioned, this study inquired into the relationship between certain key financial indicators and tax avoidance in the construction waste disposal industry of Korea. For validation, we adopted equations (3) to (5), for which BTD was used. The major independent variables used were cash flows from operations (CFO), noncurrent assets-to-noncurrent financing ratio (NCFIN), and debt dependency (DEBT). CFO was measured by dividing CFO by beginning total assets for standardization. NCFIN was measured by dividing noncurrent assets by noncurrent capital, including shareholder equity and noncurrent liabilities. DEBT is the financial ratio of total debts against the sum of total liabilities and shareholder equities. This ratio serves as an indicator of a company’s financial health and profitability. 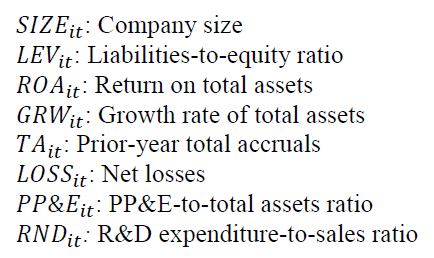 Effects of Cash Flows from Operations on Tax Avoidance

Table 3 presents the results of the hierarchical regression analysis for Hypothesis 1, which revolves around the effects of CFO on tax avoidance in the Korean construction waste disposal companies during the analysis period. In step one, we used various control variables. Table 3 shows only the results of step 2 given space limitations. CFO’s effects on tax avoidance are statistically significant at the 1% level. The R2 value of TAXAVOID is 0.492, which explains 49.2% of TAXAVOID. The tolerance of the variables and the variance inflation factor (VIF) are close to 1, indicating the near-absence of multicollinearity.

The coefficient of CFO as an independent variable for TAXAVOID is 0.254, which is statistically significant at the 1% level. This finding implies that companies with high cash generation tend to more aggressively implement TAXAVOID than do companies with low cash generation. This result contrasts with that on Hypothesis 1 with respect to a negative relationship between cash flows from operations and tax avoidance. This difference suggests a different response from the industry to cash flows from operations. Among the control variables, the effects of ROA and PP&E on TAXAVOID are statistically significant at the 1% level.

Effects of Noncurrent Financing for Noncurrent Assets on Tax Avoidance

Table 4 provides the hierarchical regression analysis results for Hypothesis 2, which revolves around the effects of noncurrent financing for noncurrent assets on tax avoidance in the construction waste disposal companies. As with the analysis for Hypothesis 1, step 1 involved the use of various control variables, but Table 4 shows only the results of step 2 because of space limitations. With respect to TAXAVOID, excluding the effects of the control variables, NCFIN’s contribution to the overall explanation for TAXAVOID is statistically positively significant at 5%. The tolerance level of the variables is closer to 1 than 0, and their VIF level is nearer to 1 than 10, thus demonstrating the near-absence of multicollinearity.

Table 5 shows the results of the hierarchical regression analysis for Hypothesis 3, which pertains to the effects of DEBT on tax avoidance in the construction waste disposal companies. Again, step 1 involved various control variables, but only the results of step 2 are presented in the table given space limitations. The tolerance levels of all the variables are closer to 1 than 0, and their VIF levels are closer to 1 than 10, demonstrating that almost no multicollinearity issue occurred in our analysis.

DEBT for avoidance is statistically nonsignificant at 5%, which deviates from the result of Kim & Lee (2015) and Hypothesis 3. The study showed that debt dependency level negatively affects TAXAVOID. Thus, the effects of leverage on tax avoidance may need additional investigation in the context of the construction waste disposal industry. The coefficient of ROA is 10.014 and is significant at the 1% level, and the coefficients of TA and PP&E are significant at the 5% level.

Our results indicated that incentives for tax avoidance differ depending on financial indicators. Looking into cash flows from operations enabled us to determine the possibilities that characterize tax avoidance by construction waste disposal companies in Korea. When companies have high operating cash flows, they implement tax avoidance. This result contrasts with our hypothesis and the findings of a previous study. Unlike that study, the present work determined that debt dependency level has a statistically nonsignificant relationship with tax avoidance in Korea’s construction waste disposal industry. As the first endeavor of its kind, the present research’s results can provide insights for those who are interested in accounting and tax information on the aforementioned industry. Especially, the Korean National Tax Service can identify potential tax avoidance activities of the Korean construction waste disposal industry by looking into the key financial indicators of the industry based on this study. In addition, the management of the industry association can see how the companies of the industry behave in connection with the tax avoidance under different financial indicators and they can set up a measure to avoid a potential bad reputation of the industry caused by the tax avoidance if necessary.

Similar to other studies, this research has certain limitations. We used only 253 firmyear observations because a small number of companies in Korea’ construction waste disposal industry disclosed their financial conditions on the Korean Financial Supervisory Service’s website. Accordingly, this limits the generalizability of our findings. Researchers can expand our work by including more data as the Korean government strengthens its financial disclosure system. Researchers can also extend tax avoidance studies to other industries for comparison and for the identification of characteristics that are unique to the tax avoidance practices of Korea’s construction waste disposal industry.

This research was supported with financial aid from Incheon National University.