The purpose of this study is to examine the influence of moderating effect of working capital in the influences of sales and operating cost on net profit. The population is the consumer goods manufacturers listed in Indonesia Stock Exchange (IDX) period 2015-2017. Sample selection method used purposive sampling and obtained 23 consumer goods manufacturers. This research used secondary data that obtained from the annual financial statement of manufacturing sector in IDX. Data analysis is conducted through regression analysis by utilizing the Moderation of Absolute Difference Method using software SPSS version 22. The result showed that partially, the variables of sales and operating cost have a positive and significant effect on net profit. This study empirically proves that working capital is a moderating variable capable of moderating the influence of the sales and operating cost variables on net profit in manufacturing companies.

In general, the company established has a target or goal to be achieved. Although the goals between one company and another company are different, but the main goal of a company is to get maximum profit (Smith et al., 1987). According to Cashmere (2015), the ultimate goal to be achieved by a company that is most important is to get a profit or maximum profit, besides other things. Profit is the difference between income over expense related to its business activities, used as the indicator of company’s continuity so that the company's operational activities can run smoothly. Profit obtained is an indicator that can be used to measure the company's financial performance and can be used as a basic for determining the company performance for a period (Warren et al., 2011). Figure 1 showed the average of net profit in consumer goods manufacturers listed in IDX during 2015-2017.

Figure 1 showed that the average level of net profit from year to year has changed. Net profit of consumer goods manufacturing fluctuated every year. From the graph above, it is known that in 2016 net profit increase from the previous year, while in 2017 the net profit drastic decline from previous year. Thus, indicating that the condition of the company is not in a favorable condition. To find out the success of a company in obtaining net profit can use the total of working capital owned by company. Working capital is the one component that available in the company that used to operate the company activities. Working capital is also reduce risk and increase profit. Aside from increasing in working capital, the profit of company also affected by other factors, namely sales. Sales is the company activities and the main source of the company income. Teratai (2017) outlined there is a close relationship regarding sales to the increase in the company's net profit in this case can be seen in the company's income statement, because in this case the profit will arises if the sale of products is greater than the costs incurred. To carrying out the company activities, a company will not be separated from the cost or operating cost incurred, because the cost is a sacrifice of the company in order to obtain profit. Jusuf (2014) state that a company can reduce operating costs, to increase net profit. Likewise, vice versa, if there is a waste of costs (such as excessive use of office equipment) will result in reduced net profit.

The Influence of Sales (X1) on Net Profit (Y)

H1: There is a significant effect of sales on net profit in Indonesian manufacturing companies.

The Influence of Operating Cost (X2) on Net Profit (Y)

The Influence of Working Capital on Net Profit 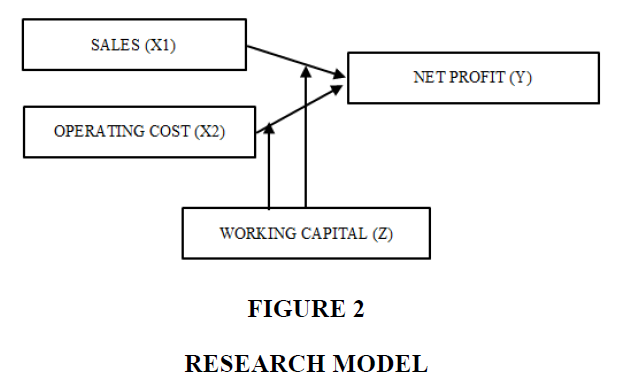 H3: Working Capital is able to strengthen the positive effect of sales on net profit.

H4: Working Capital is able to weaken the negative effect of operating cost on net profit

The population in this study is the consumer goods manufacturers listed in the Indonesia Stock Exchange period 2015-2017. This research sample was taken by purposive sampling technique. Based on the sampling criteria, the total samples used in this study were 23 companies.

The method of data analysis in this study is regression analysis with The Absolute Difference Method. There are conditions that should be fulfilled before the regression analysis, namely classical assumption test that consist of normality test, multicollinearity test, autocorrelation test and heteroscedasticity test. Hypothesises were tested in the form of partial and simultaneous effects. Partial hypothesis testing is done by t-test, while simultaneous testing is done by the F-test.

Equation function in this study is formulated as follows:

The results of the descriptive statistical test are shown in Table 1.

Table 2 showed a significant Kolmogorov-Smirnov value at 0.200>0.05. Thus, the residuals for data are normally distributed or have met the assumptions of normality. In addition, multicollinearity test aims to test whether the regression model found a correlation between independent variables. The results of the multicollinearity test were shown in Table 3.

Table 3 showed that it has tolerance value of variables are more than 0.1 and the VIF are also have value between 1-10 so there is no multicollinearity in these variables. Autocorrelation test is a test aims to test whether in the linear regression model there is a correlation between the error in a period with the period before. The Durbin Watson value is 2.134 and this value is compared with the table value using a significant value of 5%, the number of samples of 69 (n) and number of independent variables (k = 3). The Durbin Watson value showed du value is 1.7015< 2.134 < 2.2985 (Table 3). Moreover, the moderating regression analysis was conducted. First analysis was to perform moderation test effect of sales (X1) to net profit (Y) moderated by working capital (Z) (Table 4).