This research is a causal quantitative research based on the Unified Theory of Acceptance and Use of Technology model. The object of this study is students who take online learning programs. Data collection methods use primary data by distributing questionnaires. This research uses respondent consists of 365 students from various online learning study programs. The results of this study are that variables: performance expectancy, effort expectancy, quality of service, and personal innovativeness affect the behavioural intention, while the influence of lecturer has no effect on behavioural intention. Besides behavioural intention influences use behaviour while facilitating condition has no effect on use behaviour.

The need for online learning today is growing rapidly. A study conducted by Best Colleges.com (2017) states that the demand for online learning to grow, along with various needs that exist in modern society today. The reasons why chose online learning, such as: existing commitments do not allow for attendance in campus-based courses, alumni going back for more, employer incentive or partnership, and etc. Many students also the typical of working while going college students. They pay tuition fees from work. Burton & Goldsmith (2002) stated that for this kind of student, mostly within a week, online learning activities are conducted at most on two-day weekends, Saturday and Sunday. The learning time used of approximately 15 hours per day divided into 3.5 hours for reading, 2.5 hours for formal report and 2 hours for individual project.

The phenomenon of the development of online learning is also rapid, not least in Indonesia. As one of the most populous countries in the world, Indonesia's demand for education is also high. Data from Indonesia Open University (Universitas Terbuka, 2017), which is the public university of the pioneer provider of online learning in Indonesia, said that as of December 2017 the number of students is 287,823 people. The number is fantastic because many other countries in the world that even the total population is not up to that number. This amount does not include the number of online learning students at other public and private universities in Indonesia. A report from Dewi (2018) said that 165 campuses will apply online lectures, consisting of 51 existing universities and 114 new ones starting.

Online learning has the requirements and needs of facilities and infrastructure different from conventional lectures. Online concepts that do not recognize the limits of distance and time, requires facilities and technologies that support long distance communication, such as: Learning Management System that easily accessible, video conferencing for distance-to-face lectures, downloadable courses, and more (Ain et al., 2016). Previous research by Diep et al. (2016) stated that one-third learners are lurkers. Lurkers in online learning means not participate or give significant contribution either to topic discussion, nor personal or team project assignment. Online learning described as lack of technical literacy and social interaction (Tarhini et al., 2016). If the problems persist, online learning is thus considered an easy way to graduate and earn an academic degree. This will be detrimental to the alumni of online learning, because they will bear the stereotype.

According to Xin (2004) Quality of Service (QoS) becomes one of the important determinants for the success of online learning. Lee et al. (2011) stated that the excellent or better of the quality of service offered to students can be a factor that makes them accept e-learning. Lee et al. (2011) define quality of service as student's perception of support, course satisfaction, and learning outcomes. While student's perception of support is divided into four dimensions of construct: student support, instructional support, peer support, and technical support.

A study by Abu-Al-Aish & Love (2013) based on Unified Theory of Acceptance and Use of Technology (UTAUT) stated that the following factors affect the behavioural intention and use of behaviour to use online learning that is: performance expectancy, effort expectancy, influence of lecturers, quality of service and personal innovativeness. Based on that background, the main purpose of this research is to study on student acceptance of e-learning for higher education in Indonesia.

Unified Theory of Acceptance and Use of Technology

UTAUT is basically the development of the Technology Acceptance Model (TAM) developed by Davis (1989). Davis (1989) stated that people's desire to use information technology is based on the influence of perceived usefulness, perceived ease of use and through attitude toward use. In accordance with TAM, UTAUT developed by Venkatesh et al. (2003), which explain that use behavior of information technology influenced by performance expectancy, effort expectancy, social influence, and facilitating condition. Three of the independent variables (PE, EE, SI) will go through intervening variables of behavioral intention, while facilitating conditions directly impact the use behaviour. Venkatesh et al. (2003) adding moderating variables in the scheme of research, interesting is that the moderating variable is the nominal data are: gender, age, experience and voluntariness of use. Venkatesh et al. (2003) uses this nominal data to understanding the characteristic of different user group.

The population in this study is the number of active students in online learning program and long distance learning at the university where researchers work. The number of active students is 4000 students. For the sample in this study used the formula simplified formula for proportions developed by Yamane (1967). Level of precision in this research is 5% or 0.05, because the confidential level is 95%. These numbers are widely used in social science research (Israel, 2003). According to Yamane Formula above, the sample calculation as follows:

The hypotheses in this study are arranged as follows:

H1: Performance Expectancy has a significant effect on Behavioral Intention.

Based on preliminary research that has been made by previous researchers, the results of this hypothesis are divided into two groups, which is research that says that performance expectancy influences behavioural intention (Venkatesh et al., 2003; Chan et al., 2015) and that says otherwise, the result of the study by Cadinu et al. (2003) and Wu et al., (2012) i.e. there is no significant influence.

H2: Effort Expectancy has a significant effect on Behavioral Intention.

When referring to the grand theory proposed by Venkatesh et al. (2003) the effort expectancy, it surely influences behavioural intention. However, preliminary research that has been made actually shows the opposite results, many researchers have found that effort expectancy has no effect on behavioural intention (Handoko et al., 2018; Foon, 2014; Kaneberg & Zehra Jönköping, 2016; Mansour, 2016).

H3: Influence of lecturer has a significant effect on Behavioral Intention.

Influence of lecturer originally was a variable derived from social influence variable. According to the theory by Venkatesh et al. (2003), supported by Abu-Al-Aish & Love (2013) and Ghalandari, (2012) states that this variable has a significant effect on behavioral intention. But there are many other researchers who get the opposite results (Handoko et al., 2018; Foon, 2014; Kaneberg & Zehra Jönköping, 2016).

H4: Quality of Service has a significant effect on Behavioral Intention.

H5: Personal Innovativeness has a significant effect on behavioural Intention.

Based on preliminary research made by Bartels & Reinders, (2011) said that personal innovativeness has significant effect on behavioural intention. This is based on an idea that innovative students want to try lectures online. Therefore other researchers (Chen, 2014) found that personal innovativeness did not has significant effect on behavioural intention. According to this findings, this research want to test, whether the results of the study will strengthen the results obtained by Bartels & Reinders (2011) and Chen (2014).

H6: Facilitating Condition has a significant effect on Use Behaviour.

According to research conducted by Kim-soon et al. (2015), facilities affect someone to adopt technology. Its application in online-based higher education is when the campus provides adequate facilities for its students. This premise is supported by Raman et al. (2014), therefore other researcher got the opposite result (Mousa Jaradat & Al Rababaa, 2013).

H7: behavioural Intention has a significant effect on Use Behaviour.

The complete hypothesis in this study can be referred in Figure 1. 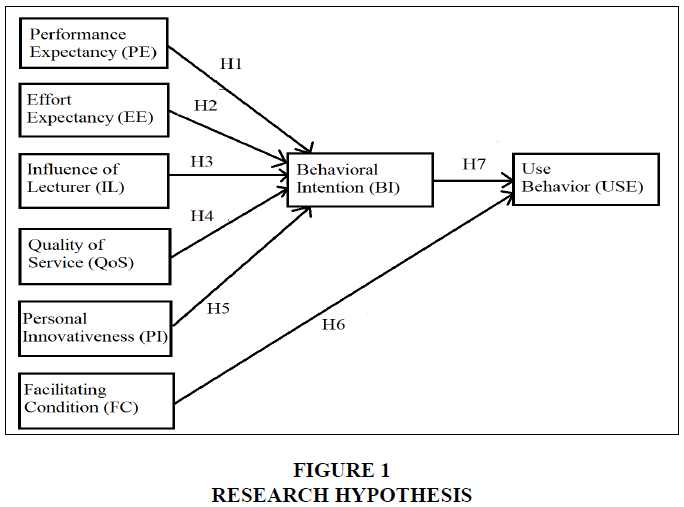 Based on the results of the data processing in Table 1, it can be seen that the variable Performance Expectancy (PE) has a sig value of 0.000 smaller than 0.05 and a calculated t value of 6.081 which is greater than the value of t table 1.99, the H1 hypothesis is accepted, Performance Expectancy has significant effect towards behavioural Intention. This result is in line with preliminary research that has been carried out by Chan et al. (2015); Venkatesh et al. (2003) and not in line with the research that has been carried out by Cadinu et al. (2003); Wu et al. (2012).

Contrast to other variables, variable Influence of Lecturer (IL) has a value of sig value of 0.170 which is greater than 0.05 and also the value of t counts of 1.377 which is smaller than the value of t table 1.99. Thus the variable Influence of Lecturer does not have a significant effect on the variable behavioural Intention. Hypothesis H3 is rejected; this result is strengthen the results of previous studies conducted by Foon (2014); Handoko et al. (2018); Kaneberg & Zehra Jönköping (2016) and weaken the results of research conducted by Abu-Al-Aish & Love (2013); Davis et al. (1989); Venkatesh et al. (2003) and Payne & Curtis (2016).

The Personal Innovativeness (PI) variable has a sig value of 0.000 smaller than 0.05 and a value of t counts of 7.153 which is greater than t table 1.99. Based on these results, it can be concluded that the Personal Innovativeness has a significant influence on behavioural Intention. Hypothesis H5 is accepted, this result is support the previous study conducted by Bartels & Reinders (2011) and do not support research conducted by Chen (2014).

Based on Table 2, the Facilitating Condition (FC) variable has a t value of -0.748 which is smaller than t table 1.99 and a sig value of 0.455 which is greater than 0.05. Thus it can be concluded that the Facilitating Condition variable has no significant effect on Use Behaviour. Hypothesis H6 is rejected, this result is consistent with research conducted by Mousa Jaradat & Al Rababaa (2013) and different from the research conducted by Raman et al. (2014).

Dependent variables: Use Behavior (USE)

Variable behavioural Intention has a sig value of 0.000 which is smaller than 0.05 and a value of t counts of 10,133 which is greater than the value of t table 1.99. Based on these results, it can be concluded that behavioural Intention has a significant effect on Use Behaviour. Hypothesis H7 is accepted, these results reinforce the results of previous studies that have been conducted by Agudo-Peregrina et al. (2014); Venkatesh et al. (2012, 2003), and weaken the results of research that has been previously made by Mousa Jaradat & Al Rababaa (2013); Pardamean & Susanto (2015); Sedana & Wijaya (2010).

Based on the results of this study, it can be concluded that variable performance expectancy, effort expectancy, quality of service and personal innovativeness affect behavioural intention variables. Thus if a campus or higher education institution based on online learning wants to increase student interest in using technology for learning, it can pay more attention to factors such as performance, effort, quality of service and innovation. While the influence of lecturer variable has no effect on behavioural intention, this is suspected because online learning students do not or rarely meet directly with the lecturer.

Variable facilitating conditions have no effect on use behaviour; this is suspected because online learning students use their own facilities that they access from outside the campus, such as: the home or office where they work, so campus facilities in this context have no effect. While behavioural intention influences use behaviour, it means that using technology among students begins with their desires first, which is then realized in action.

This research can be used as a reference for similar research in the future. Subsequent research can use the UTAUT model by using research objects of online learning students who use additional nominal data, such as gender, age, experience and voluntariness of use as moderating variables. In addition, you can also use research models similar to different objects.

Ghalandari, K. (2012). The effect of performance expectancy, effort expectancy, social influence and facilitating conditions on acceptance of e-banking services in Iran: The moderating role of age and gender. Middle-East Journal of Scientific Research, 12(6), 801-807.