Monetary policy is a macroeconomic policy that is used to achieve macroeconomic goals such as consumption, liquidity, growth and inflation by the country’s government. Bangladesh bank is currently following a price targeting based monetary policy and it will be continued up to FY18. Bangladesh bank is prioritizing in building up strong capabilities in forecasting and eradicating impediments to financial pricing which is market based. Current monetary policy of Bangladesh is supporting manufacturing which is employment-focused, green project sub sectors and FDI facilitation. According to Bangladesh bank’s monetary program, growth ceiling of Domestic Credit (DC) is consistent with inflation and growth objectives. Bangladesh bank is ready for adjustments in rate of policy. There is robustness in the momentum of output growth followed by uptrend in food price. Global inflation may cause mitigation in the risk of domestic inflation. According to Bangladesh bank, monetary aggregates enhancing smoothly within the growth ceiling though domestic credit and inflation are remaining below the ceiling (Monetary Policy Statement, BB, 2017).

The rest of the paper is structured as follows. Section 2 describes a brief review of the relevant literature. Section 3 depicts a theoretical model that captures the Taylor’s rule. The econometric estimations for the long run relationship among the variables are set out in Section 4. Section 5 concludes with some concluding remarks.

The rationale for this research study is to examine monetary policy of Bangladesh during 1972-2016 in accordance with Taylor’s rule. To focus in this topic, to show critical analysis among the different previous works and to relate these researches to this research, several relevant studies have been examined. For better understanding and analysis, these studies have been classified by papers for developed economies, emerging economies and Bangladesh economy.

Mehra & Minton (2007) tested Taylor’s rule to examine whether interest rate is determining monetary policy actions in USA and found that inflation estimates the output gap very well in the context of Greenspan Fed by using real time data and by developing a forward-looking model. Farrell (2015) inferred New Zealand, Canada and Australia in terms of policy preferences of central banks regarding inflation by using small Keynesian open economy model and Bayesian estimation and found that the monetary policy is optimal according to Taylor’s rule and from the point of view of central banks. Berument (1999) assessed that both inflation and interest rates affect Treasury-bill rate in UK over the period 1958-1994 within the framework of Fisher hypothesis by applying ARCH and GARCH models and found that there is a long run relationship among expected inflation, inflation risk and the t-bill rate in UK. Nikolov (2002) explained why monetary policy rules of Bank of England and found that it uses an inflation targeted triangular rule and also explained that how policy rules are been used as the input of regular assessment under different assumptions by using the Taylor’s rule, Barinard rule and McCallum rule and by applying MPC methods over the period 1993-2001. Bouchabchoub, Bendahmane, Haouriqui & Attou (2015) presented monetary policy on the basis of Taylor’s rule in the context of European Central Bank and found that interest rate, inflation and GDP could be predicted by applying Taylor’s rule, Hall-Taylor equation, Kalman filter & Hodrick-Prescott model with reference to 2001-2009 and found inflation shock on interest rates.

Younus & Roy (2016) forecasted inflation, output and the policy rate for the period July 2016-June 2017 in Bangladesh with reference to 2006-2016 by applying ADF test, PP test, KPSS test and VAR analysis and found that interest rate and money supply are the two most significant variables in Bangladesh to forecast output and inflation and also concluded that to ensure potent management of real GDP growth and inflation in Bangladesh, the spread between lending rate and deposit rate could be used by the monetary authority of Bangladesh. To apply the Taylor’s rule, nominal interest rate, inflation rate and output gap must be incorporated. But one cannot ignore bank rate as it is one of the major policy tools of monetary policy. The literature review on the Taylor’s rule is bold but it lacks considering developing countries like Bangladesh. So, to fill up these gaps, this study considered bank rate instead of nominal interest rate of Bangladesh and estimated the structural stability of the model by applying CUSUM & CUSUMQ tests unlike the previous studies.

This research is descriptive in nature and the data is quantitative in nature. Only the secondary data were used. Time sample data were collected from the world development indicators report, internal database and websites from 1972-2016. An OLS model among the variables such as bank rate, inflation and output gap has been developed which is specified in Equation (2) and OLS and GMM methods have been applied. ADF test, PP test and KPSS test have been applied to test the stationary state of time series data. Cumulative sum (CUSUM) and cumulative sum of squares (CUSUMQ) of recursive tests have been applied to examine the stability of Taylor’s rule.

Taylor’s rule actually explains the influence of inflation rate on the nominal interest rate that changed by central banks. The output and demand dynamics are explained by IS curve as output gap

depends on past value and short term interest rate with constant variance and zero mean (Moreira, 2015). The Taylor’s rule is as follows:

and its past values with constant variance and zero mean (Moreira, 2015). In accordance with Taylor’s rule, an OLS model has been developed under the symmetry condition among bank rate, inflation rate and output gap of Bangladesh during the period 1972-2016 and the model and instrument rule is as follows:-

Where it, α, β0, β1, πt, β2, ogt and ?t denote bank rate, alpha coefficient, benchmark recommendations targeting inflation and interest, coefficient of inflation, inflation rate, coefficient of output gap, output gap and error term respectively. Here β0, β1 and β2 are positive parameters. The equilibrium bank rate is quoted by it, inflation target is quoted by πt and ?t is the shock of policy innovation in inertial rule. This model has the nature of forward-looking where bank rate (it) is defined by its past values by policymakers to avoid frequent reversions and abrupt movements. Here past bank rate is determining current bank rate. Authorities’ decisions are affected by public’s expectations. To explain the price stability forward-looking rule has been adopted as it’s significant to describe the behavior of bank rate as the implicit or explicit target of Central Bank. The equations (1) & (2) are presented in real terms for bank rate (it), inflation (πt) & output gap (ogt). The output gap

). The real term Taylor rule has been defined for the economic openness of Bangladesh by taking output gap in to consideration. The alpha coefficient (α) explains the sensibility of bank rate (it) to output gap (ogt). Because of countercyclical behavior of monetary policy, α is >0. When α>1 the bank rate (πt) increases response to increase of inflation deviation (πt) (Moreira, 2015).

Augmented Dicky Fuller (ADF), Phillips-Perron (PP) and KPSS tests have been applied to test integration order and the stationary state of the variables in first step. From Table 1, it appears that bank rate (i) and inflation rate (π) are stationary at level, I (0); on the other hand output gap (og) is stationary at 1st difference, I (1).

Co-integration methods are not justified as the time series or data jointly are not I (1). Hence OLS and GMM should be adopted with bank rate (i) and inflation rate (π) at level, I (0), while output gap (og) at first difference, I (1) in a dynamic estimation of short term. So, to estimate Taylor’s rule for the Bangladesh economy, this study implemented such methods. To correct endogeneity, residual autocorrelation and heteroskedasticity, GMM method is applied. For the sake of robustness, the results of GMM regressions could be compared with the findings of OLS. The instrumental variables must be exogenous for testing GMM (Moreira, 2015). From Figure 1, the visual plots of the variables appeared which are properly glued. 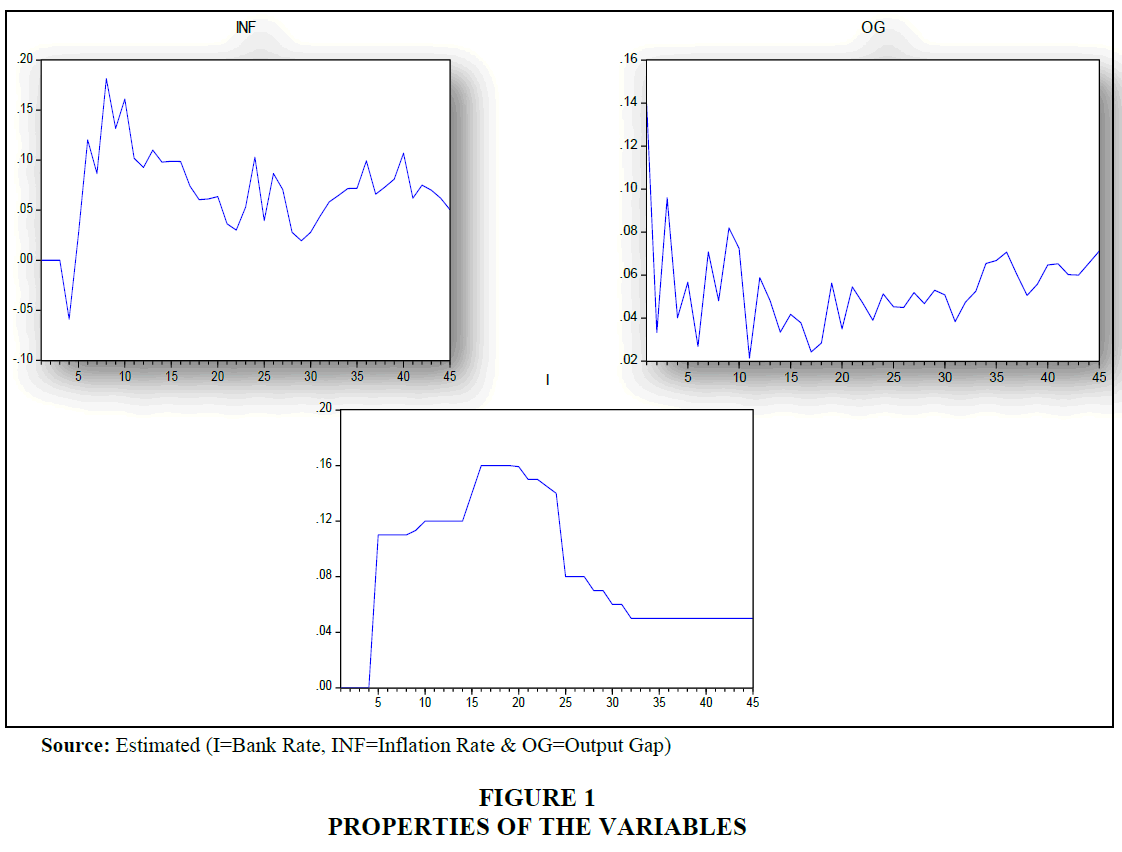 Figure 1:Properties Of The Variables.

The specifications could be observed in Table 2 through OLS estimates. The adjusted R2 is above 0.3. The Newey and West (1987) estimator has been used to estimate OLS which is in line for correcting residual autocorrelation, suggested by LM test regarding the specifications. The coefficient of inflation (0.456088) is significance at 1% which means that there is a high degree of gradualism in inflation rate to adjust bank rate. All the generated estimates and estimated values are away from excess unity as far as forward-looking coefficients are concerned. In this regard, such policy is not consistent with bank rate in terms of counter cyclical movements. The value of output gap (-1.013960) is negative and it’s not statistically significance meaning that Bangladesh Bank reacts to output gap changes pro-cyclically (Moreira, 2015).

The GMM estimates are just opposite of OLS estimates in terms of the coefficients of inflation and output gap that are not consistent with pass-through and counter-cyclical effects. These findings denote that Bangladesh Bank preferred downward bank rate during the analyzed period to offset downward movement of output of Bangladesh. The model maintained a high level of adjusted R2 and the null hypothesis has not been rejected by J-statistics. Thus the OLS and GMM estimates identify divergence from Taylor’s rule in the monetary policy of Bangladesh. Moreover, there is pro-cyclical bias of Bangladesh Bank in terms of the responses to inflation and output gap thus making inconsistent monetary policy (Moreira, 2015).

From Figures 2 and 3, it appears that bank rate function of Bangladesh was not stable during 1972-2016. CUSUM and CUSUMSQ plots must be under 5% critical bounds if the coefficients were to be stable but in this research the plots of CUSUM and CUSUMQ both crossed the bounds. 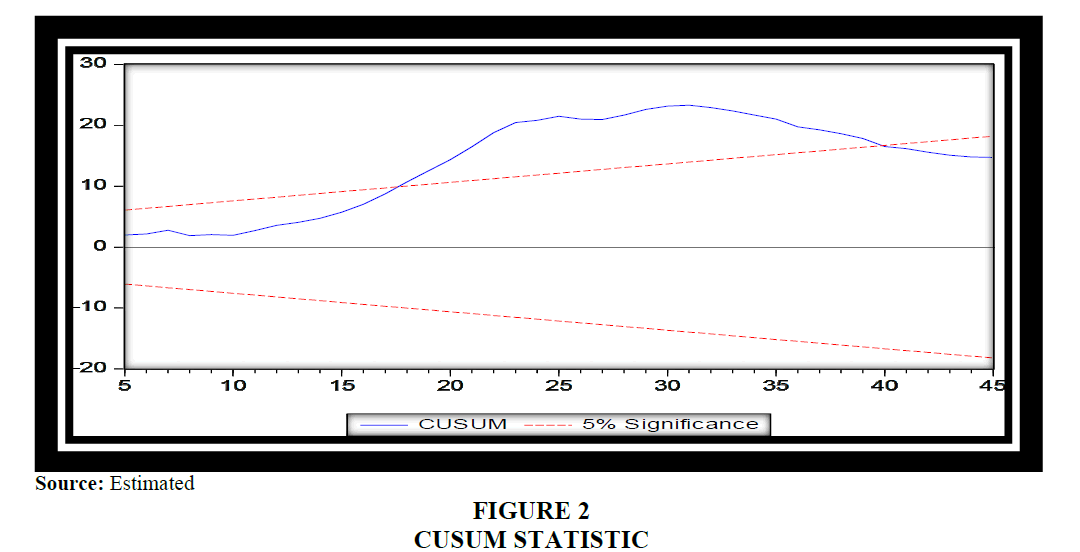 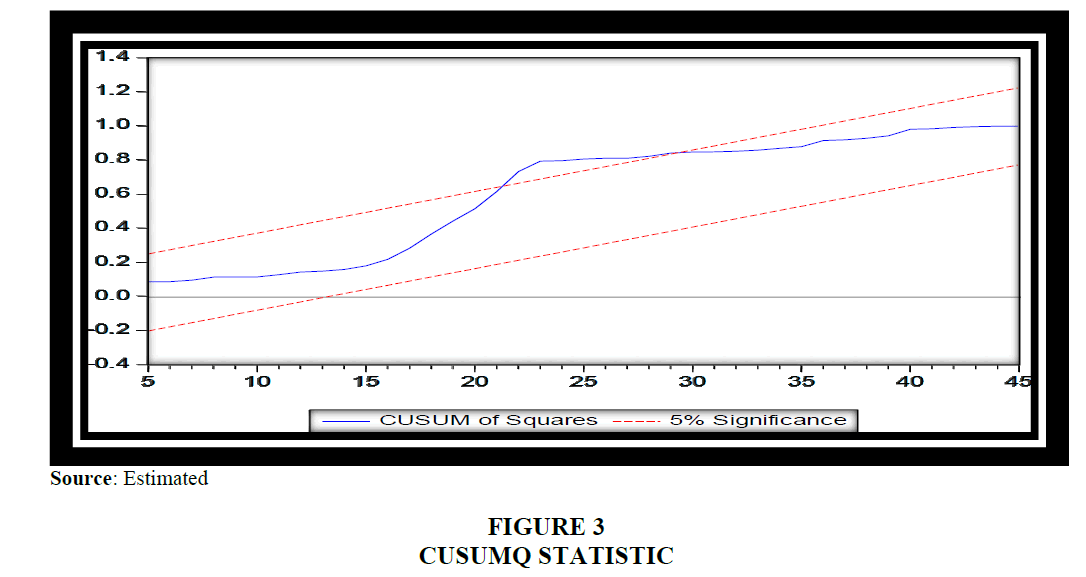