Citation Information: Ramchander, M. (2021). The influence of entrepreneurial education on entrepreneurial intentions of business students at the Durban University of Technology. Journal of Entrepreneurship Education, 24(3).

The conceptual framework that informs this study is depicted by the link between entrepreneurship education and entrepreneurial intention as illustrated in Figure 1. 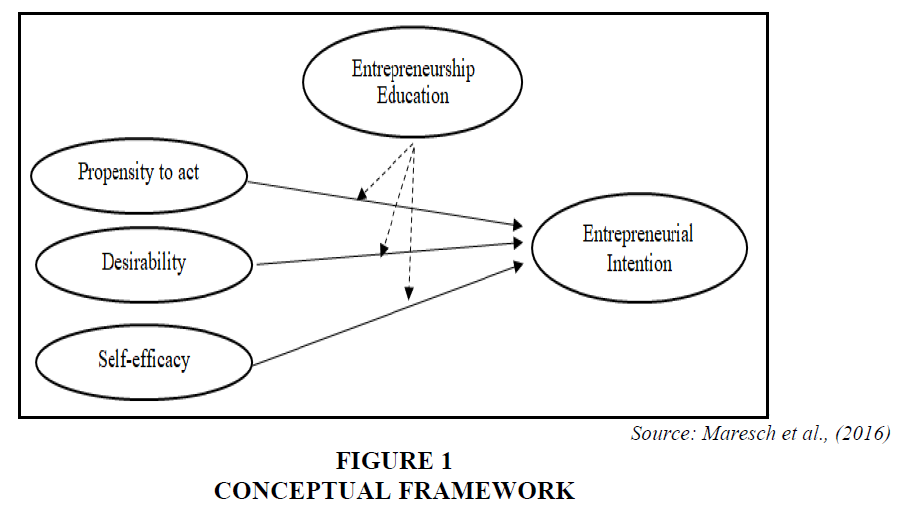 The literature underpinning the theoretical basis for explanations on intentions gravitates mostly towards the works of Ajzen (1991) and Shapero & Sokol (1982). Ajzen’s theory of planned behaviour and Shapero & Sokol’s model of entrepreneurial event theory dominate the literature and are the most frequently used models that conceptualise human intentions and are considered to be best suited to studying entrepreneurial behaviour (Krueger, 1993; Davidson, 1995; Van Gelderen et al., 2015; Ranga et al., 2019).

According to the theory of planned behaviour, individual’s actions are explained in terms of intentions through the linkage between attitudes and behaviour (Hattab, 2014). Valliere (2015) notes that beliefs shape the formation of attitudes towards prospective behaviour. This, in turn drives the formation of intent to perform behaviour and to cause the individual to act. The theory of planned behavior includes the following three components as the main attitudinal antecedents to entrepreneurial intention (Miller et al., 2009; Morris & Kuratko, 2014; Weerakoon & Gunatissa, 2014):

(i) Personal attitude: the evaluation of the consequences (favourable or unfavourable) of behaviour;

(ii) Perceived behavioural control: the individual’s personal belief of his or her competency in performing the behaviour (self-efficacy); and

(iii) Subjective norms: the social pressure to perform or not perform the act.

(i) Perceived desirability: the personal attractiveness of starting a business;

(ii) Perceived feasibility: the degree to which an individual feels personally capable of starting a business; and

(iii) Propensity to act: an individual’s disposition to act upon his or her own decisions and a desire to take control.

Shapero & Sokol’s (1982) entrepreneurial event theory posits the interaction among contextual factors that influence an individual to consider the entrepreneurial option as a result of an appreciating event and the individual’s response to that event depends on his or her perception of perceived desirability and feasibility.

Krueger et al., (2000) compared both models and found that both receive empirical support as valid predictors of entrepreneurial intentions. Iakovleva & Kolvereid (2009) integrated elements of the two models into one, where attitude and subjective norms were combined as a function of perceived desirability, and perceived behavioral control was combined with subjective norms as a function of perceived feasibility. According to Krueger et al., (2000) the choice of behavior is dependent on the credibility of alternative behaviours coupled with a significant measure of the propensity to act. Mussons-Torras & Tarrats-Pons (2018) explicate that the key ingredients of credibility are desirability and feasibility.

The literature evidences various ways in which entrepreneurial intention has been conceptualised, operationalised and measured. One method, using single item measurement of entrepreneurial intention, involves pitching a trade-off that elicits the individual’s preference over running his or her own business, to being employed by an organisation. For example, “I would rather start a new business than being an employee (manager) of an existing one” (Lüthje & Franke, 2004) or “I prefer to be an entrepreneur (start my own business) rather than being an employee of a large organisation” (Carayannis et al., 2003). Other single item measures of entrepreneurial intention elicit a response to straight forward statements as illustrated in Table 1.

Multi-item measures entail measuring the variables that are deemed to influence entrepreneurial intentions as described in the theory of planned behaviour and entrepreneurial event theory. Table 2 illustrates the items that have previously been used to measure entrepreneurship intention traits.

Not all studies suggest that entrepreneurial education influences entrepreneurial intention (Oosterbeek et al., 2010). For example, a study involving 73 Ethiopian undergraduate Natural, Computational, Social Science, Agricultural, Business and Economics, Engineering and Technology students found that the majority will be job seekers and unlikely to start their own business and the entrepreneurship course that was attended had no significant influence in motivating students towards entrepreneurship (Abebe, 2015). In another study involving 234 Malaysian undergraduate and postgraduate Information Technology, Administration, Management, Education, English, Tourism and Technology students, it was found that students were focused on completing the studies that they originally enrolled for and were not willing to pursue even good business opportunities that may have arisen in the course of their study (Sandhu et al., 2010).

This longitudinal study entails primary research and adopts a quantitative research design. The population comprised 187 full time Business students enrolled for an entrepreneurship module in the Faculty of Management Sciences at DUT. There was no sampling as the entire population was targeted. The survey instrument comprised a questionnaire, with items being extracted from previously validated questionnaires (Lüthje & Franke, 2003; Krueger et al., 2000; Carayannis et al., 2003; Autio et al., 2001; Kickul & Gundry, 2002). A five-point Likert type scale was employed to capture the levels of agreement or disagreement with statements relating to entrepreneurship intention traits. The questionnaire was administered twice - first at the commencement of the module (1st week of August 2019) and then when the module was completed (last week of October 2019). The assistance of the lecturer delivering the entrepreneurship module was sought to allow time for questionnaires to be distributed and collected from students during the entrepreneurship lectures. The anonymity of the respondents was maintained at all times and all institutional protocols with regards to ethics were strictly adhered to. The data was captured on version 26 of SPSS and analyzed using descriptive and inferential statistics.

Entrepreneurial intention was firstly measured by posing a trade-off statement that elicited preference over starting one’s own business to being employed by a large organization (Carayannis et al., 2003). The responses were cross-tabulated against Group (before and after) as depicted in Table 5.

More participants preferred to start their own business after (58.4%) as compared to before (40.2%) having attended the entrepreneurship education programme. The significance of the difference needed to be tested and this was done by performing a Chi-Square test, the results of which are illustrated in Table 6.

Yate’s Continuity Correction significance (0.006) was less than 0.05, thus confirming that the differences were significant. Thus, there was a greater preference for students to start their own business than for being employed in a large organization, after attending the entrepreneurship module. However, using a single item measurement of entrepreneurial intention, by pitching a trade-off that elicits one’s preference over running one’s own business, to being employed by an organization, has limitations. In this regard, Hattab (2014) explained that in the process of simply acquiring further knowledge about entrepreneurship, student’s perception of and desirability of self-employment is positively altered by virtue of it being deemed as a possible career choice. Hence, the preference to start one’s own business may not necessarily stem from the efficacy of entrepreneurship education. Thus, other methods that could measure entrepreneurship intention may be helpful in getting a clearer understanding of the efficacy of entrepreneurship education.

The mean value for entrepreneurial intent score was higher after (as compared to before) participants attended the entrepreneurship module. A similar pattern was observed with regards to the desirability, self-efficacy and propensity to act scores. The significance of the differences needed to be tested by performing a test for equality of means, as illustrated in Table 8.

Self-efficacy is the individual’s personal belief of his or her competency of performing a behaviour (Weerakoon & Gunatissa, 2014) and entrepreneurial education that does not have a positive influence on self-efficacy would do little to enhance individuals’ belief or confidence in their own ability to take action to pursue a goal, despite the desire to do so. Similarly, stemming from Shapero & Sokol’s (1982) explication of ‘propensity to act’, entrepreneurship education that does not have a significant influence on propensity to act would do little to enhance how individuals perceive their ability to act upon decisions and take charge of the consequences of their actions.

Of course, in any study, there must be assurance that the data is reliable. Table 9 displays the reliability statistics for each of the entrepreneurship traits.

Abebe, A. (2015). Attitudes of undergraduate students towards self-employment in Ethiopian public universities. International Journal of Business and Management Review, 3(7), 1-10.

Boyd, N.G., & Vozikis, G.S. (1994). The influence of self-efficacy on the development of entrepreneurial intentions and actions. Entrepreneurship Theory and Practice, 63-74.

Carayannis, E.G., Evans, D., & Hanson, M. (2003). A cross-cultural learning strategy for entrepreneurship education: Outline of key concepts and lessons learned from a comparative study of entrepreneurship students in France and the US. Technovation, 23, 757-771.

Chinyamurindi, W.T. (2016). A narrative investigation on the motivation to become an entrepreneur among a sample of black entrepreneurs in South Africa: Implications for entrepreneurship career development education. Acta Commercii – Independent Research Journal in the Management Sciences, 16(1), 1-9.

Hopp, C., & Stephan, U. (2012). The influence of socio-cultural environments on the performance of nascent entrepreneurs: Community culture, motivation, self-efficacy and start-up success. Entrepreneurship and Regional Development: An International Journal, 24(10), 917-945.

Krueger, N. (1993). The impact of prior entrepreneurial exposure on perceptions of new venture feasibility and desirability. Entrepreneurship Theory and Practice, 18(1), 5-21.

Maresch, D., Harms, R., Kailer, N. & Wimmer-Wurmc, B. (2016). The impact of entrepreneurship education on the entrepreneurial intention of students in science and engineering versus business studies university programs. Technological Forecasting and Social Change, 104, 172-179.

Roxas, B. (2014). Effects of entrepreneurial knowledge on entrepreneurial intentions: a longitudinal study of selected South-east Asian business students. Journal of Education and Work, 27(4), 432-453.

Sesen, H. (2013). Personality or environment? A comprehensive study on the entrepreneurial intentions of university students. Education and Training, 55(7), 624-640.

Zampetakis, L.A. (2008). The role of creativity and proactivity on perceived entrepreneurial desirability. Thinking Skills and Creativity, 3(2), 154-162.