The Mediating Role of MSME's Growth On Financial Inclusion

Financial inclusion is considered important by international policy makers because based on economic principles financial inclusion is the goal of countries in the world globally, but each country has a development of its development model, according to the conditions in each country. The focus of issues that are important to be discussed further in Financial Inclusion is related to the condition of micro, small and medium enterprises (MSMEs) and the quality of financial services obtained by the poor. Access to MSMEs to get financing services from banks is considered important because, MSMEs have a very large contribution in reducing unemployment and poverty rates in developing countries. In Indonesia, problems often arise in MSMEs financing services, related to the lack of clear separation between companies and households, because often households are involved in the production process and are not incorporated, making it difficult to distinguish the role of households as consumers or the role of households as producers of goods and services. The government is aware of the importance of implementing financial inclusion, and to assist MSME businesses in accessing capital, the government issued a policy through BI Regulation No.17/12/PBI/2015 that requires commercial banks to reach the MSME credit ratio of the total loans disbursed at least 20 percent.

Based on research by Brown and Lee (2019) state that MSMEs with high growth tend to look for external funding sources from bank loans. While research conducted by David F. Moreira (2016) explained that the ease of access to financial credit supported by legislation from European governments can significantly encourage the growth of MSMEs. In addition, there is research conducted by Grohman et al. (2018) finding that an increase in financial literacy in a diverse population has an influence on the level of GDP per capita in a country. GDP is one measurement of financial inclusion. Research by Wozniaka et al. (2019) argues that medium enterprises growth affects financial inclusion, while micro and small enterprises do not affect financial inclusion in Poland.

Research related to MSME financing in encouraging the national economy and Financial Inclusion has been done by many previous researchers including (Nengsih, 2015a & 2015b); Mohieldin et al. (2012) explained that Islamic Banking has great potential in implementing Financial Inclusion seen from an increase in third party funds (DPK) and an increase in microfinance. Rifa'i. A (2017) examines the role of the Sharia People Financing Bank in implementing financial inclusion through MSME Financing. Zaeema Asrar et al. (2018) examines the reasons large companies in Pakistan are reluctant to go into business in Islamic banking, and are more inclined to choose conventional banks. Franklin et al. (2016) in The Foundations of Financial Inclusion: Understanding Ownership and Use of formal Accounts explore the factors that drive a country's financial inclusion to be stronger.

According to the Financial Services Authority (2017) in the revised National Literacy Strategy Inclusive Financial (SNLKI) states that public financial literacy will be followed by public financial inclusion. According to the World Bank Global FINDEX that the value of the National Financial Inclusion index in Indonesia was 19.6% in 2011. In 2016, Indonesia's financial inclusion rate was able to reach 67.82%, this increase was not in line with the increase in financial literacy like the OJK analysis. This is due to lack of awareness in managing funds, affordability of bank administration fees, trust in financial institutions, lack of documentation or records of business, religious or cultural activities of the community, consumer experience in using bank services.

The results of the Fintech News Singapore survey, state that more and more people are using fintech services to make payment transactions and loan services, thus expanding the reach of financial inclusion in Indonesia. A high increase in GDP per capita can be obtained with the use of high financial services as well. (Antonia Grohman et al., 2018). According to the Ministry of PPN (BAPPENAS) in 2017, Fintech is a form of implementation of the National Financial Inclusive Strategy (SNKI).

Theory of Inflation as a condition where there is an increase in the level general prices, both goods, services and factors of production. From this definition indicates a weakening purchasing power followed by a decline in the real (intrinsic) value of a country's currency. (Risal Rinofah, 2015). According to Feldkircher & Siklos (2019) state that inflation is driven by two sets of determinants, namely local or domestic factors versus international or global forces. Local determinants include technical progress and productivity changes, demographic factors, such as institutional considerations inflation target, central bank independence, systemic adoption of monetary policy in the economy. However, in general, economists tend to make the difference between aggregate demand and changes in sources of inflationary pressure (Darwanto, 2013).

Other studies use surveys or experiments to measure respondents the level of financial and economic literacy as well as what they expect or the level of perceived inflation Because "understanding inflation" is only one of the four elements of the definition of financial literacy, the study mentioned above does not only focus on people's understanding of inflation, its causes and consequences (Rumler & Valderrama, 2019).

Another study also conducted by Veronica (2014) shows that the company's financial performance factors affect the possibility of company bankruptcy. Meanwhile, macroeconomic factors have an impact on the possibility of bankruptcy. Then Darmawan (2017) has a relationship between corporate governance and financial difficulties. Meanwhile, the macroeconomic variables are inflation, interest rates and exchange rates do not affect financial pressures.

According by Al Arif in Mujaddid, F. and Sabila, G.F. (2018) said that financing is funding provided by one party to another party to support the planned investment, whether done alone or in an institution. In other words, financing is funding spent to support planned investments. According to Law No. 10 of 1998 concerning banking states financing is the provision of money or bills based on an agreement or agreement between the bank and another party which requires the financed party to return money or these bills after a certain period in return for the results (Grohmann, 2018).

According by Trinha, L.Q. Ha Thi Thanh Doan (2018) state that developing economies micro, small, and medium sized enterprises (MSMEs) play an important role not only in job creation but also in industrial development and economic advancement While there has been substantial literature investigating factors impeding the performance of MSMEs, including lack of credit access and adoption of less effective business practices. Studies of the underlying drivers of MSME growth are rare, especially for developing countries. In their study of small firms in India, Coad and Tamvada (2012) found that exporting firms show faster growth than nonexporting firms. However, such studies are limited, and further research on the influence of internationalization activities on firm growth in developing countries is thus warranted Maryati Sri. (2014). 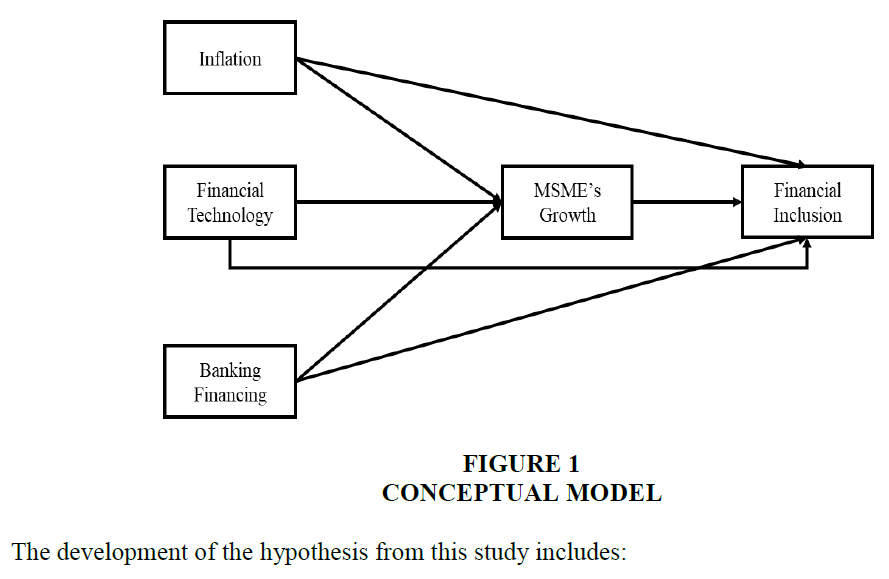 The development of the hypothesis from this study includes:

H8: MSME’s Growth can mediate the relationship between Inflation and Financial Inclusion.

H9: MSME’s Growth can mediate the relationship between Fintech and Financial Inclusion

H10: MSME’s Growth can mediate the relationship between Banking Financing and Financial Inclusion.

This research is a quantitative research, meaningful research describe conditions financial inclusion in Central Java and Indonesia. The data in this study use secondary data. Secondary data was obtained from supporting data through literature studies, journals, mass media articles, and books related to this research topic. This study collects secondary data from Bloomberg. This study uses a non-probability sampling technique with convenience sampling method. Sample criteria that have complete monthly data from 2013 to 2018 in Central Java The data of this research are 72 because referring to the opinion of Ferdinand, (2014) which states that samples greater than 30 and less than 500 are sufficient for general research (Kamalesh Shailesh, 2012).

Based on the data selection, the total sample size was 360 data during the study in monthly of period 2013 - 2018. However, the results of the normality test showed that the research data with the number of N = 72 were normally distributed. Following are the results of descriptive statistical analysis processing in Table 1 as follows.

Data normality test use the normal p-plot graph to find out the data distribution of a research model, where the picture can be seen on Figure 2 as follows: 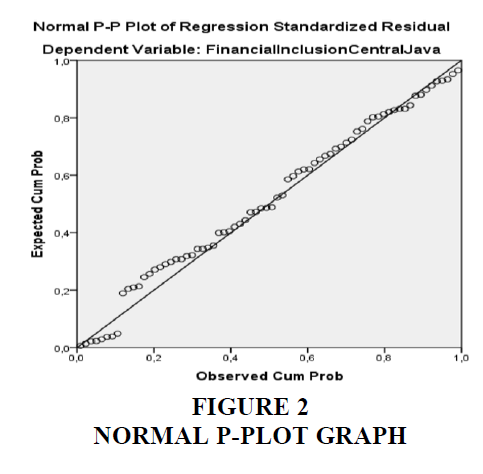 Figure 2 shows that the dots spread above and below the number 0 on the Y axis which indicates that the data distribution in this research model is normally distributed (Muslimin, 2014).

The heteroscedasticity test aims to test whether in the regression model there is an inequality of variance from the residuals of one observation to another. To test for heteroscedasticity in this study using the Glejser test with the following output in Figure 3. 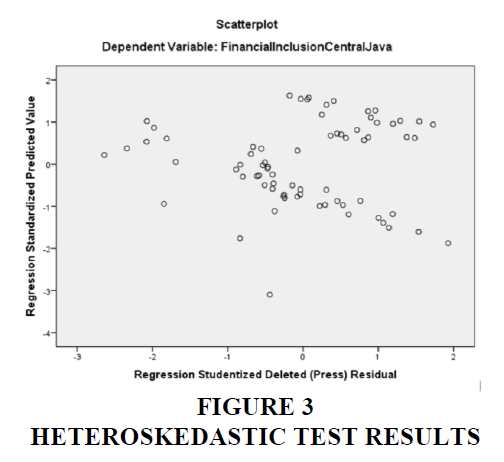 Multiple linear regression analysis in order to determine the magnitude of the effect of Inflation-Central Java, Fintech-Central Java and Banking Financing-Central Java on MSME’s Growth. The result of first regression can be seen on Table 2.

Table 2 also show that there are no multicollinearity, because the VIF value for independent variables is under 10 (VIF < 10).

In this study, the coefficient of determination (Adjusted R2) was 0.332. This means that the variables Inflation-Central Java, Fintech-Central Java, Banking Financing-Central Java are able to explain MSME’s Growth-Central Java of 33.2%. While the rest, which is 100% - 33.2% = 66.8%, is explained by factors other than the independent variables study. The result of second regression can be seen on Table 4 Rini (2017).

Table 4 also show that there are no multicolinearity, because the VIF value for independent variables is under 10 (VIF < 10) (Xiaoqiang & Degryse, 2010).

The results of the coefficient of determination (second regression) can be seen in the following Table 5.

The results of path analysis about Banking Financial-Central Java’s influence on Financial Inclusion-Central Java through MSME’s Growth-Central Java can be seen on Figure 3 as bellows:

The author would like to thank Diponegoro University research and community service institutions that have provided funding. Funding is in the form of an International Publication Research (RPI) fund with funding sources other than the Undip State Budget. Hopefully this research will provide benefits for the development of science.