Citation Information: Salendu. (2019). The productivity of agricultural sector and industrial sector as a driving force of economic growth and community welfare in Indonesia. Journal of Management Information and Decision Sciences, 22(2), 127-135.

This study aims to examine the effect of agricultural and industrial sector productivity on economic growth and community welfare in Indonesia. Economists, since the early development of modern economics, have actually embarked on trade liberalization and they are seen as the founders of classical economics, which considers liberalism the essence of the economy. They believe that inter-state trade should be left free with as minimum as possible government intervention, in the form of tariffs and or other barriers. This is based on the argument that free trade will provide greater benefits to trading countries and to the world and it will increase greater prosperity compared to non-trading activities. Nevertheless, the course of further economic theory development, supported by several empirical facts that give a different picture to the expectations of classical economic theory, has proven that not all predictions of classical economic thinkers are true.

Indonesia, as a developing country with an open economy and ratified various regional and global economic and trade cooperation agreements, will finally feel the pressure of liberalization that in the end will be clashing with internal policies and threaten the national interests. Furthermore, inevitably, in the current era of globalization, trade liberalization has been the focus of economic development strategies in developing countries. This is because trade barriers of any kind, such as tariffs or quotas, are believed to only create inefficiency costs in terms of both production and consumption leading to low level of welfare.

Internally, Indonesia has begun to reform its trade policies since the mid-1980s, when there was a decline in the crude oil price in the world market as the mainstay of the national export commodity. In this case, the government conducted a series of economic deregulation to encourage exports that generate foreign exchange (Erwidodo & Payogo, 1999; Feridhanusetyawan & Pangestu, 2003). The more open and integrated foreign trade is also driven by external factors such as the ratification of trade agreements between countries, regions, or even global ones (Anugrah, 2003; Kariyasa, 2003). Feridhanusetyawan and Pangestu (2003) explain that these external pressures of liberalization happen due to regionalization efforts in the late 1980s and mid-1990s (as with the establishment of AFTA and APEC) and commitment to the Uruguay Round Agreement as part of a series of GATT (General Agreement on Tax and Tariff) that was later transformed into a formal organization called WTO (World Trade Organization). AFTA and WTO agreements are binding, while the APEC (Asia Pacific Economic Cooperation) agreement is voluntary. Nevertheless, the spirit brought by the three forms of institutions is relatively similar, namely liberalization through the decline of trade barriers (tariffs and non-tariffs).

Trade Liberalization and Productivity of Agriculture and Industry

Generally, theories tend to predict that trade liberalization will increase the level of competition and this increasingly strong competition will lead to efficiency for both production and consumption. The efficiency gains from the production side are the reallocation of resources from less efficient sectors to efficient sectors in line with their competitive advantage. While the efficiency gains from the consumption side are the shift in consumption from the less favored commodities to the more favored commodities. All of these will ultimately improve the welfare of producers and consumers (Tovar, 2004).

This research aimed to find out how the effects of trade and industry sector productivities on people’s welfare both directly and through economic growth. The hypotheses formulated are explained in Figure 1. 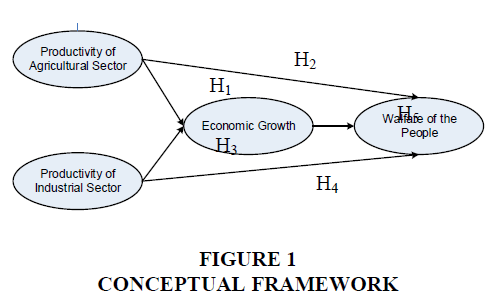 From that figure, the hypothesis proposed in this research is as follows:

H1: Agricultural sector productivity has a significant and positive effect on economic growth.

H2: Agricultural sector productivity has a significant and positive effect on community welfare.

H3: Industrial sector productivity has a significant and positive impact on economic growth.

H4: Industrial sector productivity has a significant and positive impact on community welfare.

H5: Economic growth has a significant and positive impact on community welfare.

This study is explanatory as it looks at causal relationships between one variable with another (causality relationship). The data used in this study is secondary data from various sources, such as the International Financial Statistics from IMF, World Bank, Bank Indonesia reports, Central Bureau of Statistics and several other sources. All data used in this study is annual data for each research variable from 1986 to 2016. Thus, the sample size is 31 observations (31 years). Data analysis method used is Structural Equation Modeling (SEM) with AMOS software. The variables used are as follows:

1. Agricultural Sector Productivity is the contribution of agriculture sector to Gross Domestic Product (GDP) of Indonesia in t period in percentage (%).

2. Industrial Sector Productivity is the contribution of industrial sector to GDP in t period in percentage (%).

3. Economic growth is the gap in GDP in t period in percentage (%).

4. The welfare of the people is the level of welfare of Indonesian in t period in percentage (%).

The first stage is hypothesis testing. Based on Table 1 and Figure 2, we can present the results of the structural model testing as follows. 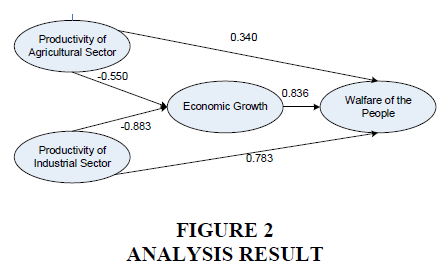 The third hypothesis testing. The third hypothesis testing examined the effect of industrial sector productivity (X2) on economic growth (Y1). The results showed a structural coefficient of-0.883 and P-value of 0.003. The P-value of<0.05 indicates there was a significant and inversely proportional relationship between industrial sector productivity (X2) and economic growth (Y1). That is, the higher the industrial sector productivity was, the lower the economic growth would be. This is very contradictory to the previous statement that the higher level of trade liberalization from a country will lead to more increased competitiveness in the country, ultimately encouraging every industry to make efficiency by reallocating resources to the sectors according to its comparative advantage.

The fifth hypothesis testing. The fifth hypothesis testing examines the effect of economic growth (Y1) on people’s welfare (Y2). It results in a structural coefficient of 0.836 and P-value of 0.000. Since the P-value<0.05, it indicates a significant influence of the economic growth (Y1) on people’s welfare (Y2). This shows that the higher the economic growth, the higher the welfare of society. These results indicate functional relationships that are inconsistent with the hypothesis as well as significant at 1% degree. This indicates that economic growth in Indonesia is still at the first stage of growth (in accordance with Kusnetz Theory) where economic growth will be followed by the inequality of increasing income distribution. In other words, only some people enjoy economic growth, while most do not. Therefore, the increasing inequality of income distribution will result in decreased welfare.

First, to reduce the negative impact of liberalization on economic growth and income distribution, we surely have to improve the competitiveness of Indonesian exports in international markets by taking some actions. (a) The first is by creating a good investment climate by maintaining macroeconomic stability and reducing economic costs such as bureaucracy that tend to be convoluted and levies. (b) Then, we have to maintain the stability of the domestic inflation rates, among others with monetary policies, such as inflation targeting policy. (c) Third, there must be an increase in productivity and efficiency in the use of relatively abundant and inexpensive production factors in Indonesia, which in this case is labor, through education and training of human resources. (d) Last but not least, we must develop a highly competitive product from each region through the development of products based on core competencies of the region.

Second, to reduce the excessive domestic market response to imported goods, we must (a) apply the concept of standardization to products in the market, such as SNI, so consumers can choose to consume goods that already meet national standards and (b) the government may adopt a policy for all government consumption to use domestic production.

Thirdly, this research provides consideration as a reference for future researchers with a similar topic, especially those who are interested in developing further the conceptual framework and expanding more the research scope. From this research, it can be concluded that the agricultural and industrial sector productivities have no direct effect on people’s welfare. It is economic growth that directly affects people's welfare.

Thus, we recommend the followings. First, it is best to reduce the industry concentration policy to prevent excessive pricing and profit behavior as is commonly practiced by monopolists. This reduction will increase efficiency because of increased competition in the domestic market and will in turn slow down price increases or even push domestic price reductions.

Jin, J.C. (2000). Openness and Growth: An Interpretation of Empirical Evidence from East Asian Countries.” The Journal of International Trade and Economic Development, 9(1), 5–17.

Tovar, J.A. (2004). The Welfare Effects of Trade Liberalization and Exchange Rate Pass Through : Evidence from The Car Industry in Colombia. University of California, Berkeley.