In today’s turbulent economic situation and with an increasing rate of globalization, expatriation has become a common practice among multinational corporations, due to their international strategic business expansion and development. It serves several essential purposes such as exerting control in subsidiaries, coordinating and integrating the business and transferring knowledge in host countries (Arman & Aycan, 2013). Usually, expatriates will be sent abroad to another country, known as the host country, which differs from their home country to accomplish an international assignment for a specified period. Previous literature defines expatriates as ‘employees of business or government organizations who are sent by their organization to a different country from their own, to accomplish a job or organization-related goal for a temporary period' (Arman & Aycan, 2013; Aycan & Kanungo, 1997; Anigbogu & Nduka, 2014; Purnama, 2014; Chielotam, 2015; EmenikeKalu & Obasi, 2016; Mowlaei, 2017; Callaway, 2017; Albasu & Nyameh, 2017; Maroofi et al., 2017; Kucukkocaoglu & Bozkurt, 2018; Maldonado-Guzman, Marin-Aguilar & Garcia-Vidales, 2018). Discussions and debates on the issues and problems of cross-culture adjustment to the host country are most frequently cited as the reasons for expatriates' early return and failure. The early return constitutes a very high risk not only during expatriate assignment but also after completing the international assignment period (Reiche et al., 2011; Arman & Aycan, 2013; Santhi & Gurunathan, 2014; Anyanwu et al., 2016; Jones & Mwakipsile, 2017; Mosbah et al., 2017; Malarvizhi et al., 2018, Le et al., 2018; Odhiambo, 2018). Previous literature indicate that the loss of an expatriate assignment is basically average but the rate is three times higher than local employees which reveals a failure rate estimation of up to 40% (Trompetter et al., 2016). Once the expatriate experiences problems during the expatriation, it tends to cause poor job performance and leads to other issues such as turnover and a decrease in organizational commitment.

In the Malaysian context, the government tends to encourage and enhance MNCs’ preference to choose this country as their ASEAN hub for international operations. Moreover, the government encourages the arrival of expatriates from various countries to reside and work in Malaysia as a means to increase the foreign direct investment which is vital for Malaysia’s economic development. These MNCs generally depend on their expatriate’s job performance to enhance its business operations in the host country. However, past studies highlight that 65% of companies state that 5% of their expatriates go back prematurely before completing the international assignment (Zainol et al., 2014). Thus, this situation leads to an undesirable situation for both the expatriates as well as for the MNCs business operation.

On the other hand, contextual performance refers to an expatriate’s performance in aspects such as the role which goes beyond specific job duties (Lee, 2018). These include the creation of healthy relationships with the host country’s nationals and the ability to adapt to foreign (local) customs. For example, employees volunteering to carry out task activities that are not formally part of the job, helping, and cooperating with others in the organization to get tasks accomplished (Borman & Motowidlo, 1997). In other words, it reflects the active development or maintenance of ties with members of the host country in the workplace. Therefore, both task and contextual performance contribute independently to overall performance. Due to this distinction, it creates the motivation for this study to examine the influence of expatriate adjustment on both these dimensions of expatriate job performance (Wojtczuk-Turek, 2017).

Presently, within IHRM research there is a tendency for researchers when exploring and investigating issues on expatriate job performance to include another important stakeholder in their studies, known as host country nationals (HCNs) (Pfeifer & Wagner, 2014; Gnanakumar, 2018). A study by Malek et al. (2015) included multiple stakeholders in their research, while focusing on social support towards expatriate adjustment and job performance. Furthermore, a study from Zakariya et al. (2018) found that host country co-workers' citizenship behavior could also play a crucial role in strengthening the relationship between work adjustment and task performance of expatriates. With a multitude of findings and mixed results, the current study examines the relationship between expatriate adjustment and job performance in Malaysia which has been rated as one of the top five destinations among expatriates in the South East Asian Region (HSBC Bank Malaysia Berhad, 2015).

Based on Figure 1 categorization of expatriate adjustment, three components were initially chosen, but it was later found that, based on the results of factor analysis, the items loaded under four different components (Fatula, 2018). The four components structure produced a better result. The general adjustment was divided into two components, namely general adjustment and additional adjustment. The additional adjustment focuses on health care facilities, shopping, entertainment, recreation facilities, and opportunities. Thus, it leads this study to accept the fourth component as a new finding of the factor analysis. Therefore, in this study, expatriate adjustment is expected to influence task and contextual performance positively. Thus, this research hypothesized the following: 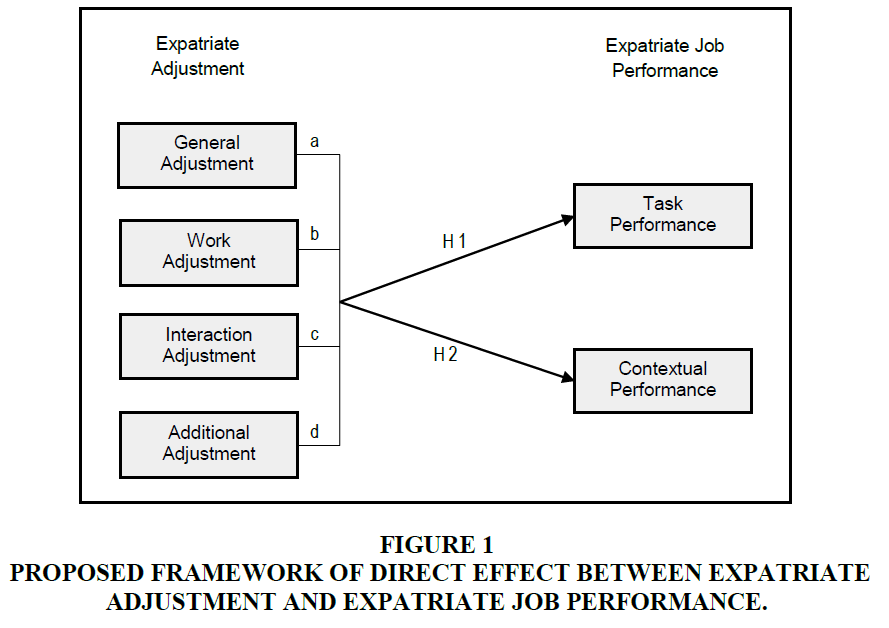 This study adopted a quantitative approach with a cross-sectional design. This study adopted a purposive non-probability sampling technique. Therefore, not all expatriates working in Malaysia were chosen in this study with only foreign expatriates residing and working at MNCs in the greater Kuala Lumpur and Selangor area were chosen to participate in this study. This study used a self-administered questionnaire survey method. Out of the 600 questionnaires that were distributed only 195 questionnaires were duly received. This constituted a 32.5% response rate. However, of the 195 that were received 56 were discarded due to several issues such as extreme outliers, excessive missing data, unusable responses and those that did not meet the above criteria. Therefore, only 139 were used as the final sample representing a 23.2% return rate. This response rate was consistent with past study response rates (20-30%) in most expatriate studies (e.g., Rose et al., 2010). The sample consists of 139 respondents (100%) who live with their spouse and family in Malaysia. The participants included 103 (74.1%) male and 36 (25.9%) female. Most of respondents were aged between 31 and 50 years old (65.5%). The majority of respondents came from the United Kingdom 24 (17.3%); India 18 (12.9%); USA 10 (7.2%) and 48 (62.6%) from other countries. Out of 139, only one respondent was divorced (0.7%) and 138 were married (99.3%). For education levels, on average, respondents have a Master’s degree 56 (40.3%) and Bachelor’s degree 54 (38.8%) which reflects on a higher percentage of professional positions in this study 54 (38.8%). Of the sample, 50 participants (36.0%) have been working with the company for two to five years and their length of assignment in Malaysia was between two and five years, 76 (54.75%). In terms of previous experience, 55 participants (39.6%) have between two and four years previous experience and 22 participants (15.8%) have between five to seven years of previous experience.

As shown in Table 1, the findings indicate the descriptive statistics and reliability coefficients for sample size, n=139.

In addition, as can be seen in Table 2, a multiple linear regression analysis was conducted to test the hypotheses.

Table 2 presents the results of the multiple regression analyses. As can be seen, only one dimension of expatriate adjustment is positively significant to task performance namely, general adjustment whereas, interaction adjustment shows a negative relationship but is statistically significant. In other words, the interaction adjustment would be reduced when the level of task performance is high. The correlation value (R) in this model is 0.444. The percentage of variance explained, R square is 19.7%, with the adjusted R square is 17.3%. The F value is 8.206 with a significance F value of 0.000. This model is significant as p<0.05. Thus, the general adjustment significantly influences task performance. This study indicates that there is no problem with auto-correlation because Durbin-Watson value is 1.660, which is still in the acceptance range (1.5 to 2.5). Therefore, only hypotheses 1 (a) is supported.

Callaway, S.K. (2017). How the Principles of the Sharing Economy Can Improve Organizational Performance of the US Public School System. International Journal of Public Policy & Administration Research, 4(1), 1-11.

Kraimer, M.L., & Wayne, S.J. (2004). An examination of perceived organizational support as a multidimensional construct in the context of an expatriate assignment. Journal of Management, 30(2), 209-237.

Odhiambo, J.A. (2018). Support Services Available for Kenyan Learners with Cerebral Palsy in Aid of the Performance of Activities of Daily Living. American Journal of Education & Learning, 3(2), 64-71.

Wojtczuk-Turek, A. (2017). In search of key HR practices for improvement of productivity of employees in the KIBS sector. Contemporary Economics, 11(1), 5-16.